This 8-shot rimfire revolver is a workhorse of a wheelgun 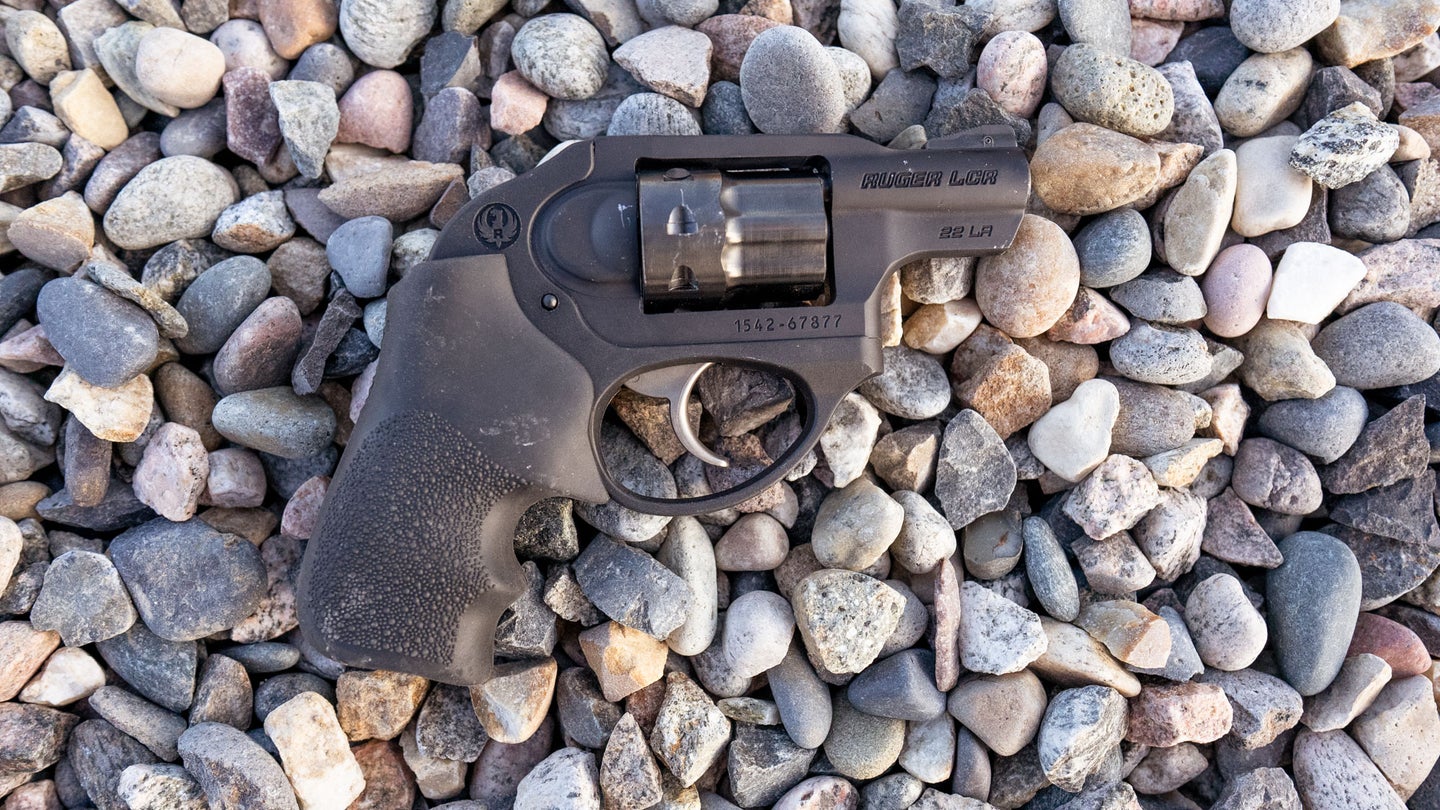 The Ruger LCR .22 LR is a compact and rugged revolver that weighs less than a pound. John B. Snow
SHARE

Ruger has a long history building rimfire handguns—so the Ruger LCR .22 LR has a lot of company. The first firearm to bear the Sturm-Ruger name was the Mark I autoloading pistol, which rolled off Ruger’s production line—then a small shop in Southport, Conn., with barely a dozen workers—in 1949.

In 2009, 60 years (and millions of firearms) after that landmark event, the company introduced the Ruger LCR, a double-action revolver with a concealed hammer. Now, the LCR—which stands for light compact revolver—wasn’t designed exclusively as a rimfire platform. Its main purpose was to be a deep-carry or backup gun and is therefore chambered in a variety of self-defense rounds including .38 Spl., .357 Mag., .327 Fed., and 9mm. All those hold five rounds, except for the .327 Fed. LCR, which can carry six.

But the Ruger LCR’s light weight, wallet-friendly price, and durable design lent itself well to the humble .22 LR and, for a time, to the .22 WMR. (Ruger isn’t currently producing the LCR in the .22 Win. Mag. rimfire.)

The most innovative feature of the Ruger LCR is the blending of polymer, aluminum, and steel in its construction. The cylinder is steel as is the barrel, which is a sleeve contained within the frame. The frame is made of aluminum and encompasses the cylinder and barrel in a box-like fashion. What would normally be the lower part of the frame where the trigger, mainspring, and hammer are located and where the grip attaches is made of polymer. Ruger labels this plastic component as the fire-control housing, which is as good a description as any.

This hybrid construction has the benefit of keeping the weight and cost of the revolver down. The tradeoff is that the pistol isn’t very elegant. It lacks the clean lines of the Smith & Wesson 43C, for instance, which is also an 8-shot .22LR with a concealed hammer. Utilitarian is the word that comes to mind with the Ruger LCR.

The other major innovation with the Ruger LCR is the trigger. Ruger incorporates what they call a friction-reducing cam in the fire control system whose purpose is to give the revolver a smooth, even pull through the entire movement of the trigger. Some revolvers have a noticeable amount of stack where the effort to move the trigger rearward increases during the trigger pull.

On the Ruger LCR it works as advertised. While the pull weight on my sample isn’t light, it is smooth and even, with no catching or changes to the resistance felt when running the gun. One thing revolver fans might notice when dry-firing the LCR is the minimal feedback from the revolver’s timing sequence. With most wheelguns, the shooter can hear and feel the inner workings as the cylinder rotates and locks and as the hammer moves to the rear. With the LCR you can hardly detect any of that, which is one way you can tell the trigger is not the standard fare.

The main purpose of the Ruger LCR, and similar revolvers, is to be carried. And one of the biggest detriments to carry is bulk and weight. My sample tips the scales at 14.4 oz. That’s 3 ounces heavier than my S&W 43C, but the same weight as my S&W J-Frame .38 Spl.+P, which I carry all the time.

One way Ruger reduced the weight of the LCR is via the contour of the cylinder, which tapers to a thinner diameter on its forward half. This is particularly noticeable when you view the revolver from the side. The gap between the fluted portion of the cylinder and the frame is quite pronounced.

The top strap tapers from .447 inches wide at the front to .580 inches at the rear which also results in some weight savings. Off the top of my head, I can’t think of any other revolver that has a top strap designed that way.

Despite the obvious effort to reduce the Ruger LCR’s weight, the ejector rod is contained within a shroud formed by the aluminum frame. Though the extra material adds mass to the LCR, it protects the ejector rod and augments the revolver’s blocky profile.

At less than a pound, the Ruger LCR is comfortable to carry and haul around, whether in a holster on your hip, tucked into a pocket or stashed in your pack or bino harness.

The cylinder latch on the Ruger LCR operates by pressing it straight into the side of the frame, which releases the cylinder and allows you to load the gun.

The smooth trigger pull on the LCR makes it easy to keep the sights aligned. The front sight is a standard ramp with serrations and a white stripe on it. The sight is held in place by a roll pin and can be swapped for another type if you like. The rear sight is a square notch machined into the aluminum frame. The polymer trigger housing also has a notch that sits just below the notch in the aluminum frame. The sights are fixed and can’t be adjusted for elevation or windage unless you take a file to them, so dialing in the LCR’s accuracy for distant targets isn’t in the cards.

Hitting targets at long range isn’t the Ruger LCR’s purpose, however, and I found the fixed sights to be plenty adequate when running drills at 3, 5, 7, and 10 yards. I could make hits beyond that distance, but the LCR’s short sight radius means you have to shoot slowly and deliberately in order to plink effectively at longer ranges.

On close targets, though, the LCR runs like a champ. Getting all eight shots on target quickly was not difficult at 7 yards and in. Managing the recoil of the .22 LR wasn’t an issue and, according to Ruger, the polymer trigger housing helps in that regard by absorbing recoil. (Though shooters might be a little concerned to see the flex and bend of the gun when shooting larger cartridges if it were filmed with a high-speed camera while recoiling.)

Every so often during my shooting—and I put several hundred rounds through the revolver—I’d come across a dud round. But unlike with an autoloader where you have to execute a failure drill, with the LCR you just pull the trigger again and you’re back in business. I didn’t tabulate how often this occurred, but it was certainly less than 5 percent of the time and mostly occurred with cheap ammo.

The Ruger LCR ejects spent brass in a positive fashion with little effort. Even empties from hotter .22 LR loads didn’t stick in the cylinder, which you sometimes see.

The Ruger LCR comes with a generously sized Hogue grip that is fairly wide across the middle and has two deep finger grooves and grip panels with pebbled texture. The geometry and construction of the grip lets you lock the revolver firmly in place when you clamp down on it with your hands. The pinky finger on the strong hand rides beneath the grip, but you get more than enough support from the middle and ring fingers.

To change out the grip, all you have to do is unscrew the fastener underneath the grip. You can use a thin-bladed slot head screwdriver or a Torx T-10 bit for this.

The takedown procedure for the revolver involves removing just two screws, one being the fastener that holds the grip in place I mentioned above, while the other is on the front side of the frame just above the trigger guard and in line with the bottom of the crane. As with the grip screw, the one on the frame takes a Torx T-10 driver.

With those fasteners removed the grip slides off the trigger housing and the cylinder and crane pop free from the aluminum frame. This is all you’ll need to do for basic maintenance on the LCR, but if you want (or need) to take the gun apart further it isn’t too complicated.

The front portion of the ejector rod can be unscrewed (it has a reverse thread, by the way) to free the extractor. And there’s a pin you can drift out on the frame that holds the trigger housing in place. With the trigging housing and frame separated you can access all the bits and pieces of the trigger assembly, though you will need to use a paperclip to keep the mainspring compressed for a full disassembly.

What the Ruger LCR .22 LR Does Well

While the .22 LR isn’t usually a top pick for self-defense, when loaded with something like Federal Premium Punch it is surprisingly potent. By virtue of holding eight rounds in a compact, easy-to-carry and easy-to-shoot platform, the Ruger LCR .22 LR qualifies as a good backup or deep-concealment self-defense gun.

It’s also handy as an outdoorsman’s gun for dealing with snakes, pests, and other critters that need shooting.

It’s also a good revolver to train with if you carry a similar style handgun in a larger cartridge. I don’t know how much shooting you’d need to do to recoup the cost of the .22 LR LCR, but at some point you’ll be money ahead by training with the rimfire, and you’ll certainly be a better shot if your training regimen is any good.

Where the Ruger LCR Falls Short

I think the main complaint about the Ruger LCR is its aesthetics. In the world of pocket pistols, we’ve had some real beauties. The Colt Detective Special and the Smith & Wesson Chiefs Special when equipped with bobbed hammers are both lovely and functional. The Ruger LCR doesn’t have the same kind of elegance—but it is functional.

There’s never been a rimfire revolver that isn’t fun to shoot. And the Ruger LCR .22 LR is certainly a lot of fun. It’s well made and durable and built to digest rimfire ammo by the brick. It can hold its own in a personal protection capacity and qualifies in every sense as a “real gun” for someone who doesn’t want—or need—something more potent than a .22 LR.