The LeMat fires a .42-caliber bullet from a rifled barrel, and 20-gauge from a second barrel below 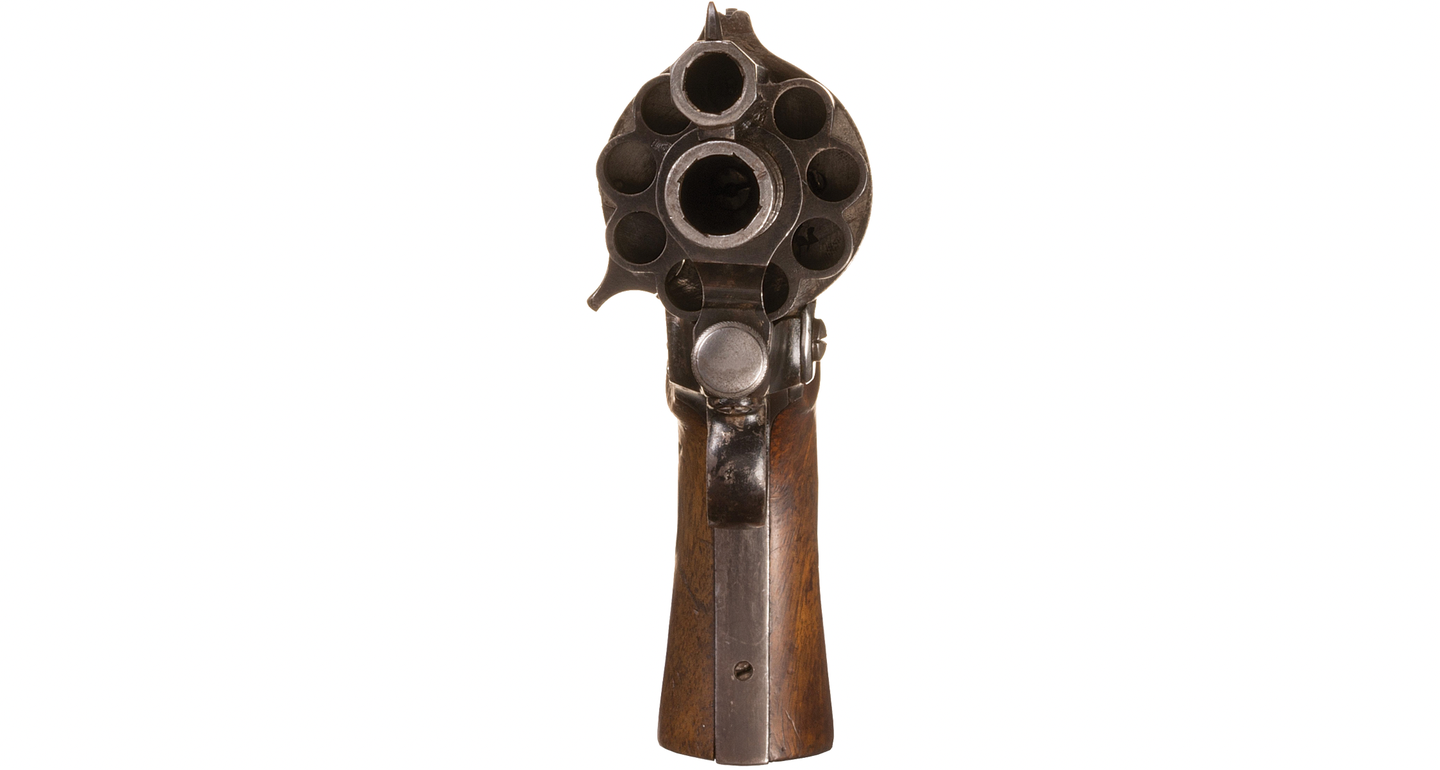 A head on look at the LeMat's double barrels. Rock Island Auction
SHARE

By the start of the Civil War, repeating firearms were growing in popularity. Many, such as the Henry Repeating Rifle, were not adopted en masse during the war. However, with the advent of revolvers there was a rise in the sidearms soldiers and officers carried. Revolvers were made by several companies during the war and came in many shapes and sizes, including one that added a shotgun barrel underneath the cylinder, known as the LeMat Revolver. It was not the most popular on the battlefield but was one of the strangest.

If you haven’t seen the LeMat revolver before, you may think it looks quite odd. However, it is a part of a long lineage of weird looking repeating firearms that began centuries prior. The idea of a repeating firearm dates to the first handgun, known as a hand cannon. It was primarily a citizen-owned piece, not often meant for war. With the advent of easy-to-produce and more reliable repeaters, the military eventually caught on. The earliest revolver pre-dates Samuel Colt, even though Colt is the one most associated with its successful creation. Once Colt patented his revolver in 1835 (England) and in 1836 (United States), he held the exclusive rights to create that type of firearm. Many designers and companies waited in the wings for the patents to expire in the 1850s, years before the Civil War began. Once it had, major manufacturers such as Smith & Wesson and Remington got into the revolver market.

A lesser-known designer, Jean Alexandre LeMat—a Frenchman living in New Orleans—sought to create a revolver that diverted from the traditional and could be used as a multi-purpose firearm on the battlefield. Prior to the popularization of revolvers and other repeaters, citizens and the military alike often sought combination weapons. Considering single shot firearms were slow to load and most were without rifling thus not very accurate, people explored the possibilities of adding blades, axes, and even brass knuckles to their guns to have a backup in a close-quarter combat situation. These weapons had varying levels of success.

Beyond the realm of self-defense was a tradition of hunting that combined rifles and shotguns into one firearm. The most notable historic example is known as the drilling. The drilling though was the opposite of a LeMat, typically featuring a double barrel shotgun with a single rifled barrel below, creating an upside-down triangle. These long guns, popular in Europe, served as hunting arms. The LeMat, however, married a legacy of repeating and multi-purpose arms to create, what he had hoped, would be the ultimate side arm of the military.

The LeMat was designed in 1855 (patent received in 1856). The original percussion handgun fired nine shots from a revolving cylinder and one grapeshot from a shotgun barrel underneath. It was chambered in .42 and .63 (around 20-gauge) calibers and had a 6.75-inch barrel. The user of this pistol was able to switch between revolver and shotgun using a pivoting striker on the hammer. In addition to the barrels and cylinder, it also had a ramrod attached on the right side of the frame. LeMat eventually made several variations including the Baby LeMat, in .32-caliber with a 4.5-inch barrel and a rifled, rather than smoothbore, center barrel.

The LeMat’s minimal use during the Civil War was in the hands of the Confederacy. Initial intentions were to market it to the U.S. Army, partnering with LeMat’s wife’s cousin Major P.G.T. Beauregard. Beauregard, a respected army officer, did ultimately switch sides to fight for the Confederacy. LeMat had a contract to make his gun for the Confederate states. However, he was plagued by a common issue in the South, a lack of production capability. As a result, LeMat sought manufacturing outside of the United States. In total, just under 3,000 LeMat revolvers were produced between 1856 and 1865.

Obviously, the LeMat revolver was not as successful as the namesake would have hoped. A small contract coupled with difficulties in manufacturing led to a downfall of the firearm. But what about its design? Was this gun meant for greater things if the world and war hadn’t stood in the way? The answer is probably no. First, it was clunky. Often, when firearms try to take on multiple roles or features, accuracy and efficiency suffer. According to some historic primary sources, the gun was not very accurate at distance. While powerful, it was better served in a close-quarter combat situation. It was also expensive to produce, which is never ideal. Additionally, the loading process with the utilization of a ramrod was not convenient, especially considering the development of rear loading cylinders around the same time. In the end, the gun could not overcome flaws and was ill-timed as advanced technology would quickly soon surpass it.

Read Next: 7 of the Worst Military Weapons You’ve Probably Never Heard Of

Many firearms that do not see immense success become a forgotten chapter in history. Others become highly collectible. Fewer production numbers may be unflattering at the time of an invention, but it makes the guns rare. And people love getting their hands on something many cannot acquire. The rarity, coupled with the novelty, drives the price of the firearm up on the secondary market. LeMats only continue to attract the attention of collectors with basic models worth between $12,000 to $15,000; cased versions can fetch over $20,000.

However, if you’re unable to acquire or afford the original, reproductions are available from Pietta and EMF Company. And at least with reproductions, you have a better opportunity to fire the gun.