Pocket Pistols are the easiest handguns to carry, but they're difficult to shoot well. Here's how to select and train with a pocket-sized handgun 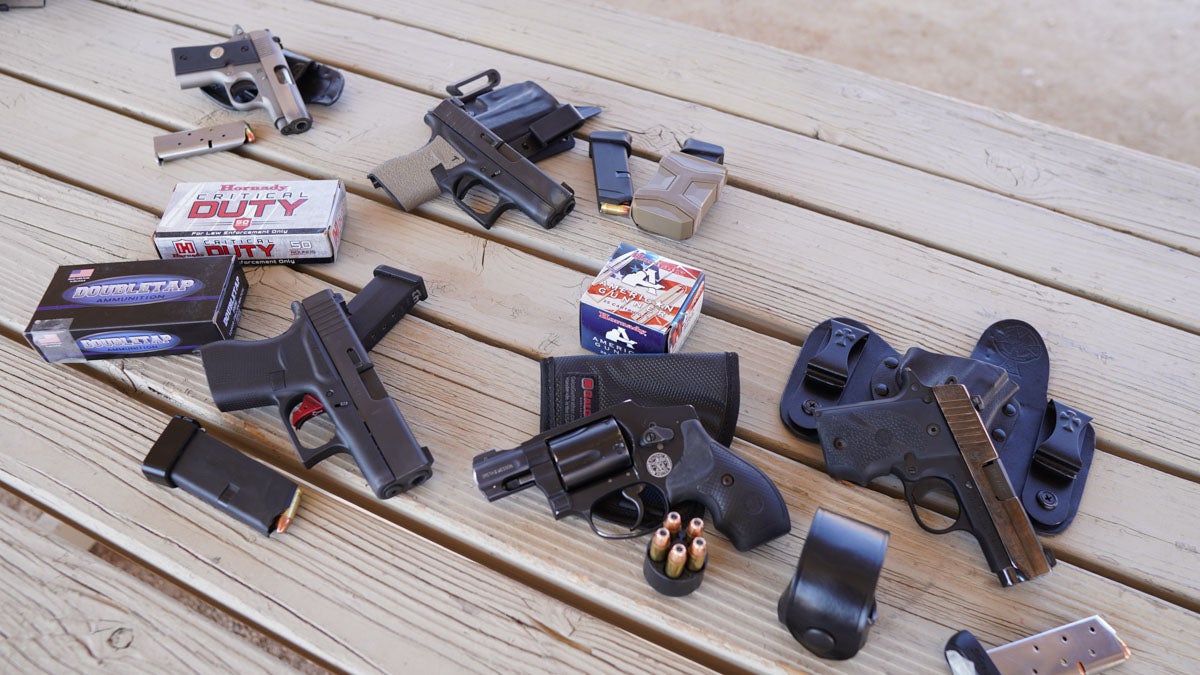 A selection of pocket pistols used during a recent class at Gunsite Academy. Matt Foster
SHARE

While micro compact pistols are often derided as ineffective or inadequate for self-defense, it’s also the case that the best gun for self-defense is the one you have with you. That’s almost the entire point of a pocket pistol. They’re so small and light that you can literally drop one into your pocket, with a decent holster of course, and have it with you at all times. But the same features that make it easy to carry also present some problems.

So what defines a pocket pistol? Well, aside from the self-defining moniker, they’re usually micro compact handguns chambered in .22 LR, .25 ACP, .32 ACP, .380 ACP, and sometimes even 9mm. There are some funky exceptions, like Derringers chambered in ridiculous cartridges, but mostly the mouse guns are chambered in the smaller cartridges, with the exception being revolvers in .327 Federal, .38 Spl. or .357 Mag.

I’ll admit, I’m not the definitive pistolero by any means, but because of their convenience to carry, I rely on pocket pistols the majority of the time. When carrying concealed, I often take my Smith & Wesson M&P 340 Scandium J Frame. It’s light, comfortable to carry, packs a punch with its .38 Spl. +Ps and is relatively ambidextrous, which is good because I shoot left-handed. But I’ll also admit that it’s the gun I probably like to practice with the least because it beats the crap out of me. More on that later.

There’s no sense carrying a handgun if you’re not going to be proficient with it. I recently decided to improve my defensive handgun skills through Gunsite Academy’s Pocket Pistol class, which seemed like a perfect opportunity to become better with the diminutive guns I tend to carry.

If you’re not familiar with Gunsite, suffice to say is one of the world’s preeminent defensive firearms training centers. I won’t go on too much into Gunsite itself, but it’s an amazing place with great people, instructors, staff, and students alike. Being around other people as dedicated to improving their proficiency with firearms definitely fosters an environment of belonging and camaraderie.

It would be easy for a training center that hosts real tactical professionals to be dismissive of pocket pistols. That’s not the case though. Our class instructor Ed Head, who has extensive law enforcement and even some gunfighting experience, bestowed plenty of real-world wisdom about pocket pistols, which are often derided for their anemic cartridges. Though there were only a few of us, our class had a variety of pocket pistols including a Sig P238, Colt Mustang, Glock 42, and my S&W Scandium J Frame.

The Gunsite Pocket Pistol class focuses on becoming more familiar and proficient with your pocket pistol, as well as teaching about what it can and cannot do. It is not tactics class, nor does it focus on carry methods so much. It was about getting repetitions with your handgun. We shot targets farther than anticipated—out to 25 yards—showing that micro-compact pistols are more capable than one would think. But this also demonstrated the platform’s limitations. Here’s some of what our class learned, and anyone carrying a pocket pistol would do well to consider these subjects.

Does a Pocket Pistol Have to Be In a Pocket?

Immediately one thing became apparent: Drawing from a pocket holster repeatedly kind of sucks. You spend most of the time looking like a literal clown with your pant pocket turned inside out. A pocket holster only has two advantages. It’s easy to “put on” and carry a gun and if you stand around like a mope with your hands in your pocket like I do sometimes, your hand can be on your gun ready to draw quickly. But if you don’t have your hand already in your pocket, getting your hand inside your pocket and drawing with any speed just isn’t going to happen.

An outside the waistband (OWB) holster is recommended for the class, and even though these are “pocket pistols” it’s probably a good way to carry these little guns in general. That was a sobering lesson for me. I will be getting inside and/or outside the waistband holsters for all my carry guns. Will I sometimes still carry in the pocket? Absolutely. But where it’s just as easy, I’ll strapped on a holster.

Size Does, In Fact, Matter

The small size of pocket pistols is fantastic for carrying. They don’t poke you as much and they’re light. But a small gun equals small controls that can be difficult to manipulate under time limits or stress. Slides are smaller and more difficult to grab and rack, safeties and mag release buttons can be tiny and even the sights can be that much smaller.

Working with these small guns is more difficult to do quickly and efficiently than it is with their larger counterparts. Our instructor pointed this out on day one. The lesson? Spend a lot of time with your mouse gun. Not just shooting it, but reloading, manipulating the safety, clearing malfunctions, etc. Build muscle memory for the smaller controls.

In most cases physics rears its ugly head. In this case a shorter slide equals a shorter sight radius, which means more difficulty shooting accurately. But is that really an issue for the distances encountered in most self-defense situations? In general, no. The class had students shoot longer distances, out to 25 yards on steel targets and hits were surprisingly consistent. Obviously, the majority of the class was done with much closer targets, but it was good to see that with some practice the mouse guns have more reach than one might think.

Time in the classroom was also part of the course with some valuable information about mindset, some technical aspects of concealed carry, and Q&A sessions. The variety of drills and exercises really hammered home good pistol shooting fundamentals as well as working on building the muscle memory for all of the control manipulations. Variety is something to work into your training routine if possible.

The Gunsite course is a dichotomy. One on hand the course shows that with regular practice pocket pistols are capable of self-defense at well beyond knife-fighting distance if required. On the other, the very thing that makes them so convenient—their small size—inherently imposes serious limitations. The class will make you think about your choice of handgun, the ammo you use, and how best to train. My Scandium frame M&P 340 beat the crap out of me with .38 Spl. +P loads so badly that I wasn’t able to finish the class with it. I ended up swapping back and forth with a Glock 43 I borrowed to give my hand a much-need break. Another takeaway is that regardless of the “pocket pistol” moniker, that’s not the best way to carry these handguns. Are pocket pistols the preferred sidearm if all things are equal? Of course not. Is there a place for them in a self-defense role and arsenal? Absolutely. While their size results in diminished capacity and effective range, with some training and proper carrying setup it is far superior to not being armed at all.

There are plenty of options when it comes to pocket pistols, but here are four models worth a look. None will break the bank, and all have a reputation for reliability.

Smith & Wesson J Frame: Available in models with steel, aluminum, or Scandium frames (such as my M&P 340). And even though they’re not the newest hotness, they’re still popular because they work. They can be had in .357 Mag. if you’re feeling masochistic or .38 Spl. +P and even .22 LR. What they lack in capacity they make up for in simplicity and reliability.

Ruger LCP Max: The Ruger LCP helped make semiauto .380 pocket pistols mainstream when it was introduced in 2008. The LCP Max is an evolution of the original design and the LCP II with increased capacity in the same overall footprint as the original LCP and the slide is dovetailed to except steel sights and comes with a tritium from sight. Like the original LCP, the LCP Max fits comfortably in the front pant pocket.

Glock 42: If you want a pocket pistol, are a Glock fan and like all your pistols to look pretty much the same, then the Glock 42 is your Huckleberry. If you were looking at a picture without any reference for size it would look like every other Glock. All kidding aside, it’s going to bring Glock ergonomics and reliability to the party in a smaller and pocketable package.

Sig Sauer P365-380:  The Sig 365-380 is probably at the upper end (in terms of size) of what qualifies as a pocket pistol, but it’s a solid design that is optics ready, which is becoming popular on concealed carry pistols. It also comes with Siglite night sights. It will fit in the 9mm Sig 365 holsters because it’s the same size. Why get it in .380 then? Because they lightened it bit and it is softer shooting.

You might be asking, “but if it’s a micro compact pistol that goes in my pocket, do I really need a holster?” Yes! Undeniably yes. Do you carry a full-size gun stuck in your waist band without a holster? No? Likewise using a holster with a pocket pistol will keep the gun properly oriented making it easier and safer to draw. It will also help the gun “print” less in your pocket. Here are some great options, but there are a lot of holsters to choose from. The three listed below represent three different styles, molded plastic, leather and a foam/cloth laminate. It doesn’t matter which style you use as long as it works for you—and that you train with it. That’s all that matters.

Safariland Model 25: I’ve used their Model 25 for both a J Frame and S&W Bodyguard and they work great. It’s made of a hard molded plastic interior with a synthetic sued material on the outside. I’ve never had an issue with the holster coming out with the gun, and because it holds its shape, reholstering is easy.

Galco Pocket Protector: Known for fine leather work, Galco makes premium holsters. The Pocket Protector Holster has Galco’s quality at an affordable price. It’s a perfect complement to any pocket pistol. Made from leather with a metal reinforced mouth, it it’s easy to draw from, stays in the pocket and you can actually get the gun back in the holster without taking removing the holster from your pocket.

DeSantis Nemesis: The Nemesis is a great example of the foam/cloth laminate style of pocket holster. The foam sandwiched between two layers of different cloth materials helps to break up the outline of the gun in your pocket and helps the holster keep its shape. The outside of the Nemesis is made from a slightly rubberized fabric that sort of sticks to cloth. This holster not only stays put when drawing the pistol, but it helps keep the pistol from shifting around in your pocket.