The popular LCP pocket pistol gets an upgrade 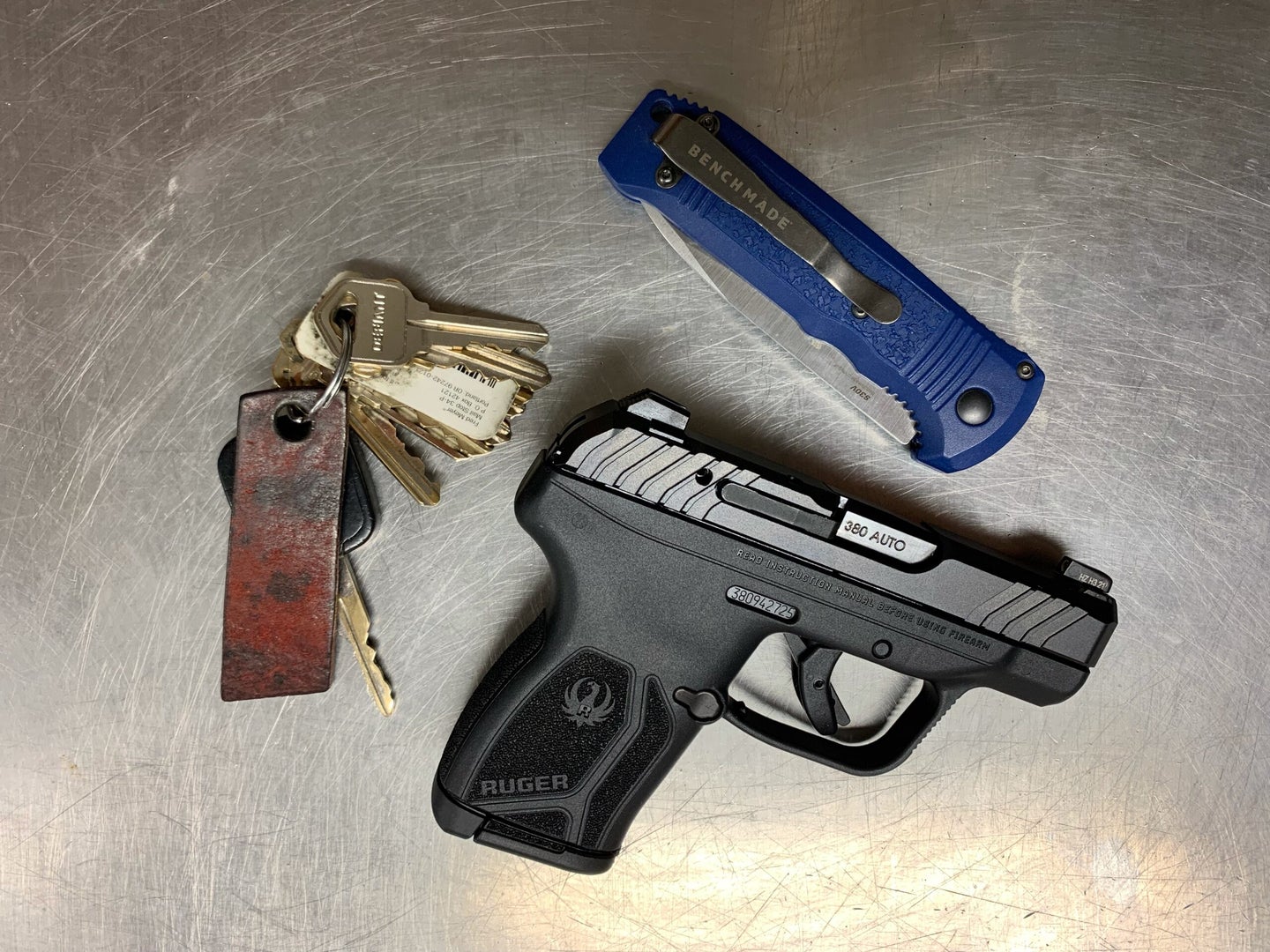 Pocket pistols might be trendy, but they’re definitely not new. In fact, what we could consider modern, semi-automatic pocket pistols have been around for more than 100 years. The first decade of the 20th century produced several popular models in .25 auto, including the FN model 1905 and the Colt model 1908. The application and practical value of the pocket pistol is every bit as relevant today, and probably the most notable model of the past several decades is the Ruger LCP, chambered in .380 ACP.

Everyone who’s ever heard of a pocket pistol would recognize one. The Ruger LCP’s ultra-thin, compact build and its highly regarded reliability—plus advancements in ammunition that bring the .380 into the realm of realistic self-defense cartridges—all worked to make the pistol a fantastic success. Ruger wasn’t satisfied to stop there though. They have kept improving the platform, introducing the Ruger LCP II, and this year, the LCP MAX.

The LCP MAX builds upon an already solid pocket-pistol platform, and it follows a contemporary trend of maximizing ammunition capacity. The original LCP’s magazine held 6 rounds, with the option of using a 7-round extended magazine. The LCP MAX ships with a 10-round magazine, and you can buy slightly extended 12-round magazine, giving a total capacity of 11 to 13 rounds. That’s nearly as much as many full-size 9mm pistols. The 12-round magazine does not ship with the pistol, and must be bought separately. If you choose to buy it, it will also give you a bit more real estate for your grip and can improve comfort and shootability for some users. The Ruger LCP MAX’s magazine is a tapered double-to-single stack magazine, meaning that the lower portion of the magazine is double stack, then tapers down to the profile of a straight single-stack magazine for roughly the last inch below the feed lips. This allows the slide to maintain an ultra-thin, low profile, at only .81 inches thick.

To be fair, that dimension is only at the rearmost cocking “ears.” Most of the slide is .755 inches wide according to my calipers, which is virtually the same as the LCP II. As expected, the fattest portion of the whole pistol is the grip, due to the larger capacity. Even that though, measures at about .935 inches at its thickest point, which is less than many micro-compact single-stack 9mms. It usually doesn’t make sense to get too hung up on the numbers (it’s not worth obsessing over thousandths-of-an-inch in thickness), but the engineering required to pack 11 rounds into a platform this tiny is impressive. I’m not sure that another .380 on the market with the same capacity can beat it for compactness.

The alloy steel slide is machined down to pretty minimum dimensions, and features aggressive cocking serrations on the front and rear, with those “cocking ears” on the very back end of the slide. The serrations are actually more like ribs than serrations, with wide grooves between them, which allows better skin contact to aid your grip than serrations that are tightly spaced. Tiny semi-automatic handguns can sometimes be a little slippery and difficult to manipulate for users with larger hands, so this much purchase is a welcome sight.

The slide also features a tritium front sight with a white dot outline, and a U-shaped rear sight that is adjustable for windage. The dovetail in the slide is also cut to accept any standard bodyguard rear sights if you wish to go aftermarket. It’s also interesting to note that unlike many pistols, the ejector is actually part of the slide-stop, rather than a separate part that sits in the frame. The increased capacity is the most notable change from the Ruger LCP II, and like the LCP II, it is an internal hammer-fired pistol (not striker). Although it looks like a striker-fired pistol, the hammer sits in the grip and is recessed below the slide, which helps to streamline the pistol and keep the slide assembly parts at a minimum. In addition to the 10-round magazine, the pistol ships with a soft pocket holster. It’s a compact package that’s comfortable to carry in a variety of manners and locations.

Bells, whistles, numbers, and compactness don’t do any good if a gun isn’t reliable—especially a self-defense gun. Ruger is known for the dependability of their firearms, and I would have been disappointed if this pistol had given me problems. It didn’t. For this Ruger LCP review, I fired 300 rounds through the gun without cleaning it, and I didn’t have a single malfunction. I used three different types of ammunition, hand-loaded 90 grain FMJ, loaded with mixed brand range-collected brass, as well as hand-loaded 90 grain hollowpoint ammunition. I also ran through a couple boxes of Barnes Tac-XPD 80-grain hollowpoints without issue. The manual for this pistol does note that you’re not supposed to use high pressure or +p loads, likely because many of the components are minimalistic, including a paper-thin barrel and chamber. With normal ammunition, however, you have nothing to be concerned about.

I repeatedly ran through several drills while shooting this pistol to really get a feel for its handling and performance in practical applications. Multiple targets and varying ranges, target transitions, and starting from low ready, high ready, and concealed positions. I also went through some basic malfunction drills, as some of these small pistols can be a pain to manipulate in a hurry.

The best pocket pistols aren’t precision shooting instruments, and I didn’t accuracy-test for that. I did all my shooting on USPSA target faces and had no problem maintaining A-zone hits at ranges out to 45 feet. I did notice that similar to some other ultra-compact pistols, the sights seem to be designed to give an impact directly on the front dot, not on top of it. This might seem like it shoots low to someone who is used to using a lollipop 6 o’clock hold. You may not be shooting the hairs off a gnat’s ass at 50 yards, but cover the spot you want to hit with that front sight and it’ll go there.

Despite the short grip, it was quite comfortable to shoot, and although the recoil had a bit of a snappy feel, the gun was extremely stable, and it felt as if the sights never left the line of sight, still being in place on the target when the gun returned into battery with the next round. Even considering its small size, the pistol is very manageable to shoot quickly and accurately. I was only able to fit my two middle fingers on the grip with the factory-shipped magazine, but with the available aftermarket 12-round mag, many shooters will also be able to fit their pinky. The trigger on the Ruger LCP isn’t what I would call double-action, as it’s not cocking the hammer as you pull, but it has the feel of a two-stage rifle trigger, with a central safety lever, a soft, long take-up, and a shorter break. I would like to see a little more crispness in it, but for the gun’s intended purpose, it’s not a bad trigger.

What the LCP Max Does Best

The best thing the LCP MAX does is exactly what it’s intended to do: hide. Even with the 60% increase in capacity, the profile and thickness of this pistol truly allow it to maintain its “pocket pistol” status, and be an excellent concealed carry pistol.

It’s reliable. Despite its tiny stature, this pistol chews them up and spits them out. Even with a looser grip, I was unable to make the pistol malfunction over 300 rounds of shooting with a variety of ammunition.

What the LCP Max Does Worst

The only performance or function-related issue I noticed was that the slide did not reliably lock-open on the last round fired. Perhaps it’s not intended to, though. On Ruger’s website, the product features description of the LCP II states that it’s designed to lock the slide back upon firing the last round, but this is not stated about the LCP MAX. It’s not a deal breaker for me either way, but it was the only area of function where I didn’t see absolute consistency.

The trigger-pull on the LCP MAX leaves a bit to be desired, it’s not what I would call a double-action trigger, but it feels more like a two-stage rifle trigger with some creep in the second stage. The reset is OK, and for what it is, we can’t reasonably expect an ultra-crisp match trigger. For the intended application of this pistol, this is an inconsequential gripe, but worth pointing out.

There will always be a balance when it comes to size and capacity for pocket pistols, but I think that Ruger has done really well to squeeze as much as they can possibly get out of the LCP platform, while keeping its edge as an ultra-comfortable and user-friendly pocket peashooter. Some might poo-poo the .380 as just that, a peashooter, but it fills a very relevant niche in the self-defense world today. With good ammunition, the increased capacity of this platform makes for a very practical defense handgun for many applications. It’s comfortable to shoot and can be carried in a wide variety of circumstances. The gun you have on you is better than the one you don’t, and that’s the real utility of the Ruger LCP Max.