Do You Really Need to Break in a New Rifle Barrel?

The old process of breaking in a barrel is unnecessary. But there are some things you need to know about "barrel break-in" and rifle accuracy 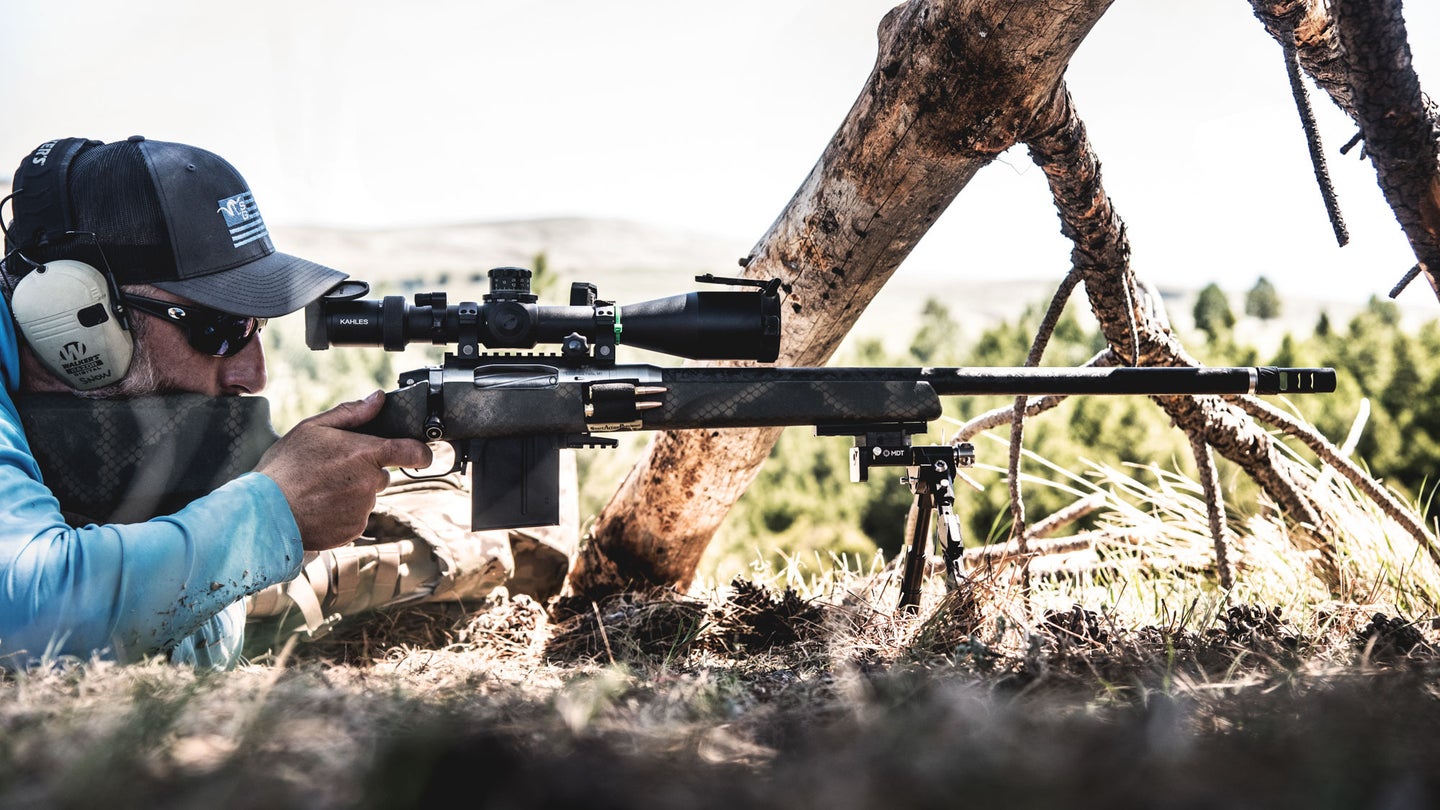 There are good reasons to "break-in" a barrel. But they're probably not what you think. John B. Snow
SHARE

You just bought a new rifle—or maybe had a new barrel installed on an old gun—and are about to head to the range. As much as you want to put a bunch of rounds through it, there’s a little voice in your ear urging caution: Be sure to break in the barrel first!

Chances are you’ve heard this warning from the guy behind the gun counter, or your buddy who’s a ballistic know-it-all, or perhaps from the maker of the barrel or rifle itself—they often include instructions on barrel break-in.

One thing that each of these sources of information have in common is that none of them will agree on how to break in a barrel. And that’s your first clue that maybe there’s something fishy about the whole notion.

Taking this one step further, if you ask these folks to explain what barrel break-in means, you’ll get even less coherent information—assuming you don’t get a panicked look from your expert as they struggle to define the term, let alone explain the benefit of the process.

Breaking in a barrel means different things to different people. But the general notion is that by putting a limited number of shots through a new barrel, while pausing to clean the barrel at specific intervals, a shooter is setting the stage for the rifle to shoot better over its lifespan.

When I was first introduced to the concept some decades ago, the explanation given to me was that the first shots through a barrel would smooth out imperfections in the bore left by the tooling that was used to cut the chamber and impart the rifling in the bore. But you also needed to clean the barrel frequently to begin with so that fouling wouldn’t accumulate too thickly on some of these bumps leading to worse problems down the line. If a smear of copper was allowed to form on one of these rough spots and grow, it would degrade accuracy and would be difficult to remove once it established itself—so the story goes.

Now there are other ways to think about barrel break-in that I’ll get to in a bit, but we’ll focus on this one for the moment.

To break in a barrel according to this way of thinking, you shoot one to three shots and then scrub the barrel with solvent and a bore brush followed by some patches to remove the fouling and dry it out. The most tedious of these methods involves 10 single shots followed by a cleaning after each shot.

You’ll see variations of this technique posted online—but, of course, none of them are the same even though they share the stated goal of smoothing out the interior of the barrel.

As you might have gathered, I’m somewhat skeptical of this theory. I have three reasons for this.

First, the best rifle accuracy comes from high-quality barrels. High-quality barrels, by definition, are manufactured to a more demanding set of criteria, which usually includes some kind of lapping or honing as well as cutting methods that leave a smoother finish—the exact processes that our barrel break-in is supposed to be doing. In other words, a good barrel doesn’t need all that extra effort to shoot well. In contrast, a lesser barrel—one with excessive tooling marks and imperfections—is never going to shoot better than it was made. That toad will never become a prince, no matter how many times you kiss it.

Second, I’ve had many conversations with barrel makers about the break-in procedures they publish and most of them have confessed that the only reason they have a break-in process is because their customers think they need one. Wade Hull at Shilen has come right out and said as much. The general shooter is convinced that a break-in procedure is needed, so the barrel makers have responded by creating them—even if they don’t believe they are necessary.

Third, I’ve tried all these techniques over the years, and I’d be lying if I told you I ever saw a measurable benefit.

If you absolutely insist on a break-in technique, do this.

• Shoot it a bunch more. Clean it at the end of the session.

That’s all you need to do. From there on out, shoot it like you stole it. Clean it when you see the accuracy start to degrade. Depending on the rifle that can be after 20 shots or 200 shots (or more).

Other Kinds of Barrel Break-In

Another way to look at barrel break-in is that a barrel needs a certain number of shots through it before it settles in. Settling in can mean two things. First, that the bullet muzzle velocity stabilizes. Second, that the barrel settles in and realizes its accuracy potential. Both these theories have merit.

As you put rounds through a brand-new barrel your muzzle velocities will increase before hitting a plateau. The amount of increase and the time it takes to hit that plateau vary from one cartridge to the next, but as a rule of thumb a barrel will gain about 75 fps after you put 100 rounds through it. Some barrels and cartridges speed up a lot less, some speed up more. Among my friends who track such things, they report gains as modest as 25 fps to as much as 180 fps. Hotter cartridges like a 300 PRC might realize its velocity gains within the first 50 rounds. Milder cartridges like the .308 Win. and .223 Rem. might take as many as 150 rounds to settle in.

Barrel break-in as it relates to muzzle velocity matters mostly to long-range rifle shooters and handloaders. When I throw a new barrel on one of my competition rifles, for example, I won’t start with any serious load development until the barrel’s speed stabilizes. And unless I’m in a real jam, I’ll never head off to competition with a new barrel that doesn’t have any rounds through it. Otherwise, that barrel will speed up during the match and start to shoot high.

In this example I’m probably okay at 600 yards, but the 6-inch difference at 800 yards would worry me, while the 12-inch delta at 1000 yards and 19-inch delta at 1200 yards means I’m missing. And if the barrel speeds up by 75 fps (a more realistic figure) those differences become more pronounced.

To avoid this, you need to put enough rounds though that barrel beforehand so that the speeds have stabilized, and you have accurate data for your ballistic calculator.

Why Do Barrels Speed Up?

This is a good question and one we don’t have a definitive answer for, as there are different takes on the matter. Two common notions, both of which seem plausible, have to do with changes in the throat of the chamber as the first 100 rounds are fired. One suggestion is that the sharper edges on the first bit of the rifling get worn down so that the bullet encounters less resistance during its initial journey down the bore, leading to increased muzzle velocity. Personally, this is the idea I subscribe to.

The other theory is that the throat starts to develop cracks from the intense heat generated by cartridges and gets rough. This rough patch increases resistance on the bullet, jacking up pressure, which translates to increased velocity.

Either way, barrel speed-up is an observable and verifiable fact.

The other way a barrel can settle in is via its precision on target. In most barrels a certain amount of fouling in the bore will help the gun shoot better. Specifically, we’re talking about the copper fouling from the bullet jacket.

I just screwed a new Proof carbon fiber 6.5 Creedmoor barrel on a rifle of mine and the groups shrank noticeably with each five shots. The first group measured 2.165 inches, group two measured .922 inches, group three measured .640 inches, group four opened to .950 inches (I was a little lazy with my technique here), and then group five shrank to .434 inches.

After that first session I cleaned the rifle, and it has continued to shoot in the .4- to .6-inch range with factory ammo. This data show how the barrel settled in once it was adequately fouled.

One thing to bear in mind is that when you switch to a different bullet it can take a few shots for your barrel to adjust to the new copper composition before it shoots its best. If that first five-shot group is a screamer, good for you. But if you try a new bullet and the group opens up, don’t despair. Put another group or two through the rifle before you judge how well that particular load performs in your gun.

I don’t think it is fair to say that barrel break-in is a myth exactly, because there is something to be said for a barrel settling in with respect to muzzle velocity and accuracy when it is new. But the idea that you have to jump through a bunch of hoops with repeated cleanings in order to correctly break in a barrel doesn’t square with my experience and with what the people who make the barrels say.

To be fair, there’s nothing wrong with following any of those recommended procedures with a new gun. You’re not going to hurt anything. But neither does it seem to help in any way that’s measurable based on my experience and the experience of pretty much every high-level shooter I’ve spoken with about it.