.222 Remington Magnum: A Classic Cartridge That Still Gets It Done on Varmints and Predators

Though past its prime, the .222 Rem. Mag. is still relevant, especially for handloaders who like to fine-tune their ammunition 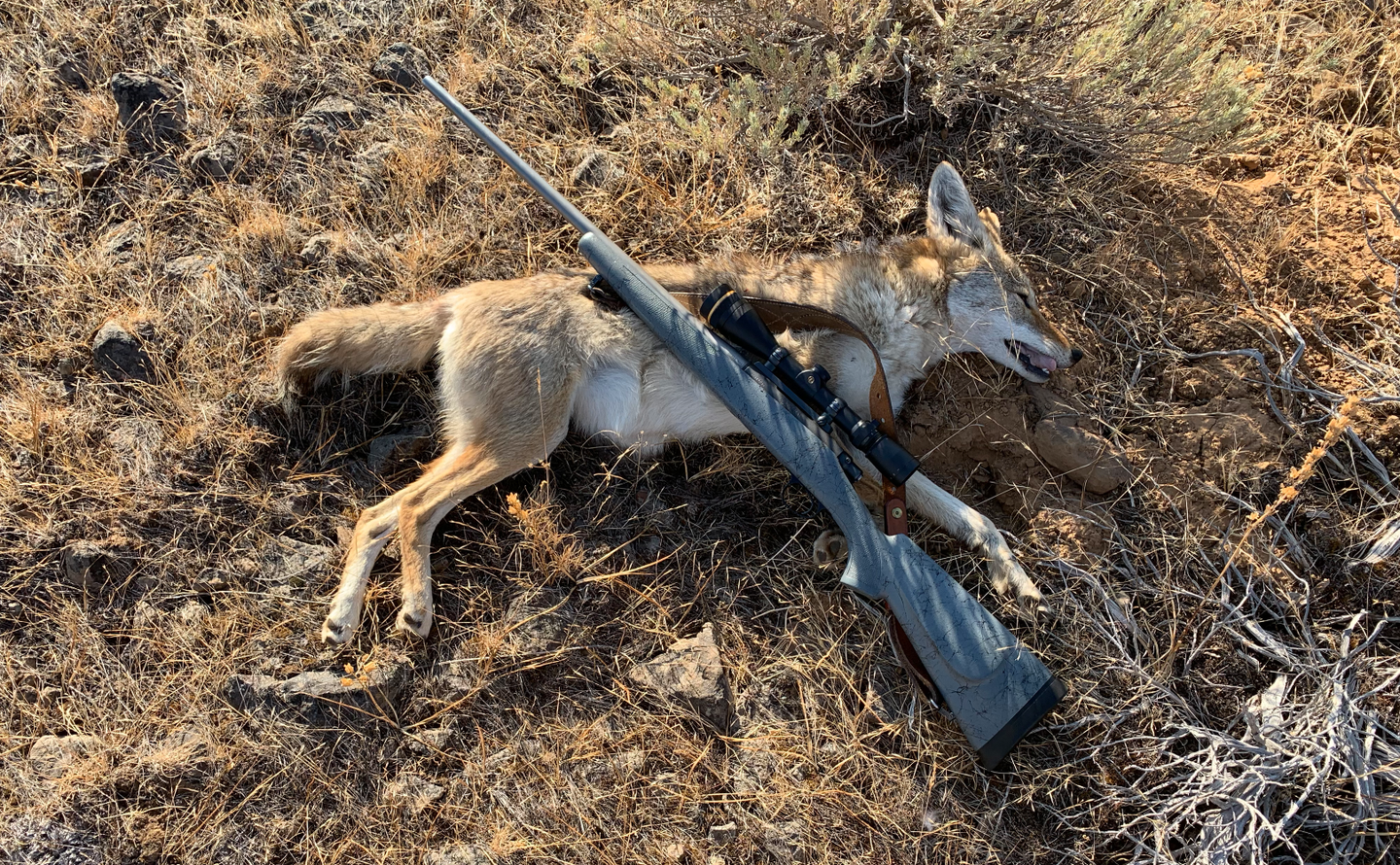 I can’t explain my love for the .222 Remington Magnum except to say that I’ve always liked some things that are a little bit off the beaten path.  Maybe my first thought of the cartridge was in hunters’ education, around 1980.  Pouring over the glossy Remington product catalogs of the day, complete with ballistics charts and sexy photos of the Remington cartridge lineup could have slipped the sear. Maybe it was later, when I started handloading and my erudite uncle who has loaded for nearly every cartridge available, mentioned it. I really don’t know. What I do know is that after many years of deliberating I finally converted a Remington 700 ADL into a .222 Rem. Mag. about 20 years ago. That began my relationship with a cartridge that I think deserves far more attention than it currently gets—or probably will ever get—but one that certainly deserves a better fate than to be swept into the dustbin of cartridges that “didn’t quite make it.”

As most avid readers of handloading manuals likely know, the .222 Remington Magnum sprang from the same government program in the late 1950s that sought to replace the .30-caliber service cartridges American GIs had relied on for years with a lighter, higher velocity round that allowed for the carry of significantly more ammunition with no significant reduction in lethality at typical combat distances expected to be encountered at the time. Ultimately, this study gave birth to the 5.56mm NATO/.223 Remington, but the cartridge chosen was based on the .222 Remington and produced one submission that ultimately morphed into the .222 Remington Magnum in 1958.

The cartridge itself is a bit of an enigma. At first glance, it resembles a .223 Rem., but on closer examination one quickly realizes it is a longer case with a significantly longer neck. Indeed, the .222 Rem. Mag. is nearly a full .100 inches longer than its stubbier military cousin, and the added length results in a slightly increased case capacity. To some extent, this added capacity is offset by a slightly lower SAAMI max pressure in the .222 Rem mag (the same pressure limit that in some ways limits its parent, the .222 Remington). A good rule of thumb, however, is that with modern propellants, a .222 Remington Magnum can drive the same weight bullet as a .223 Remington at the same speed at lower pressure, or it can drive the same weight bullet a little bit faster at the same pressure. While there isn’t a ton of difference in practical terms, it is a difference worth noting.

As envisioned by Remington at inception, cartridges in this family would rarely utilize bullets heavier than 55 grains. Yes, 60-grain projectiles were available and could be used, but they were reserved for niche applications for the most part. The odd guy who hunted deer with a .22 caliber, shooters who wanted a little more thump for slightly bigger animals (think European Roe Deer hunters), and perhaps other limited uses that could arise. As such, the cartridge was originally wheeled onto the showroom floor with a 1:14 twist—which in many ways would prove to be its undoing over time.

Juicing Up the Twist Rate

Recognizing this limitation, I had my rifle built with a slightly faster (albeit not fast enough by the standards of today) 1:12 twist Shilen Select Match Grade barrel. This helped allow the rifle become what I had originally imagined—namely be a first-class long-range ground squirrel rig and a capable predator rifle—shooting primarily 50- to 55-grain, plastic tipped bullets.

Handloading the .222 Remington Magnum has also been interesting. Even though it enjoyed some time on the benchrest circuit, it developed a reputation for being a bit finicky. Other handloading enthusiasts I know who own .222 Remington Magnums often second this opinion. In my experience, it’s a cartridge that lives at the extremes. Light bullets, such as the 40-grain Nosler Ballistic Tip or 40-grain Sierra Blitzking have shot quite well for me with powders such as AA LT-32, or H-322—at muzzle velocities of 3600 to 3800 FPS. On the heavier end of the bullet spectrum, various 52- to 55-grain bullets have thrived with the likes of Hodgdon’s Varget—a heavy charge of which will reliably drive 52- and 53-grain bullets at almost 3400 fps and break 3300 fps with 55s. Another sleeper of a powder for this round is VV N-135—and certainly don’t overlook the tried-and-true H-4895. Hotter primers seem to help this cartridge—CCI 450s, Remington 7.5s, and Federal 205s have all turned in excellent groups with the right mix of components.

Years ago, I spoke to Jim Carmichel—the former shooting editor of this publication and asked him some very pointed questions about powder charges in this cartridge, as I knew he had experience with it on the competition circuit several decades ago. In his slow Tennessee drawl, Jim told me in no uncertain terms “4198, Pat. Try 4198 with a good 52-grain bullet and I think you’ll be happy.”

Interestingly, a few years ago I sat in Bob Nosler’s office one afternoon and asked him the same question (Bob is also a .222 Rem. Mag. aficionado and knows a thing or two about handloading—as one would expect). “4198, Pat.  Give it a try.”

Lo and behold, last winter I assembled a battery of test loads with several leading 52-grain bullets and H-4198 (temperature insensitive, after all) and was rewarded with group after group in the low .5s to low .6s.  It shows a couple of things: First, the guys who worked with this cartridge 50 years ago figured out a lot of things that are still quite relevant today; second, the .222 Rem. Mag. might be finicky, but finicky in the world of gilt-edged accuracy is still plenty good for almost anything most of us do with a rifle.

For those of you who might be interested in this cartridge, take note that it’s not dead—on life support, yes, but not dead.  Nosler still manufactures ammunition utilizing a 50-grain Ballistic Tip. I’ve shot this ammunition and it’s good—quite good in fact. Nosler also manufactures cartridge cases—also of very good quality. The other source I know of for brass is Sako. A couple of years ago I was in Germany and paid a princely sum for 100 of their cases. They are also very consistent and durable but are significantly heavier (and thus require a lighter charge weight to reach pressure) than any of the American cases I have used.

I’d be remiss if I didn’t mention field performance of this round. From a velocity and accuracy standpoint, the .222 Remington Magnum will do anything that the .223 will do with the same weight of bullet. It cracks the magical 3500 fps barrier with 50-grain bullets and several different propellants (in a 24-inch barrel) and will definitely anchor any prairie dog, jackrabbit, coyote, or woodchuck unfortunate enough to step into its bullet’s path. With the right bullets, it’s also an excellent cartridge for fur hunters, though I would consider it to be a bit heavy for thin-skinned animals like fox or bobcat.

While the .222 Remington Magnum has enjoyed its heyday, reports of its demise are premature. If you have a hankering to try a cartridge that’s different, that’s sure to be a conversation starter, and won’t let you down on the range or in the field—look no further than this capable classic.