Looking for personal protection against Dracula? Rock Island Auction has the kit for you 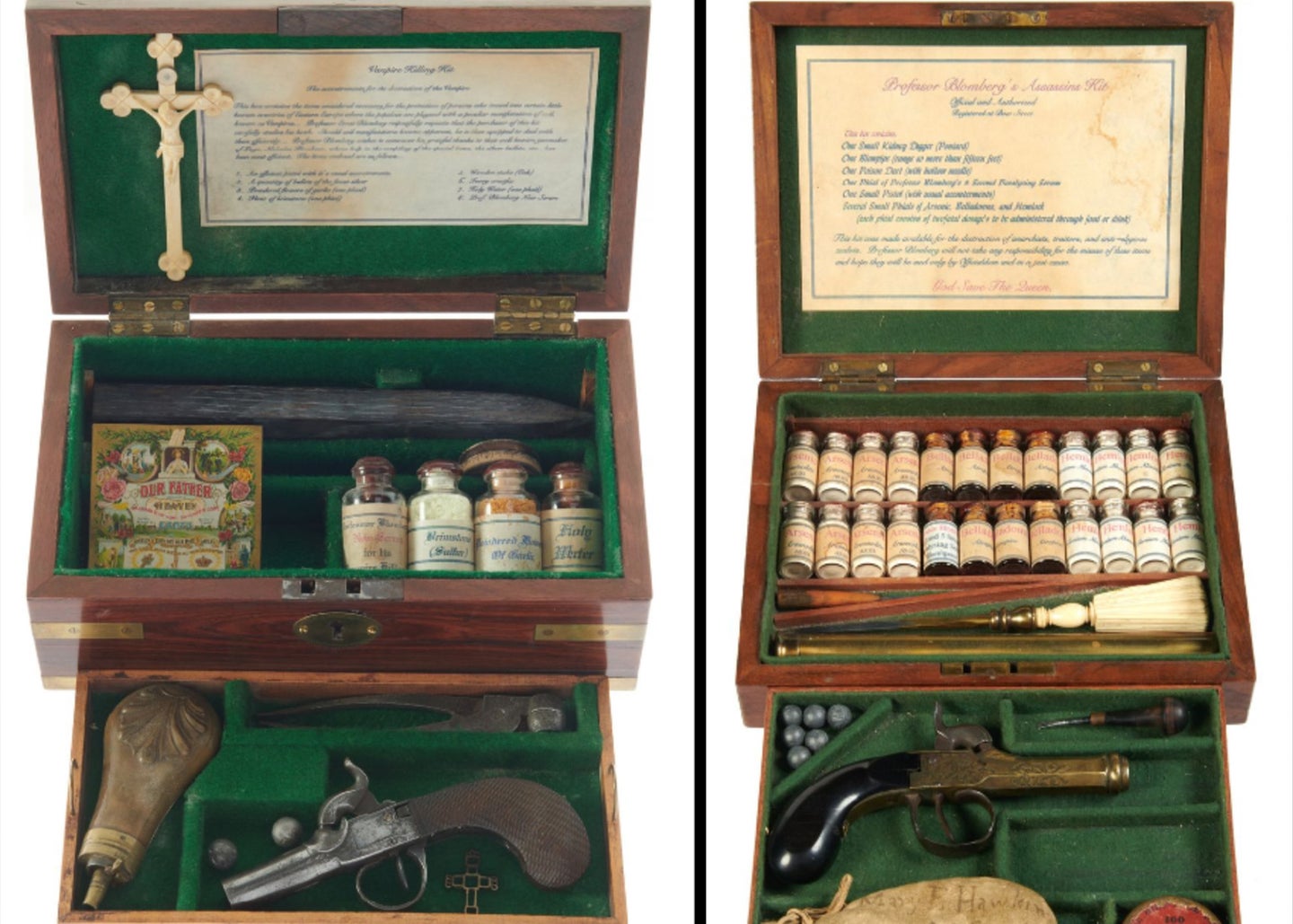 Maybe you’re looking to complete your Van Helsing costume for Halloween. Or, maybe you’re just after a cool collector’s item. Either way, the vampire killing kits that are currently up for grabs at the Rock Island Auction Company will fit the bill.

Three different vampire killing kits went up for online auction at 9 a.m. on Oct. 4 as part of Rock Island’s Sporting and Collector Firearms Auction. The auction ends on Oct. 7. According to the company, “these kits were assembled in the 20th century using a mix of original antique, modified, and modern components.”

Believe it or not, there is still a thriving market for vampire killing kits, which became popular in Great Britain sometime in the 20th century when characters like Nosferatu and Dracula became part of popular culture. Some will tell you that the modern-day kits lack authenticity and are little more than a collection of gimmicks, but when you’re talking about goods marketed for mythical beings, how “authentic” do they need to be?

What’s even more shocking is the price that some people are willing to pay for these items. The estimated price for the kits on Rock Island’s website are listed at $2 to $3 thousand apiece. And that’s small potatoes compared to this kit, which a collector bought from Hansons Auctioneers in Derby, U.K., this July for $20 thousand.

The vampire killing kits that are currently up for auction each include slightly different accoutrements such as holy water, garlic powder, and various crucifixes. But the core item in each one is something that no self-respecting vampire hunter would leave home without: a pocket-sized percussion pistol complete with a few “silver” bullets. According to lore, these rounds have proven to be more effective against werewolves, but they’ll probably slow down a lusty bloodsucker long enough for you to seal the deal with a well-placed wooden stake to the heart. Also, while some paranormal experts continue to debate the existence of werewolf-vampire hybrids (vamp-wolves? were-pires?), it’s better to err on the side of caution this time of year.

The percussion pistols themselves are real antiques, and they are the main draw for most of the firearms collectors that Rock Island caters to. One of the pistols being auctioned is a classic Belgian boxlock muzzleloader with a walnut grip and a 1 and 5/8-inch barrel. The pistol comes complete with a ball mold, cap tin, and powder flask. Another gun, which falls more into the novelty category, is an incognito underhammer pistol shaped like a cross.

Read Next: That Time a Python Hunter Found a Satanic Ritual Site in the Florida Everglades

The individual components included with each kit are listed on the inside of the wooden boxes that house them. Professor Blomberg’s Assassin Kit, for example, contains several small vials labeled “arsenic”, “belladonna”, and “hemlock”, along with one vial of Blomberg’s 5 Second Paralyzing Serum. The box also holds some standard ghoul-slaying equipment, including a small dagger, a poison dart, and a blowpipe to shoot it with. According to the box, the kit is just as effective against Dracula’s spawn as it is against other unsavory characters.

“This kit was made available for the destruction of anarchists, traitors, and anti-religious zealots,” the box reads. “Professor Blomberg will not take any responsibility for the misuse of these items and hopes they will be used only by Officialdom and in a just cause. God Save The Queen.”