How to Make Wild Hickory Bitters for Cocktails 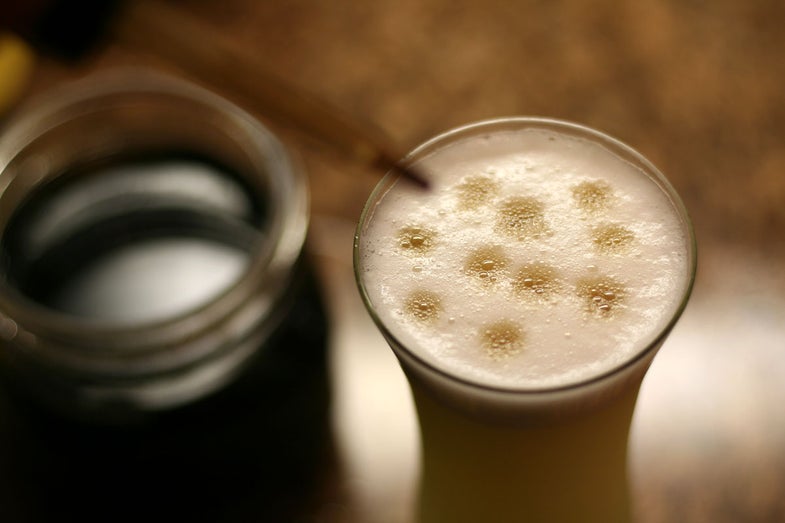 Bitters made from bitternut hickories make a tasty addition to your favorite cocktail. Jamie Carlson
SHARE

I am not usually big on New Year’s resolutions and I don’t really make any. I do, however, like to pick something every year that I can learn more about and try to incorporate into my life. Last September I attended a class put on by some guys from Bittercube. Bittercube makes craft bitters for cocktails, and the class was not only entertaining—it was inspiring. Afterwards I talked with one of the bartenders and asked a few question about incorporating wild ingredients into cocktails. It seemed like a possibility and after our discussion I was determined to learn more and try to bring some more wild ingredients into my cocktails.

There was only one problem: Fall and winter aren’t the best time to get into the woods and gather wild ingredients. Most of the berries and plants are at the end of their life cycles. I thought spring would be my next chance to get into it—and then I went deer hunting. As I sat in the woods, I couldn’t help but notice the constant thud of nuts hitting the ground all around me. I wasn’t certain what kind of nut they were, so I filled a small bag and took them home to identify them. As it turns out, they were bitternut hickory nuts. All varieties of hickory nuts are safe to eat, but the bitternut hickory is labeled “inedible.” As the name suggests, they’re apparently too bitter to eat. I shelled a few, roasted them, and gave them a try anyway. As it turns out, they were named appropriately. The nuts are so bitter and harsh that it’s almost impossible to chew a whole nut and swallow it without the assistance of water.

This was both a good thing and a bad thing. It was bad because, well, it was obviously not edible. It was good because here was a bitter ingredient, and I had just read a book about making bitters. Making bitters requires a few things: first and foremost a bittering agent, then some flavoring, and finally a sweetener. I now had my bittering agent.

Making bitters isn’t hard at all, it just requires time. I picked these nuts back in October and after shelling them, I soaked the nuts in Everclear for about a month. Then I added the flavoring agents. You could use any kind of flavoring agents you like, so I chose vanilla bean, allspice, and cloves. I have been playing around with sorghum a lot lately, so I decided to use it as my sweetener. The whole process to make 1 ½ cups of bitter took just over two months. That may seem extreme, but you really don’t have to do anything other than shake the jar every couple days or so.

To use your bitters, just add a few drops to your favorite cocktails. I made two cocktails right away to test out the homemade bitters. The first was a gin sour: 2 oz. gin, 1 oz. lemon juice, 1 oz. simple syrup, and an egg white. Place all that in your shaker with ice and shake vigorously for about 1 minute. Pour it into a glass and add 10-12 drops of bitters on top.

The other drink was a whiskey sour: 2 oz. whiskey, 1 oz. simple syrup, 1 oz. lemon juice, and one dropper full of bitters stir together and pour over ice.

Both cocktails were beyond delicious. Even my wife—who claims not to like either gin or whiskey—really enjoyed both.

2 cups of bitternut hickory nuts, gently crushed with a hammer

Enough Everclear to cover the nuts

Place the nuts in the jar and cover with Everclear. Allow to soak for about a month, shaking the jar every few days.

After one month, add to this one split vanilla bean, 1 tablespoon of whole allspice berries, 2 tsp. whole cloves. Let this sit for another month or so. After the second month, place the ingredients of the jar into a sauce pan and add to it an additional ½ cup of distilled water. Bring to a boil, then turn off the heat and let it cool to room temp. Be very careful in the process as Everclear is highly flammable. When It reaches room temperature, filter the bitters through a coffee filter to remove all debris and particles. Add ¼ cup of sorghum to the bitters and stir until combined. Add the bitters to your favorite cocktails and enjoy.