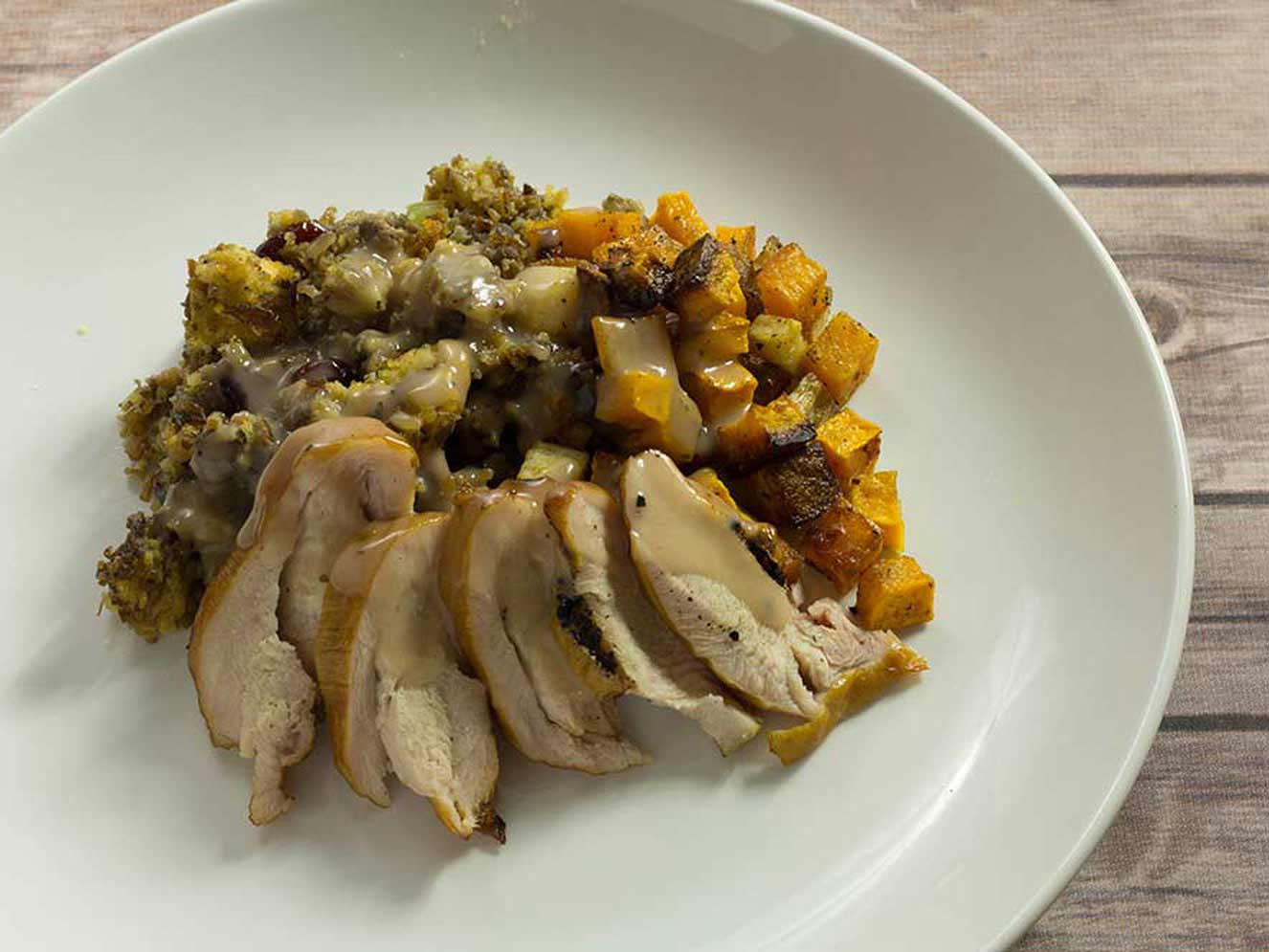 This smoked turkey and duck sausage dressing is a wild take on a Thanksgiving classic. Jamie Carlson
SHARE

Turkey, stuffing, mashed potatoes, cranberry sauce, pumpkin pie, and football. In America, that’s usually what’s on the menu on the fourth Thursday in November. But in the fall of 1621, the original Thanksgiving meal didn’t resemble this in the slightest. The Pilgrims at Plymouth Plantation had a lot to be thankful for. The Wampanoag helped them survive the previous winter and harvest plenty of food over the summer. The two groups decided to come together and celebrate this for a few days with a feast, during which they ate a mix of wild fish and game. Here is an excerpt from one of two firsthand accounts from a man named Edward Winslow:

“Our harvest being gotten in, our governor sent four men on fowling, that so we might after a special manner rejoice together after we had gathered the fruit of our labors. They four in one day killed as much fowl as, with a little help beside, served the company almost a week. At which time, amongst other recreations, we exercised our arms, many of the Indians coming amongst us, and among the rest their greatest king Massasoit, with some ninety men, whom for three days we entertained and feasted, and they went out and killed five deer, which they brought to the plantation and bestowed on our governor, and upon the captain and others.”

That sounds a little more like deer camp than grandma’s house. Along with a pile of venison and week’s supply of fowl, it’s not out of the question to assume there were also dried fruits, berries, nuts, fish, and shellfish at the feast. Being that most of these things are available to hunters and anglers, we took a deep dive into some past recipes from our Cast-Iron Chef blog. In the spirit of that original Thanksgiving meal, here are eight ways to bring back some wild game to the table this season.

Hunting, fishing, and foraging were part of everyday life in the 17th century, and one abundant source of food was hard mast, such as beechnuts, hickory, chestnuts, and even acorns. The pilgrims would stuff birds with nuts instead of the bread-based stuffing of today because flour was in short supply. But you don’t need wheat to make bread. It’s possible to turn acorns into flour and then into bread through a process of grinding and soaking in water to leech out the tannins (bitter-tasting compounds). If you’d like to try making acorn flour, this step-by-step guide will help. It also includes a recipe for acorn-flour pancakes.

The Wampanoag showed the colonists a lot ways to grow and keep food, but neither group had access to refrigeration. Instead, things like berries and other fruit had to be eaten fresh or preserved. The most likely way they would have done this is by drying, but there’s another way to preserve fruit without refrigeration. Canning has been done for generations, and it’s still a perfect way to preserve wild berries for months. The pilgrims wouldn’t have had the sugar for this wild black raspberry jam recipe, but it still goes good with butter and toast, on a leftover turkey sandwich, or even some acorn-flour pancakes.

Today lobsters and other shellfish are considered delicacies, but 400 years ago, they were a staple. The Atlantic coastline provided Wampanoag and the colonists with clams, mussels, and lobster. But there’s also another crustacean, readily available in freshwater, that’s just as worthy of dipping in clarified butter: the crayfish. Here’s a classic crayfish etouffee to serve alongside the main course.

In the first sentence of the Winslow account, there’s a mention of fowl:

“Our harvest being gotten in, our governor sent four men on fowling, that so we might after a special manner rejoice together after we had gathered the fruit of our labors.”

Turkey is considered fowl, but the first thanksgiving probably included waterfowl instead. Ducks and geese would have been easier for the settlers and the Wampanoag to catch and cook. They are also more plentiful in the wild. The birds were most likely roasted over a fire. Spit roasting a whole bird is an involved process, and most will opt for an oven instead, given a chance. If you’re thinking about swapping a duck for a turkey this year, this orange glazed duck with wild rice stuffing is an excellent place to start.

Another bird readily available in the 17th century was the passenger pigeon. When populations were at their peak, it is said that flocks were so thick they would black out the sky. Unfortunately, this didn’t last. Due to heavy market hunting and habitat loss, the passenger pigeon is now extinct. A similar bird (though not closely related) is the mourning dove. In fact, one of the last living wild passenger pigeons was found roosting with mourning doves.

A classic popper recipe will work with doves and most other upland birds (and it also pairs well with football). But most dove hunters already have that recipe figured out. Instead, here’s a flaky cheese and pepper dove roll recipe that’s sure to please.

Fish played a big part in the colonist’s lives. They were loaned money to start the colony, and they planned to pay some of their debts back by fishing. Atlantic white cod would have been the fish of choice, though they would have also had access to other fish like runs Atlantic salmon. Here’s a linguini with salmon cream sauce recipe that makes use of the leftover, extra meat after filleting a fish.

Read Next: How to Bring Wild Treats to Your Thanksgiving Table

Deer meat was likely the centerpiece of the first thanksgiving. After all, the Wampanoag brought five deer with them to the feast. Simple but effective, here’s the best way to apply heat to a backstrap and achieve perfection. And, just in case you have five deer on hand and a village to feed, here’s a guide on how to butcher and cook every scrap of meat on them.

So where did this turkey thing come from anyway? The one other written account from the autumn of 1621 does mention that the pilgrims had turkey, although nobody is certain that it was eaten at the feast. The second account from William Bradford states:

“And besides waterfowl there was great store of wild turkeys, of which they took many, besides venison, etc.”

Long after Bradford’s death, his journal was found and reprinted in the 1850s, and for some reason, people really liked the part about turkey. During that time, Sarah Josepha Hale, the editor of a magazine called Godey’s Lady’s Book promoted the turkey as a centerpiece of the table. Hale was also a strong voice behind Thanksgiving Day becoming a national holiday. She wrote letters and even petitioned a few presidents.

Finally, in 1863, Abraham Lincoln declared the day a national holiday, and turkey has been the star of the show ever since. Whether wild turkey was eaten during the first Thanksgiving or not, it’s still delicious. If you have a left-over gobbler from the spring, or one you’ve shot this fall, this wild take on a classic Thanksgiving turkey recipe is sure to get some attention at your table.