How to Ruin Your Gun in 8 Easy Steps 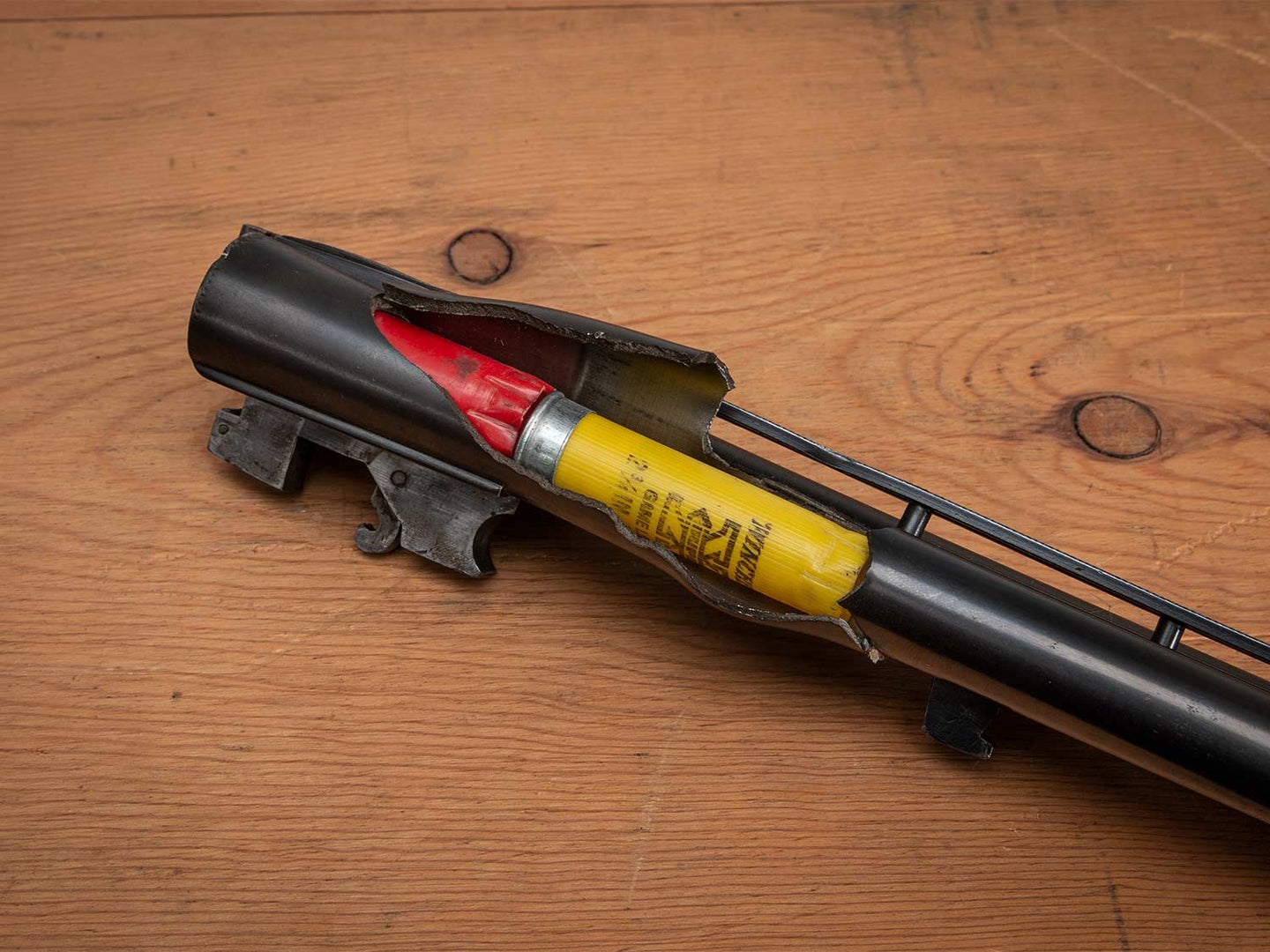 Although this doesn’t happen often, putting a 20-gauge shotgun shell in a 12-gauge shotgun can be deadly. Turnbull Restoration
SHARE

Bob, Nick, and I had just returned from a bone-chilling cold late December sea-duck hunt, and our first job was to get the sand and salt off both the insides and outsides of our shotguns. We’d then hang our gear in between the basement furnace and the dehumidifier to dry for tomorrow’s hunt before cleaning and picking the birds.

But Bob was so cold that he didn’t join us. Instead, he fogged up the bathroom with a hot shower. The relaxing heat made him tired, so he took a nap. Bob woke up a few hours later, ate a big bowl of clear clam chowder, and washed it down with a three-finger glass of bourbon. He was barely into the first quarter of the Auburn game when he passed out again. Bob didn’t move from the couch.

By morning, his pump gun was a mess. Rust formed on the receiver, the pins were frozen tight to the trigger assembly, and corrosion and sand kept the slide from moving. He skipped the morning hunt to try and resurrect his shotgun, and he was still hard at work when we returned. The choke tube was stuck, and it wasn’t coming out any time soon.

Time to See a Gunsmith

For over 35 years, virtually every shipping box opened by Doug Turnbull of Bloomfield, New York’s Turnbull Restoration company has contained a rifle, shotgun, or pistol in rough shape. Negligence is only one of the many reasons for firearm failure. Other common problems come from accidents, while others are the result of regular use over time.

“I grew up around firearms,” Turnbull says. “My parents owned Creekside Gun Shop, which was a retail and gunsmith store. I wasn’t much interested in retail, but I was fascinated by the mechanical work done on the rifles, shotguns, and pistols. The color-case hardening process was of particular interest to me, but to work on the case colors, I needed to take apart firearms. Once under the hood, I grew fascinated by the processes used by each manufacturer. These days, Turnbull Restoration works on American classics from the period of 1880-1940 as well as modern replicas.”

Turnbull is a master of restoring guns from poor to like-new condition, and over the years, he has seen it all. According to him, these are eight of the most common ways to ruin your gun.

1. Leave Your Gun in the Case

“No one is exempt from firearm problems, not even me,” Turnbull says. “I remember one odd situation that occurred while hunting Dall sheep in the Brooks Range of Alaska. My personal firearm, a Winchester 1886 chambered in .475 Turnbull, suffered some damage on that trip. It didn’t come from falling on any of the rocks or loose shale. Oddly enough, it came from bringing the rifle into my tent.

“The heat and humidity from us hunters in the tent caused condensation to form on the canvas walls. That carried over to my rifle, and when I woke up, my Winchester was covered with flash rust. I removed the rust by polishing the receiver and the barrels with a cloth and gun oil. But after that, I kept my rifle outside the tent, and there were no other issues.

“If you’re on a hunt this fall, always remove your rifle or shotgun from its case when you get back to camp. Store it in the driest area possible. If your fall trip includes hunting elk at high elevations, keep your rifle in the pack tent. There won’t be as big of a temperature difference in the pack tent as I found in tents with hunters.”

2. Lean Your Gun Against Your Truck

“Other common accidents I see are dents in barrels, dings in receivers, or chips out of stocks,” Turnbull says. “In most instances, they come from a rifle or shotgun that falls while leaning against a truck. Other damage comes from folks driving away, thinking their firearm is stored when it’s really outside of the vehicle. Gunsmiths can repair minor dents just as they can repair stocks. But be sure that your firearms are properly stored before moving to the next stop.”

“Problems also come from over oiled firearms taken into cold temperatures,” says Turnbull. “They function properly when you’re patterning them in the summer at the range. But in cold weather, heavy amounts of oil or grease can get thick enough to keep firing pins from reaching primers. Before you go on a hunt, have a gunsmith check your firearm’s locking systems and all mechanics to make sure they are properly lubricated.”

4. Clean the Barrel in Reverse

Turnbull says that improper cleaning can ruin rifling. “The helical grooves machined in the barrel’s internal surface run from breech to muzzle. Cleaning rods should be run the same way, meaning, from breech to muzzle. Damage to the crown comes when cleaning rods are run in reverse, which is from muzzle to breech. When the cleaning rod rubs against the rifling, damage occurs, which affects the accuracy. At the end of a long, tiring day, it’s easy to want to fast-track cleaning, but doing so will ultimately ruin the rifling. If you want to clean quickly, use a bore snake or a guide on your cleaning rod which keeps the rifling intact.

The proper way to clean a rifle is from the breach to the muzzle. Dip a bristle brush in solvent, and scrub to remove powder residue and any lead. Moisten a patch with solvent and run from breach to muzzle. Repeat until clean. Run a dry patch through the barrel to remove any solvent, and then run a lightly oiled patch through to protect the rifling.

5. Let The Stock Loosen Up

“The stock makers at Turnbull Restoration see an awful lot of cracks behind lockplates,” he says. “Those cracks come from loose stock bolts. Upon discharge, the barrels and receiver crash into the stock. If there is any play in your receiver, get it tightened before significant damage is done.”

Read Next: How to Clean a Shotgun in 6 Simple Steps

6. Do Your Gunsmithing in the Garage

“I see a number of buggered up screws,” Turnbull says. “They come from folks using ordinary tools on firearms.” Screw heads get chewed up by using generic screwdrivers, and they can be improperly tightened as well.

“Avoid those issues by using precision-ground screw-drivers. They fit screw heads properly and solve problems before they start.”

“Occasionally, I’ll see shotguns with barrel bulges,” he says. “Bulges come from increased pressure in the tubes. A simple dent caused by hitting a tree while swinging on a bird or accidentally dropping the shotgun decreases the bore diameter and increases the pressure. Another common issue is shooting a shell if the muzzle is plugged with mud or dirt. That’s an honest mistake and usually sustained while setting decoys or tripping and falling in the woods.”

Gunsmiths can remove most dents, but bulges are difficult, if not impossible, to fix. Shotguns with bulges are not safe to shoot, so have your barrels inspected and repaired before using them in the woods or in the marsh.

Hunter safety courses stress the importance of keeping different gauge shells separated. Occasionally though, smaller gauge shells are dropped into a larger bore shotgun. Those smaller gauge shells lodge in the barrel, and when a shell of the correct gauge is added, and then discharged, an explosion occurs. This type of accident, fortunately, doesn’t happen that often, but when it does, it’s not only problematic for the shotgun but also dangerous for the shooter.

8. Mess With Your Reloads

“Common issues with handguns come from underloading bullets,” Turnbull says. “Dropping from bullets with 10 grains of powder down to four grains is an example. Powder is meant to burn slowly, and 10 grains of powder burns properly, but a small amount of powder such as 4 grains burns all at once. It’s not a big issue with rifle cartridges because the sudden powder burn is minimized by the extra case capacity. Those shots usually are duds. But in a pistol, that quick burn creates a detonation that can cause the weapon to blow up. Be very careful when reloading your own bullets, especially if you like to experiment to achieve better performance.”

If your hunting season isn’t already underway, then it will be soon. Keep these eight points in mind, and you’ll keep your gun in working shape. And if something happens, give Turnbull Restoration a call. With their level of experience, they have the expertise to know what to do.