How to Survive a Summer Storm in the Backcountry 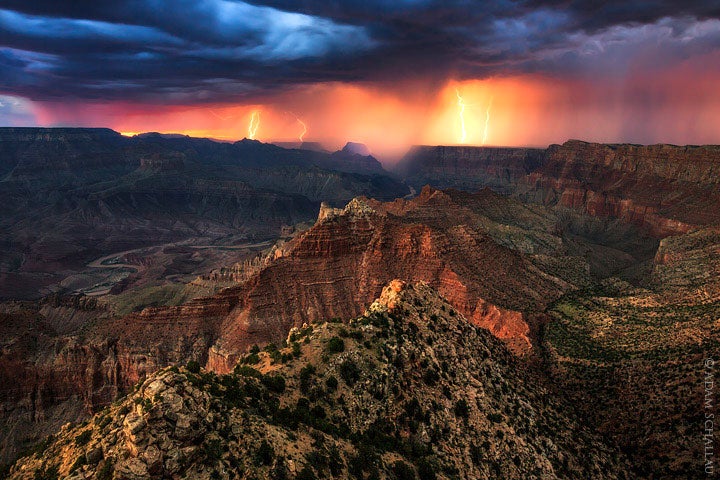 How to Survive a Summer Storm in the Backcountry. Courtesy Adam Schallau/U.S.D.I./Flickr
SHARE

The weather may seem like our best friend when it doesn’t rain on our parade, or if our newly planted crops get a gentle measure of rain. But the forces that move air, moisture, and heat aren’t always so benevolent. Nature’s most violent storms can cause levels of destruction that leave your home, neighborhood, and community looking like a wasteland, or worse, a battlefield. Every year, thunderstorms, hurricanes, flooding, mudslides and hail storms take their toll on the face of the earth, leaving devastation and ruin in their wake. Wind, water, lightning, mud, and hail can kill; but they do not do this without warning. As the storm clouds gather, we still have time to prepare. The radio, the television, and even our phones can signal us of impending danger. Are you ready?

Thunderstorms occur from the moisture, warm air and lift caused by cold fronts, mountains, the sun’s heat and other factors. You should always seek shelter before thunderstorms, and if you hear the rumbling of thunder, go indoors. But what happens when you’re far out into the backcountry? Get down off of ridges and hilltops, if possible. Avoid standing near or under the tallest trees. Lie on the ground, for the best lightning protection. Continue to avoid open ground or high places for 30 minutes after the storm, in case of lingering lightning. Although thunderstorms are relatively small, compared to hurricanes, they still average 15 miles (24 km) in diameter and carry significant destructive force. All thunderstorms are dangerous – producing deadly lightning, and often high winds and hail. Each year in the United States, there are approximately 100,000 thunderstorms. Roughly 10 percent of these are classified as “severe” by the National Weather Service, having damaging winds of at least 58 mph (50 knots) and/or having hail at least ¾ inches (19 mm) in diameter.

Lightning causes 55 to 60 deaths and 400 injuries each year in the United States. Lighting accompanies every single thunderstorm, and it doesn’t always strike in predictable places. One common misconception is that you are completely safe from lightning in a vehicle. It turns out that lightning can arc from the vehicle to its occupants. That said, you are still safer in a vehicle than being caught out in the open or up in a tree (please don’t climb trees in storms), but you’ll be much safer indoors (if that’s even an option). If you get caught without a car or shelter, lie flat on the ground in a low area to reduce your risk of lightning strike.

Ever been caught out in a severe storm? Please tell us your story by leaving a comment.