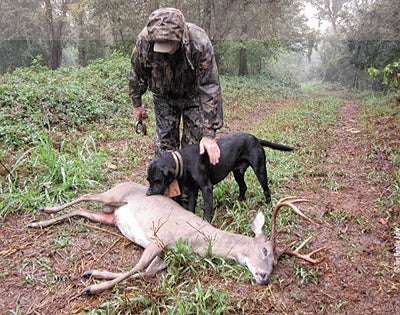 Bow-killed deer recovered with the aid of a tracking dog will now be accepted for inclusion in the record books.
SHARE

Recovering a shot animal is the ultimate responsibility of every ethical hunter. This is especially is true for bowhunters, who commonly must follow a blood trail to find their buck or bull.

Every big-game hunter needs to hone their blood trailing skills, however in recent years the use of tracking dogs has become more popular. This is mostly because a well-trained blood trailing dog can find critters faster and more effectively than most human trackers.

Dogs have become so useful to hunters in recovering game that many states now not only allow their use, but often offer the names and contact information for tracking dog owners who hunters can use to find their lost game (go to Unitedbloodtrackers.org to find a blood tracking dog near you).

But up until recently, animals recovered by tracking dogs weren’t eligible for submission into the Pope & Young Club record books. That changed last month when the prestigious archery organization issued an updated policy on the use of canines. Their proclamation reads:

The Pope and Young Club recognizes that the use of tracking dogs to locate a wounded animal is becoming an increasing popular tactic and is being legalized in many jurisdictions.  The Club supports the philosophy that it is the responsibility of an ethical hunter to expend all reasonable effort in recovering a wounded animal.

To the same degree, though, the Club believes it important that a hunter learn and master the traditional practices of blood trailing and tracking.  These skills are inseparable components of a well-rounded hunter and are important woodsmanship values of the overall experience.  Further, the Club is concerned that certain technologies and practices can be used as a crutch and actually supplant the basic skills expected and desired of a bow hunter.

As such, the Pope and Young Club will accept record book entries recovered with the use of trained tracking dogs with the following conditions/provisions:

1.    The use of a tracking dog(s) must meet ALL state or provincial laws in the jurisdiction you are hunting that governs the use of tracking dogs for wounded animals.

2.  The dog must meet all local requirements concerning training and/or licensing.

3. The recovery must be completed within 48 hours of the initial shot and the hunter MUST be present.

4. The dog may be used to recover a dead big game animal only.  If the animal is found alive, the use of a tracking dog must be abandoned immediately.The final determination of eligibility for entry of all animals found alive and later taken will be at the Records Committee’s discretion.