This Georgia Buck Never Shed Its Antlers. It Grew Into a Velvet Giant

Benny Overholt of Macon County, Georgia, took the archery buck of a lifetime 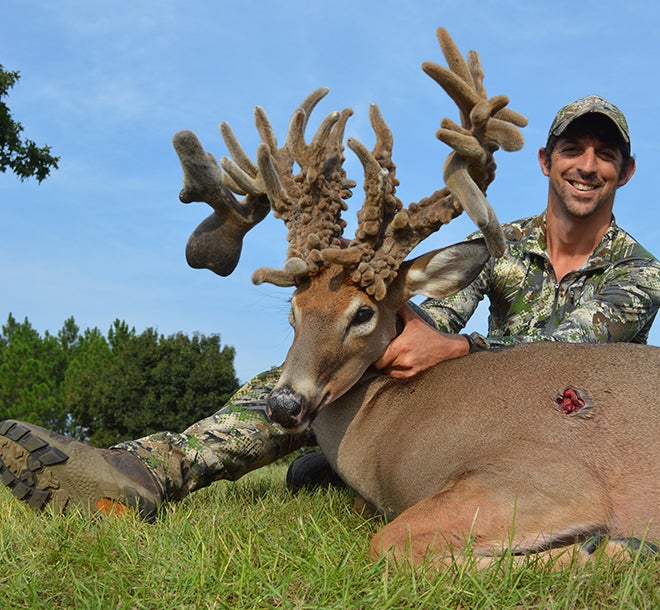 Last season, Benny Overholt was bowhunting farmland he works near his home in Marshallville, Georgia, and he spotted a big buck that had broken off a major part of its main rack.

The buck came just 10 yards from Overholt’s treestand. But the veteran bowhunter decided to pass.

“I knew it was a special buck, and believed the following season it would grow back its rack and then be a once-in-a-lifetime trophy,” says the 33-year-old hunter, who has taken more than 30 deer with his bow.

Overholt kept tabs on the deer with trail cameras throughout the hunting season and into the summer. But he learned the buck never shed its rack as it had done in previous seasons. Instead, the velvet antlers just kept growing and growing, until they reached freakish proportions.

Overholt later learned the buck must have had some type of injury. Its testes were unusual and malformed, which he believes had something to do with the buck not shedding its antlers, and instead just growing a giant rack covered in velvet.

Overholt had patterned the deer for months using trail cameras, and on the evening of Sept. 11, Georgia’s opening day of bow season, he had the buck close to his stand again. This time, he couldn’t get a shot.

“I couldn’t get back to that stand until Monday, Sept. 13, and I was going crazy to hunt him again because I knew he was a special buck,” says Overholt.

He was back in his stand Sept. 13. Just 30 minutes before dark, Overholt noticed the buck, nicknamed “Velvet,” when it was at 65 yards and moving toward his treestand. He stayed calm and motionless until the buck was in bow range.

“I drew on him at 37 yards, but just before Velvet got into an open trail he angled toward me a bit, not offering the best broadside shot,” says Overholt. “I aimed just behind his shoulder, and let the arrow go when he was at 33 yards. I heard a loud whack when the arrow hit. Then the buck stumbled a bit when he turned and ran…I thought I made a poor shot, farther back than I had wanted, and I was really angry at myself.”

Overholt waited awhile, then climbed down to the spot where the buck was standing at the shot. He found no arrow and no blood. Convinced he’d made a poor shot, Overholt left the area and contacted family members and a friend with a trailing dog.

They took up the trail six hours later at 2 a.m. The initial trail blood was poor, with very little sign. Overholt had been able to watch the deer run for about 100 yards following his shot, and it was there, at the last place he saw the deer, that the trail improved. Only 20 yards beyond, they found the buck.

“When I couldn’t find my arrow or blood I was convinced it was a bad hit,” says Overholt. “But the shot was perfect, right behind the shoulder, passing through both lungs and driving into the buck’s off-side ham, hitting its leg bone. The loud whack I heard was the arrow hitting its ham bone.”

The velvet buck is an incredible, massive animal. The deer weighed 229 pounds, and 186 pounds dressed. The non-typical rack will be difficult to officially score for the record-book, even after the official 60-day drying period.

Read Next: 6 of the Biggest Kentucky Velvet Bucks from This Fall

It’s likely that the buck has well more than 200 inches of rack. Overholt is having the buck mounted by a taxidermist, with the rack in velvet. He believes the deer is five or six years old, and will have its teeth inspected to confirm age.

“I’m really humbled by the whole experience, and feel blessed and honored I just happened to be the bowhunter who took such an incredible animal,” Overholt says. “I didn’t do anything special to take such a remarkable deer, I feel truly fortunate to have been able to watch that buck grow on our farm, and to be able to harvest it.