Kansas Bowhunter Tags Record-Book Buck While Hunting With His Brother

Bailey Pattin shot a giant, 200-inch whitetail buck while hunting with his brother on family land 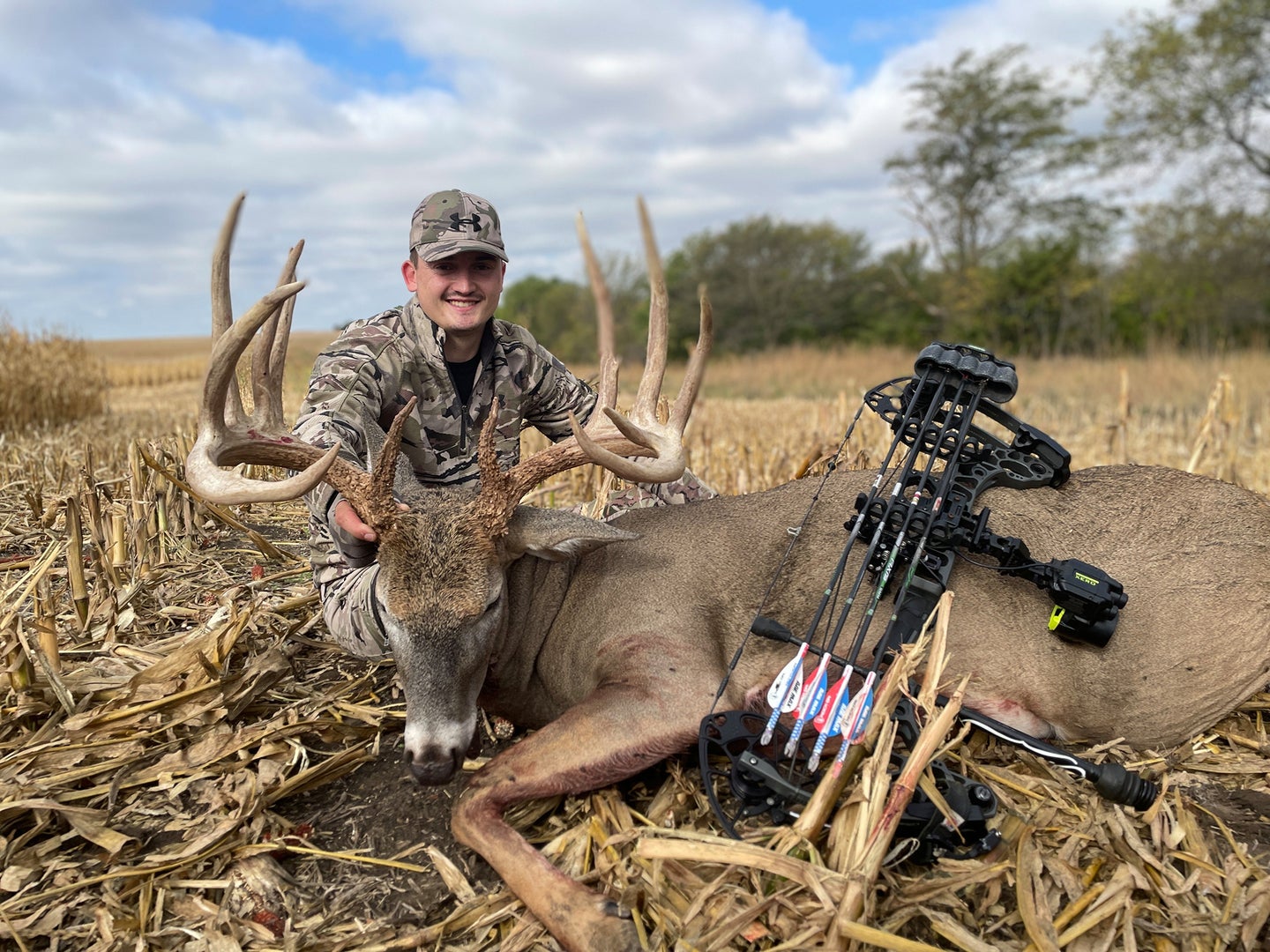 Bailey Pattin, 24, is young in years but long on deer hunting experience. The recent MBA college graduate took his first deer with a firearm at age 14 during a youth hunt in Missouri. But ever since, he’s hunted deer almost exclusively with a bow, taking about 30 whitetails over the last decade.

So last November when he got a remote trail camera photo of a huge buck on family hunting property in Northeast Kansas, he got excited. The buck in the photo was much bigger than the 8-point, 139-inch, split-brow tine, 5.5-year-old buck he’d already tagged with his bow in Oct. 2020.

Bailey, who works as a global supply planner for Garmin International, was anxious for the 2021 bowhunting season to roll around so he could target the bigger buck spotted on camera. During the off season the whole Pattin family worked extra hard to make their 150-acre spot ideal for whitetails and bowhunting.

“The farm is a great mix of timber, CRP, bean and corn fields, with about six food plots we put in, too,” says Bailey. “There are plenty of deer, and some good ones. My dad, Jess, shot a 170-incher there a few years ago with his bow. That’s about all we ever do for deer is bowhunt — my two brothers [Brock 16, Blaine, 21], dad and I.”

In July the Pattins placed about a dozen tree stands on the property and four remote trail cameras to learn about game activity. The big buck showed almost immediately, and he’d grown substantially since 2020. Cameras recorded day and night photos of the buck through summer and into the September bow season.

“Early in the season we didn’t want to push into the farm’s core deer area, which is a tangled jungle of briers and brambles they bed in,” details Bailey. “We had stands around the outside edges, which we hunted, taking our time and believing eventually we’d get a chance at the big buck.”

Cellular trail cameras were invaluable in patterning the buck, and often the deer would be near a choice spot or stand, but the wind was wrong to hunt the place. So, Bailey bided his time, watching cameras, waiting to hunt the right stand at the right time.

“We had two choice stands, one set for a north wind, the other for a south wind, and the big buck used those locations about the same amount of time,” says Bailey.

The stands were ladder style, set up for two hunters. The hunt plan was for Bailey and his brother Brock to hunt the same stand, with Bailey targeting the bigger buck, Brock would take one of several smaller, nice 8-pointers that were cruising the property regularly.

On Sept. 20 the wind was right for the brothers to hunt a stand. They spotted the buck, but never got a shot. The deer came to 34 yards, but faced them. So Bailey passed the deer, biding his time again for just the right moment.

On Oct. 1 Bailey and Brock headed to the farm for a weekend hunt, spending the night in a cabin there. Trail camera photos showed the big buck working a scrape in a place that would be a poor choice to hunt the following morning, because the hunters would surely spook the deer going in before daylight. So, instead they hunted the stand the afternoon of Oct. 2.

The brothers got to their ladder stand early, about 3 p.m. The stand is in a thick field hedge row, buried into leafy cover for concealment.

READ NEXT: Will Kansas Become a Preference Point State for Deer Hunters?

“We were talking football, glassing the area and saw about a dozen does and small bucks, while watching a thick bedding area we knew the buck would come from about 150 yards away,” Bailey says. “It’s so thick, though, that the deer came up the overgrown hedge row from the bedding thicket and we never saw him until we heard a twig snap, and there he was… Close by in the hedge row coming to us.”

Bailey got his bow up and spotted the buck at 10 yards, but the deer kept coming, stopping finally at just six steps from the ladder.

Such close shots sound easy, but they’re not. Shooting down at close range isn’t something most archers practice (or have a pin for). Bailey he uses a special Garmin “Xero” bowsight. The sight instantly calculated the distance and shot angle to the buck, making it a chip shot when Bailey touched his released and sent his arrow to the deer’s chest.

The shot angle was nearly straight-down and slightly quartering away.

“He blasted out of there after the shot,” Bailey recalls. “The arrow stayed with him, my lighted nock flickering away in the fading light. The hit sounded and looked good, but we were losing daylight, and at 40 yards he raced into the hedge row then we couldn’t see him anymore.”

The brothers found a good blood trail, called their parents, and headed back to the cabin. They decided to leave the deer in the 40-degree night temperatures overnight. Then find the buck first thing in the morning.

The rest of the Pattin family arrived that next morning at the cabin, including Bailey’s mom Gina, and his girlfriend Abbi Folks. They tracked the deer 200 yards, and found it by 9:30 a.m.

The buck is a giant, even by Kansas standards. It was never officially weighed but Bailey estimates it at 300 pounds, perhaps more. The rack is impressive, perhaps Boone & Crockett class after a 60-day drying period. It has 14 scorable points, and a green score of 201 inches. Main beams measure 24 inches, with a pair of 12-inch tines, other tines of 8 and 9 inches. Main beam base circumferences are each almost six inches.

Bailey says he feels blessed to take such a great buck, especially with having his whole family involved in farm work and in recovering such a remarkable animal.