How to Put Weight On an Active Hunting Dog

This time of the season, my dogs simply cannot keep weight on. They run, on average, three or more miles... 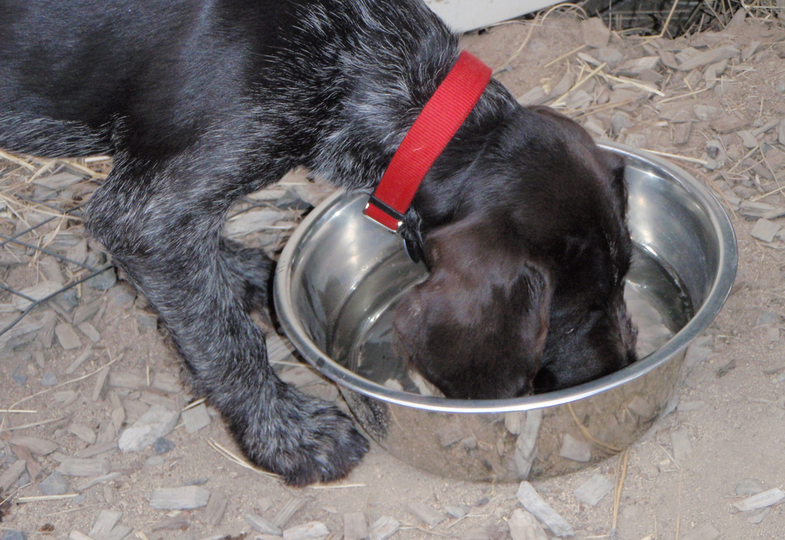 This time of the season, my dogs simply cannot keep weight on. They run, on average, three or more miles for each one I trudge in the field. They burn thousands of calories on a hunt; their stomach’s ability to store energy can’t keep up with the depletion of their intense activity.

You simply can’t jam enough dog food into a hard-hunting pooch this time of year for a number of reasons. Here they are:

1. There are simple mechanical and physiological reasons not to feed your dog the morning of a hunt.

Try this experiment: Take off your sock (representing your dog’s stomach and intestinal track), drop your car keys (ersatz “dog food”) into it. Hold it horizontally, and the dog food will settle in the heel (the “stomach” in our example G.I. tract). Jiggle it, swing it back and forth, whip it around a little like a dog on the hunt. All that weight will make the sock swing, bounce up and down, possibly even twist. Veterinarians call that gastro volvulus, and it is often fatal.

2. Your dog’s athletic performance is another concern. Nestle-Purina studies have shown that a dog with food in its gut runs slower, is less agile, and has less stamina than one hunting on an empty stomach.

3. The gut is not using the body’s finite amount of energy to digest food when it could be fueling muscles that are chasing birds.

No guilt trips here. Your dog’s metabolism is unlike yours. Sending your dog into the field without breakfast will have no ill effects. Unless he’s got other health problems, he won’t develop “low blood sugar.”

So what are the solutions to this hunt-season feeding regimen?

Solution #1
Feed him twice as much at night (many hunters do this all year), and you’ll take the edge of the calorie deficit. But if he’s hunting hard, you will still see more and more rib as the season progresses.

Solution #2
Unlike humans, who rely on simple carbohydrates for quick energy, dogs get theirs from fat. If you can’t resist giving Gunner something during the hunt, give him a high-fat snack that won’t fill his belly. You can make your own, or simply offer him some of your salami sandwich (just the meat). There are plenty of commercial versions out there in tubes, droppers, and blocks. The key is low volume, high fat to keep the belly as empty as possible. I like an imported product called “Kronch Pemmikan,” dominating the fat-content field at 59 percent.

I also like to supplement my dogs’ nightly feed with extra fat. You want to be careful about how much fat, as there is a risk of pancreatitis, but a tablespoon of butter, olive oil, coconut oil, or a commercially available powdered pork fat product will re-fuel his metabolism without over-filling his belly.

Some of the best hunting occurs after the wimps have called it a season. Football playoffs, snow, and cold have a way of winnowing the field, leaving it to guys and dogs willing to pay the price, in calories. Just make sure you repay that debt when you can. Your dog will respond with a harder hunt, deeper into the winter.