The Weirdest and Wildest Stories of 2021 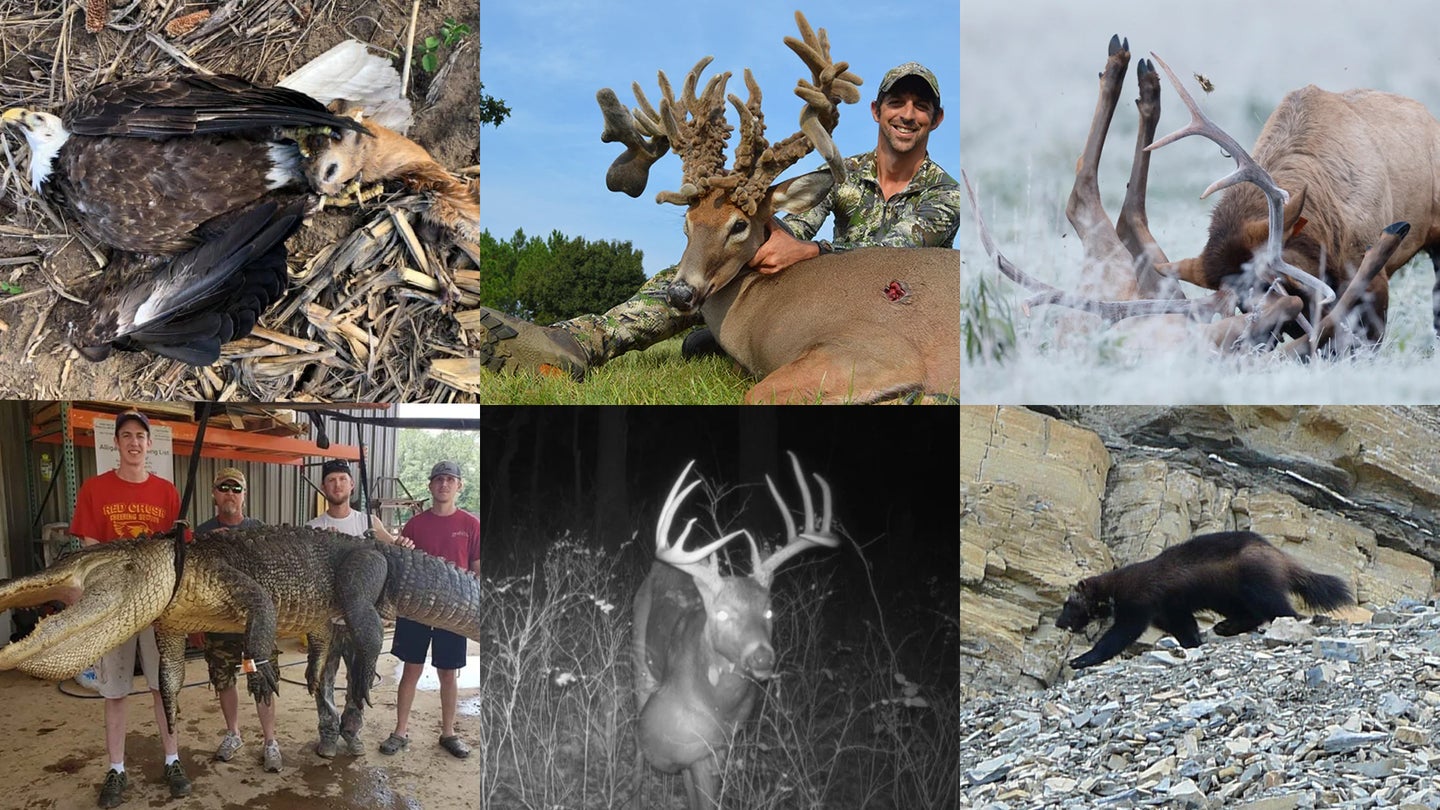 We covered a lot of strange stories this year in the hunting and fishing world. Outdoor Life
SHARE

Spend enough time in the woods and you’re bound to come across something unexpected. Sometimes it’s wildly fascinating, other times just straight-up weird. The same could be said for spending time on the internet. After all, it takes a lot less time scrolling online than it does hiking outside to stumble upon something that makes you scratch your head and think, “What in the…” Lucky for you, dear reader, our editors spend countless hours walking in the woods and trudging through the virtual jungle of the hunting and fishing world. Whether it’s a tale told by a hunter, a sequence of spellbinding photographs, or a shocking news story involving rabid cats, giant gators, or off-duty cops, there’s no doubt that we’ve reported on some bizarre stories this year. Here are some of the weirdest and wildest.

Wolverines Chase a Hunter’s Buck Off a Cliff

For bowhunter Aaron Van Noy and his hunting partner Kyle McGill, the mule deer hunt they experienced in Washington’s Glacier Peak Wilderness this September started out normal enough. They spotted a buck on the first afternoon, and then stalked within range of the deer. But the muley didn’t go down at the shot. Instead, it ran a short distance before bedding down in some cover. Not wanting to bump the buck, the two hunters backed off the blood trail, and they decided to track the deer the following morning. Which seemed like a fine plan…until Van Noy watched from camp as three wolverines appeared and headed straight for the last place he had seen his deer.

What happened over the course of that night will remain a mystery, but Van Noy and McGill ended up finding their buck the next day at the bottom of a 150-foot cliff. From what they gathered, the trio of woleverines chased the wounded muley all the way to the cliff, where the terrified deer leapt off the cliff rather than be eaten alive by a gang of some of the rarest and boldest mammals in North America.

“It sems as wild as it could possibly get,” Van Noy said of the experience. Read the full story here.

Grizzly bears try to kill mountain goats all the time. It’s in their DNA. Of course, they don’t always succeed, and goats will often scramble up a cliffside where they’re able to escape the bear unscathed.

A mountain goat turning the tables on a grizzly bear, however, is exceedingly rare. So rare that it’s difficult to wrap our minds around a goat actually defeating and killing a grizzly in close combat. But that’s exactly what wildlife ecologists say happened in Yoho National Park in British Columbia this summer, when their forensic analysis revealed fatal wounds in a female grizzly’s armpits and neck “that were consistent with the size and shape of mountain goat horns.”

So that’s what those horns are for. Read the full story here.

Photos: A Rutting Bull Gores a Cow Elk to Death

Wildlife photographer Joe Subolefsky called the sequence of events that he captured in Great Smoky Mountains National Park this October “one of the most brutal acts between animals I have ever seen in the field.”

The photos that Subolefsky took that day reveal just how aggressive and violent bull elk can be during the heat of the rut. One moment the bull is trying to mount a cow, and the next he is over the top of the cow and goring her to death with his antlers.

“The experience allowed me to witness the raw power of wildlife, and it was a reminder that Mother Nature can be harsh and unforgiving,” Subolefsky writes. See more of the incredible photos here.

The bizarre poaching case involving a garden of 30 or so buried deer skulls in Arkansas was closed in 2016, but Arkansas Game and Fish released details surrounding the case this October. As it turns out, a series of complaints and tips from concerned citizens finally led wildlife officers to the property where the skulls were buried.

Officers eventually discovered that five individuals were behind the egregious string of wildlife violations, and that the poachers were trying to use the low-maintenance method of making European mounts by burying the heads and leaving the antlers sticking out of the ground.

In addition to the 30 whitetail deer heads, turkey parts, and raptor talons they found on the property, officials confiscated 14 guns, three bows, and a set of night-vision goggles. Read more about the poaching bust here.

A poaching incident that occurred in Louisiana earlier this month had plenty of shock value—not because of what was poached, but because of who was doing the poaching. Shooting two antlered deer from a vehicle while trespassing at night is certainly nothing to look past, but it’s even harder to ignore when that vehicle is a police cruiser.

And while this realization was a shock for the wildlife agents that arrived on the scene, they were even more surprised when they opened the door to find an off-duty police officer, a convicted felon, and two other accomplices sharing the cruiser. Read the full story here.

Mississippi Processor Finds 8,000-Year-Old Relics in the Belly of a 750-Pound Gator

Alligators have a habit of eating some very strange and totally inedible things. From spark plugs and rocks to dog tags and cypress knees, people have found some weird stuff in the bellies of these giant, prehistoric scavengers. So when Shane Smith, owner of Red Antler Processing in Yazoo City, Mississippi, examined the stomach of a 13-foot, 750-pound gator this September, he expected to find an inanimate object or two. He just wasn’t prepared to discover two legitimate artifacts dating back tthousands of years.

He took these discoveries—a broken stone arrowhead and a heavy, tear-drop shaped object—to a local expert. The expert confirmed that the broken arrowhead was actually an atlatl dart point that was made between 5,000 and 6,000 B.C., and that the second object was a 3,800-year-old plummet that was likely used as a tool for fishing. Read the full story here.

It’s fairly uncommon for a hunter to find a dead bald eagle on the ground these days, much less a dead bald eagle with a head still gripped in its talons. But that’s exactly what turkey hunter Nearl Herrman of Barron, Wisconsin, came across when he was walking around scouting for gobblers this spring.

Herrman snapped multiple photos of the eagle, which show the bird’s talons locked into the skull of a fawn-sized whitetail deer. He then contacted an officer with the Wisconsin Department of Natural Resources, who took it to a local office for further inspection. Read about Herrman’s bizarre find here.

Back in October, bowhunter and Heartland Bowhunter cameraman Steve Leeper started keeping tabs on a big 11-point buck with a cellular trail cam in west-Central Missouri. After leaving town in November, Leeper kept receiving photos of the buck, but something had changed: the photos now showed a large mass on the deer’s right shoulder. More photos revealed that the mass was growing at an alarming rate, eventually reaching the size of a basketball.

When he returned, Leeper assumed that the buck was injured, and would likely die if left to its own devices. Determined to find the deer, he hunted hard through Thanksgiving and eventually ran into the buck in early December. Read the full story of his hunt, and what was wrong with the buck, here.

Injured Doe Checks Into a Hospital

A doe that was hit by a car on a Louisiana roadway this fall didn’t want to wait for someone to find her. Instead, she ran inside a Baton Rouge hospital, and then up the down escalator to the second floor, where she was restrained by nursing staff. Louisiana Department of Wildlife and Fish officials arrived on scene to sedate and remove the animal from the hospital. The deer was then put down due to its injuries, and wildlife officers would later determine that the doe was likely hit by a car on nearby Essen Lane. Watch the video here.

You might like trail cameras or you might hate them, but you can’t argue with the fact that these handy little devices capture some amazing wildlife photographs.Take, for example, the sequence of photos that New England bowhunter Dave Morel captured of a curious bobcat that picked a fight with a scent dripper. (Spoiler alert: the scent dripper survived the encounter.) See the photos and full story here.

A home security camera in North Carolina struck internet gold earlier this year when it captured the encounter between a suburban couple and a rabid bobcat in their driveway.

Nearly 13 million people have watched this 46-second clip since it was posted to Twitter in April, and we encourage you to become one of them by checking it out here (with the sound turned on.)

We’ve come across some bizarre bucks, but the cactus buck that was shot by Benny Overholt of Macon County, Georgia, is certainly one of strangest-looking trophy bucks we’ve seen this year. Overholt started seeing the buck on trail camera last season, and photographs over this summer show that the deer never shed its velvet antlers. Instead, the giant rack just kept growing.

Overholt arrowed the buck, nicknamed “Velvet”, on the second day of bow season this year. The deer weighed 186 pounds dressed, and although it will be nearly impossible to officially score his unusual antlers, it’s likely that the buck has more than 200 inches of rack. Read the full story here.

We are constantly learning more about the planet we inhabit, thanks in large part to the scientists and researchers who spend their careers studying the natural world. Research from the Monterey Bay Aquarium Research Institute that was released this June reveals that the largest migration on Earth happens in the ocean, and it happens every single night. That migration involves the millions and millions of marine animals, including fish, squid, and crustaceans, that swim toward the surface to feed at night and return to the twilight zone—which stretches from 660 to 3,300 feet deep—at dawn. Learn more and read the full story here.

This photo series brings us back full circle to predators doing predatory things in the wild. Captured by Wyoming-based naturalist and guide Rafael Sandoval, the photos show a 7-foot sow grizzly chasing, catching, and killing a wild elk calf. The mama bear then shares the kill with her cubs.

The huge sow—known as Grizzly 399 to the Yellowstone Interagency Grizzly Bear Study Team—is more than 20 years old. She lives in Grand Teton National Park and the Bridger-Teton National Forest, and this isn’t the first time the famous bear has been caught on camera catching and killing an elk. See the rest of the photos here.