How to Cut and Cook Wild Hog Bone-In Pork Chops

With whitetail season pretty much in the rearview mirror, and turkey season just a glimmer on the horizon, our thoughts... 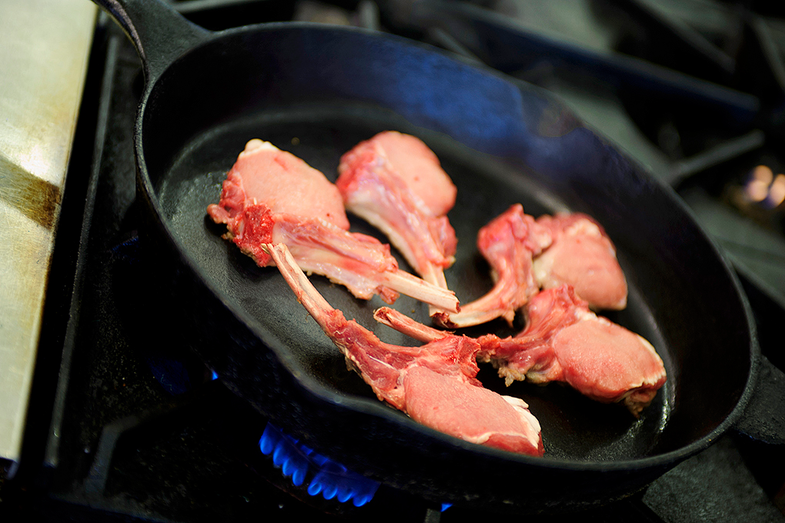 With whitetail season pretty much in the rearview mirror, and turkey season just a glimmer on the horizon, our thoughts this time of year tend to turn to hunting non-game species. And if you’re in the South, this probably includes feral hogs. While the exploding population has justifiably earned a “whack ’em and stack ’em” mentality among avid boar hunters, other folks venture into the Texas mesquite scrub in search of a single animal to put on the table. Personally, I experienced such a hunt several months ago. It yielded one of the best eating wild meats I’ve ever harvested and prepared. (You can see how to break one down here.)

From a culinary point of view, wild pig can best be described as “porkier” pork. It’s lean, and very good eating. It’s how domestic pork used to be 100 years ago before we started dramatically altering a hog’s caloric and chemical intake.

After breaking down the hog into those five big cuts, you can further break it down into cuts like wild boar chops. Here’s how I did it, along with a super simple cast-iron seared recipe for cooking them.

Start with the loin of the animal, along with an assortment of sharpened knives and a meat saw, and a scraper.

Find the spot along the loin where the rib bones start. While it’s probably obvious, the ribbed part of the loin will produce bone-in chops, and the rib-less part will be boneless loin chops. Instead of chops, you could keep the loin intact and prepare in a different way.

Stand the loin upright and make a downward cut where the ribs end separating bone-in and boneless chops. You wont be able to cut all the way through with your knife because of the backbone.

There are a few ways to completely sever the loin. You can saw through it, or give it a hearty whack with a cleaver. Since my wild pig was small, I simply hung it over the edge of my work surface and gave the backbone a snap.

Here you can see the snapped backbone with the loin still attached. Once the chine is removed, this section will produce boneless loin chops.

Take the meat saw on the ribbed section of loin and saw through the chine.

Even when using a meat saw the backbone can be pretty stubborn and may need some persuasion. This is a good time to stand the section on end and give it good blow with the cleaver. Watch your fingers though.

Now you could just cut between each of the ribs and be done with the bone in chops. However, I like “Frenched” chops. Basically it means removing the membrane and extra tissue on, and between, the bones to expose a clean little bone handle. This is often done with lamb, too.

Following a knife cut to mark how much bone you want exposed, pull back the tissue and membrane. This step may require a little extra time with a small knife to really get the bones clean. You might note that on this animal two of it’s ribs were fused creating a bit of a knuckle (fourth rib from the left.)

Once you are satisfied with the bones, cut between the ribs to create the bone-in chops.

Heat up a cast iron skillet, sprinkle the chops with a smidgen of salt, and sear over a medium/medium high flame for 3-5 minutes.

Flip the chops and sear for another 3 minutes. Time on these is variable depending on chop size and intensity of your flame.

Once chops are done, remove to a cutting board, drizzle with a good olive oil, and sprinkle with a good sea salt like Maldon. Let the chops rest for a couple minutes to absorb the olive oil.