How to Hunt Late-Season Geese on Public Rivers

When winter hits, migrating geese flock up on tributaries 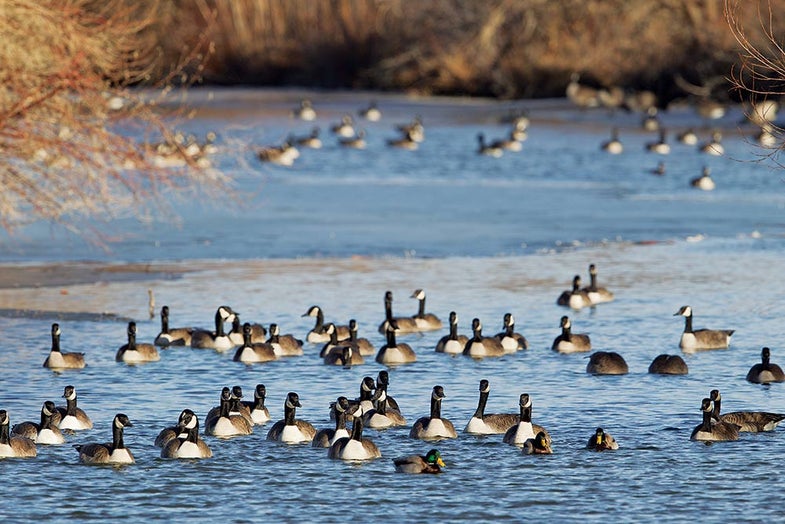 Canadas mix with mallards on a small river during the migration. Donald M. Jones
SHARE

The most tedious part of hunting Canada geese is driving long miles to scout and asking for permission to hunt private ag fields.

But when the first blast of winter hits and freezes marshes and ponds, geese flock to rivers to roost and loaf, opening miles and miles of opportunity to the public-water hunter. This is Cabela’s pro staffer and waterfowl nut Jonathan Lewis’ favorite time to chase honkers on his home turf in New York and Pennsylvania.

A quick side note: Check local water-access laws (they can be complicated) because many states allow you to hunt from a boat if it can be concealed by vegetation, or from shore if you stay below the normal water-level line.

Lewis keys in on island gravel bars or points that create a pool of slow-moving water with enough space between shorelines to allow the birds to work. Geese love to use these spots to rest as they migrate south. Search tributaries off major rivers (like Pennsylvania’s Delaware), which are migration highways for waterfowl.

“When I find a spot I like, I scout the weather more than the birds,” Lewis says.

He waits for a strong cold front that will bring down migrators and prefers to hunt on the tail end of those winter storms. That’s when the river will fill up with fresh birds.

Get to the spot well before daylight to set a spread of as many decoys as you can fit in the boat.

“It’s okay if you bump a couple dozen roosting geese off the spot, because they might come back later and bring 300 more with them,” Lewis says.

Read More: Tactics for Hunting Public Land and Stories About Why We Love It

He runs about three dozen floaters in the water, and a mix of sleeper decoys, full-bodies, and windsocks (because they are packable) set tightly together on the gravel bar and in the shallow water around it. The goal is to mimic a large flock of resting geese.

Lewis will settle for a wind at his back, but a crosswind is even better. Ideally, he’ll hide in a layout blind in knee-high cover on the gravel bar. But he’ll also hunt from a boat blind or natural cover along the shore if there’s not enough cover on the bar itself.

There are usually good flights in the morning, but the action is hottest when geese come off the fields to water during midday.

When the geese do start to work, go light on the calling, Lewis says. Resting birds are much quieter than feeding ones, and soft honks and clucks are often all it takes to make geese commit.

“You never know what you’re going to get on a big migration day,” Lewis says. “But there’s always more adventure when you’re hunting on the river.”