Nope, these aren't internet hoaxes. They're just the strangest animals encountered during a lifetime of hunting across the world 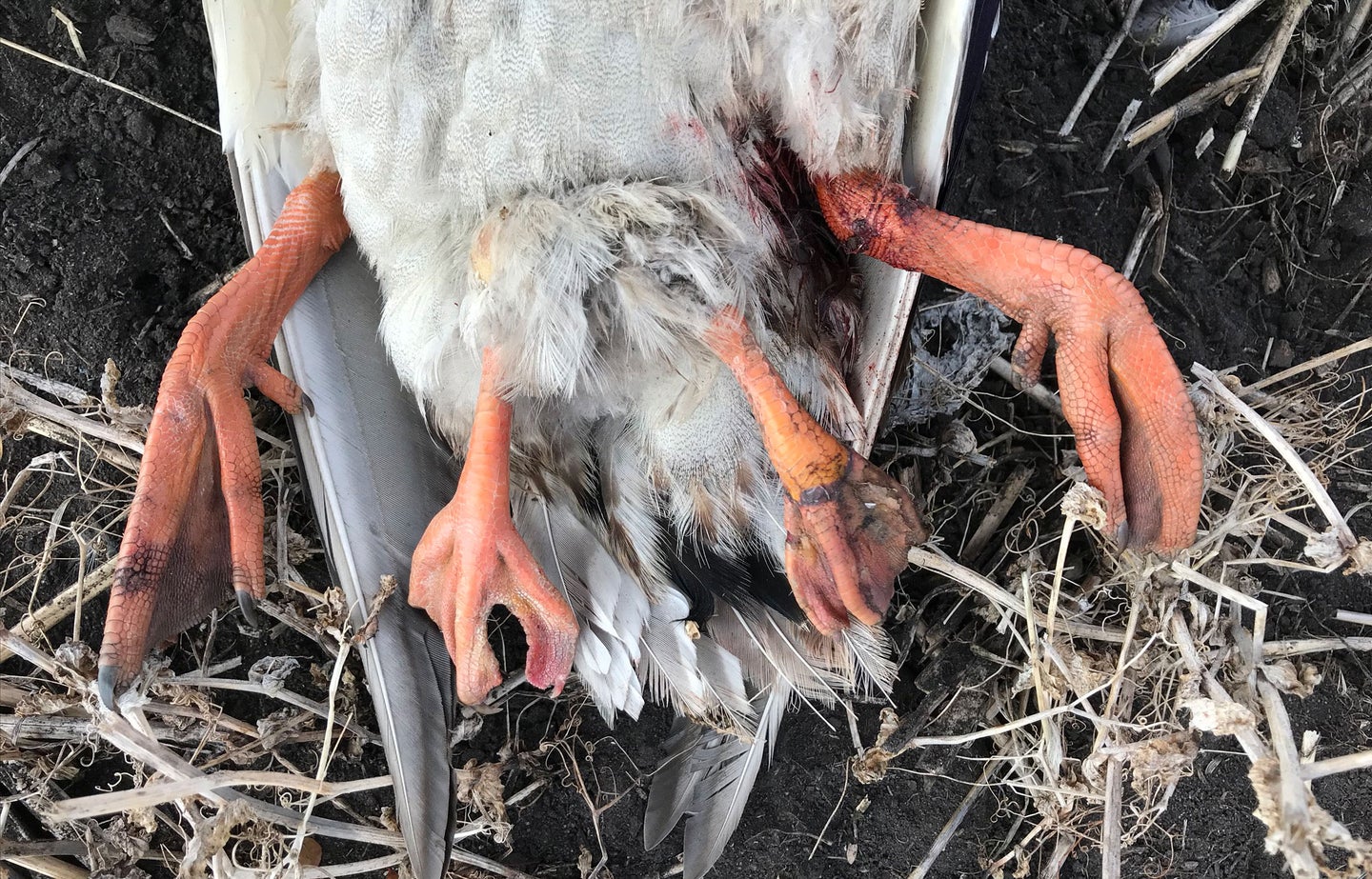 The author encountered this four-legged years ago during a field hunt. Brad Fenson
SHARE

If you spend enough time in the field, chances are you’ll eventually encounter a strange critter or two. Mutants, albinos, melanistic creatures, animals with extra appendages, hybrids, and critters with bizarre injuries are often even more memorable than those perfect trophy specimens.

I’ve been lucky to hunt all throughout the world over the course of several decades. Amid all those hunts, I’ve stumbled into some truly odd animals. Here’s a look at the weirdest.

A buddy and I were on a week-long waterfowl adventure, and were picking up the ducks at the end of our shoot. Limits of big honkers, specks, and a mix of mallards and pintails kept our shotguns roaring. Everyone was busy working when a yell came from the edge of the decoys.

“Which one of you jokers put this pair of pigeon legs on this mallard,” asked a buddy.

He had picked up a young drake mallard and, taking a second to look at it, discovered that it had an extra set of legs dangling off its abdomen. The extra legs made our buddy shake in disgust, immediately throwing it to the ground as though it was a poisonous snake. Sure enough, the young mallard drake had four legs. That’s right, a four-legged duck! What are the odds?

The duck was the talk of hunting camp, and several of us posted pictures on social media, and the word spread like wildfire. People reading the posts accused us of pulling a hoax, and many called the photos fake. However, some chicken and duck farmers chimed in to say it was not all that unusual with fowl. There were offers to mount the bird, send it to the Smithsonian Institute, or donate it for science. In the end, our friend from Ranchland Outfitters decided to get the bird mounted, and now he has quite the conversation piece.

Hunting in a harvested pea field in Saskatchewan last year, I ran from the blind to retrieve downed birds and set them on the ground in the blind. Taking a second to catch my breath, I looked down at one of the birds and immediately saw something different. There was a drake mallard and pintail in the mix, but a third bird did not fit either profile. I quickly examined the bird and proclaimed that we had taken a mallard-pintail hybrid. The hunt stopped as everyone wanted to see the unique duck.

READ NEXT: The 8 Coolest Hybrid Ducks and Geese

Hybrid ducks are relatively common, but most hunters will never see one. Chasing speckle-bellied geese in central Alberta, we found a speck-snow goose cross. The uniquely colored bird stood out in the flock, and we studied it closely with a spotting scope. We set up to hunt that bird three times, and although we saw it in larger flocks of geese, it never came close enough for a shot.

A special hunt in Alberta takes place at the Camp Wainwright Military Base each year. It was started as a biological hunt to gather information on deer, and one study was set to determine if whitetails and mule deer crossbreed. I was on the base when a hunter showed up at the check station to find out that he had shot a true hybrid. Biologists were quick to tell anyone trying to identify a hybrid deer by looking at the head or antlers that “you’re looking at the wrong end.”

Another good characteristic to suggest hybridization lies under the tail. A mule deer is naked under the tail to the tip. A whitetail has hollow hair on the underside of the tail. A hybrid is partially to halfway naked depending on whether it is a first generation hybrid.

Not all animals with white coloration are albino. A piebald or pied animal has large patches of hair with no pigmentation. The color of the animal’s skin underneath its hair also has no pigment under the white patches. An animal with albinism lacks pigment in the skin, hair, and even eyes. A true albino will have red or pink eyes. The same goes for melanistic animals, which are very dark or solid black, with the opposite traits of an animal with albinism and solid patches of pigment. Piebald is often referred to as calico.

Hunting in south Texas, I came across a piebald deer that nobody on the ranch had seen before. The buck sported mature antlers, and it did not take long to decide to hunt the uniquely colored buck. I have seen several animals with calico markings, but never a true albino.

Hunting in New Zealand, it was not difficult to spot a melanistic gobbler in a flock of wild turkeys. The dark pigments usually make a melanistic critter fully black. This turkey had a single white feather on its back but was otherwise jet black. I successfully shot the bird from a flock of about 20 other turkeys with regular coloring.

Albino critters are often considered to possess special significance, power, or spirit by some. White bison are considered sacred by First Nations. In parts of the country, unique whitetail deer or black bears are often protected due to missing pigments, making the unique creatures appear albino. The genetic traits can be passed on to influence localized populations.

Over the years, I have come across a few animals with different traits: a white porcupine that was a true albino with pink eyes, and white groundhogs and ground squirrels, with dark eyes.

Hunting in the Sandhills of Nebraska, I harvested a tremendous non-typical mule deer, which could be considered weird, but looked normal compared to the buck my buddy ended up taking. I tagged along with my friend and we spotted two whitetail bucks. It didn’t take us long to sneak across the grassy hills to cut the distance. As luck would have it, a truck drove by the shelterbelt where we had seen the bucks, chasing them from cover. The pair of bucks ran toward us, and I couldn’t believe my eyes. A big ten-point buck sported antlers that would score beyond 160 inches. The other was a freak, with so many points that it was impossible to count them when the animal was on the run. Of course, my buddy shot at the freak, missing clean on the first shot. I held my breath, hoping to see the deer up close, and a second shot killed the deer cleanly.

We raced to the deer and then stood in awe of the unique buck, which had knocked some junk off its rack in the tumble. On closer inspection, the buck was missing its testicles, and the lack of testosterone meant the antlers kept growing and never dropped like a typical buck.

The growth was more like a fingernail than hardened bone. A core grew from the deer’s head like you would see with horn growth (not antler growth). We picked up the pieces, and the unique Medusa-like buck now adorns my friend’s wall.

Freaky antlers and non-typical growth are always exciting to see. The unique characteristics often appeal to hunters, and an animal sporting non-typical or asymmetrical growth, is often targeted. It helps when the antlers are on a mature animal. While hunting in South Dakota, a wide-antlered buck caught my attention, but the long droptine off the right antler made it a must-have buck. Luck was on my side, and the buck eventually chased a doe up the draw I was watching.

Bull With a Broken Skull

Hunting the third rifle season on public land in Colorado, I was blessed to find a big six-point bull bedded in a burn area. I watched the bull for half an hour, hoping it would stand and provide a shot. Thank goodness it stayed in its bed, because an enormous bull eventually stood up from lower down the hill that was not visible before. I saw points, mass, and height that made my heart race with excitement. A good shot sent the bull crashing down a steep slope. Upon arriving at the bull, I noticed it was more unique than I had realized. After inspecting more closely, we found that the bull had broken its pedicle and antler base out of its skull and it grew back pointed out of the elk’s forehead.

It is impossible to determine how many sets of antlers the bull grew out of the damaged pedicle. But the bull was as giant, and if the antler were growing in the correct portion of the skull, the bull would have shown tremendous width. Still, it’s an incredible trophy that I’ll never forget.

You never know what you will see when hunting. Unique opportunities and animals could show up anywhere and at any time. Often, a hunter will have to look closely to ensure they know what they are looking at before shooting. An albino goose, for example, may look more like a swan. Many waterfowl hybrids are hard to identify on the wing.

Knowing when regulations allow for the harvest of uniquely colored critters is also essential. Kermode bears on the Pacific coast are protected because of their white or cream-colored hides. Deer lacking pigment in the hair are protected in some jurisdictions for social reasons. Some hunters would love an opportunity to harvest an odd-ball critter, while others are disgusted. A duck with four legs can create a stir, and it was a good thing the extra appendages were not spotted until after the duck was picked up at the end of the hunt. Some of our hunting crew would not touch it.

With social media, there are plenty of hoaxes when it comes to unique animals. However, the truly weird and wonderful animals should be looked at as a celebration of time in the field and one-of-a-kind stories that few hunters will ever get the chance to tell.