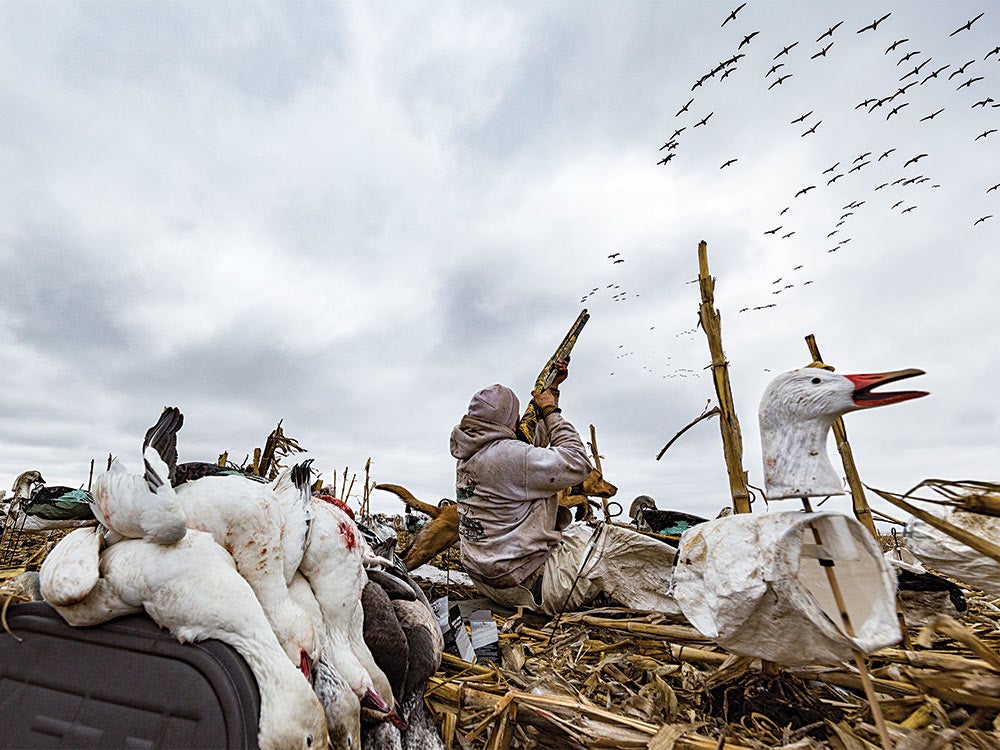 A spring hunter pulls up on a flock of incoming snows. Matt McCormick / Images on the Wildside
SHARE

Spoiler alert. There is no piece of magic gear, secret e-caller sound, or decoy hack to trick snow geese into gun range. Your best chance for a barrel-burning, birds-in-your-face shoot is smart preparation. You have to find the right flocks and choose the best days to hunt them. Just ask Jordan Garber, a spring snow goose guide for Habitat Flats. He’s created a basic checklist to up the odds on light goose hunts, and it works. Here’s the scoop.

“Finding the right birds is the most important thing,” Garber says. If multiple groups are in the vicinity, he’ll glass each of them and dial into the mass with the biggest number of young birds. Snow goose hunters call them juvies, and those smaller, grayish geese are easier to decoy—and they often bring in older birds behind them. Numbers of smaller Ross’s geese are a good indicator of a gullible flock too. If the geese are on a roost pond or refuge, Garber looks for a field to hunt downwind, based on the next day’s wind direction. “A mile from the roost is ideal,” he says.

Good decoys pop in the sun, yet those harsh rays also help conceal small imperfections on the ground, Garber says. Bright conditions make the spread more attractive and hiding easier. “Look across a field on a gloomy day, and little things like seed bags and baling twine will stand out, compared to a sunny day, where you can’t see a thing,” he says.

Wind is a good thing for any waterfowl hunting, but it’s especially important when you’re after snows. These wary birds tend to hover on flat days and eyeball every inch of the decoy rig. “A strong wind forces them to make a quick decision,” Garber says. “They can’t float around. They have to commit.”

Garber likes a big, classic teardrop- or ice-cream-cone-shaped decoy spread, with a mix of 1,200 or so full-body and windsock decoys, plus three rotary machines. “I’m not a fan of a big kill hole in the spread,” he says. “It looks unnatural.” Instead, he salt-and-peppers the landing zone with singles, pairs, and triples to simulate geese that have just landed. From the air, the hope is that his mass of feeding fakes looks thinned out where he wants the birds to land. On especially windy days, he keeps most of the spread behind the hunters, because geese tend to stop short, but if the hunters are downwind, they’re still in gun range.

Garber doesn’t mess with hand-calling snows. He runs an e-caller playing tracks of feeding birds and tweaks the sound based on what he sees. When geese are on the horizon, he cranks up the volume to grab their attention. He tapers it down to a more realistic level as the birds approach. If working geese begin sliding off, he blares the sound at them again, sort of like a come-back duck call. Finally, he lowers the volume as geese set their wings to land.

Snow goose hunting is always an effort—and always a gamble. Just last spring, Garber and a few buddies took a freelancing trip to Saskatchewan. When they got there, the locals warned that the birds weren’t doing much. But by following the checklist, Garber and his crew had several triple-digit shoots. “When it works, it works,” he says. “In waterfowling, I don’t think there’s anything better.”