There’s more beef in the online hunting community than there is between rappers. Don’t get caught up in it 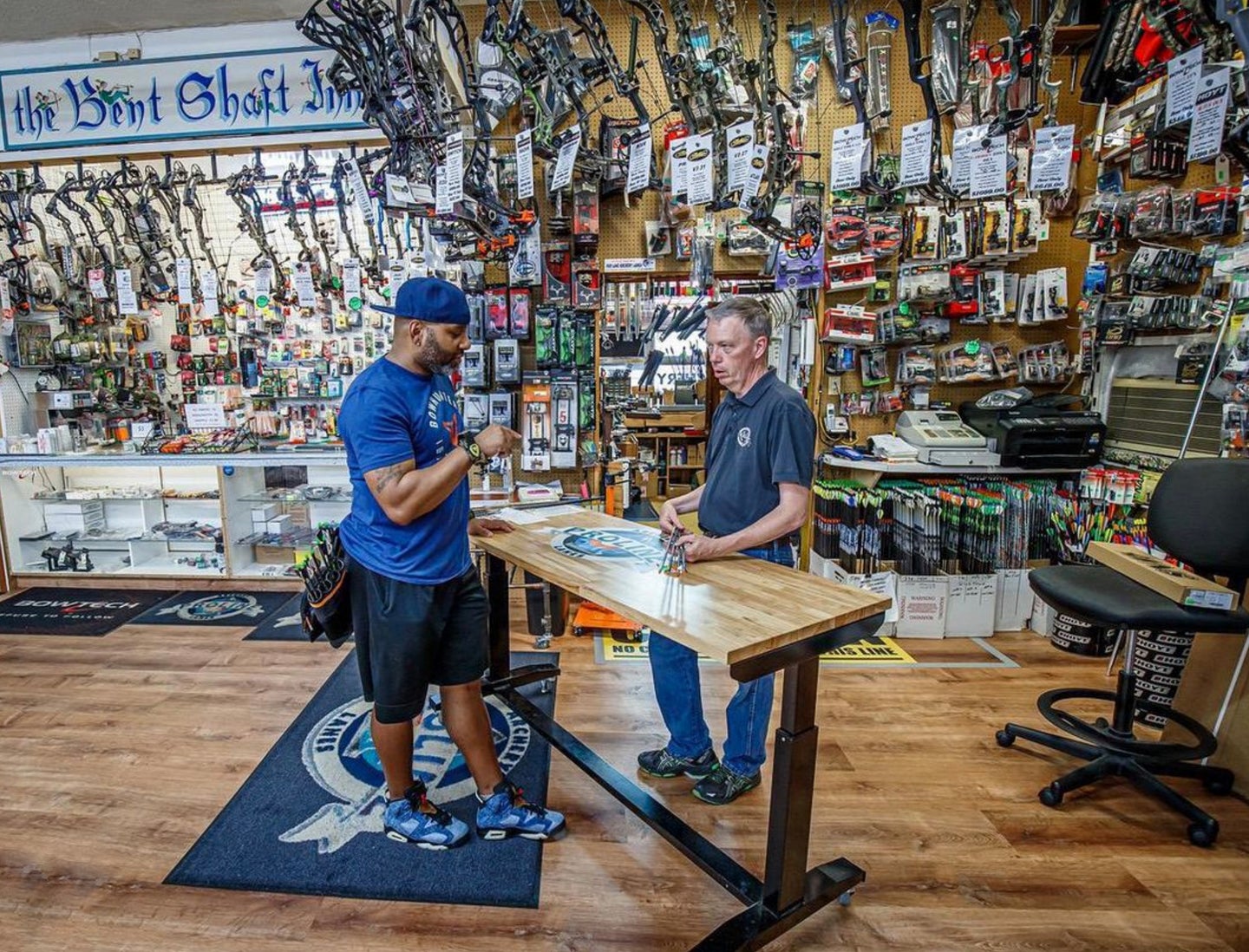 The author has picked up plenty of gear tips from social media, but he also knows talking to pros and bowhunters in real life is important, too. Rick Meoli
SHARE

I bought my first bow on an impulse, in the summer of 2017. It was a childhood fantasy fulfilled after walking the aisles of a big-box sporting goods store. But the idea of hunting with that bow never occurred to me until I discovered the Archery Trade Association’s Instagram account—while they were smack dab in the middle of their annual trade show. Wow, I thought. A whole convention dedicated to hunting?

I’m a bit of a nerd who, yes, attends comic book conventions every year. Little did I know that hunting trade shows take place all over the U.S., too. This was something I could totally get into. And I did. I’m still relatively new to hunting, with two spring turkey seasons and three deer seasons under my belt in the heavily-hunted woods of New York state. I’m an adult-onset hunter or, as I like to say because that sounds like a chronic GI condition, I’m late to the hunt.

Now because I have just a few seasons of hunting experience, you may ask, “Why should I continue reading this?” And that’s my very point: I’m a test case for how new hunters often approach social media. Because when I finally decided to learn about bowhunting, I dove headfirst into social media to meet other hunters and learn more about the outdoors. I relied on YouTube, Instagram, and various podcasts for my introduction to the hunting community. And this is what I’ve learned. I hope it can help guide my fellow adult hunters who are late to the party, and provide a little insight for the lifelong hunters who’ve been debating the merits of hunting social media.

Seek, and Ye Shall Find…Maybe

When I decided to bowhunt, the first thing I did was jump on social media. Why? I wanted to see if there were any bowhunters who looked like me and were from where I’m from. Who did I find? No one. I then conducted a Google search for the phrase: “list of famous bowhunters.” Not one person on the list was a person of color. Nor were any of the folks on the list from urban areas. I mean, how many middle-aged Black guys from large metropolitan areas do you know who bowhunt? Exactly.

What’s my point? Not all hunting-related photos posted on social media are there simply to stroke that hunter’s ego. My own social media account exists solely to allow people like me to see a middle-aged black guy from New York City share his journey on a road less traveled. Since creating my account, I’ve met four other hunters of color within the five boroughs of NYC. I’ve been able to help them start their own hunting journey. Representation matters. How can someone become something they’ve never seen? It’s only natural to seek out folks you can relate to. It makes a new adventure, like hunting, a little less nerve-racking.

By now, any new hunter or seasoned vet is familiar with guys like Cam Hanes, John Dudley, and Steve Rinella. I like to think of them as “the holy trinity” of bowhunting. And as popular and interesting as they may be, I can’t relate to any of them.

It may or may not be the same for you. Just don’t settle for role models who you don’t identify with. Reach out to different folks. Ask questions. (You’ll be surprised how many people in the hunting community love answering questions.) But be careful, too. There’s more beef in the online hunting community than there is between rappers. Don’t get caught up in it. Learn what you can, have fun with it, and try to follow legitimate hunters not for how often they kill something, but for the information they dispense along the way.

One of the platforms I used in my hunting “education” were podcasts. (And I’m not gonna front: I still listen to them. All day. Everyday.) They’ve been instrumental in developing my bowhunting vocabulary. All the phrases and terminology I needed to know were tossed around throughout the episodes I played. There was one podcast I listened to religiously. Although the group of guys were from a rural town, I could relate to them. They were funny as hell and, according to their stories, killed deer on the regular. So, when I noticed they were all shooting a specific bow brand, I was like, I’ve got to get me one of those! So I did. I figured if that brand was good enough for them, it would work for me. (There’s a sucker born every minute. I’m just a victim, I swear.) While it was a huge upgrade, I honestly didn’t shoot that bow any better than my old one. But I felt like I finally had a “legit” bow, and that made me a lot more confident when shooting. I also arrowed my first turkey with that new bow. So at the end of the day, that’s how I justify the purchase.

Social media influencers have been on the rise for years. The hunting community is no stranger to them, and the hunting industry usually has no qualms about “hiring” them. Some folks would have you believe that a good amount of the community is made up of mindless and gullible consumers. And sure, we “victims” exist, but we also learn plenty along the way. Critics don’t think we’ve figured out that maybe…just maybe…some of our favorite hunters aren’t hunting on public land? Or that there’s a load of work that goes into the hunt that isn’t captured in a caption?

I know the hunting influencers I follow also follow something: the money. Whatever gear they’re using is often, though not always, dictated by whoever is writing the biggest check (or, in some cases, any check at all). That product your favorite hunter is pushing this year? It may not be the same next year. So the next time you see your favorite YouTube hunter shooting some dope broadheads, do some research…and then do a little more. Trust me. Your bank account will appreciate it. Besides: At the end of the day, the hunter matters more than his gear. In the three years I’ve been bowhunting, I’ve purchased two bows, three different sights, and shot three different types of arrows. And I’ve shot well with all of them. Not because they’re such wonderful products, but because I practice shooting with them.

When you venture into the hunting world via social media, you will most likely come across posts that reek of privilege. I’ve found that that content can be created by folks who believe that hunting is supposed to be done a certain way: their way.

When you come across these gatekeepers, you’ll recognize them right away. They’re the people who will tell you how often, how far, and how hard you’ve got to hunt in order to call yourself a hunter. If you come across anyone like this, on any platform, immediately take advantage of the “Block User” feature. Trust me. You don’t need that kind of negativity in your life. You get to decide whether you’re a hunter or not. And you do that by hunting.

A couple of years ago, I was a guest on a podcast where I was called a “fucking unicorn” because I was a Black guy from a big city who wanted to bowhunt. I didn’t fit the idea of the typical hunter. But there are many people like me. Folks who weren’t born into a hunting family. Folks who have never known hunting as a tradition, or even a lifestyle.

Read Next: Is It Time for Hunters and Shooters to Give Up on Social Media?

At the end of the day, social media is like The Force. It can be used for good or evil. Your experience with it depends on what you’re looking to accomplish. If you’re looking to break into the hunting industry, social media is an awesome marketing tool. If you’re an experienced hunter, it’s a great way to reach out, educate, and share your experiences. If you’re new to the game, it’s a wonderful means for learning, and can help you form some lasting relationships. There’s no one way to hunt. You don’t have to travel far and wide for your hunts to be a hunter, and you don’t have to buy the hottest gear. Don’t be pressured into someone else’s belief of what hunting should be. Instead, have fun and focus on what hunting can be for you.