Turn the transition season into your best season 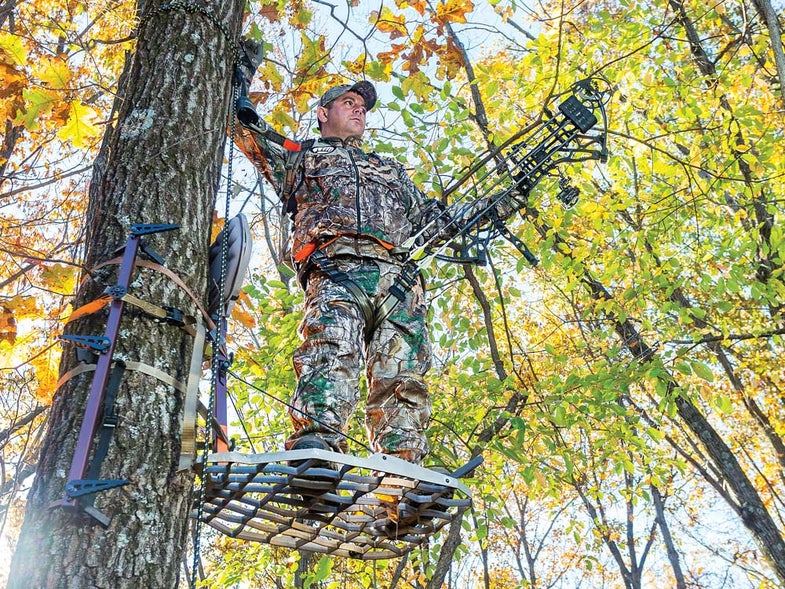 October: The month bowhunters, especially whitetail fanatics, eagerly await. And, at times, it’s a month that can’t end soon enough for many of them. One day, there are deer everywhere. The next, you’re lucky to see a button buck. Bowhunting for October whitetails can indeed be an exercise in frustration. What it needs to be is an exercise in transition. But if you follow this week-by-week plan, you can stay on deer all month long.

Bow season, for much of whitetail country, is finally open. Everyone with a tag is ready to rock, and the majority of them will do plenty of damage this week—not to the whitetail population, but to their chances of killing a big, mature buck.

As much as you’d like to make the most of every moment of the season, now is the time for caution. Ease into things. This week, feed-to-bed patterns are still in full effect, so most deer activity will happen under the cover of darkness. Your best chance of catching that movement is, of course, during the first and last hour of daylight.

Morning hunts are risky during this time frame. That buck you captured on your trail camera all summer? The odds of bumping him on his way back to bed as you are heading into your stand are high. And that’s precisely what overeager hunters do the first few days of the season. A safer option is to stick to afternoon hunts, and only hunt those stands that allow you to get in and out of the woods without blowing out deer. Plan your entry and exit strategies carefully.

Bed-to-feed patterns remain dominant, and morning hunts are still risky. However, falling acorns and the maturation of agricultural crops can change things. When soybean fields begin to yellow, deer find alternative food sources. If you’ve planted food plots, these can begin to shine now. Productive oaks, if the mast crop wasn’t a bust, suck deer off fields and into the timber. And hunting pressure has deer changing their preferred locales and hangouts.

This is a time of significant transition, and deer sightings can become scarce if you don’t adapt as well. Mixing in some morning sits near acorn-dropping oak trees can be productive, but be very careful about your approach.

Afternoon outings should still focus on primary food sources, but last week’s top draw may not be the same as this week’s.

The rut is drawing near and there will undoubtedly be reports of “rut” activity this week in the form of chasing and scraping. The problem? That chasing is likely to be done by young, immature bucks, and the majority of scrapes are being worked after dark. In other words, it’s not the rut—not yet. Instead, it’s time to get those trail cameras in place on active scrapes to give you a solid inventory of the bucks that are hanging around in your hunting area.

Your hunting tactics should mimic those of the previous week, though morning hunts can be a bit more productive now as bucks may linger in the open a bit later in the day, working scrapes and rub lines as their testosterone levels rise. If a major cold front is in the forecast, don’t miss out on the opportunity. Hunt.

Read Next: How to Beat the Dreaded October Lull

Yes, this period technically covers more than a week. But that’s a good thing, because this can be one of the best segments of the entire deer season.

Now is the time to focus on those bucks showing up on your trail cameras. Morning outings remain a gamble, but it’s time to roll the dice. Some does will come into heat this week, and those first whiffs of estrus in the air will put bucks on their feet in daylight. Don’t expect to see all-day, full-blown chasing quite yet. But, make no mistake: The stage is set and bucks know the time is near.

This is an excellent week to work calling and rattling into the mix, especially if you see a bruiser on patrol. Food sources are still key, as bucks will be checking those areas for the first willing does. Morning sits can be productive. Plan on staying at least an hour later into the day than in previous weeks. Evening sits should also focus on the best available food source. Active scrapes can be good as well if your trail cameras are showing daylight activity. The best week of the month has arrived. If you don’t tag out, fear not. November is next.