How a New Yorker Falls in Love with Bowhunting

A born-and-raised Brooklyn native finds his way to hunting, despite the obstacles of city living and an unfamiliar legacy 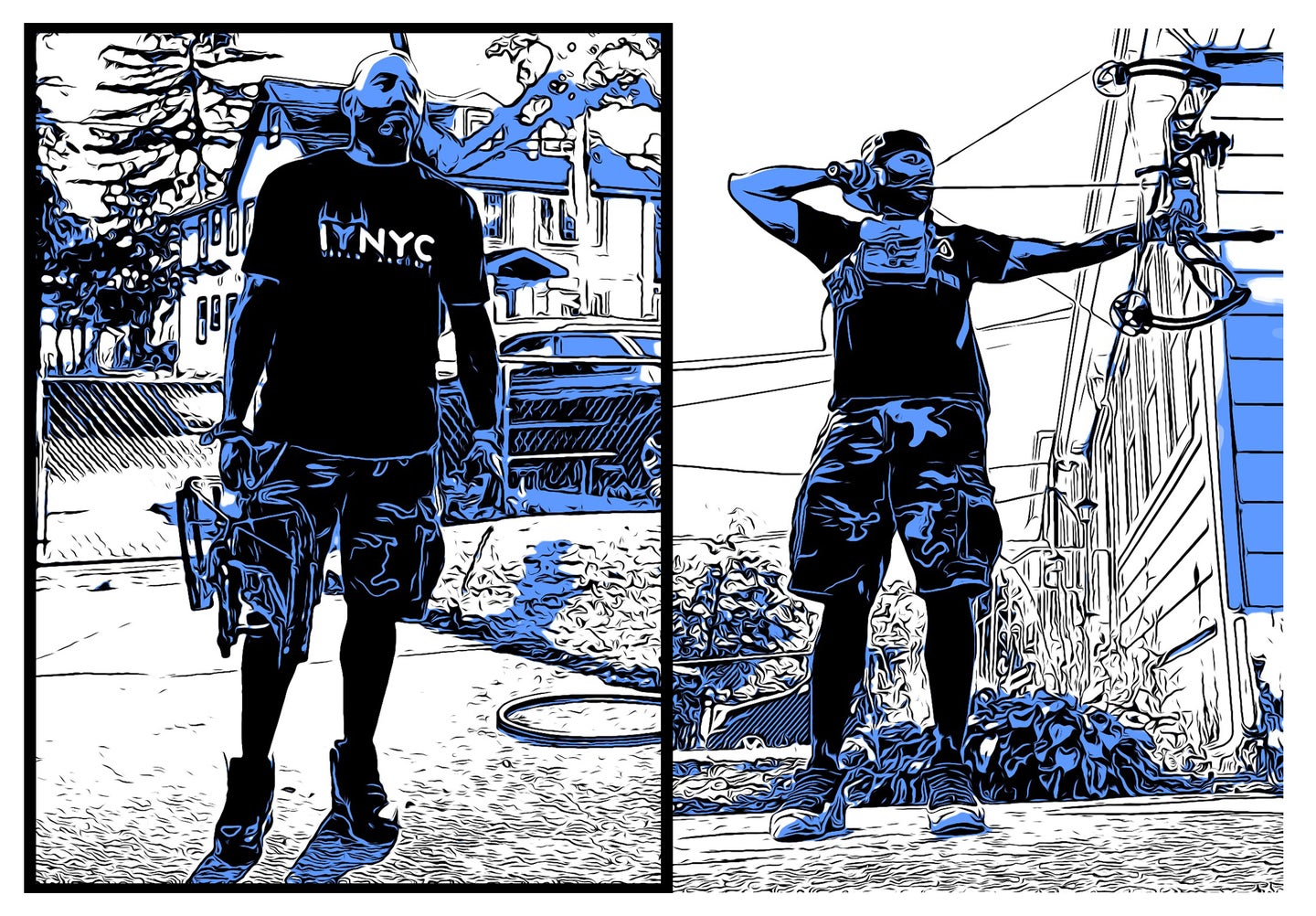 I’m sure you’re familiar with the phrase “adult-onset hunting” by now. They’re the words that describe the sport of hunting as taken on by a person later in life. I’m not fond of the description. It makes it sound like someone is experiencing a side effect resulting from the use of a prescribed medication.

But ever since becoming an adult-onset hunter, I’ve been inundated with so many stories of why hunters hunt. I’ve read about the budding conservationist who learns how hunting contributes to wildlife conservation, and longs to do their part. I’ve listened to podcasts about the hunter whose grandfather gifted him his first hunting rifle, who feels a duty to carry on the family tradition. On social media, I’ve come across the hunter, for whom, it is all a way of life, to fill the freezer or feed her family or both. Am I disappointed not to count myself among those listed above? No. My story is different.

I was born and raised in Kensington, Brooklyn. If you know anything about New York City, chances are that my old neighborhood probably is not on the list. To help you get your bearings though…it’s a few miles north of Coney Island, west of Flatbush, and just south of Prospect Park. Did that help? Probably not.

Either way, it’s a diverse community. Home to a large Hasidic Jewish population, the remaining residents mirror the members of the United Nations. I myself am the son of immigrants; both my parents are from Haiti. My closest childhood friends hailed from Mexico, Ecuador, and China. Such a culturally diverse “band of brothers,” and yet there was no talk of any family hunting traditions among us.

Read Next: I’m an Immigrant, a Veteran, and Finally…a Hunter

I could never stay indoors as a kid. I hated it. I had to be out and about. But that was insanely difficult, as my folks were super strict. Weekdays, even in the summer, were meant for homework, studying, and endless reading. My parents were all about education. They made themselves shining examples of what I could and should do if I only applied myself. They each held multiple jobs, put themselves through college, and received their undergraduate and graduate degrees. And with those degrees in hand, my parents found careers in their respective fields: my dad in education and my mom in finance. How could I ever argue with that? So, I didn’t. But I did find solace outdoors.

By “outdoors,” I mean anything beyond the apartment. I lived on the third floor of a six-story apartment building, and my outdoor options were limited. But New York City is well-known for its beautiful parks. If permitted, I could play basketball and handball all day long. I was also lucky to have a neighborhood youth center that I relied on heavily. But even there, neither archery nor hunting were a thing. And to be honest, those weren’t activities that I knew any kids of my race took part in.

High school was the same. The various jobs I held as a young adult couldn’t keep me indoors, either. If the job allowed me to constantly be on the move, I’d do it. I took on jobs as a messenger, a stagehand, even a restaurant door host.

Hunting wasn’t a thought. It wasn’t even a blip on my radar. Bows and arrows simply brought back memories of history textbooks with pictures of cave drawings that depicted ancient hunters. But they were also the weapons of myth I’d read about and loved. I’d held heroes like Hercules, William Tell, Robin Hood, King Arthur, and Sir Lancelot in high regard. In print or on film, the adventures of men like that appealed to me. But they were all white men. As for hunting? Have you ever seen the entrance of the American Museum of Natural History? Standing there is a massive monument to former New York Governor and U.S. President Theodore Roosevelt. The statue depicts him atop a horse while he is flanked by a walking Native American man on his right, and a walking African man on his left. That is exactly what hunting looked like to me.

Read Next: The Tale of Jake and Bell, a Hunting Dog Story You Haven’t Heard Before

It wasn’t until I accompanied my cousin to a big box store so he could buy some accessories for his own bow, that I had my first real exposure to hunting. A few months before this trip, he had purchased bows for himself and his daughter, and archery had become their weekend activity. Walking through this store had me in awe. While I’d had an archery lesson before, I’d never seen so much hunting equipment before. I’d never seen any hunting equipment before. So I bought a bow. For about a year, I popped in and out of local ranges. I never really shot consistently. I just couldn’t find the time to commit. Eventually, I bought my own target and started shooting in my mother-in-law’s driveway. My skill was increasing, and I looked to social media for tips, tricks, and any knowledge to help me improve further. The ATA show was taking place at the time, and popular folks within the hunting industry were posting all about bowhunting. All of a sudden, my eyes were open to a whole new world.

After all these years, the idea of me being a hunter had still never occurred to me. I had a bow. I’d been practicing regularly and becoming quite skilled. Why couldn’t I hunt? On social media, I’d come across many people of color who hunt. Their motivations for hunting are often steeped in southern tradition. As someone from a big city, I couldn’t relate to that part. So why did I start hunting, then?

Hunting is the great equalizer. Think about it. Race does not matter. Culture has no bearing. Current eating habits hold zero weight. To be here today, at some point in history, your ancestors had to hunt. That absolutely fascinates me.

I love science. Understanding a wild animal’s habitat is critical to hunting that wild animal. The last year and a half of hunting has allowed me not only to learn about the turkey and deer I’m hunting, but to learn about where they live.

I get to be outside. As I mentioned, I enjoy being outdoors. So much so that it influences what jobs I take. Currently, I’m a delivery driver for UPS. I get to be in the elements all day, every day.

Representation matters. It does. But I’m not just speaking about people of color. I’m talking about people of color from urban areas who don’t want to be that lone hunter in the woods. I’m talking about the guy from the projects whose boys drill into his head that black people don’t hunt. I’m talking about the parent holding down a full-time job, who has no clue that there’s a wildlife preserve less than an hour from the city. There is a growing demographic of urban hunters that the hunting industry NEEDS to acknowledge. Stop hitting me with a barrage of images of hunters on their farms or other rural areas. Start including photos of bowhunters schlepping their bow cases on the train to their local bow shop. Better yet, show me a hunter riding a bus with their climbing stand on their back. (For the record, I’ve done both.)

I’ve been hunting for a little over a year now, and I’ve got one kill under my belt. My friends have been cool about it. But COVID hasn’t really afforded me the opportunity to catch up with them, to share my experiences, and get their feedback. My family does not share my interest, and that’s probably been my biggest challenge. My wife isn’t against hunting. She just doesn’t see a need for it. At least not for our family, and not for where we live. My kids just aren’t interested.

Not too long ago, I would have agreed with my wife—hunting wasn’t really necessary for me. But my time in the woods has led me to believe otherwise. The longer I hunt, I think more and more about the stories my dad used to share about the farm where he grew up in Haiti. I’m remembering pictures of him as a Boy Scout, and of him camping. Maybe my desire to hunt is a direct correlation to my family history, and I just didn’t know it. I haven’t spoken to my parents in years. This could be the opportunity for me to stop being stubborn, and just reach out. Because hunting with my dad would be something.