The giant, 100-year-old fish outweighed the young man who speared it 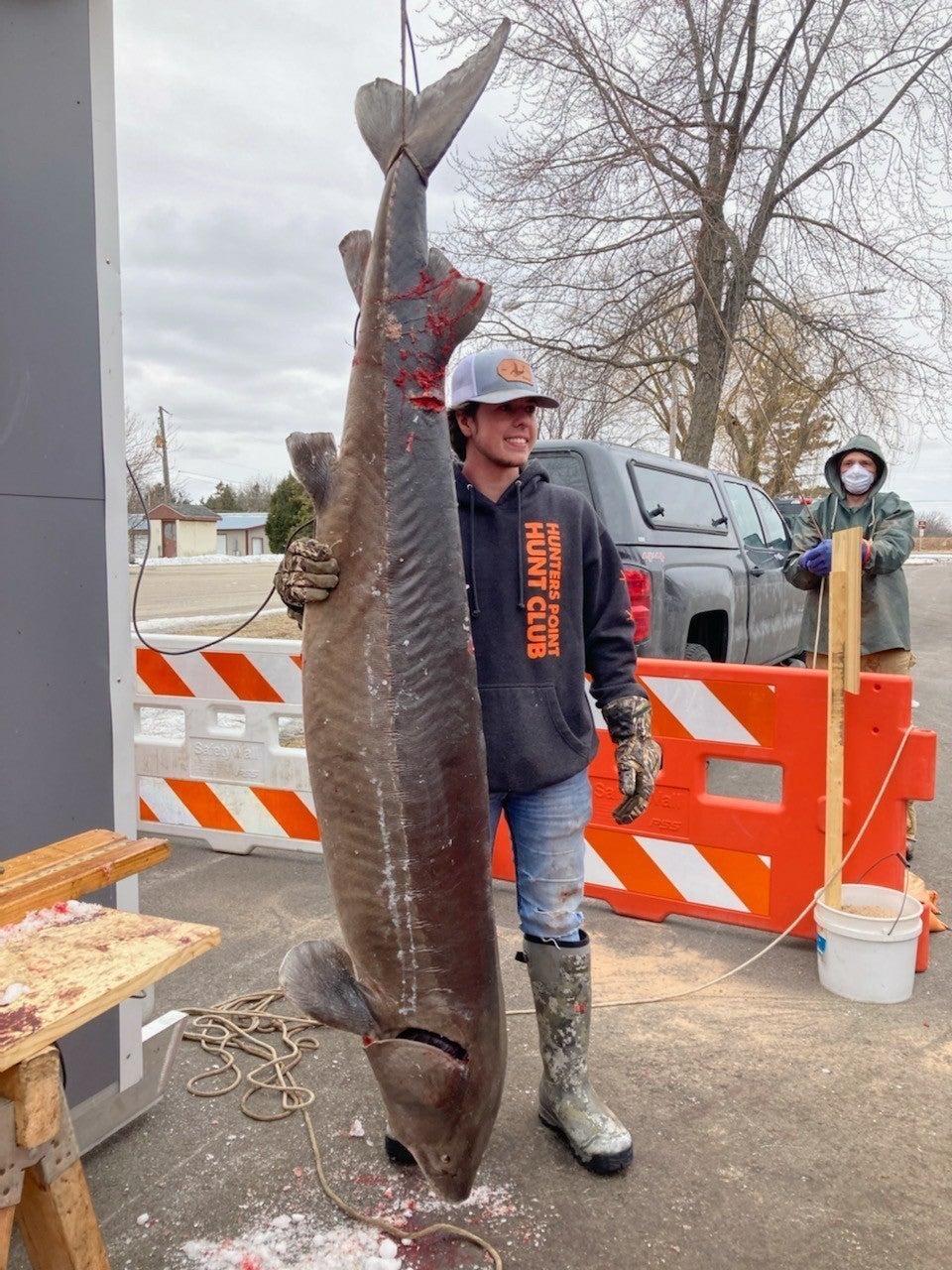 Spearing lake sturgeon on ice-covered Lake Winnebago in Wisconsin has a long and rich tradition. Jared Guelig, 22, of Fond du Lac has been spearing since he was 12 and his family has speared on Winnebago for 25 years.

Guelig has taken several sturgeon over the years—including a 69-pounder—but the one he recently tagged on Feb. 17 is a true giant. It’s the biggest sturgeon speared on Winnebago in nearly a decade, says Guelig.

Guelig and his girlfriend Emma Haak were fishing from his ice shanty, sitting beside a 3-foot by 6-foot hole that was cut in the ice with a chainsaw. They were patiently watching a monitor linked to an underwater Aqua-Vu camera. He had a special eight-prong spear with a detachable head set up with a haul-in line, ready to toss when he spotted a sturgeon.

“Even though the water under the 20-inch ice is only 14 feet deep, you can’t see bottom,” says Guelig. “So I’m essentially throwing a spear blind into the water trying to hit a moving sturgeon target.”

But years of experience have taught Guelig how to use the camera to his advantage.

“I place my camera near bottom on one side of the ice hole, and a white cup on the bottom in the middle of the hole,” Guelig explains. “Then I hang a weighted wooden fish decoy on the opposite side of the hole, also just off bottom.”

The cup and sturgeon decoy are attached to cords at the surface. The camera has lines to it from the lighted monitor in the shanty. The cup acts as a fish decoy, but it also gives Guelig a reference spot for where a fish is in the water column through his view in the Aqua-Vu camera. That’s just what happened on Feb. 17.

“I saw him coming on the camera monitor and when he was right over the white cup in the middle of the hole I threw my spear,” says Guelig.

The stainless steel ultra-sharp spear hit the fish near its tail, the detachable head with foot-long spines driving deep, then pulling free from the spear handle. The battle was instantly on, and Guelig and Haak were in a tug of water with an ancient fish.

They were about a mile offshore, in a popular spot with about 100 other shanties were nearby. Guelig called over friend Austin Dreifuerst, who was in a nearby shanty. Dreifuerst immediately joined in the sturgeon battle, and soon the trio muscled the fish to the surface, hauled it onto the ice, and wiggled it outside to keep it from destroying their shanty.

News of Guelig’s giant fish spread fast through the ice shanty village, and in short order many fishermen showed up to admire the massive sturgeon. They hauled the fish back to shore, and checked it in at the Black Wolf DNR station, where Wisconsin fisheries personnel measured and weighed it. Guelig’s sturgeon officially weighed 174.3-pounds, which is 25 pounds more than Guelig weighs. It measured 82.4-inches long, and DNR personnel said it could be 100 years old.

The fish had a tag in it, and DNR is doing research on the tag to learn more about the fish. Lake sturgeon spearing is highly regulated in Wisconsin, with limited numbers collected annually in the Winnebago system. Guelig says the sturgeon was a mature adult female that had an estimated 50 pounds of highly-prized roe, which Guelig will make into caviar. He’ll also have a mount of the fish made to commemorate the catch.

It’s been a banner year for Winnebago sturgeon spearing according to Guelig. On opening day of the spearing season his brother Jordan speared a 120-pound female sturgeon near where Jared got his 174 pounder. Then a friend, Clayton Kreuser, also of Fond du Lac speared an 80-pound sturgeon from the same hole and shanty where Jared got his big fish.

“It’s really exciting,” says Guelig. “I’ve been told that my sturgeon is the eighth largest fish taken on the Winnebago Lake system of Wisconsin since 1941. That’s pretty special.”