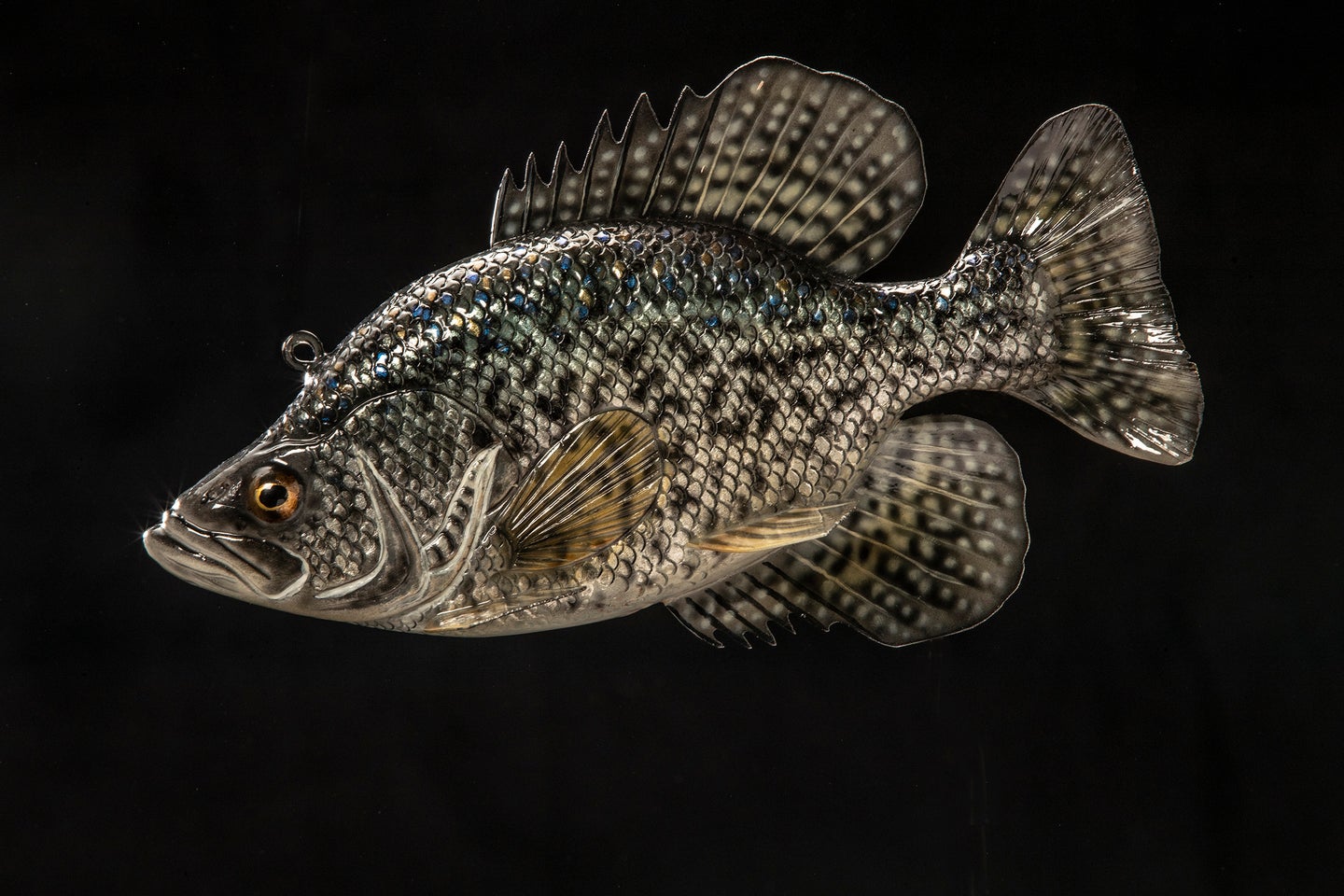 “Hard to tell this thing from a real crappie,” said my friend Dan Scherer, as we passed around the glistening decoy. “Except for we can’t clean and fry it.”

In my hands, the crappie was solid, but its fins flexed with just the right amount of pressure. It was a handsome fish by any angler’s estimation.

Over coffees, we were inspecting one of the creations of decoy carver Todd Schulze from Buffalo, Minnesota. In our hands, the decoys were beautiful, but it’s in the water where Schulze’s creations really come to life.

I later got the chance to see Schulze’s decoys at work on an outing to a local pike lake.  The crappie decoy effortlessly swam a graceful arc, the tight circle of a possibly wounded fish and the clarion call to a predatory northern pike.

In the hands of a darkhouse spearer, fish decoys act like duck or turkey decoys. They replicate a real fish and attract the attention of your quarry, a big, predacious northern pike.

Todd Schulze creates these decoys mostly as a hobby. He brings to life in wood and paint bluegills, crappies, shad, northern pike, largemouth bass, catfish, shiners, walleye, carp and an assortment of saltwater species. Schulze starts with a rough block of either white pine or tupelo wood on a band saw, then files, sands, scrapes, and “takes away all the parts that don’t look like a fish.”

Once its basic shape is determined, Schulze adds details like facial features and scales. Sealing, painting, and subsequent swim tests ensure Schulze’s decoys perform as well as they look. The process for a single hand-carved decoy takes hours.

Schulze started carving more than 12 years ago, about the time his two kids left the family nest. Since then, he’s carved 371 fish so far. He gives away a few to carving and spearing buddies. He sells a few, too.

In his early days of spearing, Schulze used simple, store-bought red-and-white decoys.  “Nothing fancy, but they worked,” he says.

Schulze adds weight to his carved decoys in “just the right place” so they sink slowly, and he sets the decoys’ fins so that the fake makes a sweeping arc in the water with just a gentle tug on its lead, creating a tight circle and a return to its starting point. With luck, a pike will investigate.

“They let you know that you’re doing good work,” he says.

“I’d seen carving done years ago and that prompted me to research it and start putzing around with it,” he added.  A fellow carver, Troy Helget, took the time to mentor him, answering his questions and educating him on the nuances of carving.

READ NEXT: How to Spear the Biggest Pike of Your Life

Schulze carves most decoys out of white pine or basswood, but he uses tupelo wood for competition. Tupelo is a domestic wood that grows underwater, usually found in the swamps in the southern United States. Carvers liken it to carving butter.

After years of spearing with some success, Schulze that timing and location matter most.

“You gotta be in the right place at the right time,” he says. “I like to get my ice hole dug in less than ten feet of water near a weed line, and run my decoy about half way up the water column, or higher.”

The most memorable outings might not involve a pike.

“I had a couple visitors early this winter. Muskrats came up into my spear hole and just looked me over,” Schulze says.  “When I went back there the next day, they had decided that this house of mine was probably better than what they had been making out of cattails. While I was gone they’d set up shop and dragged mud all over inside, and it smelled just awful. So, I decided to let them have that spot, and I moved my darkhouse to the other side of the lake.”

“Spearfishing is a lot like deer hunting,” Schulze says. “You sit there for sometimes hours and even days, and finally, that big buck or that big pike slides into view, your heart starts to race, and it’s game on!”