When you dub yourself the Sturgeon Center of the World, you really mean it. 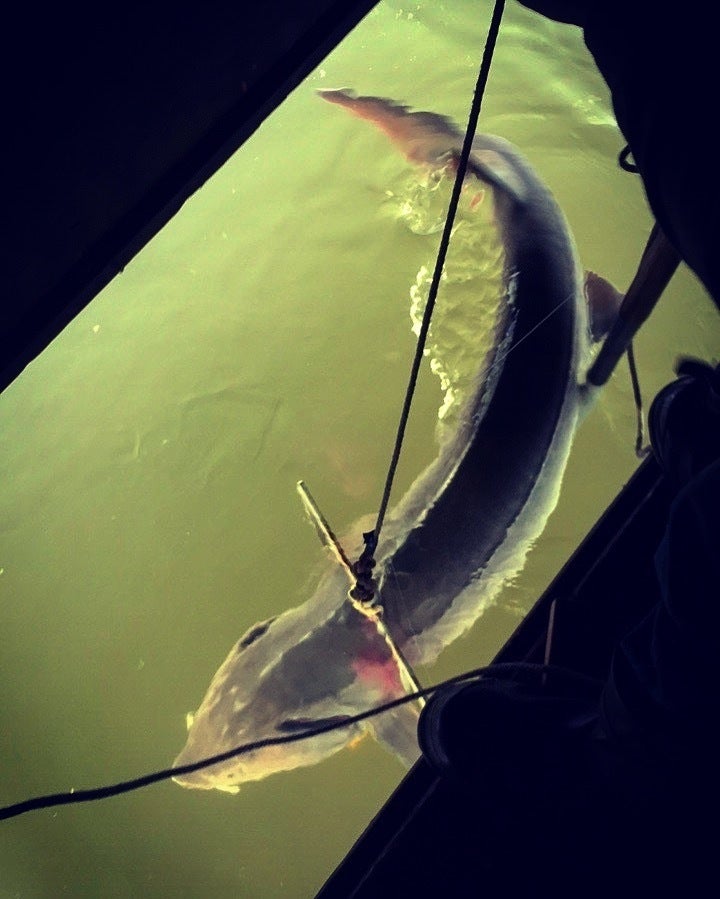 The view from the dark shanty. David Propson
SHARE

What would possess a person to spend days, years or even decades waiting for a chance to propel a spear into a beast of a fish? If you asked some of the nearly 13,000 people on the icy surface of Wisconsin’s Lake Winnebago system on opening day of the 2017 lake sturgeon spearing season, you’d get a wide variety of answers. In the end, though, it revolves around the opportunity to tag one of the largest fish in North America.

Essential tools of the trade for sturgeon spearing on the Lake Winnebago system include strong, multi-pronged and barbed spears, strong rope, decoys and a gaff.

Proving that you don’t need a fancy decoy to attract a sturgeon, Chuck Wagner of Algoma lured a sturgeon close enough to spear with a homemade painted piece of PVC pipe.

Ice conditions were excellent opening day. Warm weather, however, made things a bit less solid by the season’s second weekend.

Gerald Peterson’s 154.9-pound, 83.4-inch female sturgeon speared on the third day of the 2017 season was about five inchers longer but only two-tenths of a pound heavier than Schumacher’s opening day trophy. Track the rest of the season online here.

David Propson of Kiel, a student at UW-Green Bay, got this awesome photo of a 61-inch, 51-pound lake sturgeon speared on Lake Winnebago by his father, Peter Propson of Kiel.

Andy Schumacher of Oshkosh, Sandy’s son (right), was staring into the depths in another shack when he got a cell phone call to help his mother with a big fish.

Schumacher’s 78.5-inch beast had a huge girth and weighed 154.7 pounds. The Schumacher family has a long history on the lake, and was profiled in the Emmy-award-winning “Frozen Chosen,” a sturgeon-spearing documentary currently available on Netflix.

Wherever there’s a crowd, there’s someone trying to figure out an angle on how to make a buck. One entrepreneur sold unique signs at the Stockbridge registration station outside Harbor Bar.

The small Village of Stockbridge, Wisconsin has trademarked the name Sturgeon Center of the World and it certainly seemed like it on Februaru 11, opening day of Wisconsin’s 2017 Lake Winnebago system sturgeon spearing season.

Village Clerk/Treasurer Lisa Averkamp said there’s nothing like the camaraderie of sturgeon spearing.

“I think it supersedes deer hunting,” Averkamp said. “It brings families and friends together. I’ve been going all my life, and I’ve got eight brothers and sisters who spear. My birthday is Feb. 11, and if I wanted a birthday party growing up, it was a birthday party on the lake.”