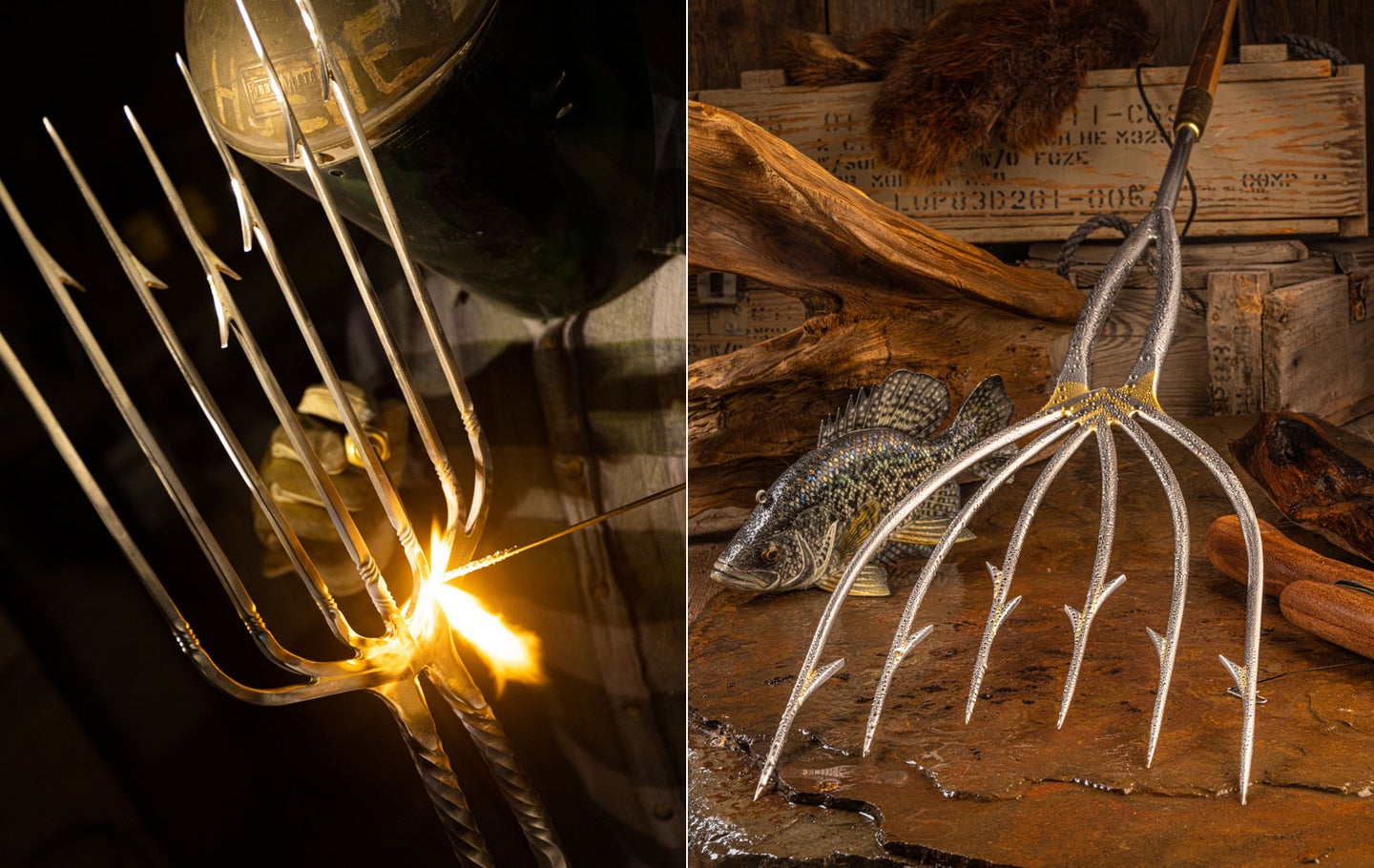 The distance between a Minnesota spear fisherman and a singer from the Metropolitan Opera in New York City can’t be measured by time zones, but rather by the singular devotion to craft.

That’s as good a way as any to describe Minnesota spear-forgers Loren Hjelle and his son Scott. The pair call themselves welders, but that doesn’t fully describe their fine artisan talents. But first, Met contra-alto…

“A fellow came in here one day from over by Sunberg, a recently retired opera singer,” Loren says, leaning into his chair, surrounded by the soot-covered tools of the metal trade. “This guy had his father’s old spear in his hand, and he wanted to see if I could make one just like it. He was going spearing for pike, and didn’t want to take a chance on losing that heirloom piece.” It was destined to be a forever wall-hanger.

“That old spear was built using tines from an old pitchfork,” Loren Hjelle says. Hjelle (pronounced JELLY, like in peanut butter and…) took on the task.

After building that spear, pitchfork tines became Hjelle’s new medium. He started seeking out old pitchforks, and his signature spears started showing up in spearing shacks all through the northern-tier of North America. They’re used for spearing northern pike, a pursuit that seems to be growing more popular each winter. Soon, stacks of pitchforks and old silage forks littered a back room, waiting for their new lives on the ice to begin.

“Pitchfork tines,” Loren says, “are not round, they’re elliptically shaped — like an egg. They’re more oblong. We cut the tines off and rotate them, so they’re strong and long, and some we make with multiple barbs.”

Loren remembered a conversation with a fellow spearer, who marveled at his creation. “How come your tines are so long?” he asked. “How come you want your tines to only go part way through a fish?” came Loren’s answer. End of discussion.

The elder Hjelle graduated from welding school in 1971, and was asked by an older friend if he’d ever made a spear. He made that first one from some material found on century-old railroad parts, back when rail gangs gas-welded the rails. After that first effort, a few more friends came around asking for or bartering for spears. Hjelle was hooked.

He took his early spears to a few decoy shows and only sold a couple of them. Looking over at his and Scotts’ modern creations, he laughs, “They didn’t look anything like this. Many of those [early spears] were made from garage-door springs we had to straighten and weld. Some of those guys would give our spears names like ‘Widow Maker,’ ‘Death Wish,’ stuff like that.”

But that’s no longer the case, Hjelle modern spears are pure functional art.

Scott, 34, made a few spears as a young lad for 4-H projects and for an advanced metal class. Early in his career he was tasked with straightening out those garage door springs for his dad. Now he’s an integral partner in the spear making art — a spear-making artist in residence.

Scott put pictures of his first efforts on a Facebook page called “Fear the Spear” and that’s when their business blew up.

“I joined because I grew up spearing, and I wanted to see what else I could learn from like-minded sportsmen,” he says. He put photos of his dad’s best spears on the site, which garnered even more interest. He then made his own Facebook page, and now the Hjelles have as many orders as they can fill, with more than 3,000 followers watching their endeavors online.

“The number one custom option is twisted square tines from silage forks,” Scott says. “Those square tines are ideal for strength and flexibility. They maintain rigidness all the way around, but that’s not why I think people want them. People like our twisted tines, which need to start with a square stock. And our spears are truly balanced because, like a throwing dart, they’re end-heavy.”

READ NEXT: This Wood Carver Is Making the Most Realistic (and Deadly) Fish Decoys You’ve Ever Seen

The wishbone look, where the main shaft of the spear splits then comes back together near the business end of things, is unique to a Hjelle spear. No other maker has that feature.

“I love metal art,” Loren says. “I teach welding at a local college and my students are making a full-size German shepherd metal dog in class for the police department in Willmar. It will be displayed in their lobby as a permanent fixture. That’s part of thing we like to teach at school — creativity. When welding gets combined with art… well, boy. I’m there, I just love this stuff.”

When Scott came back to the business his father started, it changed his life.

“This spear making blew my mind. I get to use my hands and be creative,” Scott says. “When I was in school, I couldn’t paint or draw. Art did not register with me. These spears opened up a part of my brain that never surfaced before. Now, I learn all these new things. We have a new laser engraver, and right now we can put almost anything you want written or drawn on your spear. It’s gonna open up a lot of customization we never thought of before.”

Rocking back in his chair, Loren says, “The coolest thing about this spear making is that without intention, Scott can have this business for the rest of his career and — like decoy making — it can be lucrative if you work at it. It’s turned into something I can leave my family.”

But no good spear story can end without a fish tale, and Loren has plenty.

“So, I was way up on a northern Minnesota lake, and this 24-odd pound fish – which looked big as a railroad tie — floated in beneath me, paralleling my decoy. I thought, ‘Please turn, please turn!’ And like a battleship that old fish took forever to get turned. He slides back in. I had my spear in my hand, and he was coming right in beneath me. I’ve never had buck fever, but right then I sure got a bad case of big fish fever. I threw that spear so hard — I missed him. Gone!  I just couldn’t believe it. I guess I’m a better spear builder than I am a spearer!”