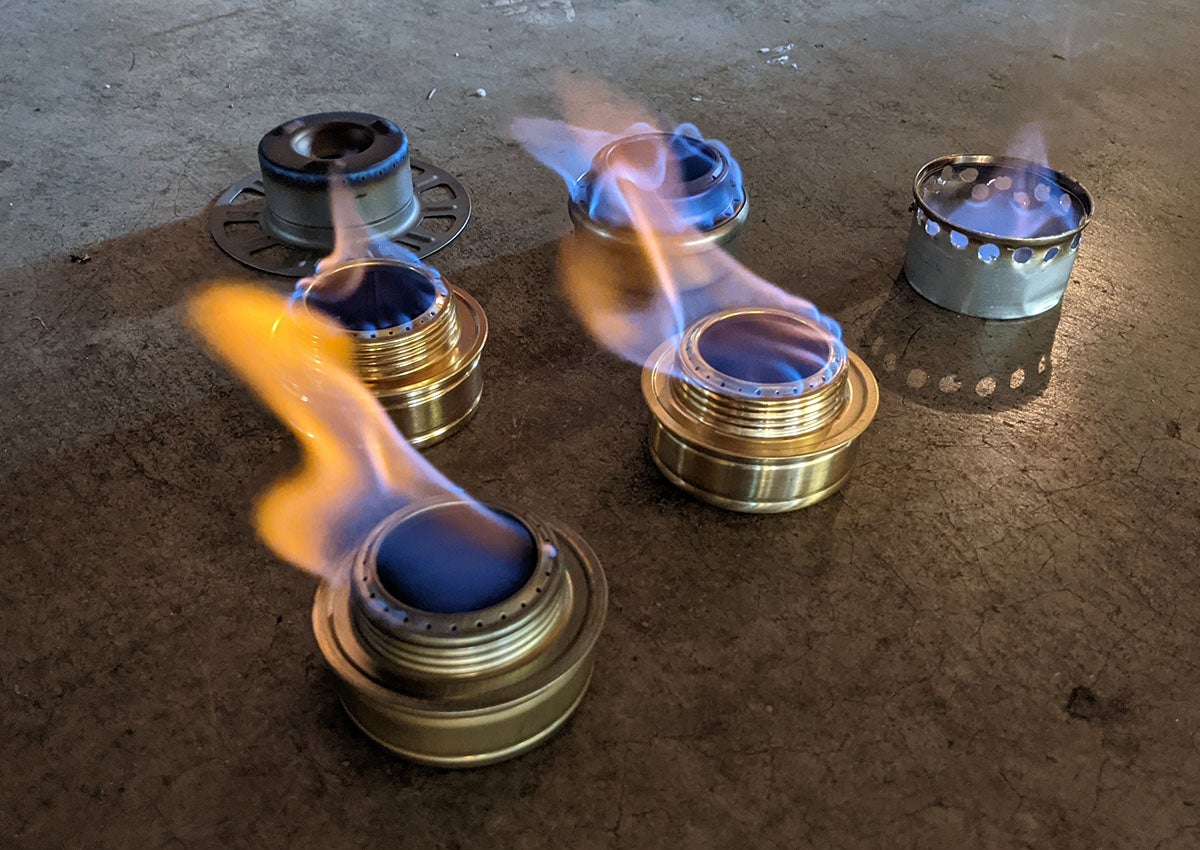 The Best Alcohol Stoves of 2022

These stoves are light, reliable, and inexpensive

While alcohol stoves have fallen out of popularity, there are several reasons why you still might want to consider one for your kit. Not only are these stoves often lighter than a more traditional isobutane-compatible stove, but it’s also significantly easier to find compatible fuel, especially in mountain towns that don’t cater to the outdoor set. To help you choose the best alcohol stove to base your setup on, I tested some of the most popular models available:

Here are the stoves that made the final cut:

How I Tested Alcohol Stoves

Stoves were tested in tandem to gauge how fast (and long) they were able to boil water. I used 50 milliliters of denatured alcohol in each stove for my test, supplemented by an inverted stove stand (to accommodate the wide base of the Vargo Decagon) and a homemade windscreen.

I only used a half-moon design for the windscreen, which allowed me better visibility as to when the water started boiling, as testing was conducted in an area protected from wind on three sides. The vessel for this test was the MSR Pika Teapot—one of the best camping kettles—that I cooled off between tests and then refilled with two cups of water. In addition to this field testing, I also checked the weight of each stove against manufacturer specifications. Additional features on each stove and price were also taken into consideration.

The Evernew was not only the lightest alcohol stove I tested, it also reached a boil faster than any other model.

Ultralight enthusiasts looking to cut grams have long been a fan of the titanium Evernew, which—by a couple of grams—beat out the Vargo Decagon as the lightest stove available for purchase in my test. But the low weight comes at a cost; namely, this stove burns through fuel much faster than the brass models I looked at, potentially offsetting any weight savings that you would otherwise accrue (although that low base weight will still look pretty slick on your gear spreadsheet).

Another plus to this model is that it reaches a boil time extremely quickly—not quite as fast as isobutane-canister powered stoves, but in the ballpark. So if you hate watching your pot boil (understandable, as you can’t leave alcohol stoves unattended in the backcountry), that may be a reason to look past the cons of the Evernew.

The wide base of the Vargo Decagon adds stability (especially helpful in windy conditions) while still coming in at one of the lowest weights in my test.

The first thing you notice about the Vargo Decagon is its base. Whereas other alcohol stoves are only as wide as they need to be, the Decagon is exceptionally stable due to its wide base. You’d think that would make it heavier than the competition, but this stove was only two grams heavier than the Evernew (the lightest in my test). Credit that to the titanium construction, which is significantly lighter than the brass or alloy metals used in some other stoves.

Despite its titanium construction, the Vargo Decagon was significantly less expensive than its main competition for weight, the Evernew. That makes this a smart choice for dirtbags looking to cut down on the weight of their kit.

This classic design has many imitators, thanks to its overall functionality and ability to efficiently (if not speedy) boil water

While the Trangia Spirit Burner shouldn’t be the first choice for ultralight diehards, it’s an iconic staple of many a backcountry kitchen. In fact, its design has inspired a spate of would-be imitators vying for the title of best alcohol stove: I was a little surprised at how obviously the Trangia had inspired the Kewis, Esbit, and Solo Stove versions.

While this stove took longer to come to a boil than others I tested, it held the boil for over eleven minutes—an impressive amount of time that speaks to how much fuel weight you would save on a longer trip. I also liked that this version came with a simmer-ring lid and a screw-top lid, allowing you to snuff out the flame and then store the rest of your unused fuel directly in the stove. The only downside is that it takes significantly longer to reach a boil with this design than with the titanium models I looked at.

This off-brand alcohol stove works just as well as others that cost twice as much—and it comes with a handy stand to prop your pot on.

This one comes by several names, including Redcamp and Tiny Spark, but the basic package is the same: an aluminum-alloy stove in the Trangia style (and the spitting image of both the brass Esbit and Solo Stove stoves), a stand for your pot (handy), and a mesh storage bag (destined for the trash). First the pros: this is an extremely affordable stove that held a boil for a considerable length of time.

The bad is that it took longer to reach a boil than the Trangia, and significantly longer than the titanium models. Its fabrication is also flimsier than other versions I looked at, easily bending under pressure. But if you don’t mind treating your gear gingerly (and there is no reason an alcohol stove should take a particular beating), then this one will work just fine in most settings.

This homemade version of the classic alcohol stove costs pennies, is virtually weightless, and works as well (if not better) than more expensive models.

All an alcohol stove is a vessel for burning an alcohol-based fuel. Do you really need to spend fifty dollars to get a top-notch titanium version? Does the classic Trangia design really produce better results? To find out, I set out to make a staple of the DIY backpacking world: the cat food can alcohol stove.

The concept here is pretty simple: just clean out a cat food can and then drill or punch holes in it around the rim of the lid. The classic can to use for this is Fancy Feast (due to its comparatively small size and low price), with a single or double layer of holes punched in around the top of the lid (more holes equals greater weight savings but less fuel capacity). During testing, I drilled in a single layer of holes without incident but found the structure of the can became too flimsy after this to continue to drill in the second layer of holes.

One advantage of this design is that you don’t need a pot stand, which helps you to save weight further, as the holes in the side give the fuel enough oxygen to burn on without it. (During testing, I also found that it was considerably more efficient without it.) But the best part? This stove does a great job of boiling water—as good or better than the rest of the alcohol stoves in my test.

Things to Consider Before Buying an Alcohol Stove

Alcohol stoves cannot be used in every wilderness area, especially in the West. Check current restrictions where you plan to travel before making a purchase.

For many, the biggest reason to carry an alcohol stove, as opposed to the more common isobutane-compatible stove, is the weight savings. The lightest-weight alcohol stoves can weigh as little as half of the isobutane-compatible variety, and the fuel for an alcohol stove can be stored in a plastic bottle (disposable plastic water bottles are common) as opposed to a metal canister. Where the weight savings start to decline, however, is on longer trips, as more fuel is required to boil a liter of water with an alcohol stove than with an isobutane stove. Take your alcohol stove with you on a few shorter trips to get a feel for how much fuel you’ll need per day before taking it on a more extended trip into the backcountry.

Another reason to carry an alcohol stove is fuel availability. Whereas not all towns located in the mountains (a very distinct entity from a classic “mountain town”) are equipped with isobutane canisters, you can almost always find something that will burn in your alcohol stove: denatured alcohol from the hardware store, isopropyl from the drug store, or HEET (yellow bottle) from the gas station.

Denatured alcohol looks a lot like water, and more than one backpacker has made the mistake of drinking from the wrong bottle in the middle of the night. If you choose to store your fuel in a plastic water bottle, be sure to mark it in a way that is instantly recognizable by both touch and feel to prevent such an error deep in the backcountry.

Choosing an alcohol stove is just the first part of creating an alcohol stove system. You’ll also need to figure out what fuel to use, what you want to use for a windscreen, whether you’ll need to raise the stove off the ground (useful for improving efficiency in cold conditions) or provide additional stability to your setup to ensure it doesn’t tip over, and, of course, choosing the best camping cookware to boil your water in.

Q: How much do alcohol stoves cost?

Alcohol stoves can cost anywhere from practically free (if you make your own) up to $50 for a fancy titanium version.

Q: Are alcohol stoves any good?

Alcohol stoves can be a good choice if you are patient, willing to experiment to maximize your fuel use, and are camping in a place with a low risk of fire. If any of the above is not the case, it would be better to go with a traditional canister stove, like the Soto Amicus or MSR Pocket Rocket.

Q: Where are alcohol stoves banned?

Alcohol stoves are banned (or are effectively banned, due to ongoing fire danger) in several places, including Rocky Mountain National Park and the State of California. While there may be certain times when these stoves are permitted, if you plan to do a lot of backpacking in these areas, investing in one of the best backpacking stoves would be better. When in doubt, a call to your local land manager can help clarify current restrictions in place.

Q: How much fuel do I need for an alcohol stove?

While the best alcohol stoves continue to be a popular choice among ultralight enthusiasts, thruhikers, and minimalists due to the simplicity of their design and the ease with which you can obtain fuel, other adventurers should weigh the pros and cons before choosing to go this route. Remember that in addition to choosing an alcohol stove, you will also need to procure a windscreen and a pot stand and figure out what type of fuel to use in your stove.