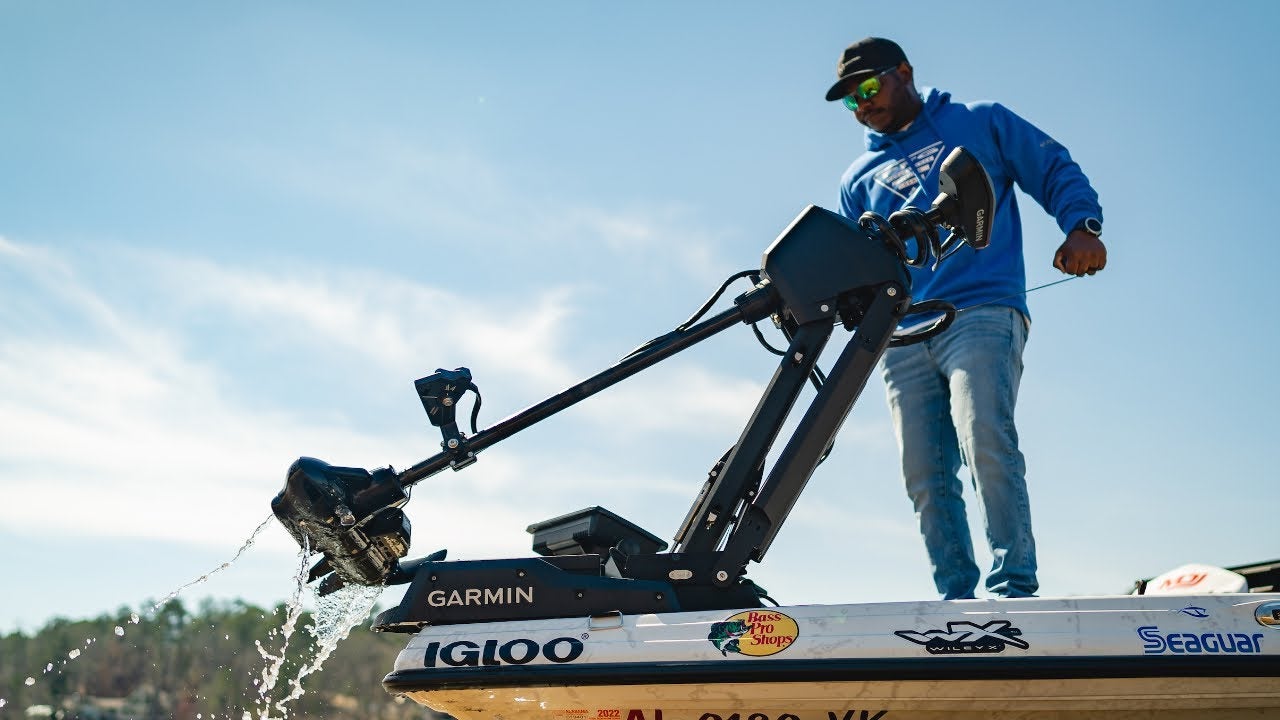 The Best Trolling Motors for Freshwater

Pro anglers give insight into the best trolling motors for freshwater

When I bought my first used bass boat in the fall of 1996, it came with a bow-mounted, foot-controlled trolling motor with a whopping 43 pounds of thrust. It was a “12/24” model, able to switch from running on one deep cycle battery to going into a supercharged mode that drew upon two batteries equally. That marvel of engineering got bogged down in even modest grass beds, and I learned to carry and replace the steering cable, which had the habit of binding up and breaking when it hit cover, and once just from flopping while driving down the road.

Little did I know that 25 years later my new trolling motor would have more than 100 pounds of thrust at my disposal, drawing from three marine batteries. I’d link it to my electronics, including GPS, and it could autopilot me from one spot to another, or hold me steady on a predetermined waypoint. Furthermore, I’d be able to outfit it with various accessories—including levers, cable jackets, specialized prop nuts and aftermarket props—to enhance its performance. Finally, and perhaps most importantly, today’s trolling motors are more durable that those of a generation ago. It used to be that if you hit a stump, or even just got bogged down in grass, steering cables and shafts and other internal parts would break. With today’s beefed-up build quality and breakaway mounts, you can just keep on trucking.

We’re living in a golden age of electric trolling motor efficiency, and that’s bolstered by the fact that we have four main players in the field. By the late 1990s, we were effectively down to two, MotorGuide and Minn Kota, but with the addition of Lowrance’s proprietary products as well as those of mainstream electronics manufacturer Garmin, we now have an arms race of epic proportions to keep your boat under silent trolling motor power. There are rumors of a fifth competitor entering the fray either this year or next. For now, here’s what the big four sell at the top of their lineups.

Minn Kota’s Ultrex completely raised the bar in what was then a two-horse race when the company introduced the Ultrex in 2017. Anglers had utilized GPS functionality extensively for well over a decade before, but never before in seamless concert with their electric trolling motor. While the motor was made to “go,” perhaps the greatest innovation was the ability to stop and stay – with Spot-Lock, the motor could keep a boat fixed on a GPS coordinate, even in the teeth of strong winds or heavy currents. Today’s Ultrex models build upon that strong start, and come in multiple models—both 24 and 36-volt versions, requiring two and three batteries, respectively, and 45 and 52-inch shafts to account for different boats and fishing styles.

The I-Pilot feature, which can be controlled from a remote control or a telephone app, is a huge part of pro angler Keith Combs’ success. He prefers to fish offshore, and noted that he can retie or take care of other business and let the motor pull him to a preset waypoint unattended. When operated manually, the steering is remarkably smooth and can be locked so it stays in the predetermined position if you take your foot off of it. Combs said that when fishing a grass line, he’ll often use the “jog” feature, which moves him in 5-foot increments, allowing him to cover an area precisely and thoroughly.

In the past, interference from jostled or improperly mounted transducers sometimes led to imperfect or malfunctioning electronics, essentially making them heavy paperweights, but with integrated transducers with down-imaging and/or side-imaging technology the Ultrex provides maximum clarity. Humminbird is the only brand that offers 360-degree sonar technology as well as Mega Live forward-facing sonar, and Combs said he uses them in tandem, with the Ultrex as his base of operations. Select models have built-in Mega Down Imaging.

This remote control trolling motor comes in 45-, 52- and 60-inch lengths, and both 24- and 32-volt systems which provide a maximum of 80 and 112 pounds of thrust, respectively. They come with a limited lifetime warranty on the shaft and a limited 3-year warranty on everything else. Minn Kota also makes a great trolling motor for kayaks.

Lowrance, a longtime leader in marine electronics, ever since founder Darrell Lowrance introduced the “Fish-Lo-K-Tor” commonly referred to as the “little green box,” jumped into the trolling motor game with the Ghost freshwater trolling motor. Since it was their first trolling motor, they claimed that it allowed them to build it from the ground up, learning from the mistakes or omissions their predecessors.

Clark Reehm, who fishes the Tackle Warehouse Pro Circuit and guides on Lake Sam Rayburn in Texas, said that the most important thing about his Ghost is the brushless motor, which allows it to be more energy-efficient. “I can make my batteries last much longer in the day,” he said. “That enables me to look for bedding fish for several more hours or to fight current and big waves without worrying that I’ll run out of power.”

He also likes the fact that the motor does not interfere with his four Lowrance HDS12 sonar units, and moreover pairs easily with them to maximize the use of his DownScan Imaging and Active Imaging technologies, with a minimal learning curve. It’s how he makes his living, but he said that’s critical for the weekend warrior who wants to get out on the water and start finding and catching fish immediately. Finally, he said it’s durable, and the composite shaft has a lifetime warranty if for some reason the 360-degree breakaway mount doesn’t protect it.

Whether you’re left-footed or right-footed, the pedal can be configured so that you’re most comfortable, and the motor’s functions can be set up in various permutations, to put the ones you like and use most where they’re most accessible.

The Ghost comes in 47-, 52-, and 60-inch shaft lengths and both 24- and 36-volt systems that provide up to 97- and 120-pounds of thrust. Lowrance offers a limited lifetime warranty on the composite shaft and a limited three year warranty on the rest of the motor.

Just as Minn Kota/Humminbird were the first to bring the spot lock trolling motor feature to wide use, Garmin was the first brand to popularize forward-facing sonar, in the form of their Garmin Panoptix LiveScope system, and they paired it their proprietary Force trolling motor to get the most out of the technology.

Missouri bass pro Chad Morgenthaler said that “because of the brushless trolling motor, I get zero interference whether I’m looking forward or down.”

He also believes that the supposed 100 pounds of thrust is a vast underrating. “I can’t prove it, but it’s way more powerful than anything else I’ve ever used. Even with my 21 foot Phoenix boat loaded heavy, with the trolling motor wide open I’ve run it as fast as 4.1 miles per hour.”

Garmin has distinguished themselves with wireless technology. Not only does the trolling motor connect wirelessly to your chart plotter and offer built-in sonar capabilities, but the foot pedal can be operated wirelessly (using AA batteries). It can also be hard wired if an angler does not trust that set-up. The Force comes with a floating, water-resistant remote control that can be customized to offer a wide variety of features.

The Force is available in both 50- and 57-inch shaft lengths. It comes with a 3-year warranty and a limited lifetime warranty on the shaft.

MotorGuide, along with MinnKota, is one of the two “legacy” trolling motor companies, and their Beast and Tour Editions rule the roost in certain quarters for decades. Today, they’re the only one of the four major brands that is not directly tied to a specific brand of electronics. Indeed, their claim to fame may be that they work equally well with whichever electronics and angler chooses, or with a mix and match assortment.

Like the others, MotorGuide Tour Pro offers features like Anchor, Jog, Heading Lock and Cruise Control, but they claim that their GPS trolling motor navigation is three times more precise than the competition. For years, MotorGuide’s metal foot pedal was the standard for durability and precision, and they’ve continued that tradition with a metal pedal that does not flex. That’s complemented by a 360 degree breakaway system and an oversized outer shaft that protects the composite inner shaft.

In the past, many trolling motors were difficult to retract and deploy, often leading to bad backs and broken lift ropes, but MotorGuide claims that their Zero-G Lift Assist System makes the process easier than the competition. The two-blade Katana prop is great at chopping up thick vegetation.

The MotorGuide Tour Pro comes with a 45-inch shaft in both 24- and 36-volt systems, which up to 82 and 109 pounds of thrust, respectively. It is compatible with other major sonar brands, so you can choose the one that suits you best. The shaft has a lifetime warranty.

Q: What is the strongest trolling motor?

According to pro bass angler Chad Morgenthaler, the Garmin Force is the most powerful trolling motor. He believes that the supposed 100 pounds of thrust is a vast underrating. “I can’t prove it, but it’s way more powerful than anything else I’ve ever used. Even with my 21 foot Phoenix boat loaded heavy, with the trolling motor wide open I’ve run it as fast as 4.1 miles per hour,” he said.

Q: What size trolling motor do I need?

Q: How fast will a 55 lbs thrust trolling motor go?

Trolling motor speed depends on your boat design and weight. Top peed for a trolling motor can be 2 to 4 mph.

Ultimately, choosing a trolling motor is a very personal decision based on a number of factors, the two most important being the size of your boat and the size of your budget. By choosing a more powerful motor, you may also be choosing to add another battery, so factor that into the equation. Beyond those initial considerations, there may be value in buying the brand that matches your marine electronics, to ensure compatibility and to minimize interference. Just remember, while their overall reliability has increased substantially in recent years, when you add more features, you add more complications, so don’t bite off more than you can chew.