With brand new cartridge introductions from two major brands, this year’s crop of rifle ammo is as innovative as it gets 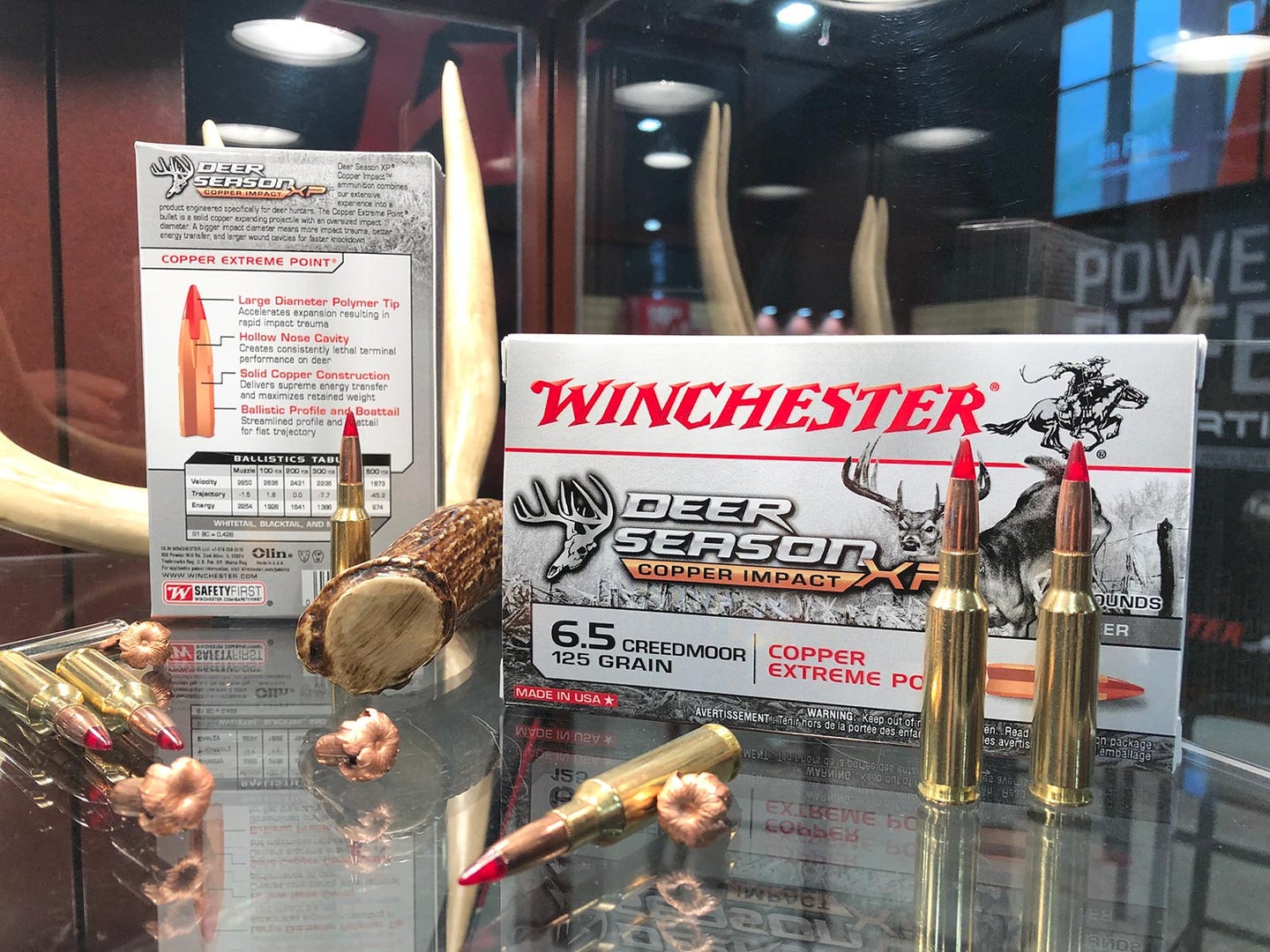 Like other Deer Season ammo from Winchester, the Copper Impact has a large polymer tip for fast expansion. Winchester Ammunition
SHARE

Say what you want about the hunting world of late, but you can’t say that things aren’t interesting—especially when it comes to hunting ammunition. Over the last 15 years, designers and engineers have rendered the hunter more capable and lethal than ever before. And those same innovative people continue to work hard to keep that trend going. Here’s what’s new and awesome in terms of ammunition, as discovered at the 2020 SHOT Show.

In a radical departure from traditional cartridge design, Sig Sauer has put together a new and extremely hot cartridge. It’s an intriguing story, but the short of it is that the Fury was developed for military use. The parent cartridge was a .308 and the case itself is made of three-pieces rather than the common one-piece of brass we’re all used to. The forward section of the cartridge is made of brass, while the rear, and case head, are made of stainless steel. A third piece mechanically links the two together.

This construction allows pressures in the case to exceed those of standard and even magnum cartridges by as much as 20 percent. To stand up to the increased pressure Sig announced a new rifle, the Cross, that’s chambered in the .277 Fury. They believe this design may be the way of the future in the ammo world, and when you see the performance of this little cartridge you might agree. It’ll spit a 140-grain projectile downrange in excess of 3,000 FPS from a 16-inch barrel. That’s a lot of medicine in a compact package. Further specs are elusive at the time of this writing, but keep your eye out; they’re sure to be available soon. www.sigsauer.com

Federal’s new Terminal Ascent is a reengineered and upgraded version of Federal’s already awesome Edge TLR ammunition. The rearward portion of the bullet is solid copper and built to penetrate deeply through bone and tissue. The forward section features a jacketed and bonded lead core, to provide devastating expansion, and a “Slipstream” tip for superior aerodynamics. The Edge TLR projectiles had one groove around the bullets shank. Many (but not all) of the Terminal Ascent line bullets sport two grooves, which has increased the accuracy of those bullets significantly, according to engineers at Federal. Currently, the ammunition is available in a variety of loadings and diameters including 6.5mm, 7mm (.284), and .30 caliber. Price will run around $58 per box of 20; federalpremium.com

The .450 Bushmaster is a favorite across states that only allow slug guns or straight-wall cartridges for deer hunting. Barnes has just added the cartridge to their lineup, loaded with a 250-grain TTSX that was designed and optimized for the Bushmaster cartridge. Projected velocities aren’t given on available literature, but it does state that the “load lines up well to utilize factory rifle scopes designed around 450 Bushmaster 250gr ballistics.” Considering the quality of Barnes projectiles, this combination should prove accurate, hard-hitting, and deadly. $40 per box of 20; barnesbullets.com

If you like big, hard-hitting cartridges, this is the one for you. The .338 Winchester Magnum is an awesome load that has proven itself in the elk, bear, and moose woods since 1958. Combine that with a corrosion-resistant nickel case sealed fore and aft against moisture and topped with a monolithic 225-grain GMX bullet, and you’re prepared to hunt anything on the North American continent. This new load in Hornady’s Outfitter line starts downrange at 2800 FPS out of a 26-inch barrel, with a muzzle energy close to 4,000 ft-lbs. And if you hunt in a non-lead-projectile area, this load is compatible with local regulations. $52 per box of 20; hornady.com

A relative newcomer to the long-range hunting field, Norma’s Bondstrike ammo, by all accounts, is proving to be accurate and effective—which is what you’d expect from Norma. They’ve added a 6.5 Creedmoor to the line, loaded with a polymer-tipped 143-grain projectile going 2740 feet per second. G1 BC sits right at 0.629, with G7 at 0.313. This load should be great for anything up to and including—with careful shot placement—elk. SRP should come in around $38 per box. norma-ammunition.com

Known for building super-accurate bullets, Sierra has recently begun manufacturing loaded ammunition, and they are offering a brand-new line of varmint/predator hunting loads this year. Loaded with Sierra’s own BlitzKing bullets, the line includes five options: a 36-grain .204 Ruger smoking downrange at 3840 fps, a 55-grain .223 Rem going 3215, a 69-grain .223 Rem traveling at 2950 fps, a 69-grain .224 Valkyrie at 3125, and a 70-grain .243 Win traveling at 3450. I don’t know about you, but I can’t wait to give this new ammo a try. sierrabullets.com

One of, if not the, most exciting offerings of 2020, is a new cartridge developed by Nosler, the 27 Nosler. And if you’re a .270 lover, this is your new baby. The long-range shooting craze has left the .270 Winchester behind as standard slow-twist barrels found in older rifles don’t stabilize the long, high-BC projectiles of today. But don’t despair. The .277 diameter 27 Nosler is optimized for a 1:8.5-inch twist rate that will stabilize long-range projectiles, and send them downrange about 400 fps faster than your grandpa’s .270. It’s based on the .404 Jeffrey case, which is the same as that of the 30 Nosler, and it will be loaded in two iterations: a 150-grain Accubond, and Nosler’s new .277 165-grain ABLR. $69; nosler.com

The new 350 Legend cartridge debuted in early 2019, and it was designed specifically for states where only shotgun or straight-wall cartridges are permitted for hunting. The little cartridge has made big waves due to its mild-mannered recoil and snorty attitude. This year Winchester has announced two additional loads. The first sends a 160-grain PowerMax Bonded downrange at 2225 fps, and it hits with authority, as a deer I dropped with prototype ammo last November can (well, actually can’t) attest. The second is Winchester’s Super Suppressed. It’s loaded with a 265-grain Open Tip Range projectile traveling at less than the speed of sound, and it is optimized for use with suppressors. MSRP will likely cost less than $20 per box. winchester.com

The 28 Nosler is known for superb performance, and in 2020, Browning is adding it to their line of monolithic BXS ammunition. This 139-grain projectile isn’t optimized for extreme range, but it is perfect for California and other areas where lead-core bullets are prohibited or frowned upon. Exiting the muzzle at a blistering 3350 fps, it should prove to be a flat-shooting, deep-penetrating round at normal hunting ranges. $48; browningammo.com

While on the subject of solid copper bullets, let’s take a look at Winchester’s new Deer Season load. Topped with a 125-grain monolithic bullet that features a large-diameter point to initiate rapid and explosive expansion, this Deer Season bullet will hit very hard yet still hold together and retain weight. Muzzle velocity is yet to be determined. Here again, this load is perfect for lead-restricted states and hunting areas. SRP will likely come in around $27. winchester.com.