Successful food plots start with the right vegetation. Choosing the perfect plant to put in the ground in the spring... 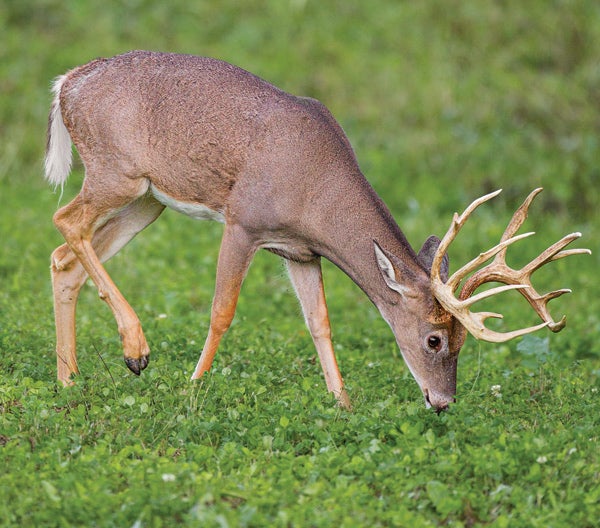 Successful food plots start with the right vegetation. Choosing the perfect plant to put in the ground in the spring and summer can be confusing. But it doesn’t have to be—at least, not if you plant white clover.

“It’s the workhorse of food-plot plants,” says Whitetail Institute vice president Steve Scott. “One planting can last three to five years, and in some regions it provides high-protein forage 12 months of the year.”

Even better, it’s easy to grow and requires virtually no maintenance. In most soil types, a tiller pulled behind a tractor will produce an adequate seedbed. But a small disc pulled by an ATV can work fine too, making clover a good choice for small plots. Clover seeds will sprout and root as soon as they come in contact with soil. There’s no need to cover them, either. Spread five pounds of seed per acre and wait for a good rain to push it into the loose dirt.

Once fertilized, even marginal soil will often produce an adequate stand of clover. Unlike less tolerant plants, such as warm-season grasses and brassicas, white clover can weather harsh conditions. It also produces higher levels of protein—a vital ingredient for antler growth and nursing fawns—than most other t ypes of forage.

A stand of white clover is also a great early-season bow spot, but it doesn’t just attract whitetails in the fall. Hen turkeys eat it in the spring, and they’ll nest around a clover plot, too. Rabbits devour it, quail chase bugs in it, and even bears will eat it.

Avoid Generic Varieties
The best food-plot clovers are the Durana or Ladino varieties, both large-leafed plants that produce high yields and are suitable for any region with adequate moisture. Avoid generic feed-store clover, and be leery of food-plot seed that doesn’t list the variety of white clover included in the bag. It might be Dutch clover, which provides far less nutrition to wildlife than the Durana or Ladino varieties.