Simple rules to follow so your dog stays safe afield 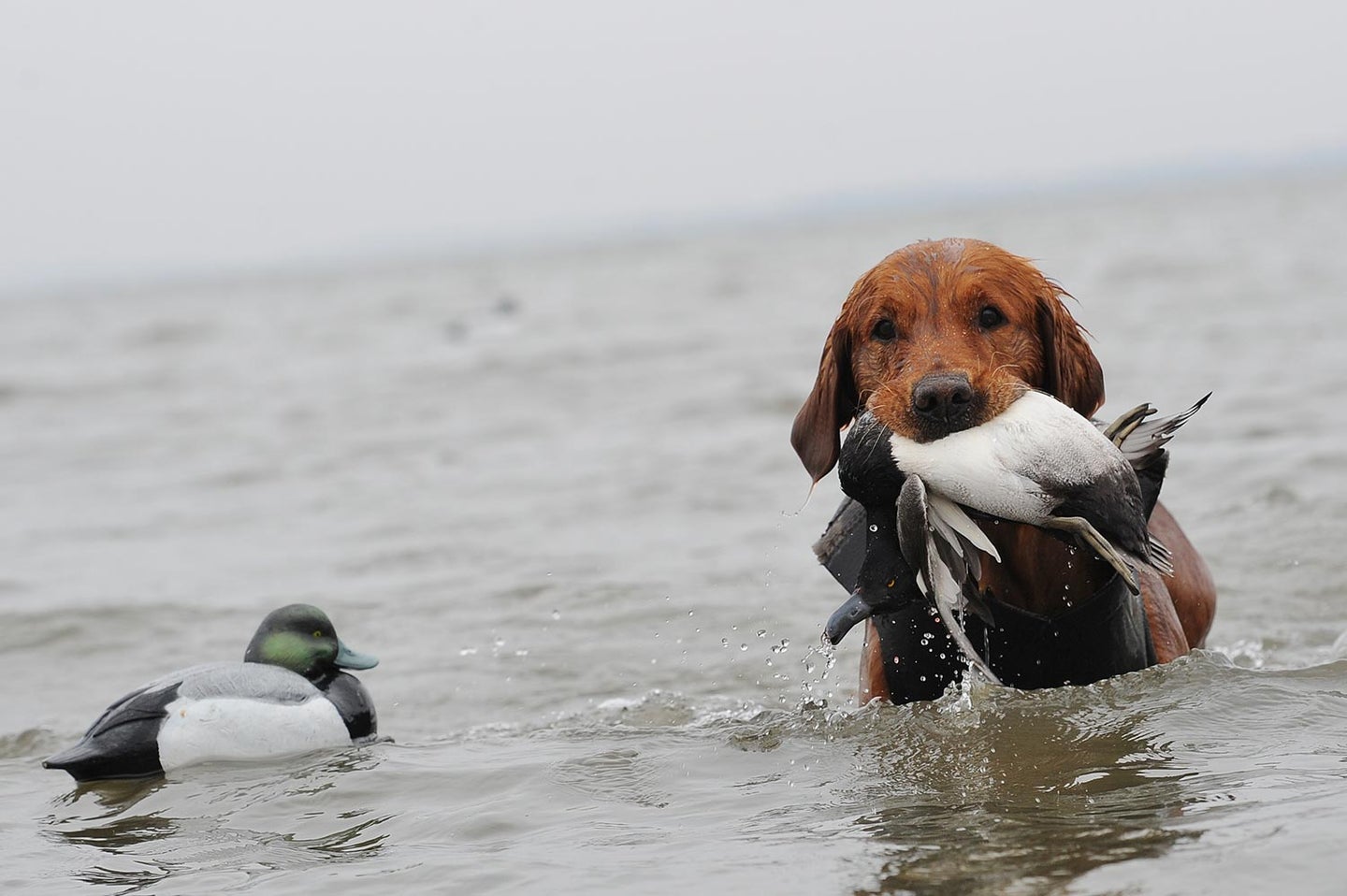 If a retriever doesn’t have drive, you have to consider washing the pup out. Joe Genzel
SHARE

Today’s hunter hits the woods, fields, and marshes with dogs by their sides, eager to locate game and help owners bring it home for the table. But hunting with a dog is not without its risks. The great outdoors is an unforgiving place at times, and being prepared for unforeseen obstacles is the best way to avoid disaster. Here are 10 things to consider before taking your dog afield.

Hypothermia is defined as the rapid loss of body heat, so rapid that heat is lost faster than the body can produce it. In humans this occurs at a body temperature of 95 degrees and below. For dogs it’s below 100. Let that sink in for a minute. That is only a three degree drop from the normal temperatures of 98.6 and 102, respectively. It doesn’t take extreme conditions to create a very dangerous situation for your pup.

A determining factor in dog hypothermia is lack of acclimation to conditions. Say a hunter lives on Texas coast where the temperatures seldom fall below freezing. Our hunter has a big trip planned for January in Kansas with ol’ Buster. Temps there are in the teens with a downright frigid wind chill. Ice-covered water is the norm with possible snow flurries thrown in.

Mallards are flying well at first light and a couple are knocked down early. Buster’s ready to go and hits the water with enthusiasm. His entire body is shocked by that cold water and cold air. Coming back with bird two, he is shivering uncontrollably and well on his way to danger.

Dogs lacking the proper coat and resistance to cold are often dropped into conditions they haven’t experienced all season. There’s no sense risking the dog’s life for a few days of hunting. Leave pup at home or back at the lodge as there’s no greater tragedy for a dog owner than watching your partner succumb to the elements.

Symptoms of hypothermia include violent shivering followed by lethargic behavior. Retrievers are especially susceptible to hypothermia due to the nature of their job (fetching up birds in water), but it can happen with any breed in temperatures way below their normal exposure.

Immediate treatment for hypothermia means moving the dog into a vehicle or structure. Wrap the dog in a blanket (it’s always a good idea to keep one around during the season), if possible, or turn the truck on and get the heat going. If the dog doesn’t show signs of improvement quick, seek immediate veterinary assistance.

Hyperthermia is the elevation of body temperature to dangerous levels. A rise in a dog’s temperature above 103 degrees is considered hyperthermia. At 106, the dog has entered full on heat stroke—above that, death is a strong possibility.

Imagine our friend Buster is now in a southern dove field on opening day in early September. Buster is busy picking up birds for several people and soon his body is feeling the effects of rising temperature. Heavy panting is not keeping up and while he is drinking water, the temperature keeps rising.

Soon Buster will collapse and be in grave danger. Once again, this can be prevented easily by not hunting the dog in overly hot conditions. Keep him at home and wait until the cooler conditions of a morning hunt, or later in the season, if adequate shade is not available in the afternoon. Without a good place for a dog to cool off (a pond, for example), afternoon hunts with dogs should be avoided.

Keeping rubbing alcohol handy is a smart idea in the hot months. This product is a great source of evaporative cooling when applied to foot pads, arm pits and the dog’s groin and flank areas. Don’t put your dog into an ice bath as it can cause an unwanted shock to the system. Cool water is much better and unlikely to cause blood vessels to contract, slowing down heat loss. Once again, if possible, get the dog to a vet immediately. He/she will know the best course of action to take.

Cuts, scrapes, and bruises, are injuries every gun dog is susceptible to afield. Most of the time, these are minor issues and do not affect the dog continuing the hunt. Some dogs are subject to more dangers involving abrasions. Hog hunters often use hounds and other breeds to chase pigs.

Hogs have teeth, and the question for a hog dog isn’t if they are going to be cut, but when. The hope is that it isn’t too severe and can be stitched up or glued shut easily. Hog hunters should always carry a first-aid kit for minor abrasions. It’s a good idea for every hunter.

Retrievers and pointers are certainly not immune to abrasions. Thorns, sticks, holes and a myriad of other obstacles are often present and ready to strike. Keep a close eye on the dog’s behavior. A noticeable limp, a sharp cry out, these are signs that something has happened and needs to be checked.

The same stuff that can cut skin can harm eyes too. Hard-charging dogs seldom slow up the way humans do in the face of brush. They run in with reckless abandon. Limbs whipping by, brushy sloughs, even high grass can irritate an eye.

Fortunately, in most cases eye injuries are not serious. That doesn’t’ mean that a cornea can’t be scratched, or an eyeball punctured. There are dog goggles available if risk of eye problems is extremely high. Keep a bottle of eye wash handy and flush the eye when a problem is encountered. Head to the vet if irritation persists.

Read Next: Gun Dog Training: How to Transcend Treats

Plenty of obstacles are on the ground and ready to harm a dog’s foot. Cut pads and punctures can derail a hunt and lead to infection. Upland dogs scouring the deserts of south Texas and Arizona encounter thorns and cactus spines lurking at every turn. Retrievers deal with corn and soybean stubble, both can stab a foot and put a dog out of commission for a lengthy period.

Dog boots are available to help protect the dog’s feet and lower leg. They can be difficult to keep on, most upland guides use duct tape to secure them to the leg. The hardest part of foot injuries for sporting dogs is the down time. Wounds must be allowed to heal on their own. Stitching of the foot and pad area is not recommended.

There are a lot more species of wildlife in the field than the quarry you are after, and some of these can be downright detrimental to dogs. Two that always command attention are snakes and alligators.

Snakes are an issue for sporting dogs and family pets alike. There are trainers who offer snake clinics that teach dogs to avoid them. Commonly, this training involves introducing the dog to a rattlesnake without fangs or venom. As soon as the dog gets too close, an electrical stimulation is applied by an electronic collar. The dog smells a snake in the future and memory kicks in, sending the dog the other way. If the dog is bitten, seek veterinary attention immediately. Do not wait to see what happens.

Alligators present an entirely different set of problems and cannot be easily trained to avoid. Florida, Texas, Louisiana, Mississippi, Georgia and the Carolinas all have very healthy alligator populations, along with many other states. Warm temperatures have the big lizards on the prowl and ready to eat ol’ Buster! Best thing to do, leave him at home if there is any chance of alligator encounters.

Waterfowl hunters need a set of rules established before the hunt is underway. Retrievers are susceptible to being shot primarily when chasing cripples, so guidelines need to be set regarding that situation. The simplest rule to live by is don’t shoot when a dog is on retrieve. In most cases, the dog’s owner should be the only hunter dispatching a cripple.

This puts all the responsibility on the person most likely to be very careful with the shot. Retrievers should be steady to shot before ever entering a hunt. Repeat, the only safe dog is a steady dog!

Upland dogs also need to be steady to shot to minimize the chance of injury from gun fire. Be completely sure that the dog or dogs are clear before taking the shot, and never shoot a crippled bird on the ground unless the dog handler orders you to.

The more dogs on a hunt, the more chances for accidents. Upland hunters often run multiple dogs and duck and goose hunters use two to three dogs working together on occasion. Running dogs together is all about the level of training they have received. Older, more experienced, and steady dogs are fun to hunt together. Young dogs need work on their own with handlers focused on their performance.

Upland dogs must be able to back and honor the first dog on point. Period. A dog that is working on its own and not trained to respect the other dogs will disrupt a fine day afield. This point cannot be stressed enough: A hunt is not the time to train. Repeat, hunting is NO time for training. The groundwork for a quality dog must be laid in controlled environments and not in the unpredictable world of the hunt.

Working dogs need good food in the right quantities for optimum performance. A general guideline is 30 percent protein and 20 percent fat in the food fed to working dogs. Problems arise when dogs are overfed and underworked. That leads to health problems related to the dog being overweight and/or not in prime condition.

It is hard to feed a dog too much when it’s training and hunting on a regular basis. Those calories are needed for the energy required for strenuous activity. Upland breeds running hard for miles need more than retrievers bringing back 10 birds in a morning. Use common sense, and make sure the food is providing all the nutrients needed. Cut back to a maintenance feed with less protein and fat in the offseason unless the dog is training often.

A peril that no one likes to talk about is a dog not making the grade. Otherwise known as “washing out,” the dog doesn’t have the drive and talent for the job at hand. That means different things to different people. Field trialers expect the highest level of skill and anything less is not acceptable. Many field-trial washouts make excellent hunting dogs.

Others are looking for a good field dog, one that can handle the basics with at least some level of style. The word “meat dog” is used a lot to describe hunting dogs with basic skills. As in the dog is “bringing back the meat.”

It can be tough to turn a dog you thought was going to be a stud (and you paid a bundle of money for) into a pet, but sometimes, they just don’t make the grade. If the dog shows fear or complete lack of desire, then it’s time to move on. When that time happens depends on the dog. Often it’s a question of maturity. One day the “light bulb” goes on and the dog gets it. Don’t give up until it appears the dog doesn’t want to be there no matter what is tried. Then it’s time to punt.