There’s a huge opportunity to bring in more Black and minority hunters and anglers, but first, we have to make some changes 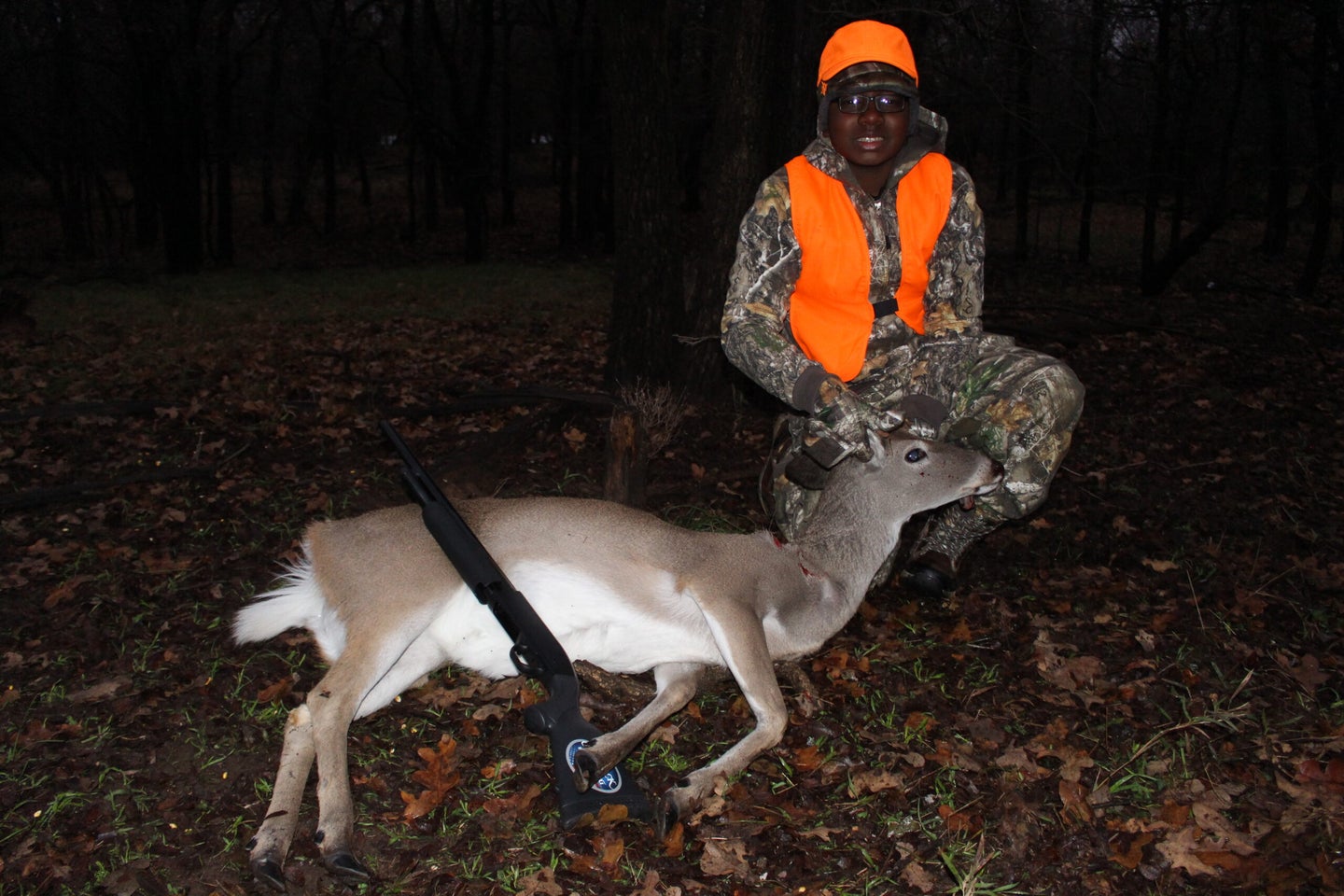 As a fat Texas doe stepped into the clearing about 30 yards from the blind, Jaysean eased his 20-gauge shotgun out the window. He took aim and squeezed the trigger. At the sound of the shot, the doe dropped as if struck by lightning. A smile of satisfaction spread across the 13-year old’s face. It was his first deer, and the moment held more meaning than words could describe. First hunts like this one play out each season across America, but this one was extra special to me. Jaysean is Black. And now, he is a hunter.

Many hunting and outdoor organizations say they want more racial diversity, but the current efforts to bring new people into the fold leave much to be desired. Black people (or any other people of color), are rarely given a voice in hunting and fishing media. Instead, the outdoors is continually portrayed as a white, male domain. This portrayal can sometimes be unwelcoming to people of color. I say this as a middle-aged Black man with 30 years of hunting experience. I know what it feels like to love the outdoors, but to rarely see someone who looks like me represented there.

This is why I host hunts each year to introduce more aspiring hunters, like Jaysean, to the outdoors. Despite stereotypes that “Black people don’t hunt” or “Black people just aren’t interested in the outdoors,” I know that there’s a tremendous desire among Black people across the country to learn about hunting, fishing, and the outdoors. I know because they keep asking me to take them hunting. I’ve recruited and helped mentor roughly 50 new hunters since 2014.

So why aren’t we seeing better results overall? The problem, unfortunately, is that most organizations don’t know how to effectively reach minority communities, while other orgs simply aren’t interested in learning. The good news, however, is that this isn’t an impossible problem to solve. I know there are effective ways to recruit and mentor more minority hunters and anglers, because I’ve tried them. If we are going to succeed in our recruitment efforts, we’re going to have to start making the following changes.

1. Hire experienced Black and minority hunters to do the recruiting.

Most organizations are approaching recruitment and inclusion the wrong way. Many efforts to increase diversity in hunting are led by people who do not resemble minority communities. If we had more Black and minority hunters in recruitment positions, organizations and agencies would have more success. And as those organizations bring more minorities into hunting, those new folks would in turn bring more aspiring hunters with them. Recruitment isn’t fully the responsibility of the outdoor industry—it has to happen at the grassroots level, too. I hope that the current movement to confront racism in America leads companies to realize they need to change how they market products, and the outdoor experience, to minority communities. This needs to happen in the recruitment world.

I’ll use the oversimplified analogy of setting a decoy spread for ducks. If you want to bring in mallards, you set a spread of mallard decoys. When mallards fly overhead, they’ll look down and spot ducks they identify with. They see the spread as a place where they belong. Sure, it’s possible that mallards will land in a spread of teal or diver decoys, but hunters will do much better setting decoys of the species they want to attract. This is essentially how it works when trying to recruit new minority hunters to an event.

Many hunting and outdoor events are held each year with hopes of attracting a diverse audience, but time and time again these events fail at that mission. Why? Try putting yourself in the shoes and mindset of a minority person who is interested in hunting. All their lives they have been conditioned to think hunting and the outdoors are not for them. They have only seen white hunters and outdoorsmen. Why would they show up to an event where they know they will feel like they don’t belong?

Now, imagine: What if these events were hosted by Black leaders and other people of color? Minorities would be more likely to stop by, ask questions, and become engaged. They see someone who looks like them, someone they may relate to, and someone who will give them truthful, real-world stories about what it’s like to be a minority hunter or outdoorsman. This is not to suggest that a white hunter can’t do the same thing, but having minority leaders out front is critical.

Just like that decoy spread, events can’t be silent and motionless. Organizers must create noise and excitement in order to make a person want to drop in and ask that first question.

3. Avoid the one-style-fits all approach.

The display of certain symbols, political affiliations, and dress styles are all reasons why some minorities shy away from recruitment efforts. Traditionally, most hunting recruitment efforts and events are not marketed toward minorities. They are often tied to a state or county fair, or are embedded in programs like 4-H, Boy Scouts, or some other club. Historically, these groups are not diverse, and thereby present the same problems we discussed above.

Music and guest appearances at outdoor recruitment events are also important. If the content at the event doesn’t seem interesting to the minority community, people won’t show up. Each outdoor recruitment effort should be individually planned and designed for a specific audience based on recruitment goals. A one-style fits all approach will not work.

It is not because we are all so different, but many of us do have different cultures, beliefs, and social experiences. These differences need to be acknowledged and respected. The social climate at these events will determine how well people of color will respond. After all, the outdoors can seem like a dangerous and unfamiliar place if you haven’t been properly introduced. It takes trust and rapport in order to get people out of their comfort zones.

There’s a tremendous opportunity to reach, recruit, and connect with potential minority hunters and outdoorsmen through outdoor television shows, online media, and magazines. The outdoor television industry is, after all, a multi-million-dollar business with hundreds of shows and millions of viewers. Yet less than one percent of these shows feature a person of color, despite attempts from Black hunters and outdoorsmen to produce such shows.

It sends a powerful message when a person sees themselves reflected in an activity they want to do. Unfortunately, it sends an equally powerful message of how reluctant and non-inclusive the hunting industry really can be when Black show producers look for sponsorship and are turned away again and again. Of the handful of outdoor shows produced by Black outdoorsmen, most have hit a brick wall when it comes to getting sponsorship and financial support from the hunting industry. Seeing is believing, and what better way to show diversity and to create inclusion than by showing people of color having fun in the field?

While most diversity and inclusion directors focus on internal issues within an organization, why not add hunting and outdoor outreach as an additional duty? A small staff could share this responsibility. There’s an old saying: “If it’s not evaluated, it’s not important.” This maxim is particularly true when it comes to creating outdoor diversity. Better progress can be made by making a committed and deliberate effort to diversify America’s hunters.

We’ve done enough talking about diversity. We must actively work to create and showcase it. There are dozens of federal, state, and private organizations that claim to want diversity, but don’t act on this, or produce questionable results if they do. Tying a person’s job security to their outdoor recruitment results is one way to foster real progress. Otherwise, we are going to continue talking about diversity for the next 100 years without seeing it.

Another option is for organizations to create minority-led recruitment teams, whose sole responsibility is to organize and host recruitment efforts, thereby growing and promoting generations of minority hunters. We can measure those results, too.

There are hundreds of thousands of minority hunters in America with many more willing to follow in their footsteps. There just needs to be more of an effort to properly recruit and mentor them. There is real power in showing groups of minority hunters together versus the lone “token” individual. It’s important to connect with those folks who are interested in hunting but hesitant to venture into environments that seem unwelcoming.

But talk is cheap. At some point those of us in the outdoor industry must lead, follow, or just get out of the way of progress. We all owe it to Jaysean, and the next generation of hunters like him.

Eric Morris is the producer and host of N.onT.ypical Outdoorsman TV, a show dedicated to improving diversity in the outdoors. When he’s not hunting, fishing, mentoring hunters, or working on his show, Eric can be found spending time with Razor, his Chesapeake Bay Retriever. Eric lives outside of Atlanta, Georgia, and is a passionate advocate for increasing racial diversity in hunting and the outdoors. You can reach him via email at nontypicaloutdoorsman@outlook.com.