Married to the Game: Becoming a Great Hunter Means Living in the Moment

Leave everything behind and focus on the hunt 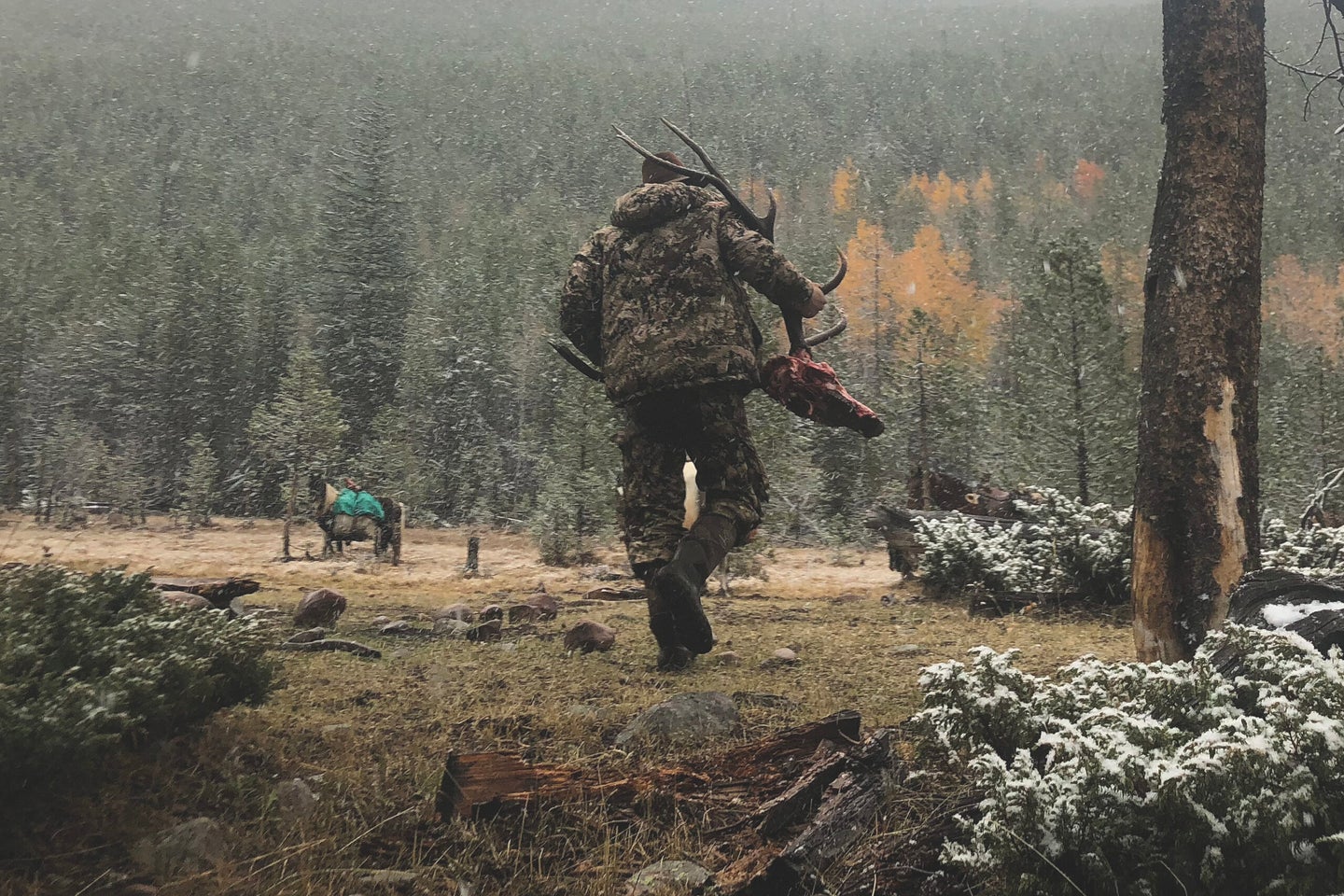 The author, carrying the last load to his packhorse. Natalie Krebs
SHARE

Fog hung in the air, obscuring the old-growth pines ahead and settling into the hollows of the mountainside. On the breeze, I sniffed for the barnyard odor I’d caught a moment before—the faint scent of elk. My footfalls were silent on the moss.

At that moment, there was nothing else in the world—I was focused only on the smell of elk in the drifting fog.

Well-meaning folks have told me that my singular focus on hunting becomes uncomfortably intense during certain points of the season. They tell me this as a sort of common courtesy, the way you might warn someone that their passenger-side tire looks a little flat. But those same folks know that I’m singularly good at putting meat in the freezer. I don’t say that to toot my own horn but just, I suppose, because it’s true. I like to hunt. And when it’s time to hunt, that’s what I am going to do.

We human hunters possess the same five senses as our fellow animal predators: sight, hearing, scent, touch, and taste. Most of us like to think we have a sixth one, called instinct, though in my opinion it’s really more like intuition. During the days when I guided backcountry hunters all fall, I could feel where the elk would be. I can’t describe how I did this, only that it worked. I’d stand in the dark, waiting for my clients as they readied for the day’s hunt. I would think about my territory, consider where the elk might be, and then lead my hunters through the dawn to a place that felt right. We would almost always find elk. I know other guides and hunters who spend a lot of time in the woods have experienced the same thing.

To build this sixth sense, a hunter must focus to the point of ignoring everything else. This almost always comes at a cost. Work, responsibilities at home, and relationships are left to languish. Like that crisp September day when I bombed out of the Oregon high country on my fifth wedding anniversary. My wife and I strolled along a small-town street for an hour, enjoyed an ice cream cone, and watched our baby daughter play. Then I drove an hour and a half back to the trailhead and hotfooted it 6 miles up the mountain in time for an evening hunt. No candlelit dinner. No romantic stargazing. I was hunting and, maybe wrongly, that took priority. After I tagged a bull, normal life could resume.

This kind of devotion is not for everyone, and it sets certain hunters apart. These people are most content when the pressures of society have fallen away, leaving their senses tuned to nature. They can live out of a backpack, they often hunt solo, and they thrive on challenge. Living becomes simple: eat, sleep, and hunt.

One friend of mine is beguiled by trophy mule deer, and used to spend all his time scouting and hunting them. The cost to his personal life was…well, let’s just say it was high. But he managed to tag mule deer bucks that topped the magical 200-inch mark with a rifle, muzzleloader, and bow, and all on DIY public-land hunts. He did not achieve fame or fortune through killing these deer, but neither would he trade a single moment of hunting them.

I’ve noticed that many ultra-focused hunters devote their intensity to their families when the hunt is over, and they have remarkable kids and spouses who make their lifestyle possible. It’s also true that some do not, and their home life suffers for it. I know none who have become wealthy—their attention is ­always elsewhere.

On that foggy elk hunt many years ago, my attention was set on finding my first branch-antlered bull. Seventy yards away, a giant dead pine materialized through the mist, moss carpeting its trunk and tangled roots. Two elk fed there, both of them cows. With all the yearning of a young hunter’s heart, I watched the pair for 40 minutes, willing a bull to appear. But the bull did not show.

That was the first day, and I hunted hard for three more days without seeing or smelling another elk. Dusk fell on the fourth night, bitterly cold. The first elk I’d seen since opening day appeared, surprising me with his buckskin hide and tall antlers. I focused once more, this time with my crosshairs on his shoulder.

As the years have passed, my intense perspective on hunting has matured. My favorite thing now is to watch as my young son scampers around, hunting like an eager fox. I enjoy showing him the sign left by a big buck, where to find cottontail rabbits, and how to adjust his binocular. He may not know it yet, but I’m getting him ready for the day when he’ll want to head up the mountain on his own and leave everything else behind—at least for a little while.