There’s nothing easy about hunting public land, but these tips will up your odds 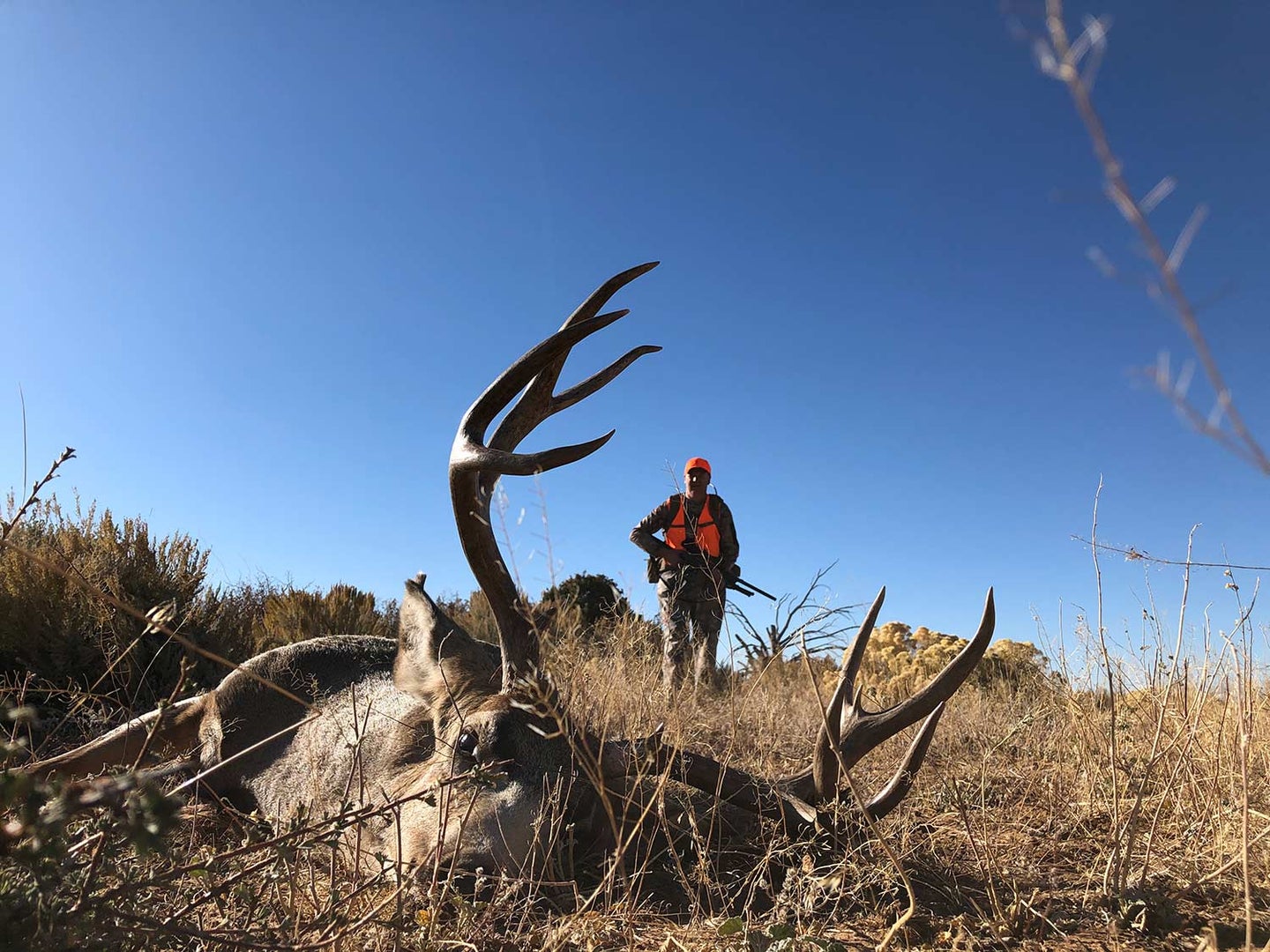 Low in the west the sun shines grimly, slow-cooking me where I lie prone atop a jagged rock outcropping. I’ve been here for five hours, moving nothing more than my eyes. This morning I watched a big Coues deer buck fade into a cliff-bottom stand of oaks, and I intend to be waiting when he reemerges. I spotted him from miles away, hiked hours to get into position, and am now atop the only vantage that offers a shot…if the buck steps out. Sometimes Coues bucks get up during midday and relocate, and I hadn’t dared risk missing that opportunity, if it materialized. Subsequently I’ve been in position all afternoon, sharp rocks restructuring my belly and ribs, the sun barbecuing my back and brains. This is public land, and to kill big game here a hunter must pull out all the stops.

Opportunity to hunt is becoming limited nationwide, mostly because private lands are being leased up or purchased by outfitters and wealthy sportsmen (the East), but also because our human population is burgeoning (the West). No longer is it a simple matter to knock on a farmer’s door and gain permission to hunt on his land in exchange for a few days spent mending fences or bailing hay. As a result, hunters often must turn to hunting public lands. But public ground, especially considering the ever-increasing hunter pressure, is a tough place to kill big game. Here are some tips and tactics that will help you put meat in the freezer and antlers on the wall.

I believe that the single most effective weapon in my public-land arsenal is bivy hunting. This means putting a lightweight camp in my backpack, and living in the woods rather than hiking in and out twice a day to hunt. You’ll save tremendous energy and effort, be in position to hunt with a minimum of disturbance, and stay more focused. Just this fall, I loaded my backpack, shouldered my rifle, and disappeared into a public-land area to hunt Coues deer for several days. I camped atop a mountain that offered good glassing vantage points, and shot my best-ever Coues buck from that very mountain, an old monarch with teeth worn to the gums. Learn to bivy hunt; it will pay off on public land.

It’s critical to understand the game you are hunting and what their everyday needs are. As an example, I recently purchased an over-the-counter elk tag and went hunting in a public-land area I’d never set foot in before. Prior to the hunt, I spent hours studying the topography, locating potential water sources, and figuring out access. I know what elk need, so I looked for an area that would potentially provide that habitat. I went in blind, hunting the first night from the trailhead. The second night I hiked deeper, bivouacked out, and killed an awesome bull. Understanding what elk need made that possible. The same holds true for any big-game species. For example, if you’re looking for mule deer search out an area that offers access to water, let’s say within 2 miles (you have to pack the animal out if you kill one, and the deeper in you go the harder that will be). Look for good browse vegetation, including plants like bitterbrush, Gamble oak, sagebrush, catclaw acacia, and so on. Finally, study areas that are tough to access and give the deer some protection against hunting pressure. Find these elements, and you’ll find deer.

More private lands are off-limits to hunters than ever before, and to ethically hunt checkerboard public/private land regions you have to know exactly where you are at all times. OnX Hunt provides that capability, along with awesome mapping tools, marking and sharing waypoints and routes, and lots more. With the ability to map private/public land boundaries you raise your game to the next level (in certain areas). Let’s expound on the mule deer strategy outlined above. Say you’ve found public land that offers water, cover, browse— all the previously-listed criteria. Additionally, there is a lush green private-land alfalfa field in the nearby lowlands. Trust me, local deer will use that green alfalfa field to fill their bellies. Now, using onX you can determine exactly where the private/public land boundary is, and set up to ambush deer as they leave the alfalfa field to bed on public land for the day. If you don’t already have it, download the onX app to your phone; it’ll help you kill game. More importantly, it’ll keep you away from trespassing on private property.

Read Next: How to Bivy Hunt for Giant Public-Land Mule Deer

Years ago I sat on a ridge, glassing distant terrain for elk. Winding along the base of the ridge was a gravel road. Soon I heard a diesel motor idling along the road, accompanied by occasional mews from a Hoochy-Mama elk call. In disbelief I turned my binocular to the vehicle, and sure enough the driver was rolling his Ford F-350 diesel truck up the road, rifle on the seat, and his arm out the window, squeezing the Hoochy-Mama call at regular intervals.

That’s not the way to kill elk. The point of this story is that many public-land hunters prefer to drive their truck or ATV around, looking at the scenery and hoping to get lucky. Most likely they won’t. It’ll be you, seated on a good vantage point and studying vast amounts of territory through your binocular, that has the best opportunity to spot and kill game.

Most hunters go home during midday to catch a nap, mow the lawn, eat lunch, or whatever. Most big game will get up for a brief stretch and a snack during this time, and they know it’s relatively safe because the majority of hunters have left the area. If you hunt throughout the entire day you can be in position when a bull elk takes a trip to his favorite wallow, or that big buck wanders around looking for feed. Several years ago a childhood friend of mine called with the news that his oldest son had drawn one of Utah’s finest limited entry bull elk permits. We planned and strategized, and opening morning found us bivy camped on a little hilltop deep in elk territory. The morning was slow; all we spotted was three spike bulls feeding blissfully in the morning sunshine. We packed up and snuck through the timber a couple miles to a big meadow with several wallows in the middle. The area is very secluded and bulls like to go to the meadow for a big drink and a refreshing splash in the wallow during midday, while their harem is sleeping off a night of debauchery. We hadn’t spent five minutes at the meadow when a giant bull showed up for a drink. My friend’s son was shook to the core by the bull’s size, but still managed to put a couple good shots into the bull, dropping him in the meadow. Had we hiked back to base camp for a nap, we never would have seen that bull.

6. You Need To Practice More

The most important moment in any big game hunt is the one where you press the trigger. I’ve known countless hunters who do not train with their rifle or bow, and then when an opportunity presents they whiff the shot. When you’re hunting public land you can only hope for one good chance. You should train with your rifle or bow until you can shoot it very accurately from field positions and at greater distance than most hunters can, because that will be the difference between punching and eating your tag. Train to stay cool and focused under duress. Because after researching an area, living out of your backpack, and hunting with real intensity, missing your shot at that one good opportunity is heartbreaking.

The sun sinks behind the western mountains, and still I lie on my rock pile. Suddenly it’s cold, and I fight to keep from shivering. One more time I scan the cliff-base oaks for the Coues buck. Did he move before I got into position? Am I mistaken about where he actually went to bed? I don’t believe it, so I scan again. And there it is, the curve of a main beam all but hidden in chest-high grass. Slowly the entire buck comes into focus, standing motionless. He stood from his bed and is now looking, feeling, and listening for danger. The distance is just under 300 yards, steeply uphill. I adjust my turret, settle the crosshairs, and press the trigger. My patience—and all the skills I’ve acquired over the years hunting public land—pay off. The same can happen for you, if you’re willing to put in the work.