Most outfitters are reputable. Some aren’t. Here’s what to watch for, so you never end up in a predicament like I did 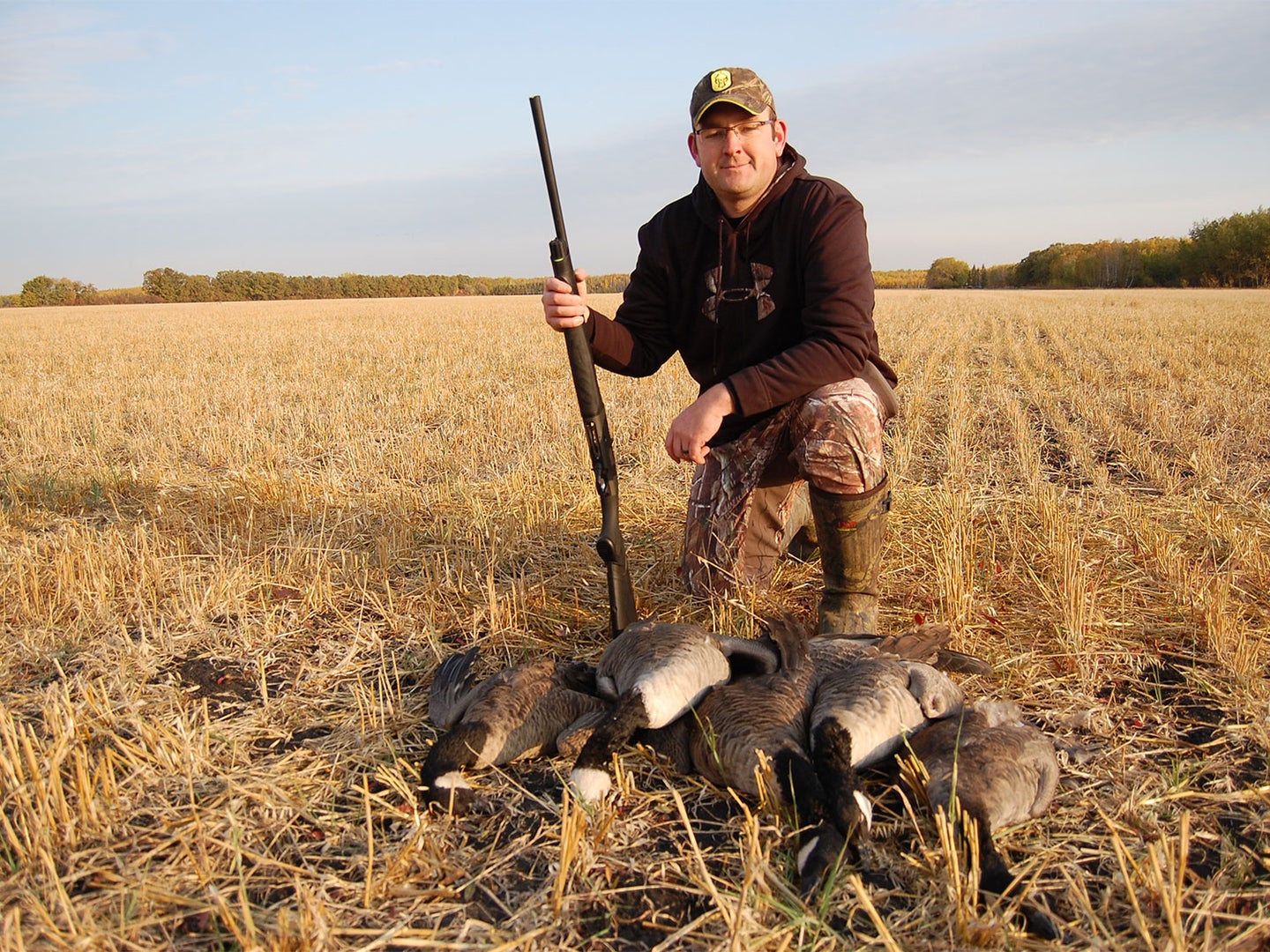 The author with a limit of Canada geese from his first hunt in Manitoba. Joe Genzel
SHARE

The first guided waterfowl hunt I ever went on was almost my last. At the time, I was a rookie outdoor writer and had never hunted more than 30 minutes from home. Now, I was thousands of miles away from Illinois, chasing puddle ducks and geese on the Canadian prairie. Our guide was an ostentatious American. At best he was a blow hard. In reality, he was a poacher. Several years after I hunted with him, he plead guilty to multiple migratory bird law violations, including burying untagged birds and shooting at ducks from inside his vehicle in order to scare them up for a hunting party. He paid more than $20,000 in fines and lost his outfitting license.

This year, many American waterfowl hunters likely won’t be able to make it to the Canadian prairie this fall due to the U.S.-Canada border shutdown. Outfitters will be operating in new locations here in the States to try and recoup some of the money they would have made up north. And it’s clear that folks are eager to hunt the Prairie Pothole Region even if they can’t get into Canada. South Dakota saw an increase of more than 1,500 non-resident applications from 2019 to this year (which is considerable), according to Jona Ohm, the strategic communications director for South Dakota Game, Fish, and Parks.

With more waterfowlers looking to book hunts in the Lower 48, it could be a very lucrative season for guides in the U.S. But that could also open the door to fly-by-night operations interested in lining their pockets, but not staying legal. You’ll need to be on the lookout for guides who aren’t playing by the rules this fall.

When I hunted with an outfitter for the first time, I was green, and couldn’t identify the bad habits of an illegitimate guide. Now that I am a more experienced and a bit more well-traveled, I recognize that there were multiple signs that he was breaking the law. If you’re going to hunt with an outfitter this year, particularly a new one you don’t have a relationship with, follow these tips so you know what to watch out for.

The first thing I look for now in a new duck camp is cleanliness. If a guide takes the time to keep his or her lodging clean, it’s a good indicator they play by the rules. That was not the case in Canada. Upon arriving, there were dead Canada geese laying on the front lawn outside the cabin. You could tell they had been there awhile as the flies were buzzing all around them. Back then, I didn’t know the migratory bird laws well, and untagged birds in piles is a big no-no. You have to be able to identify which birds are yours at all times, and they cannot leave your possession without being tagged. Plus, throwing dead birds in the grass to bake in the sun all day is not something a law-abiding sportsman would do.

I also like to take a look at the butchering shack (if there is one) to see how they are processing birds. Some outfits will clean birds for you, and there are a variety of laws that must be followed. Make sure you are properly filling out tags before handing the birds over to your guide for processing, and that they return the birds to you tagged and with a wing or the head attached for identification purposes. Take all your birds home. Or donate them to someone directly. Don’t leave this process in the hands of the guide. Our outfitter in Canada had clients fill out donation tags to him. In reality, most of those birds were being disposed of in a massive pit, which none of us knew about until the court settlement. Luckily, an older, more seasoned hunter was with us and told me to take all my birds home, which I did.

2. Ask Game Wardens (and Guides) Why You’re Constantly Getting Checked

Here in Illinois, I have been checked by a game warden twice in the last decade. In some states, hunters are checked more often. On my trip to Canada, we were checked after every hunt. That’s not normal, even on the prairie during the height of duck season. I didn’t know that, and thought it was just how it was in Canada because I had never been there. If you’re with an outfitter and get checked by a warden once, no big deal. More than that, and I would grow suspicious, especially if it’s the same warden, because that likely means he or she is watching that outfitter closely for a reason.

If you are checked multiple times during a trip, you should absolutely question the warden as to why. Also, ask your outfitter and other guides why they think it’s happening. If there’s any indication that something isn’t on the up and up, politely leave camp (more on that later). I know you have paid good money to hunt, but losing a little cash now far outweighs being fined, or worse, getting caught up in a federal investigation.

3. Check Out Your Guide’s Truck

Most duck guides are going to have a messy truck with Grizzly tins and a few crushed up Busch Light cans in the bed. That’s no problem. But if the truck bed looks like a ball pit of beer cans, be wary. Anyone who would openly flaunt that they’re drinking a 30-pack every day probably isn’t averse to shooting a few geese over the limit. The scouts in Canada were full-blown drunkards and would show up still half in the bag to lead us to the field. One morning, they came late and we went to three separate fields (each with hunters already set up in them). At the last field, the scout said “you will just have to hunt here,” and we set up in the same stubble as another group not more than a few hundred yards away from us, ruining their hunt and ours.

If you’re ever in the same field as another group of hunters with an outfitter, that’s not normal. Or, if an outfitter sets up on a treeline in an adjacent field to another group of hunters, he or she is 100 percent edge hunting. That means they couldn’t get in the good field and are trying to kill ducks and geese either before they get to the feed or are hoping to shoot swing birds, which are circling the good field. It’s not illegal, but it is a bush league way to hunt. If an outfitter is willing to hunt that way, bending the law isn’t too far of a stretch.

4. Avoid Guides Who Have to Kill Them ALL

There are competitive outfitters who want to get clients on birds consistently, and then there are full-blown blood-lust guides who have to get their limit every time. In Canada, we were hunting with six to eight guys. Daily limits were eight ducks and five dark geese a piece, which is a lot of birds to keep track of, but is no sweat for a good outfitter. Most experienced guides will stop short of a limit by a few birds in case there are any ducks or geese the dog missed. This is particularly true in Canada where the fields are massive. You will often find another dead bird picking up the decoys, especially if it’s a duck shoot.

But our guide had to kill them ALL. We had an awesome morning, shooting more than 30 geese in less than 45 minutes, but were still shy a few birds for full limits. My buddies who organized the trip told the guide they wanted to stop and pick up, because we had sailed a few big honkers, which the dog had brought back, but there might be one or two more out there. They had to argue with the guide to end the hunt because he wanted to kill a full limit. In the end, a few guys got sick of the banter and just began picking up decoys because the guide wouldn’t budge.

Then, as we were loading the trailer, a goose flew by and he tried to shoot it. Seconds later a pair of grouse flushed, and we heard him yell “CHICKENS!” as he ran his 12-gauge to the plug. He chastised us for not being loaded up to kill anything with feathers. None of us even had an upland license, but that didn’t stop him from calling for us all to shoot when the birds popped out from the prairie grass. If a guide is all-consumed with killing, walk away. First of all, it’s not a fun way to hunt. I’ve been with several outfitters who run clients to the “hot blind” and try and get limits filled as fast as possible. That’s an annoying and pressure-filled way to spend a morning. Also, if a guide is always out for blood, he or she is more likely compelled to break game laws in order to get it done.

On my trip, one of the more experienced hunters realized what was happening pretty quickly and decided to exit camp after the first or second day. He didn’t have to explain anything to the outfitter, just told our hosts he was out and drove back to the airport. If you don’t have the luxury of an intermediary between yourself and the outfitter, just make an excuse, like a family emergency or your hunt test champion Lab is sick and you need to get back home. A little white lie is fine if your guide is a criminal. Don’t ask for your money back, just take the financial hit and head home. But DO report what you’ve seen to the state or provincial game agency. The fewer criminals out there, the better it is for the birds and our sport, and your information will only help put a crooked guide out of business for good.