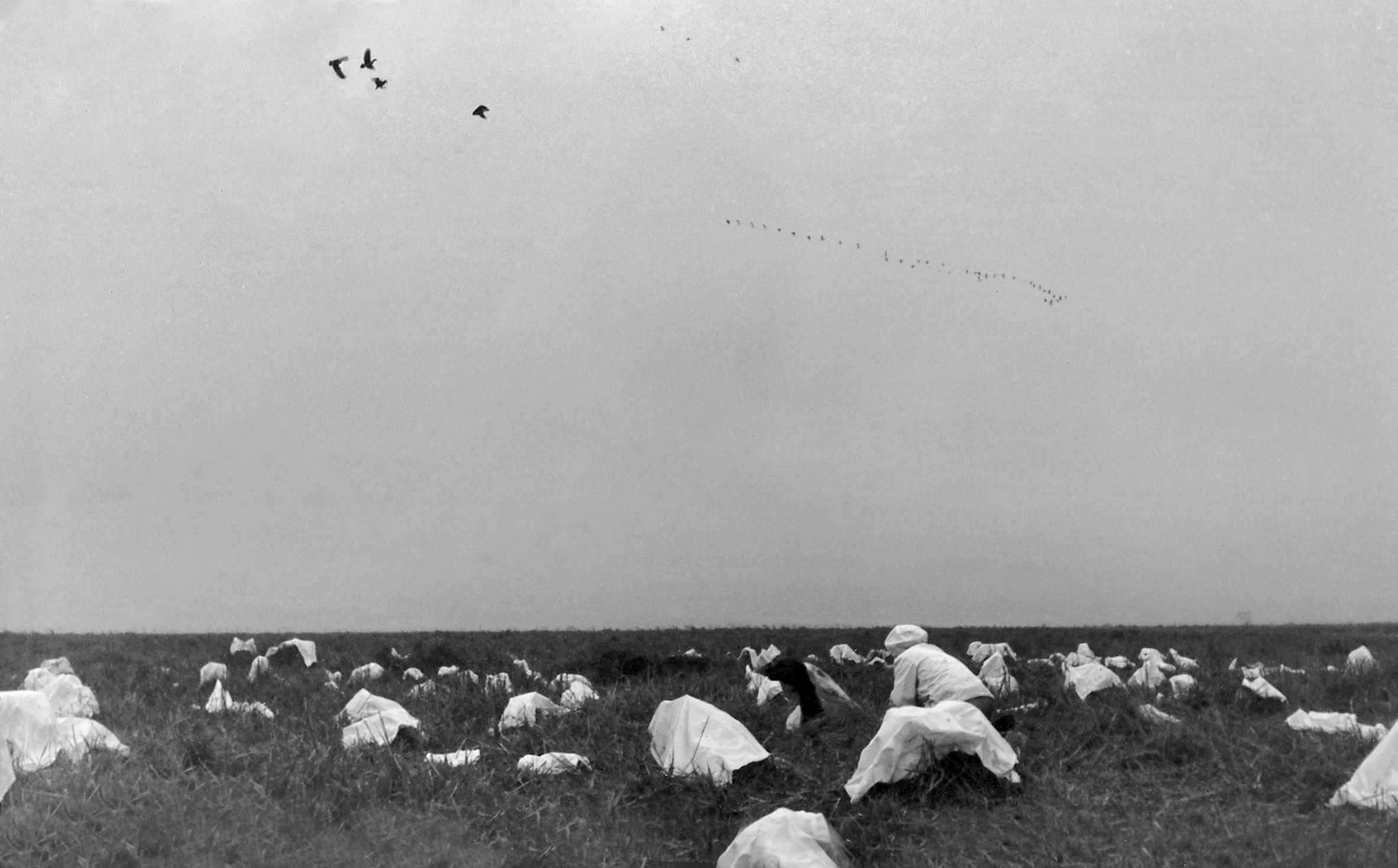 In the late 1990s and into the early 2000s, Texas’ coastal prairie was THE SPOT to hunt snow geese. For years, I guided hunters from all around the U.S. and Mexico for light geese. Most hunters now target these birds during the spring conservation season, but back then Texas guides still primarily hunted in the fall, armed with mouth calls (not e-callers) and white rags tied to dowels as decoys.

With the change in agriculture practices, you can hardly kill a snow goose in coastal Texas anymore, but some of the old-school methods we used more than 30 years ago still work. Snows are a very adaptive species, and today’s hunters should consider using proven tactics that these smart geese haven’t seen in more than three decades. I’m not saying you can throw a few hundred rags out like we used to back in the day and kill a pile of white every time. But there are some tactics from a bygone era that will work…and put more snows in your decoys.

1. Sit in the Decoys

In the late ’90s, the layout blind changed how goose hunters approached concealment, but snow goose guides on the Texas coast never embraced them. Our way was dawning a white parka and laying on a backboard, which are two flat wooden boards—a long and short piece— screwed together to create a head/backrest. The spread was all white, so what better way to blend in than wearing the same color?

As the spring conservation season gained steam, more hunters embraced the layout blind. They are comfortable and a great way to eliminate hunter movement. The blinds do come with drawbacks. One is they are often cumbersome and a pain in the ass to transport into and out of the field (many farmers will not let hunters drive in this time of year because the fields are so wet). Then there is set-up and take-down time. Add in brushing and possibly digging in to lower the profile of the blind and it all adds up to inconvenience and too much time wasted, especially if you are chasing the birds for a week straight.

Go old school and find a white parka, Tyvek suits, and/or white bibs. This tactic has come back in a big way to snow goose hunting These garments are lightweight and effective. Get a seat, grab your choice of whites, and blend into the decoys. Movement must be kept to a minimum and faces need to be covered, but this is still a great concealment method.

2. You Can Still Edge Hunt Snows

Conventional waterfowling wisdom lends to always setting the spread in the center of the field. That’s never a bad location but don’t despair if conditions prevent hunting from the middle, especially when running traffic on white geese. Levee edges, ditch lines, tree lines, and even field turn rows can be a good place to hide. The key to hunting less than ideal locations is having confidence in the decoys to do their job.

There is one important factor when setting up on a ditch or tree line. Snows will often feed close to these areas, but they seldom cross a 20-yard buffer zone. David Melton, owner and operator of Delta Ducks Hunts in Tunica, Mississippi, discovered this during a down duck hunting year.

“We don’t normally hunt snow geese in the regular season, but slow duck hunting forced us to chase them,” he said. “We learned on the fly, and some of our best hunts were over small wheat plots near ditches we could hide in.”

Melton and his guides noticed how snows reacted to ditch lines while scouting.

“The geese would always stay about 20 yards from the ditch and in a straight line,” Melton said. “We set out decoys the same way and saw our hunt success rates rise.”

Take the time to really look at the geese and study what they are doing and how they are positioned while you are scouting. Spread set up always needs to reflect the real thing, and the only way to know that is by careful study of live birds.

3. The More Motion, the Better

I can’t emphasize motion in the spread enough. One method that has been lost over time is utilizing white kites to mimic geese working a field. Manufacturers made kites for light goose hunting, and they are still around today, though they’re intended for an afternoon at the park, not a day in the goose fields. Kites fell out of favor as easy-to-deploy and less wind-dependent motion decoys, like rotary tornado machines that run off a car battery, were developed. You need the right conditions, but they are still effective. Kites require a steady 10 mph wind, and very high winds are not kind to them.

James Shuler grew up in the heart of Texas goose country near El Campo. He guides duck hunts and bay fishing trips now, but we guided together for white geese years ago, and used kites every chance we could.

“Kites were a part of every goose guide’s arsenal then,” he said. “They really helped late in the season when geese had been hunted hard. The wind had to be right of course to use them. Around 10 to 15 mph was perfect. Geese can see them for miles and will fly over for a look. I can only imagine they would work well now that the birds haven’t seen them in a long time.”

Kites are fragile, so you must be careful with them if they are to last many hunts. A good way to transport them is in a homemade carrier. The plumbing section of a hardware store will have the supplies you need. Build two of them; they will hold three kites and string apiece. The best PVC pipe size is 4″ in 10-foot sections. Other supplies to purchase include: two 4″ caps, two 4″ male adapters, and two 4″ female adapters. PVC pipe cement, primer, and duct tape round out the materials list. Cut the pipe in half and glue a cap on one end and the male adapters on the other. Before attaching the female adapter to the male, cover the end of the female with tape. Use more tape on the inside to prevent kites from sticking.

During the spring conservation season snow goose boom there has been a sharp decline of fall light goose hunting across much of the country. It is still common in Canada, but electronic callers are allowed there from the start of the season, and birds get conditioned fast to the sounds from e-callers. You should learn to use a mouth call. Learning to call snow geese takes time and effort, but it’s not overly difficult. And you can’t use an e-caller on snows here in the U.S. during the fall, so if you want to hunt them during the regular season, you have to know how to operate a call.

Texas coast legend Jimmy Reel was one of the best guides to hunt the famous light goose grounds near Garwood and Eagle Lake. He and Clifton Tyler are widely recognized as the founders of the “Texas Rag” style of decoy. Jimmy’s real fame among Texas guides though was developing the snow goose sounds that they used to call birds in. He did that by pushing the reed down on the tone board of a popular Canada goose call. The shortened reed created a higher pitch. A raspy, two-note specklebelly sound could also be made on a call modified this way in addition to a sharp lesser Canada “bark.”

Snows have a sharp single note call that pierces the air. To recreate that sound, you must push air up from your diaphragm and force it out in a quick burst. Say the word “rock” while forcing air into the call. That short burst of concentrated air is a must for creating the right sound. As birds lock wings on final approach, keep after them by increasing the tempo to a fever pitch. Don’t quit calling until it’s time to shoot. This is very important; the lack of sound will alarm incoming geese. There is no way to overcall snow. The more racket in the spread the better. Mouth calling still works in the spring too, I’ve had success turning off the box and using the call. Just realize, you will need to build up your lung capacity to blow a snow call properly. It takes a lot of hot air running through the call to keep up with real birds.

Chuck Berry, founder of iconic Texas Hunting Products, was a guide’s best friend. We all used his windsocks across coastal Texas, and they worked. He always gave us a discount on his “rags” and since we all started with 1,000 every season that was much appreciated. The decoy design is simple, light, and easy to deploy in big numbers. Four hunters can carry 800 into a field easily and they will all fit into the back of a pickup bed in bags with a dog kennel, and room to spare.

The old windsock will still work in a world dominated by full-body decoys. In fact, my experiences the past two seasons, which have been difficult due to poor hatches, have still been good when I abandoned convention and returned to my roots. Full-bodies and shells were not working against adult geese that have seen year after year. Then I thought, these geese are old, but they haven’t seen decoys from 30 years ago. Still owning a few hundred rags tied on dowels, I tried them out and was pleasantly surprised when geese decoyed better. One important point, if there is no wind, these decoys look like what they are, a plastic sheet on a stick. That’s no good. Give them a 10 mph breeze and they come alive and are larger that today’s socks. Thankfully, Knutson’s Sporting Goods in Michigan still sells them new so give them a try this spring.