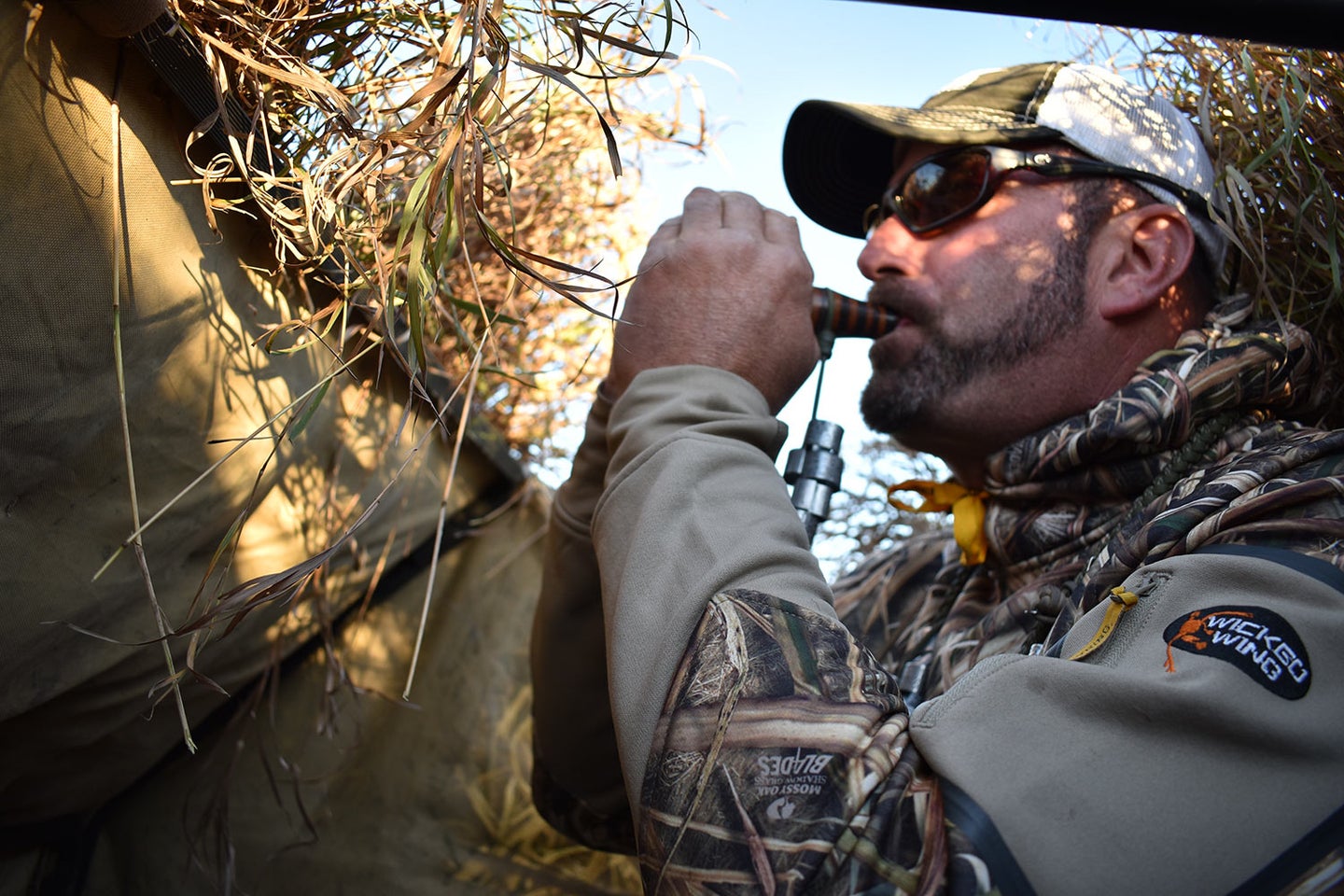 You’re not Fred Zink, but you can call early geese as smartly as he does. Joe Genzel
SHARE

As someone who grew up field hunting stubborn Canada geese in Illinois, I can’t think of a better feeling than when Sept. 1 hits. It’s the kick-off to resident honker season, when young, uneducated birds typically fly the same pattern every morning. The first few days are often easy pickings, a welcomed reprieve from a fall and winter of watching anti-social geese give us the middle finger as they fly over our decoy spread to the safety of the refuge. During the regular season, migrating honkers are some of the smartest quarry (and most difficult to kill) east of the Mississippi River. We are talking old birds, many of which are 5 to 15 years old. Imagine trying to kill a teenage buck or tom. It would be damn near impossible. That’s why the resident season is such a great time to be in the field: birds, old and young, are much more predictable.

Local Canadas are overpopulated just about any place you will hunt. They particularly love urban areas and the green spaces that are interwoven among big cities. And they will also roost on manmade ponds in the suburbs, feeding on the grassy banks and fattening themselves into near record-sized geese. On the fringes of these areas are where I like to target resident geese, but they are certainly huntable in rural locales as well. There’s just something a bit more satisfying (for me) to set up in a cut wheat field across the highway from a neighborhood pond and shoot 15-pound honkers right in the beak.

You don’t have to wake up at an unseemly hour, either, or set massive decoy rigs to get the job done (as long as you’re on the X or hunting water). You just need to scout hard, hide well, and keep a few tricks up your sleeve. Here’s how to target these susceptible early-season birds.

I love to scout early season, because it’s typically a simple endeavor. The newer neighborhoods north of town all have ponds and the local birds roost on the water 365 days a year because those ponds are aerated and stay open even on the coldest winter days. I just have to watch the pastures in August to see where the birds are feeding. If some of the agriculture fields get cut right outside city limits, that’s an added bonus, but a rare one. Resident geese patterns are pretty reliable in September, so if you can get on the X, there’s a good chance the birds are coming back to the same spot as long as you don’t do anything to screw it up, like throwing out too many decoys or not hiding well enough. If you can’t get access to the feed field, you have to get under the birds. No amount of flagging, calling, or decoys is going to pull those birds off a line they have been flying for weeks or even months, unless you’re a very good caller. Your only real chance is to peel a few juveniles, but they have to be flying over the top of you.

Also realize that these birds are incredibly lazy and will not fly far for a meal. As the season goes on and fields get cut closer to the roost, they are likely going to shortstop you, so be on the lookout for that. It still happens to me sometimes. I don’t hunt for a couple days and figure the birds are still feeding in the field I have permission on—then morning comes and all the birds go to a newly harvested field. I’ve actually seen local honkers swim out of a roost pond, walk across a two-lane road, and into a fresh cut field to feed. That’s an extreme circumstance, but these birds are going to expend the least amount of energy they possibly can, and you need to plan accordingly.

I will always take water over a field when hunting big geese because they are more comfortable landing on a pond than in the wheat stubble or a sod farm. Day loafs are an awesome place to intercept birds. They come off the roost, go to the feed, and then some of the birds will likely go back to the roost. But others will go to smaller water to drink and hangout for the rest of the day. These are good places to hunt because you are only targeting a small number of the locals, so you won’t be educating as many. If you find such a pond, four to eight decoys are likely enough. The first birds coming to the water either don’t see other geese (or very few) when they arrive from the feed each morning. You can also show up around sunrise, because the birds are not flying directly to the water. They have to go feed first, which means they will probably not get to you until 8 or 9 a.m.

Most corn and bean fields are not going to be cut this time of year, but you might find a harvested sweet corn field, which is one of the best options out there. A buddy of mine in Minnesota has a deal with a couple sweet corn farmers to leave some standing crop in the field through the end of the early season. It’s an awesome hide, because you can just sit on a five-gallon bucket among the stalks. Sometimes you can find standing corn next to a cut wheat field or sod farm and that’s an ideal location because it makes the hide so easy. If it’s not too wet, more fields will get cut as the season rambles along. And the birds will find those places, so you have to stay on them.

Typically, ponds on the outskirts of urban areas have mowed banks or little cover to hide in, but that shouldn’t be the case in rural areas unless the farmer is really meticulous. I’ve found A-frame blinds placed on the bank or in shallow water work great. You can buy one or build an A-frame for cheap with hog panels and steel stakes. Another good tool is the MoMarsh Invis-Man, which is a layout blind without a foot bag on telescoping legs. When brushed up, it just looks like a pile of grass, and you can also use it in just about any shallow-water hunting locale, public or private.

If there are some trees surrounding the lake, those make for an easy hide. Just look at the next day’s wind and make sure you sit in a place where it’s not blowing right in your face. I also know some guys that have hunted from a docked pontoon boat on a friend’s lake. The geese were used to landing near it, so it made a perfect blind. Don’t hesitate to find unconventional ways to get close to geese this time of year. Just make sure you are doing so legally.

You can use an A-frame in cut fields, too. Some folks will hunt out of them from the middle of the field (though I’ve never had much success with that on big geese). Most will find a hedgerow or treeline so the blind blends in better and doesn’t cast as much of a shadow. That’s the major issue with any field blind: The odd shadow it can create. A lot of hunters like to have the sun at their back so it blinds the birds’ vision, but that’s not a smart move if you are hunting a high-profile blind, because it creates a very distinct shadow in front of you, which will likely spook geese.

Layout blinds still work well if you hunt edges and fencerows, but they are a death sentence in the middle of a field unless it’s just you and a buddy you can trust to hold really still. Layouts worked great for a long time in the middle and still can in certain circumstances, but not for big geese. If the birds are landing out in the field and not along the edges, just lay on the ground, coverup with a ghillie blanket, and use your blind bag as a headrest. Also throw whatever chaff is left over from the harvest on top of the blanket to blend in better.

I’m a firm believer that less is more when it comes to decoys in the first days of the resident season. On small ponds, you don’t need more than a dozen floaters. You can also place some field full-body resters and feeders on the bank to simulate geese landing, hopping out on the grass to feed, and going to their bellies. That makes a realistic and comfortable setting for birds. For fields, try setting clusters of family groups. The birds are still young so they are with the parents, and you need to mimic that.

There’s no need to deploy an entire trailer-load of decoys this early in the year. As the season presses on and more fields open up, you can start running traffic on birds, and that’s when you can increase the footprint of your decoys. In fact, you will have to ramp up your spread in order to draw the attention of birds that are headed to a feed. When setting the spread, don’t forget to make it easy for the birds to land. Remember, many of these geese are young and can’t fly well. They will struggle to bank into a kill hole. Set up so they can fly in the straightest line possible and make it easy for birds to land right in the decoys.

You might be better than Fred Zink with a short-reed goose call (or you might just think you are), but resident season is not the time to show off your repertoire. What separates an accomplished caller like Zink is that he knows when to pull out the bag of tricks and when to keep it simple. Don’t show the birds everything you can do with a call on the first day of the season. Only do what you need to in order to get geese front and center. That’s mainly simple honks, clucks, and moans. Also, avoid going silent when geese are on approach. As birds cup their wings and put their feet down, make excited clucks. That’s what real geese do on the water almost every time birds in the air are circling.

“Going quiet is unnatural, and it alerts geese something is wrong,” Zink says.

Just remember, the more you show the geese, the more they learn. And you don’t want to do that if you’re looking to get multiple good hunts in during this short season.