5 Top Custom Shotshells That Are Better Than Steel

We spent all fall dropping ducks and geese with these high-performance loads. Here’s what we found 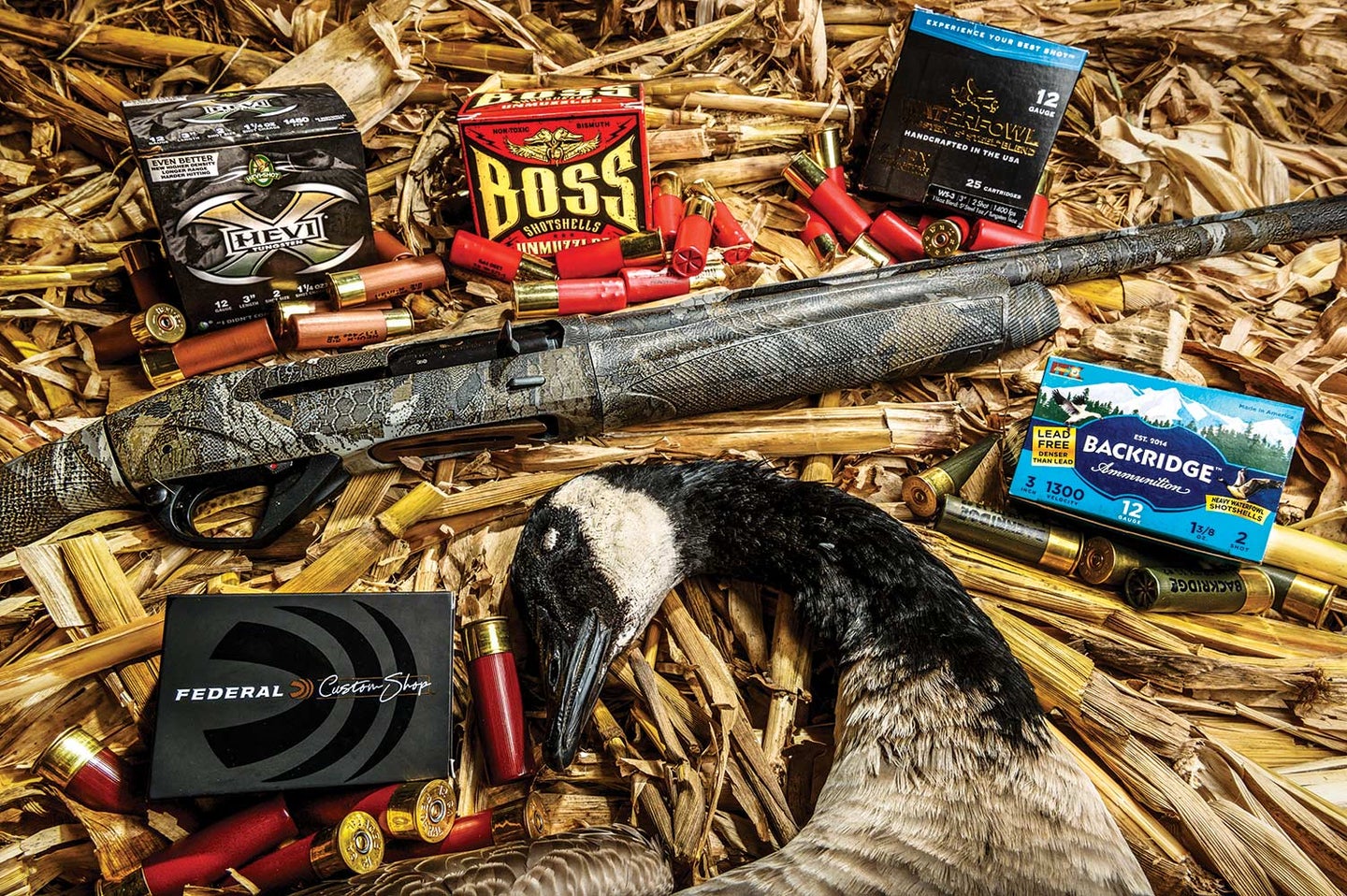 I popped out of my layout blind shooting, dropping the lead goose and then moving back to the second bird in the flock, which was now quartering away hard with the wind at his back. I dropped that goose too, beyond the edge of our decoy spread—not winged, but stone-cold dead.

“Just what the heck are you shooting?” my hunting partner asked.

Nope, not a 10-gauge. Not 3.5-inch BB. I was hunting with the deadliest goose load available: tungsten No. 7s. There’s a new crew of custom shotshell-makers who are pushing the trend in using smaller pellets made of heavier metals. The best thing about these little guys is they offer the exact type of load you’re looking for—whether it’s for your 10-gauge or .410. I rounded up five of the top contenders and piled up ducks and geese with them all fall. When the gun smoke settled, here’s what I found.

Technically, this isn’t a custom ammo-maker, since you can usually find it on box-store shelves, but it would be a mistake to exclude Hevi-Shot from this roundup because it’s one of the OGs in the better-than-steel game. This year, the company has upgraded its Hevi-X load, which is a tungsten blend, by increasing the amount of tungsten, and therefore increasing density. When I cut the shells open, I found the pellets were unevenly formed—some looked like candy Nerds, others were two pellets globbed together. This is likely why they scored on the lower end of the percentage of pellets on target during patterning.

This company made a splash in the waterfowl world in 2018 when it launched on Instagram as a direct-to-consumer brand making high-quality ammo out of Michigan. This year, Boss improved its loads by plating its bismuth pellets with about 1 mm of copper. (The company is in the process of patenting that plating method.) “The plating process made the pellets harder, so denser patterns, and we also saw better penetration in our ballistic gel testing,” says Brandon Cerecke, company founder and third-generation plater.

What I saw in field testing was premium performance—the No. 2s absolutely crushed geese, and the No. 5s were killer on ducks and pheasants—for a relatively affordable price. For waterfowlers looking for that sweet spot of “better than steel” pellets that also won’t break the bank, Boss shotshells can’t be beat. The other nice and economical feature about these shells is they seem to pattern the best out of a factory full choke. I shot 30-yard patterns with the #5s that had more than 95 percent of the pellets hit within a 30-inch circle. Use the money you would have spent on that aftermarket choke to buy more ammo.

You might recognize the Apex name from the turkey-hunting world—they’re the guys who started loading TSS for the masses in 2017. But the company actually got its start in waterfowling. The company founders watched their buddy, who was a handloader, fold a gadwall at 80-plus yards with a single shot of TSS. That afternoon, they planned their new business right in duck camp. Apex makes a straight TSS load (like the Federal Custom Shop, see below), but it also makes a mixed load of No. 2 steel (about 126 pellets) and No. 9 TSS (about 90 pellets) that is much more affordable.

The most impressive thing about this shell was the beautifully even patterns it printed at 50 yards. At close ranges, the steel really does the bird killing. But at longer ranges, the TSS fills in the holes of the pattern—and kills birds.

OK, let’s get the astronomical price of these loads out of the way first. Most waterfowlers are not going to spend $100 for a box of 10 shotgun shells. Federal knows this. But the company wanted to make the most effective waterfowl load on the planet, and it has done exactly that through its new Custom Shop in Anoka, Minnesota, which loads rifle and shotgun rounds that you can’t find on store shelves. Here’s how it works. First, you jump on the shop’s website and order the rounds you want—it has some oddball rounds available, such as 6.5-284 Norma tipped with a 130-grain Edge TLR bullet, and 28-gauge TSS, but it’s planning to add more options in the coming year. Then the Custom Shop loaders get to work, assembling the ammo by hand—I watched their lead ballistician tap home wads with a wooden mallet. About two weeks later, your boxes of ammo show up, each one initialed buy the loader who made them.

As for the shells themselves, TSS has a density of 18g/cc (lead is 11g/cc). That super-high density allows you to use much smaller pellets. Obviously, this means more pellets in each shell (in this case, 235), but equally important, the smaller surface area of each pellet means they retain velocity better downrange and penetrate better through a bird. In a 12-gauge, TSS is ridiculously effective, but it’s also giving subgauge fans an opportunity to turn their 28s and .410s into bona fide goose slayers.

Backridge is a little vague about the makeup of its proprietary ITX13, but the military-veteran-run company out of Clarksville, Tennessee, did tell me it’s a blend of tungsten and iron that’s 16 percent denser than lead—and it’s softer than steel. The pellets were perfectly formed little balls of destruction with a bellyband around the middle (similar to what you see in Federal’s Black Cloud ammunition). The cool thing about Backridge is the company is focusing on more obscure loads. Its 10-gauge No. 2 is a hot seller for shooters looking to pound geese at long range, but Blackridge expects its new .410 loads to be just as popular for waterfowlers who want to take birds up close.

Read Next: What Makes Specialized Waterfowl Shotguns So Special

I hunted with all the loads, but also patterned them at 50 yards through a Benelli SBE3, with a 28-inch barrel and Patternmaster Classic Long Range choke, counting the number of hits inside a 30-inch circle. Muzzle-velocity testing was done at Federal’s factory through a coil of inductance sensors with a 30-inch test barrel under SAAMI specifications.