Why do some does grow antlers? Those answers and some of the biggest antlered does every taken 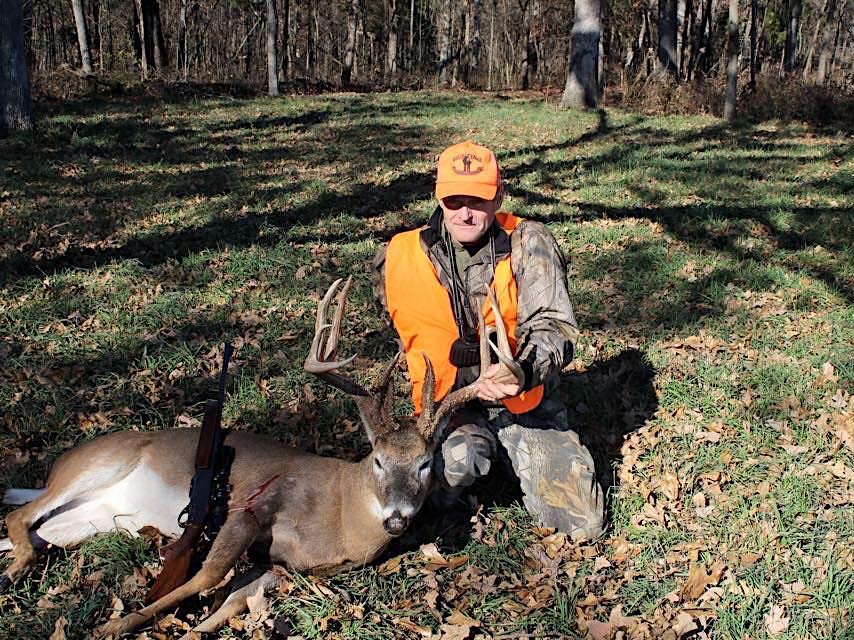 Like albino deer, melanistic whitetails, and the ever-elusive world-record, antlered does are among the rarities that hunters dream of, but generally never see. And if they do, most don’t even realize it. This is the stuff of legends, really, and there are more that biologists who don’t know about the phenomenon, than those who do.

Does that produce enough testosterone can produce antlers. Most of the time, these are very small, and due to similar body characteristics, might even resemble 1 ½- to 2 ½-year-old bucks with small 2- to 8-point racks. Each case is dictated by hormonal imbalances and reproductive abnormalities.

“It’s testosterone based,” says biologist Grant Woods of Growing Deer TV. “All males and females have testosterone and estrogen. But why does one doe have a larger input of testosterone — or smaller input of estrogen — than most females?”

All crowned queens aren’t true antlered does, though. Some that appear might actually be hermaphrodites, meaning the animal has both ovaries and testes, which is a genetic defect. In conjunction, it’s also possible to express one or both external organs. These deer can have velvet antlers year ‘round, or produce normal antlers that carry out the typical growing, velvet shedding, and casting processes. According to most researchers, hermaphrodites are incapable of reproducing.

Next is pseudo-hermaphrodites. Some refer to these deer as cryptorchid males, where they have reproductive organs that aren’t entirely correct. They have either male or female internal organs (ovaries or testes), but express the opposite gender’s external organ. Generally, this results in a deer that retains velvet antlers throughout the year and might never cast them during the antler shedding window. Most scientists believe this to be a genetic mutation.

Then there are true antlered does, which is very rare. Very few express such traits. These have enough testosterone to produce antlers, but still have anatomically correct reproductive organs. Those with highly functioning ovaries generally express minimal antler development, which oftentimes remain in velvet, and do not shed.

All antlered “does” don’t fall into these three categories, though. They are merely the primary categories. There are even subcategories, or combinations, which can get very confusing and weedy.

“The lines between these [three types] aren’t as clear as the textbook examples themselves,” Woods says. “You can also have a doe that is a true hermaphrodite, but then injures its scrotum (just like a buck) and then stays in velvet (instead of shedding). So, there is a hodgepodge of possibilities, and not just the tree textbook cases.”

Regardless, each year, we hear reports of hunters who’ve bagged these antlered does. Although very rare, it certainly happens. The stories of these three deer certainly seem to be true antlered does, all of which shed their velvet and sported polished racks.

A lifelong deer hunter, Chuck Rorie wanted to bag a big Kansas buck. In 2014, he received permission to hunt a friend’s property in Sedgwick County, Kansas. On December 3 — the opening day of gun season — he carried his Remington .270 afield in hopes of killing a good one.

It was cold, cloudy and dreary. He sat in a box blind in the middle of a field. A line of timber stretched out in front of him. Wheat fields sprawled out in each direction.

Opening morning came and went with few deer sightings. The afternoon hunt arrived, and deer moved in and out of view. A few nice deer stepped into the open, but they weren’t of interest.

“I was watching a couple other bucks chasing does in the field,” Rorie says. “Then, a deer walked up from behind them, not paying them any attention. The brow tines caught my attention.”

Read Next: The 22-Point, World-Record Doe

He didn’t recognize the deer. The landowner hadn’t seen it, nor captured trail camera photos of it. The rack was impressive, though.

After a few minutes, Rorie readied his gun, settled the crosshairs, and took the 75-yard shot. The deer ran 60 yards and tipped over.

“We did not realize what we had until we were cleaning the deer,” says Rorie. “I noticed things, and I asked my dad to verify. We called the local game warden, who came out the next day along with the local TV station.”

Needless to say, Rorie and his friend, Anthony Younger, had an eventful hunt. It isn’t every day something like this happens.

“We couldn’t believe it,” Rorie says. “No one could believe it. People said I had to be the luckiest guy. The deer means a lot because of the memories made.

Even as a doe, it scored 117 inches on the Boone & Crockett scale.

Another member of the big, antlered-doe club, Curtis Russell joined ranks with the relatively small crowd in 2015. He hunts in Christian County, Missouri, and he’d been hunting a specific deer for three years. He estimated it to be 5 or 6 years old.

On November 21, Russell picked up his trusty .30/06 and headed to the farm yet again. It was a typical November day. The wind was out of the northwest.

Russell was set up overlooking some pasture ground and a thick section of woods. He watched deer filter in and out of view. Then, the gnarly non-typical walked into the open. It immediately went on the offensive toward a small buck. It brandished its headgear at the smaller deer.

“Initially, I debated on whether or not it was the deer I was after,” Russell says. “However, once I looked through the scope and saw the rack, all thoughts of a pass were gone.”

The big doe was out of range, though. Russell made an aggressive call, and belly crawled to within 150 yards. It proved the right decision. Once in position, he flicked off the safety, and pulled the trigger. It dropped in its tracks.

“After I shot her, there was a handful of deer that didn’t want to leave the field,” says Russell. “It was weird. But I was very excited to finally get the deer I’d hunted for three years.”

His excitement wasn’t limited to the size of the rack. When he started field dressing the deer, what he noticed blew him away.

“I was hunting alone, so I called my son,” says Russell. “Everyone was amazed when I brought it to town. Once I took it to my taxidermist, things really blew up. One picture of it got more than 25,000 likes on Facebook alone, and one of those was Johnny Morris of Bass Pro.”

The giant retailer now has possession of the deer, and it is in the Wonders of Wildlife Museum. An official score was not provided.

“Hunting is a total lifestyle for me,” Russell says. “I’m always outdoors when I can be hunting or fishing, and I’ve tried to pass this love to my three kids. The values they learn will stay with them a lifetime.”

Central Missouri deer hunter Doug Laird is a passionate deer hunter, and has been for a long time. In 2014, he accomplished something no other hunter has ever done — tag an antlered doe that scores over 200 inches.

He’d been hunting the area for five or six years, but he and his friend had no idea she was there. Then, one day during the modern gun season, he slung his Remington .243 over the shoulder and walked to one of his favorite treestand locations. It’s an area that’s hilly with ravines.

The conditions were ideal for a solid day afield. It was a little windy with cloudy skies and temperatures in the 40s.

Shortly after daylight, the antlered doe came through a small opening, and a nice 8-point buck chased her around in the timber. Even more interesting? A fawn followed along behind her as well.

“We had five cameras set out on this farm, but had no pictures of her,” says Laird. “But we had pictures of the 8-pointer that was chasing her. She came down off the hill, but I had no idea that she was a doe. They went through this gate, and I didn’t get on her in time. The 8-point was 60 yards behind her, and he made it to the gate and stopped broadside. I could have shot him, and even had the scope on him, but he wasn’t quite big enough.”

That afternoon, he switched to a different spot. Hunting from a nice ladder stand, an open field provided a stellar view in front of him. Draws dip down to the right and left. A large hill and cedar thicket towered to the rear.

“I knew about where she was bedded down,” says Laird. “It’s a really thick cedar patch. That area is about a 15-acre patch that we stay out of. We don’t allow any scent in there or walk through it. It’s a safe haven for deer.”

The wind picked up, and temperatures dropped, but deer were moving anyway, including the king of crowned queens. “She came out to the right in that draw,” Laird says. “There’s a ditch, and then a field on the other side of it. She came down the edge.”

Sure enough, right before dark, the antlered doe came out along the draw to the right. Both the fawn and the 8-pointer trailing behind her. The buck was even smelling the ground and tracking her.

Laird finally got his chance. She stopped broadside, and he took the 65-yard shot. The blast echoed throughout the hills. She bolted and dove off into a ditch.

“I couldn’t tell if I hit her or not,” Laird says. “It got dark, and we thought we’d give her some time. We waited until the next morning, but I was excited when we found her. I thought it was the biggest buck I’d ever shot. We had no idea it was a doe.”

They loaded her into the truck and drove to the shop to field dress her. Upon arrival, his friend noticed something wasn’t quite right. “Hold on,” he said. “This thing is a doe. It’s missing some stuff.”

“I couldn’t believe it,” Laird says. “She had milk in her udder. That’s when it dawned on me that it was her little one that was with her, and the 8-point was wanting to breed her. I didn’t know it at first, but that’s what it ended up being.”

Read Next: 30-Point Illinois Deer is a Doe

Interestingly, his friend who owns the farm, Alan, shot a 7-point doe on the same place six years before he got this one.

“It’s been a crazy experience,” Laird says. “I’ve sure enjoyed it. God blessed me with it. That’s for sure.”

All things considered, Laird’s is the most interesting not only due to its great size but also because it seemed to have a biological fawn. This is rare for most antlered does, but especially those with enough testosterone to grow such big head gear, and then to shed velvet.

“In that case, there was certainly a testosterone pathway that allowed calcium to mobilize, and the other things that trickle down from higher testosterone,” says Woods. “But, apparently, there was enough estrogen production also that it triggered functions associated with a normal estrogen cycle. It’s not just having estrogen. It’s having estrogen in a certain cycle that causes reproduction status to be sufficient to get pregnant and carry that fawn to full term. That’s obviously a one in a million deer. It’s very rare, but certainly a possibility. If it was happening very much in America, we’d learn more about it.”