The 8 Weirdest Whitetails You’ve Ever Seen

Five-legged does, vampire bucks, Bullwinkle deer—here’s our rogues gallery of some of the freakiest whitetails in the wild 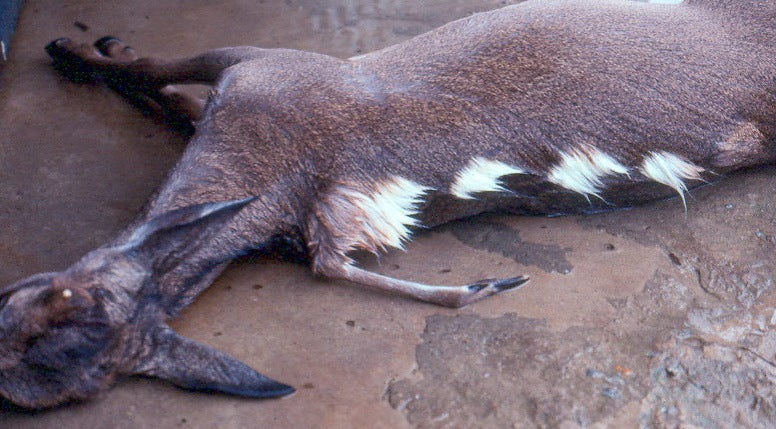 Have you ever seen a buck with a full set of velvet-rimmed antlers—in December? How about a black whitetail, or a buck with protruding canine teeth? Here are eight freak-of-nature deer that are so odd, piebalds might seem commonplace by comparison.

This is true, I swear, though you might have a better shot of hitting a $400 million Powerball than ever seeing this animal alive in the wild. Just imagine for a moment how much you might freak out if you ever spotted a deer with a fifth leg jutting out of its backbone near the back of its neck! Well, it happens.

According to the Quality Deer Management Association (QDMA), it is called the “parasitic twin” phenomenon. Twin fawns begin to grow inside a doe, but the embryos do not completely separate, and one of them stops developing normally. The somewhat macabre extra leg is the remnant of the twin fawn that didn’t fully mature. Most of the misplaced fifth legs that have been documented are short and small, with tiny hooves attached. That fifth leg is most often located on the deer’s shoulder or back.

Parasitic twins have been documented in many animal species, and are surely the rarest of the rare whitetail oddity. 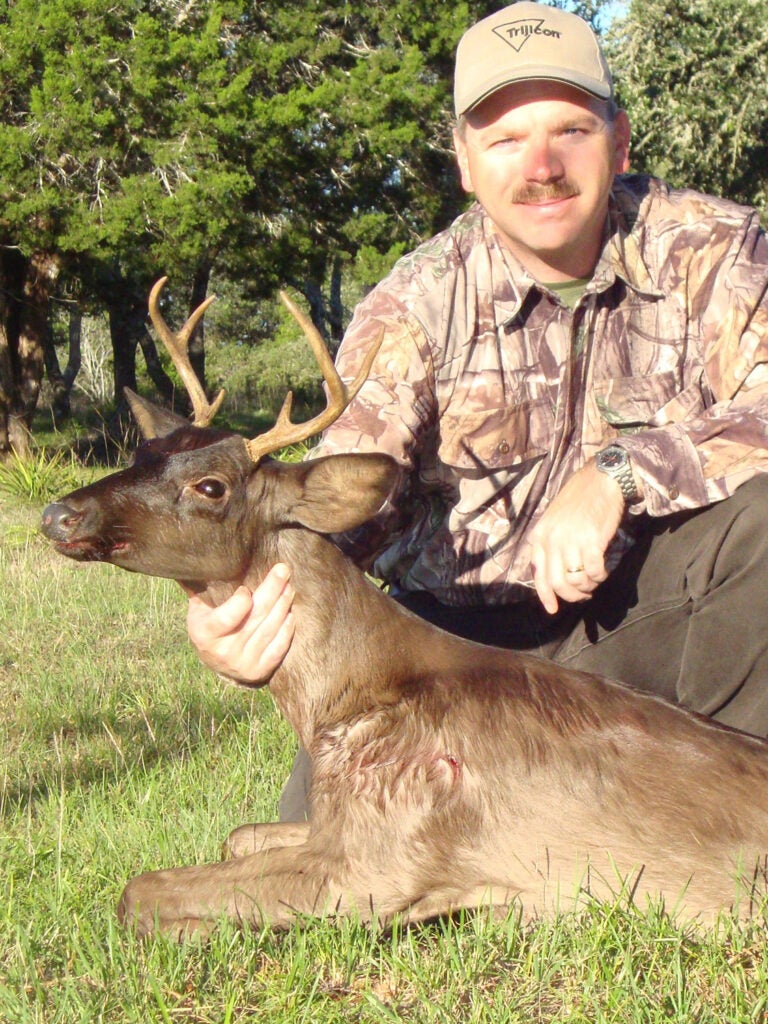 One day down in the Texas Hill Country, a buck stepped out of the brush in front of my buddy Eddie Stevenson. He did a double take—not because of its rack, but rather its color. The deer was mahogany-colored all over, with an even darker head and face. Eddie shot the buck, and the one-in-a-million mount now hangs on his wall.

You have probably heard of albino deer and their kin the piebald (a brown deer splotched with white, much like a pinto pony). Biologists seem to agree that less than 2% of all whitetails born will exhibit those white traits. However, black deer are less common, the rarest of the rare. The first-ever was documented by a biologist in 1929, and although tens of millions of whitetails have been harvested since then, only a handful of black deer have been reported.

The dark-colored hide of black deer is caused by a genetic mutation that causes their bodies to produce too much of the pigment melanin. Melanistic deer are not always solid black—there are gray to mahogany to walnut color phases, with some white on the belly and tail.

Unlike piebalds, which often have deformities such as curved spines and partially stunted legs, none of the research conducted to date suggests that melanistic bucks have inferior body or antler traits. They appear perfectly normal, save for their color.

Interestingly, the Edwards Plateau region of Texas is ground zero for melanistic deer. More black deer have been seen and harvested in the Hill Country than any other place in North America, though researchers can’t say exactly why that is. The odd black deer has popped up in Pennsylvania, Oklahoma, and a few other places in the last 20 years. The most recent sighting, a jet-black doe, was spotted and photographed earlier this summer in Northern Michigan. 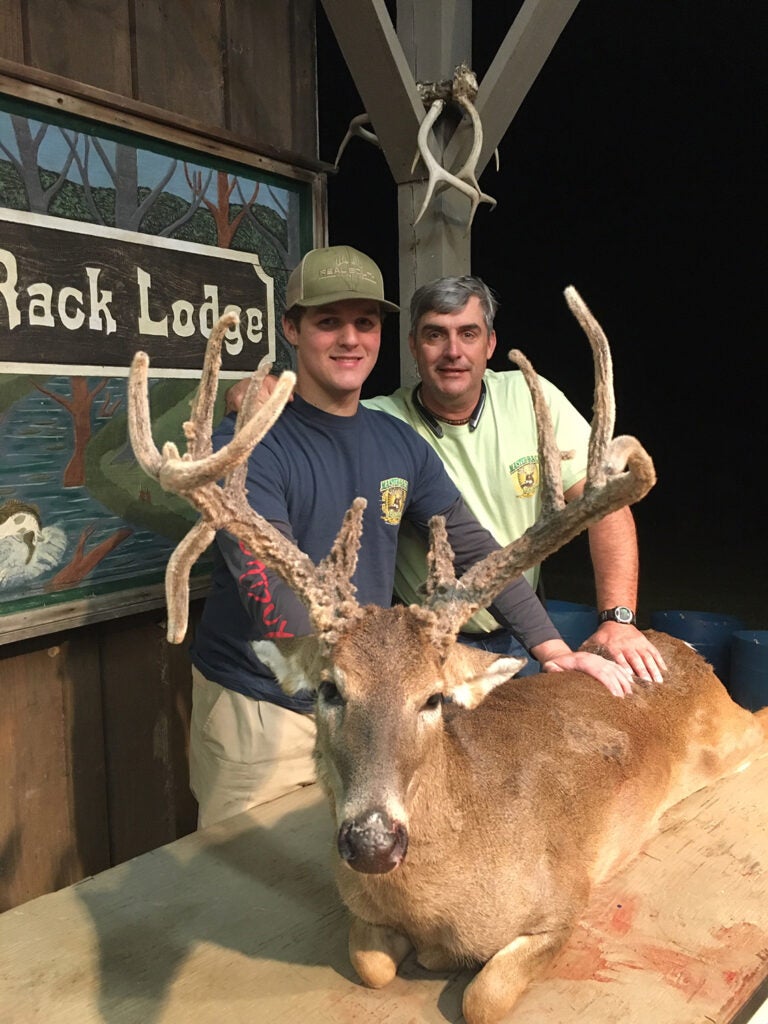 A stag buck in full velvet.

Commonly called a “stag,” this oddball deer retains antler velvet throughout the year due to low testosterone levels.

Biologists refer to this condition as cryptorchidism, and it’s rare. It can result from an injury or birth defect that prevents a buck’s testicles from descending properly. Cryptorchidism can occur in both whitetails and mule deer. Regardless of species, stag bucks are different. They don’t engage in the seasonal rituals of normal bucks, such as rubbing, scraping, or sparring. Lacking the chemical stimulation to express dominance, their necks do not swell, and they are essentially stuck in neutral in the reproductive sense. Some older stags amass large, funky blobs on their heads and become known as “cactus bucks.” 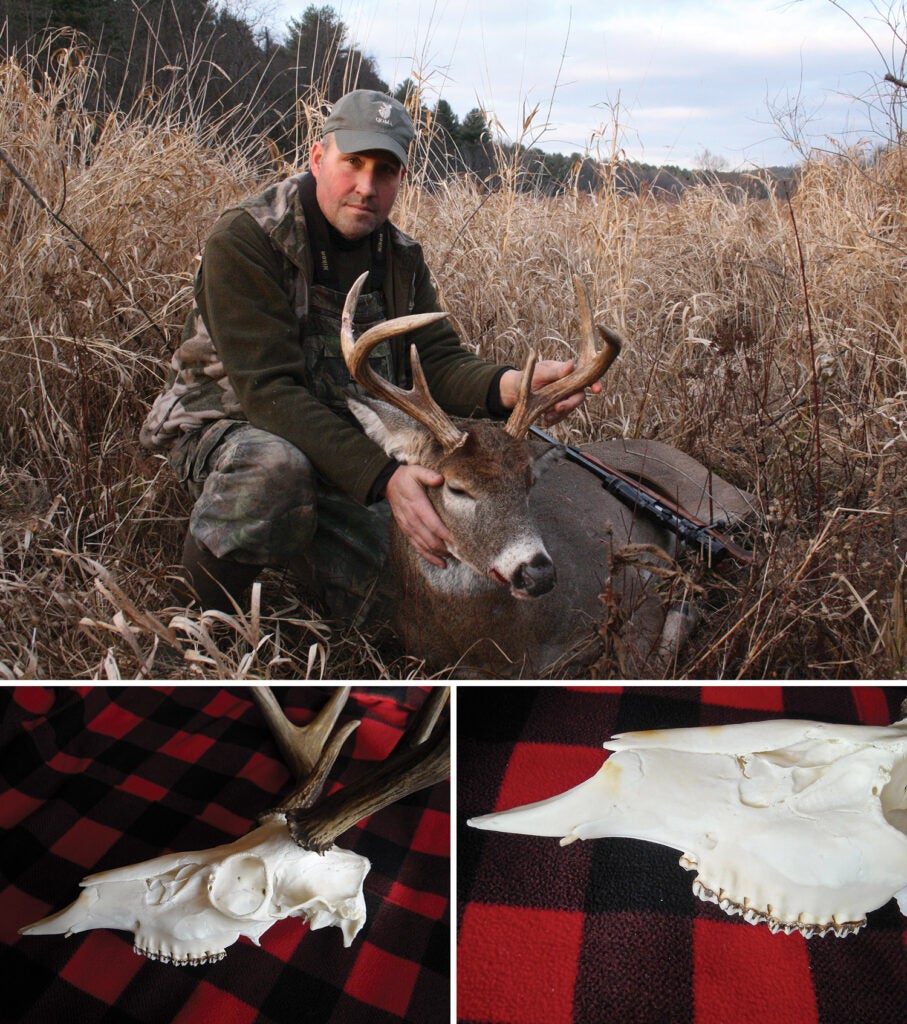 One time down in South Texas, my buddy Sarge, a wildlife biologist at the ranch I was hunting, stuck a deer skull in my face and said, “Notice anything?”

I studied it and cocked my head…

The tiny, peg-like upper canines were easy to miss. In more than 30 years of hunting and skinning deer across North America, this was the first fanged buck I’d seen.

Some 7 million years ago, dating back to the Miocene Epoch, ancestors of our whitetails had long, curved, sharp canines. While lower canines are present in all whitetails today, upper ones are uncommon. Paleontologists say the small deer-like animals used the fangs, or tusks, for survival. Over time, whitetails evolved antlers for defense, and the upper canine teeth regressed.

Brian Murphy, a biologist and CEO of the Quality Deer Management Association (QDMA), says, “Upper canines are a rare, but documented phenomenon and researchers believe it is an evolutionary throwback to the ancestral form of the whitetail which occasionally surfaces today. While the exact prevalence of upper canines in whitetails is not known, it is believed to be well below one percent.”

Fangs are not only rare but almost always overlooked.

Should a buck have fangs today, they would be only ½ to ¾ of an inch long, and most of them would not even break the deer’s gumline. Most fangs are spotted by taxidermists that cape bucks.

One more thing, and it’s fascinating.

Look up at a shoulder-mounted whitetail on your wall and focus on the small, black patches on either side of the lower jaw. These patches are positioned precisely where the fangs of an ancestral deer would have stuck out from the upper jaw. Valerius Geist, renowned mammologist and author of Deer of the World: Their Evolution, Behavior, and Ecology, theorizes that the black patches may have been there to accentuate the white of the long canines in prehistoric deer. The fangs evolved away, but the patches remain. 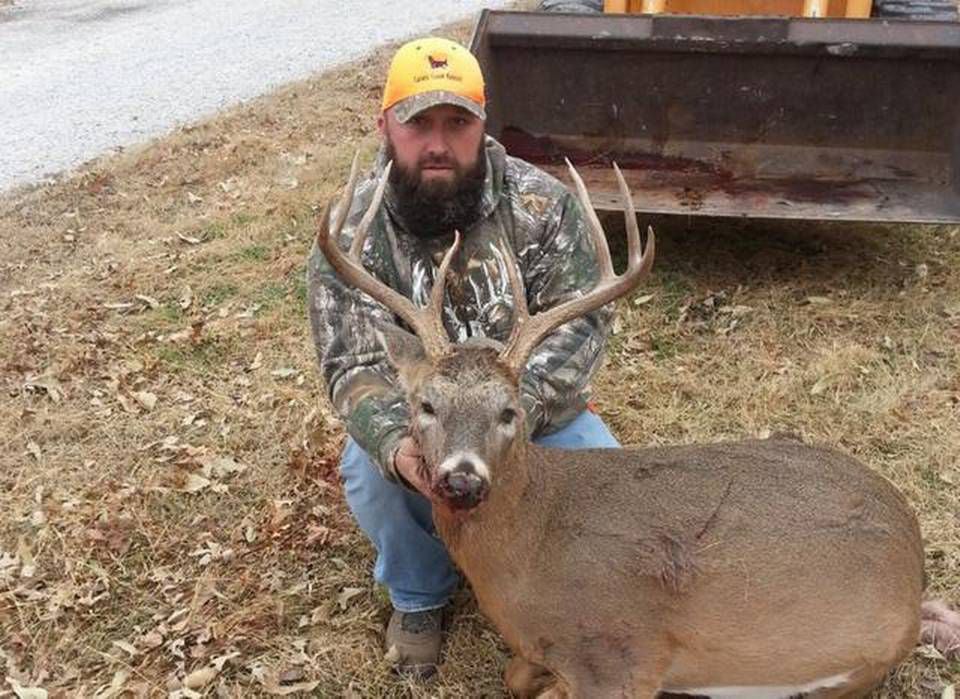 Chuck Rorie of Kansas with a huge antlered doe.

A few years ago, Virginia hunter Ben Yates went out and shot a nice 8-pointer. Ben and his buddy didn’t mess with gutting the deer and simply loaded it in his truck for the drive to a nearby check station. A biologist doing research at the checkpoint took some notes, lifted the 8-pointer’s hind legs, and said, “Uh, come take a look.”

Ben peeked under the deer, and it took him a minute to register. He’d shot a doe with a nice rack!

According to the Virginia Department of Game and Inland Fisheries, there are two types of antlered whitetail does. The first is a female with velvet-covered antlers. This animal usually has a normal female reproductive tract and is capable of bearing fawns.

The second type is a female deer with polished antlers, like the one Ben shot. This animal is actually a male “pseudo-hermaphrodite.” It has the external genitalia of a female but has male sex organs internally.

In either case, an antlered doe is extremely rare. Only one or two if any are killed by hunters in Virginia or any other state each season. 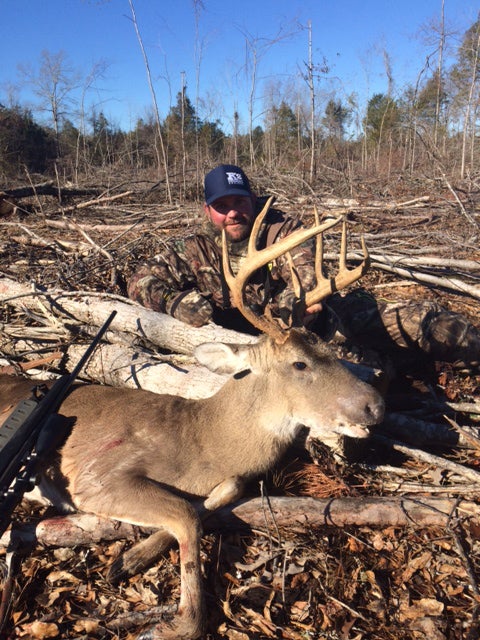 About 15 years ago, an Alabama hunter shot the first documented “Bullwinkle Deer.”

When pictures of the buck with the large, swollen, moose-like nose hit the Web, it caused quite the stir. In the next few years, a handful of other big-nosed does and bucks from Michigan to Florida to Texas (and a couple more from Alabama) showed up, and scientists took to studying them.

The affliction was and remains so mysterious and rare that experts don’t have a technical name for it yet. But the commonly used moniker, “Bullwinkle Disease,” fits. After more than a decade of studying tissue and blood samples from the few big-nosed deer that have been tested, scientists believe the swollen muzzles result from chronic inflammation of the nose, mouth, and upper lip. All the cases studied by researchers have shown similar colonies of bacteria in the inflamed tissues.

But there are still many unknowns. “It’s not like anything we’ve seen in deer before,” says Kevin Keel, associate professor at the University of California Davis school of veterinary medicine and the nation’s leading expert on Bullwinkle deer. “This is an interesting disease because we’re not sure if it’s new. It might be something that’s always occurred in deer, but at such a low prevalence we just didn’t know about it.”

The Southeastern Cooperative Wildlife Disease Study (SCWDS) at the University of Georgia, which has also researched this malady, notes that Bullwinkle Disease has been known to exist only since 2005. No cases appear in 50 years of SCWDS files prior. Scientists are unsure if this is because the disease has only been around for 14 years, or, a sign of the times, because hunters can now share photos of big-nosed deer kills on social media.

Teaching moment: In the very unlikely event that you or a friend shoot a Bullwinkle, do not eat the meat. Scientists say the infection could mean that bacteria are present in the blood and muscle or a secondary infection could have developed, making the meat unfit for consumption. 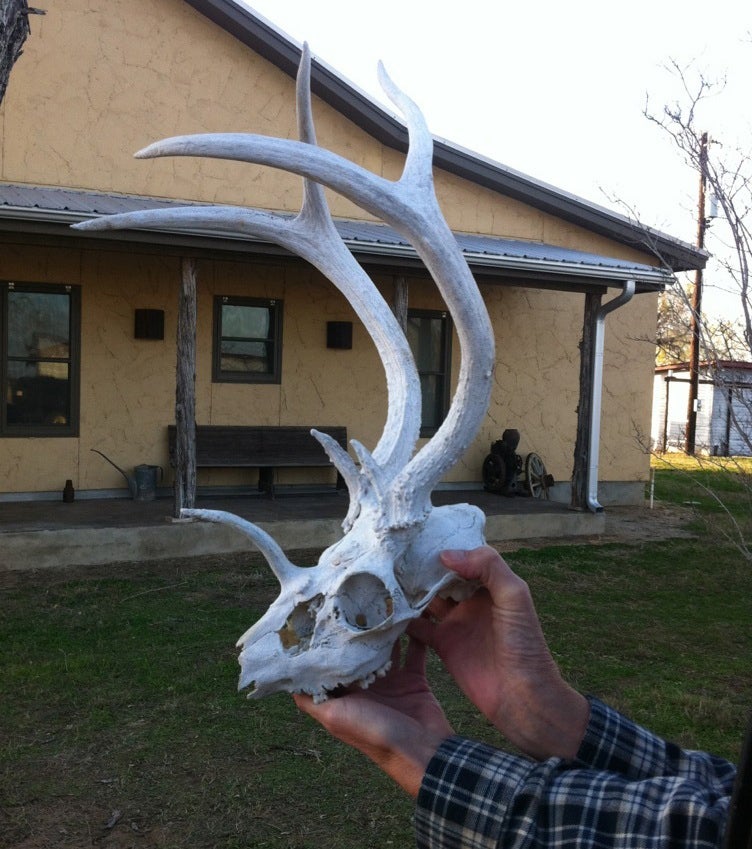 Every season hunters across the country shoot a few unicorns—bucks with third beams or tines jutting out of their foreheads or upper nose. The third antler is often only a few inches long, but larger and even multi-tined extra beams have been documented.

“This is caused by trauma to the frontal bone of the skull, such as a tine puncture from another buck,” says Mickey Hellickson, a noted whitetail biologist from Texas. “The entire region of a buck’s skull is capable of growing antler, and if an area of the frontal bone is injured, the trauma may cause a third antler to grow from the injury.”

Stranger yet, Hellickson says that researchers have experimentally caused antlers to grow from the frontal bone of a deer’s skull by grafting antler tissue to it. “Amazingly, the researchers were also able to induce antler growth in odd places, such as legs, hips, and even the ears of deer,” he says.

Will you ever see or shoot a unicorn? Probably not. Hellickson says that in his many research projects and surveys on some of the largest ranches in Texas, his teams have captured more than 5,000 wild antlered bucks, but not a single unicorn. 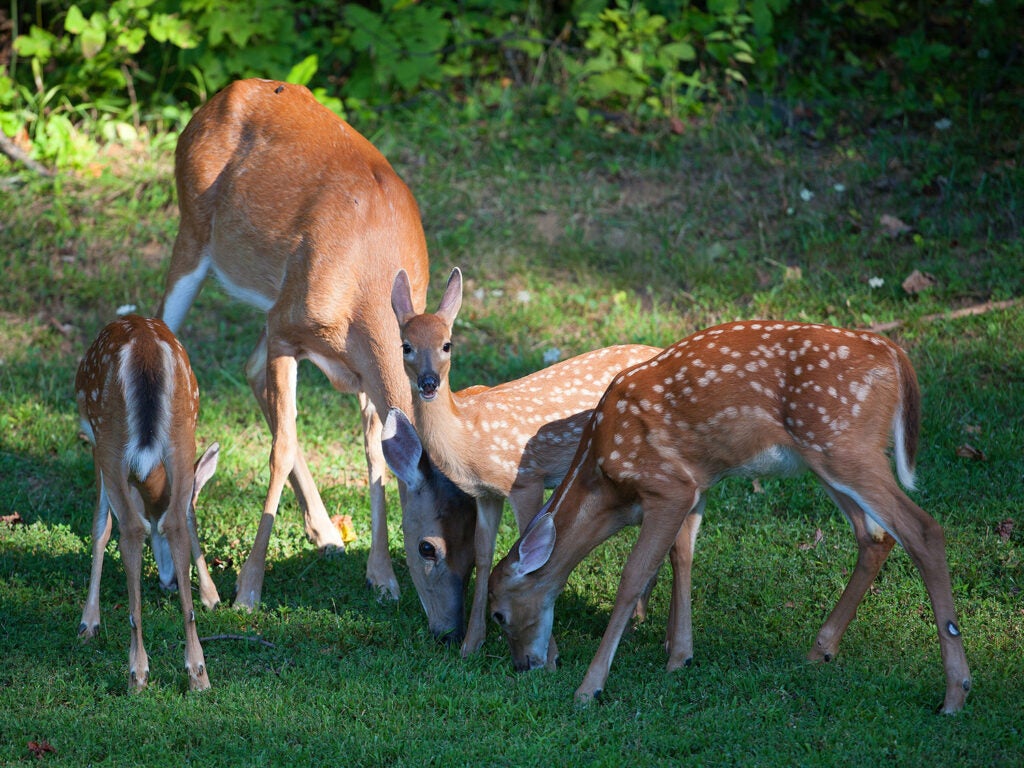 These three fawns may have had three different fathers.

For decades hunters and biologists believed that during the rut the thick-bodied dominant bucks bred most if not all the does.

It’s time to blow that old myth out of the water.

Recent research of captive deer in Oklahoma documented that all age classes of bucks breed does, regardless of the herd’s age structure. In fact, yearling and 2-½-year-old bucks sired a third of the fawns in the study, even though a third of the bucks in the enclosure were 3½ years of age or older.

The Oklahoma study also revealed more new information. In their project, multiple paternity in fawns occurred about 25 percent of the time. One in four sets of twins or triplets had two different fathers.

That percentage could be higher. A Texas A&M-Kingsville study recently found that 16 of 23 sets of twins, or an astounding 70 percent, had two different sires, typically one mature buck and another buck 2½ years or younger. Researchers suggest the younger bucks are opportunistic little devils, sneaking in to breed a doe just before or after a mature buck does.

It gets even better. Scientists at Auburn University recently reported 3 different buck sires for one set of triplets.