Four turkey experts weigh-in on which of the major subspecies is the wariest of all. 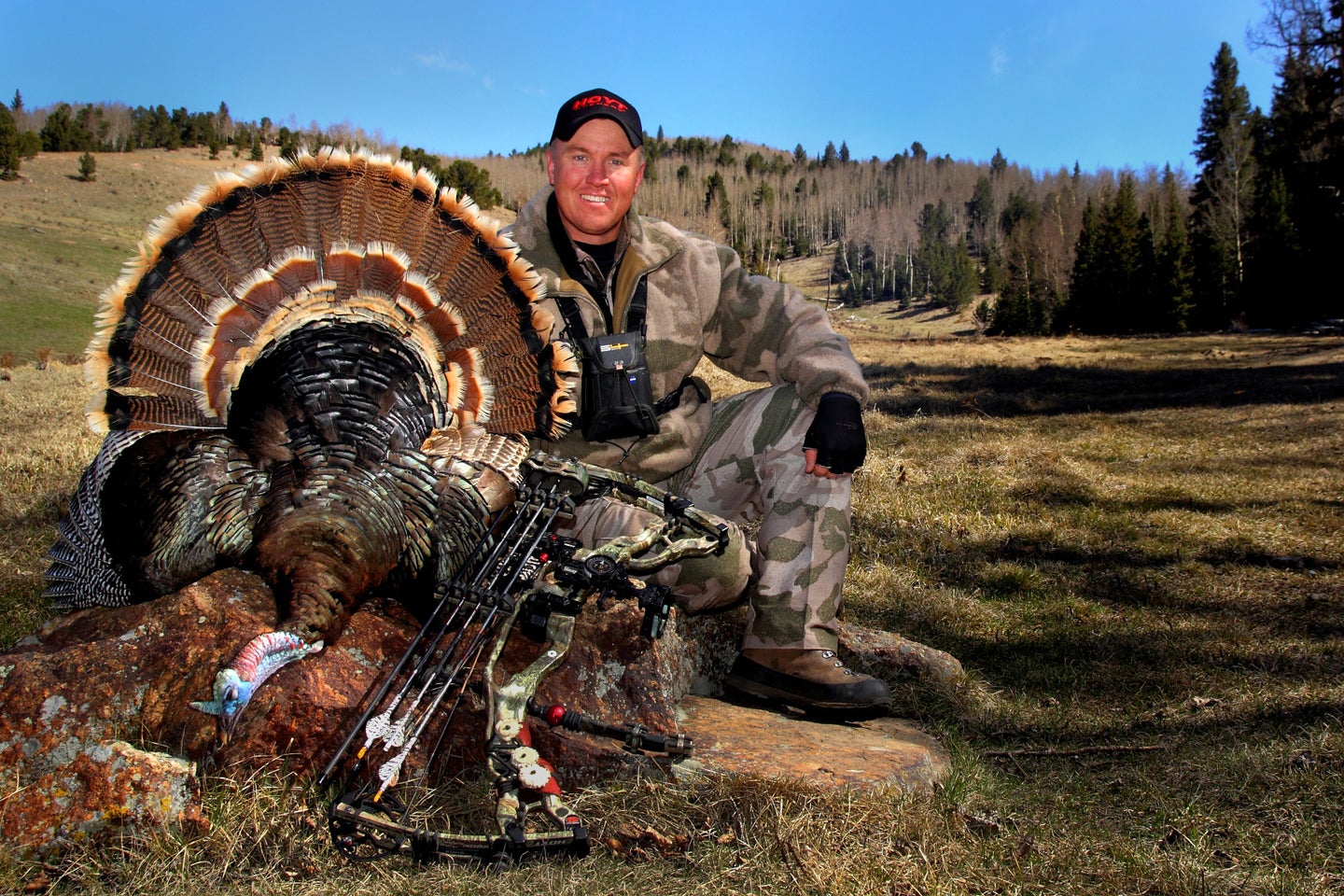 After spending a few days scouting, Danny Farris located this lone tom at just a tick above 10,000 feet in the Colorado Rockies. Jace Bauserman
SHARE

For the past 20 years, I’ve spent my springs chasing gobbles. I can’t get enough of them, and my obsession has taken me from the crisp Colorado mountains to the swamps of southern Florida.

Outside of getting the opportunity to match wits with different birds in different terrains, it’s the camaraderie of turkey hunting I cherish — time spent with like-minded individuals telling tales of adventures past and those yet to come. Most of these conversations, at some point, typically shift to which of the four major subspecies is the hardest to hunt. Yes, I realize I just opened a can of worms.

I reached out to four turkey gurus I’ve hunted with over the years. Each is passionate, and each has chased multiple subspecies of birds. Of course, each has his own opinion on what bird is the most difficult to tackle.

Where They Live: The mountainous regions of the West are considered home for what many consider to be the handsomest turkey of all.

What Makes Them Hard: Danny Farris, owner of Ultimate Predator Gear, has been chasing mountain Merriam’s for decades and firmly believes that harvesting a pure mountain Merriam is one of the hardest things to accomplish in the turkey world.

“Merriam’s are nomadic, opportunist feeders,” says Farris. “They wander great distances and often don’t roost in the same area. Just finding a bird in the vast terrain of the West is half the battle. I have lots of friends in the eastern part of the U.S., and they seem to think the Eastern subspecies is an Ivy-League educated bird and our Merriam’s just come in on a string looking to die. Nothing could be further from the truth.”

Farris notes that as the turkey rut progresses, Merriam’s gobblers often cruise mountainous terrain alone, which makes them all the more wary. Lone birds develop keen senses to avoid predators, and because they’re solo, are often reluctant to come running to a full-strut decoy.

“Solo mountain birds are chickens,” says Farris. “They seem very reluctant to commit to a full-strut decoy. When hunting mountain birds, I rarely use a full-strut tom. Decoys are great because the open terrain allows birds to see the fakes, but stay with a jake-and-hen combo.”

What Makes Them Easy: Farris adds that the mountain Merriam gets labeled as a “dumb” turkey because of how far birds are sometimes willing to come to a call.

“Think about it. A lone tom may have walked half-a-day without seeing or hearing a hen. You may have to do the same just to find one. When they hear some sexy hen talk, they are willing to come a long way to check it out. These birds are used to walking. They don’t find a hen around every pine tree. If you get a bird to fire, you’re in the chips. When walking ridges and covering terrain, don’t be afraid to get loud. An aluminum pot-and-peg or a trusty box call is a great tool for tickling distant ears.”

Where They Live: The plains and desert regions of the western United States as well as the Pacific Northwest and Mexico.

What Makes Them Hard: Mike Stroff has guided more turkey hunters to Rio Grande nirvana than anyone I know and simply doesn’t buy the misconception about how “easy” they are to kill.

“I grew up in North Carolina, and to this day hunt Easterns most every year,” says Stroff. “And I can screw up on Rios just as easily as I can screw up on Easterns. The biggest difference is that when I mess up on a Rio, I can go around the corner and find another one. When I screw up an Eastern, that may be my bird for the day. Rios, where I hunt in Texas, typically have successful hatches, and our population is big. This is the case in most areas Rio Grande birds live. I don’t believe an Eastern or an Osceola is any smarter than a Rio, it’s just a population thing.”

Additionally, Rios are especially roost sensitive and it’s easy to blow a good Rio hunt by trying to set up too close. Hunters come to Rio areas and find large numbers of hard-gobbling birds and freak out. More birds mean more eyes, and if you blow out a roost, you quickly reduce your chances of a successful harvest.

“Let the birds roost,” says Stroff. “You can ruin something that is really good in a hurry by hunting too close. If left unbothered, birds will roost in the same area night after night. Don’t pressure their home in the morning, and don’t disturb the birds as they head back to sleep for the evening.”

What Makes Them Easy: Unpressured Rio’s can be very predictable. If you stay off the roost and hunt smart, you have a good chance of calling a bird close.

“Study them,” says Stroff. “See where they go once they fly down and piece together what their day looks like. They will move to food, water, and strut zones. You need to know where the groceries and refreshment stands are. Also, because there are often so many toms in an area, competition for hens is high. If you’re set up in a known turkey haunt, be patient and let your calls and decoys do the work. It’s not uncommon to have multiple toms come in, and typically, these birds are pretty boisterous, which makes them a riot to hunt.”

Where They Live: Found in 38 states east of the Mississippi, the Eastern is the most abundant subspecies of wild turkey.

What Makes Them Hard: Missouri native Billy Yargus is as good a turkey hunter as you will find anywhere in the country. In addition to his turkey killing accolades, Yargus is also a three-time NWTF Grand National Turkey Calling Champion and spends a lot of time each year studying the Eastern bird.

“Eastern birds get a lot of pressure,” says Yargus. “It’s not just pressure from humans, but also predators. We have coyotes, bobcats, eagles, raccoons, and the list goes on. Plus, you have so much big timber in many parts of their terrain to deal with. These birds have so many places to hide, and guys who like to roam the timber often get picked off and don’t even know it. These birds have incredible eyesight.”

When it comes to the difficulty of consistently killing Eastern birds, Yargus notes that many hunters get in too big of a hurry and get too aggressive on the calls.

“The key to killing Easterns is to do your scouting,” says Yargus. “Spend time finding where the birds are and how they use an area, and then make your move. Find an area and stay patient. If the birds are gobbling hard you can run-and-gun a little, but if they’re staying quiet, you better find a spot and stay patient. When you try to slip around on non-vocal birds, they will see you before you see them. Stay nice and soft on your calls. You don’t need to get too loud or too aggressive. The softer the better. Make that tom come look for you.”

Yargus is a huge proponent of diaphragm calls when hunting Easterns.

“I you’re leaning against a hardwood, a savvy gobbler might see you scratch that pot-and-peg or slide the lid of that box call,” he says. “Lots of hunts go bad at the last moment because hunters get seen. Mouth calls obviously require no movement and allow each hunter the ability to make a wide range of hen sounds.”

What Makes Them Easy: Yargus has hunted Eastern birds in numerous states and believes that if you find a location that has received minimal pressure and one that holds a solid population of birds, Eastern turkeys are really no more difficult to kill than any other subspecies.

“When there are more gobblers competing for hens, turkeys become significantly easier to kill,” Yargus said. “Eastern birds can be very vocal and gobble hard. If a tom knows there are other gobblers in the area, he will be more apt to hurry in and check on a willing hen. It’s important to remember that while we tease each other and joke, no turkey is really easy. It all comes down to human pressure, predation and population. I don’t care what species you’re hunting; if you’re in a low population area and the birds are constantly being harassed, those birds will be the toughest you’ve ever hunted.”

Where They Live: This bird is only found in the state of Florida.

What Makes Them Hard: Hoppy Kempfer owns and operates Osceola Outfitters in St. Cloud, Florida, and when it comes to pulling the dupe on these long-legged birds, few hold a candle to him.

“These turkeys have an uncanny ability to pick you off,” says Kempfer. “You’d better add brush around you or sit in a blind. The area we hunt them is dense and their eyesight is great—better than any other subspecies in my opinion.”

“It happens all the time,” says Kempfer. “You’ll hear a bird and because of our heavy air and dense woods, the bird will sound a lot further off than he actually his. I’ve actually watched toms a few hundred yards off through binos, see them gobble but can’t hear them. Often, hunters end up creeping in on a roosted bird. Before they know it, they’re right under him. This also happens when hunters are trying to move on bird that’s on the ground. They end up walking right on top of him. Sit down and stay patient.”

What Makes Them Easy: Although Osceolas are generally considered to be a tough bird to call in, Kempfer disagrees.

“Not much makes them easy, but if you stay soft on your calls and don’t get overly loud or aggressive, an Osceola will work just like any other bird. I call very light and very little. We also listen to the birds on the roost. If the hens are talking a lot, you can use the calls a little more. If those hens are quiet, you better follow suit.”

Additionally, weather can be the Achilles heel of the Osceola gobbler.

“When we have bad weather at night — thunderstorms and high winds — the birds sleep in. It’s my opinion the birds are actually tired. They’ve been up in the tree holding on all night, and the last thing they want to do in the morning is gobble. They stay in the tree a little longer. If we have nice calm night, they seem to really work well the next morning. Keep this in mind.”

And the Winner is…

While the argument about which subspecies is the most difficult might never be answered convincingly enough for everyone, it’s important to remember that each bird has certain tendencies that can be taken advantage of. Four species, four experts with differing opinions. I guess that leaves it up to me to decide.

Personally, I’ve been tested and teased by each of the aforementioned subspecies, and while my Western brethren will likely read this and hit the unfriend button on Facebook, I have to say without hesitation that the Eastern turkey is the toughest turkey of all. Last season in Georgia, I hunted a pristine farm for three days. I was able to solicit multiple gobbles, but never called a single bird within range. The Eastern has busted me drawing my bow in Kansas and tested my patience in Missouri. Sure, I’ve lucked into a few Eastern harvests, but in my opinion, no bird can beat the Eastern.