6 Ways to Hunt Snow Geese on Your Own

It’s a big commitment and a ton of work, but you can chase the spring snow goose migration on your own 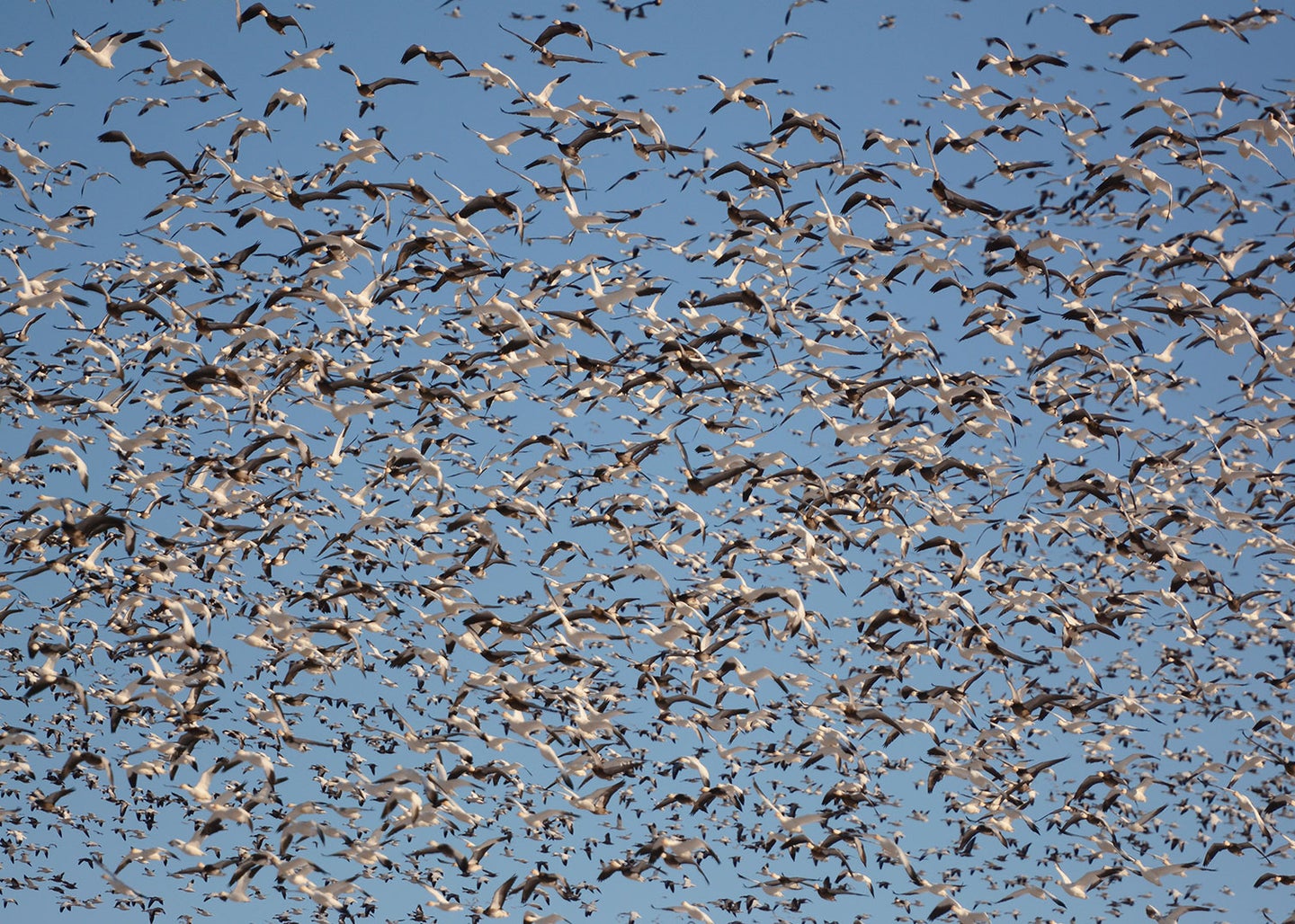 There are levels of spring snow goose addiction. At the very top are hunters with jacked-up diesel trucks pulling 30-foot trailers loaded with full-body decoys, chasing white geese from Arkansas to Saskatchewan, burning up fuel and the patience of loved ones back home. Frankly, they are half nuts to pursue these fickle/smart birds for months on end. But they aren’t as crazy (passionate is a nice way of putting it) as the solo snow goose hunter. Setting out huge rigs of decoys by yourself in dark, mud-sucked fields you can’t drive the truck into is hard work most hunters aren’t willing to do. But over the years, I have found that targeting the right fields—even when you are forced to go it alone—can pay off. Now, that doesn’t mean you’re going to make a pile every hunt, but if you play by this set of rules, it will give you a damn good chance to.

How Many Decoys Do You Need?

The answer to that question is as many as you can afford. But, since you’re a one man or woman show, take into consideration what is practical. For field hunting, full-body decoys are ideal, but they also take up a ton of space and are a pain in the ass to lug around. The better route is to buy socks and silhouettes (1,500 is about as many as I have ever set alone) in bulk. They are cheaper and lighter than full-bodies, which means you can afford more of them and also carry more afield. They don’t have the realism and detail of full-bodies, but you’re going to get burnt out quick setting 1,000-plus on your own every time. Socks and silhouettes are much more manageable. You can use 12 to 18 full-bodies on higher stakes to hide the blind. I typically brush in a layout really well or use a Tanglefree Ghost Blind and wear all white to blend in with the decoys. I run a majority of the socks and silhouettes on the upwind side of the spread to mimic snows feeding aggressively, then string out the remaining one-third of the spread below the kill hole in a long line with good spacing to make the rig look bigger than it really is.

If you have the financial means, buy several dozen Dave Smith Snow and Blue goose decoys. They are as close to a real snow goose as you can get, but it comes at a cost, which for most won’t be feasible. But they can make a big difference, particularly when chasing adult birds that have 20-plus migrations under their wings. You should definitely invest in snow flyers, which resemble a kite in the shape of a snow goose attached to long fiberglass stakes, and a rotary machine that spins similar snow kites in a circle. And you will need an e-caller, preferably one with an auxiliary jack for multiple speakers.

If you can find water, that’s ideal in terms of the work you will have to put in (it’s also rare to have the chance to shoot snows this way, which makes it fun as hell). Throwing decoys on a watershed is not labor-intensive. Use socks and silhouettes in the shallows and on the banks to round out the spread.

If you have the option, hunt a feed over a migration route or daily flight line. Snows are unpredictable, but if birds are feeding, there’s a good chance they’re going to come back the next day (as long as they don’t migrate out), so go set up on them. Just make sure you get right on the X and make the spread look just like the birds who were using it the night before. Sure, you will get burned sometimes and the birds will hit the field across the road. But that’s snow goose hunting. Feeds are productive for hunting juveniles or adults, but when the leading edge of the migration (older birds) are in town, a feed is more reliable than a flight line, because you know the birds are comfortable there. Hunting flight paths is risky because the wind could change direction and take the birds on a totally different route to a feed.

If you can’t get on a feed, then you have to get under the birds, ideally on a sunny day with a 10 to 15 mph wind. You need a good wind with a sock spread. If there’s no breeze, don’t go because socks just look like limp trash bags on windless days. Most will tell you that a south wind is best (because birds are riding it north back to the breeding grounds). Those days are good, but you don’t need a south wind to kill birds. In fact, many of my best shoots have come on a north wind, but that’s subjective to where you are hunting. The best thing to do is take the time to catalog what conditions birds fly best in your area and then pick the best days to hunt.

Patience is key to hunting travel routes. Don’t give up on sunny/windy migration days if birds aren’t flying early. They may not make it to your spread until late morning or early afternoon. It’s not like duck season when flights are more predictable. Snows are racing back to the Canadian tundra to breed, so it’s much different than birds that are going out to feed in the morning and then back to the refuge. On migration days, the key is to be south of any water the birds are looking to spend a night on, so they must fly over your spread to get there. Set up north of a refuge, and the geese may never catch a glimpse of your decoys.

Transporting All The Gear

The best way I have found to get all the gear into the field easily is with an ATV and open trailer. Many times the field conditions will be too muddy to drive a truck in, so pulling a closed trailer full of decoys is impossible. So, I have put the ATV on a trailer and placed the socks and silhouettes, which are kept in plastic storage tubs or heavy-duty bags, wherever there is room. At the field, the ATV comes off the trailer, which gets unhitched from the truck and hitched to the ATV. This way, you can transport everything into the field at once, or make a few trips, depending on the amount of gear you have.

When I first started hunting alone and didn’t have the money to afford such luxuries, everything was walked into the field (and often left the entire spread out for days at a time when hunting a migration corridor to try and take full advantage of that hard work). Fair warning, it’s grueling most of the time. You’re walking a few hundred yards (at minimum), loaded down with gear. After the first few springs of carrying all the decoys in, I purchased a cart to make transport a bit easier. The Decoy Cartz Honker Hauler is one of the best to use. You can fill it full of decoys and it’s fairly comfortable to pull or push, which is not the case for many carts.

Adult snow geese are some of the toughest quarry to kill. You’re hunting birds that can be over 20 years old. They have seen it all, season after season. And since snows can be hunted around 10 months out of the year, and are pursued more than most game whose seasons are short in comparison, they are extremely wary. Some folks will hunt adults, but be forewarned, it can be frustrating—as in, it will make you want to sell the whole decoy rig and never hunt snows again.

One of the best pieces of advice came from a veteran guide: “Once you see the first flock of spring snow geese, let another million birds fly past you, and then go hunting.” The point being is the smartest birds will come through first. Juvies are the last snows to head north, and they are also the most susceptible to being tricked into the decoys. The best seasons you will have are when there is a good hatch. You can find that information every August in the USFWS Waterfowl Population Status. That annual report will tell you the difficulty level of the coming spring season.

During the fall waterfowl season, I like getting birds in close, killing them in the decoys. It’s the main reason to go (if I was interested in pass shooting, there’s a skeet range close by). That mentality changes for snow geese. For whatever reason, snows tend to not finish in the decoys. That’s not to say they won’t, but in our experience the birds look like they are coming in hard and at 40 or 50 yards, then give you the middle finger and rise up. It could be they have seen the show of rotary machines and e-callers before—or are just a pain in the ass by nature—and flare at the last moment when you want to pull the trigger.

So, you have to be willing to take longer shots that are still ethical. With the proper choke and load, 70 yards is doable, and you can push it a little farther if birds are hovering straight overhead. But know your limitations. Find a distance you are comfortable shooting at and stick to it. And realize, it takes practice to know when to shoot into a big wad of snows. You’re likely going to make a mistake the first few times it happens. Hell, I still have trouble calling shots at times. The best philosophy for shooting is don’t wait to get flocks right where you want them. If you can kill them, it’s best to shoot. A “let’s give’em one last pass” mentality will almost always result in zero shots fired.

Should You Jump Shoot Snows?

There’s always debate around jump shooting any species of waterfowl, but there is one rule you can’t break: Don’t blow out a snow goose roost with a sneak shoot. That’s a selfish move. There are hunters leasing fields and spending cash on gear to chase the migration, and if you shoot the roost that ruins it for everyone else. Also, during the spring ducks and dark geese are sometimes sharing the same roost as snows and it’s unethical and illegal to kill them, so don’t do it. Now, if you have permission on a property and a few snows are loafing alone on a pond, that’s different—they are fair game. Whether or not you think that is right or wrong is a personal choice. My feeling on it is snow geese populations need to be curtailed, which is the whole point of the conservation season, so if I find a few birds on small water, they are getting shot. But if you are on public land or private property that is open to hunters (North Dakota is a perfect example) and there are folks hunting over decoy spreads nearby, don’t be driving around popping snow geese on every loaf pond you can find. Other hunters have spent time and money on pursuing snows and you shouldn’t screw up their day afield by pushing birds out of the area.