Wild salmon are speaking up just by showing up 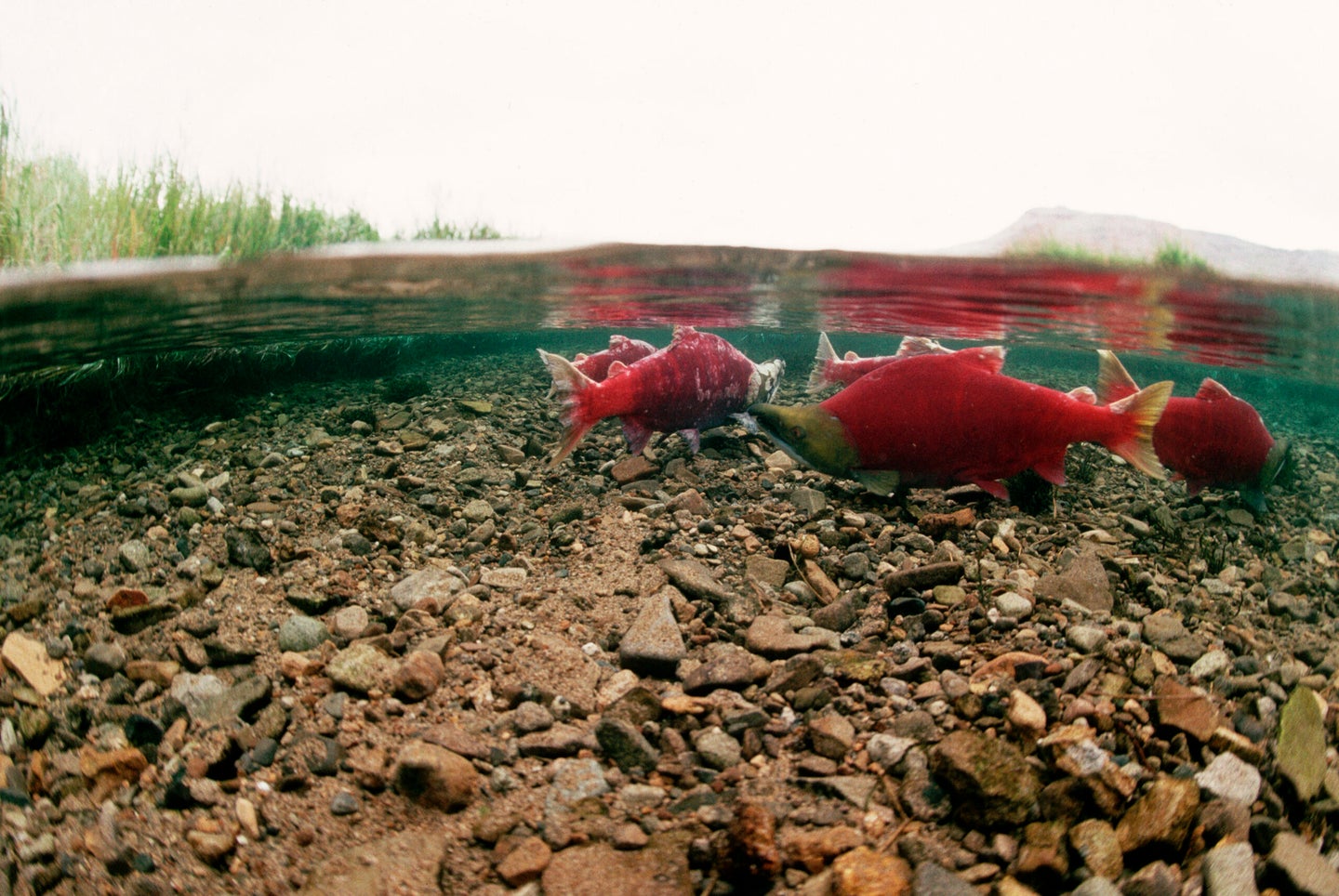 A group of sockeye spawns high up in the Bristol Bay watershed. Getty Images
SHARE

As the Environmental Protection Agency seeks public comment on its proposal to block Pebble Mine and permanently protect the Bristol Bay watershed, the salmon are speaking up just by showing up. Roughly 69.7 million sockeye salmon have returned to the Bay this summer. This surpasses the record-high run of 67.7 million fish that returned last year, making it the largest sockeye run ever documented in Bristol Bay.

Not surprisingly, this year’s phenomenal run has led to record-breaking harvest numbers as well. The Alaska Department of Fish and Game reported last week that as of July 11, commercial fishermen had cumulatively caught around 46.6 million sockeye. That’s far and away the biggest harvest since commercial fishing began in the area in 1883, and the season isn’t even over yet. ADFG predicts that around 75 million sockeye could return to Bristol Bay before it’s all said and done, and that number could go as high as 90 million, according to Alaska Public Media.

It’s almost like the fish are trying to tell us something. Maybe it’s that building the world’s largest open-pit mine at the headwaters of the world’s most productive salmon ecosystem is a terrible idea.

Waging a Decades-Long Battle Against Pebble Mine

On May 25, the EPA released its revised Proposed Determination for the Pebble Mine project under Section 404(c) of the Clean Water Act. After extensive study, the agency found that the discharge of fill material that would be required to mine the Pebble Deposit “could result in unacceptable adverse effects on salmon fishery areas within the Bristol Bay watershed.”

The federal agency’s Proposed Determination would effectively block the proposed copper-molybdenum-gold mine by prohibiting the discharge of any dredged or fill material within the footprint of the Pebble Mine site, which was last updated in 2020. This includes the South and North Forks of the Koktuli, along with Upper Talarik Creek, which are the final spawning destinations for millions of the salmon that return to Bristol Bay every summer.

“Bristol Bay supports one of the world’s most important salmon fisheries,” EPA Regional Administrator Casey Sixkiller said in May. “EPA is committed to following the science, the law, and a transparent public process to determine what is needed to ensure that this irreplaceable and invaluable resource is protected for current and future generations.”

The EPA came to a similar conclusion in 2014, when it released its original assessment of the potential negative impacts that large-scale mining would have on the watershed. Under the Obama administration, the federal agency used the same 404(c) protections to bring the project to a halt.

Five years later, however, under the Trump administration, the EPA withdrew its Proposed Determination and reopened the application process for Pebble. This led Trout Unlimited to file a lawsuit against the agency.

In November 2020, while TU’s lawsuit was still underway, the Army Corps of Engineers rejected Northern Dynasty’s application to develop the proposed open-pit mine. Then in October 2021, the U.S. District Court for the District of Alaska decided in favor of wild salmon and overturned the EPA’s 2019 decision.

As we reported last fall, this one-two punch dealt a major blow to Pebble Mine project, which a coalition of fishermen and conservationists have been fighting for decades now. But without permanent protections under Section 404(c) of the Clean Water Act, the politically charged back-and-forth that we’ve seen could continue well into the future.

The EPA’s May 25 announcement opened a public comment period that was supposed to last until July 5, but the federal agency announced on July 1 that it would extend this comment period by a full two months until Sept. 6. Comments can be submitted via mail or email, but the agency recommends using the Federal eRulemaking Portal.

The EPA didn’t give a reason for extending the comment period, but in doing so it has effectively allowed the ecosystem to speak up for itself. And if two consecutive years of record salmon runs aren’t enough to demonstrate to Pebble’s proponents the value of permanently protecting Bristol Bay, they got a more obvious hint to pack up their things and go around the Fourth of July.

That weekend, as commercial fishing fleets in Bristol Bay intercepted the schools of salmon that were pouring in, and as sport fishermen cast to fish that were swimming further up in the watershed, a wildfire ripped right through Pebble’s supply camp.

Although nobody was hurt as a result, Mike Heatwole, a spokesperson for the Pebble Limited Partnership, told reporters that the damage caused by the fire led to a “near total loss” of supplies at the camp. That included tools, wooden pallets, canvas tents, and even the metal tent frames, which, according to Heatwole, basically melted and collapsed.

Meanwhile, an unlikely alliance of fly-fishing guides, gillnetters, Alaskan natives, and subsistence fishermen heard about the fire from their respective corners of the state. And while it might be a stretch to read too far into these things, some viewed the wildfire as a not-so subtle suggestion from Mother Nature herself.