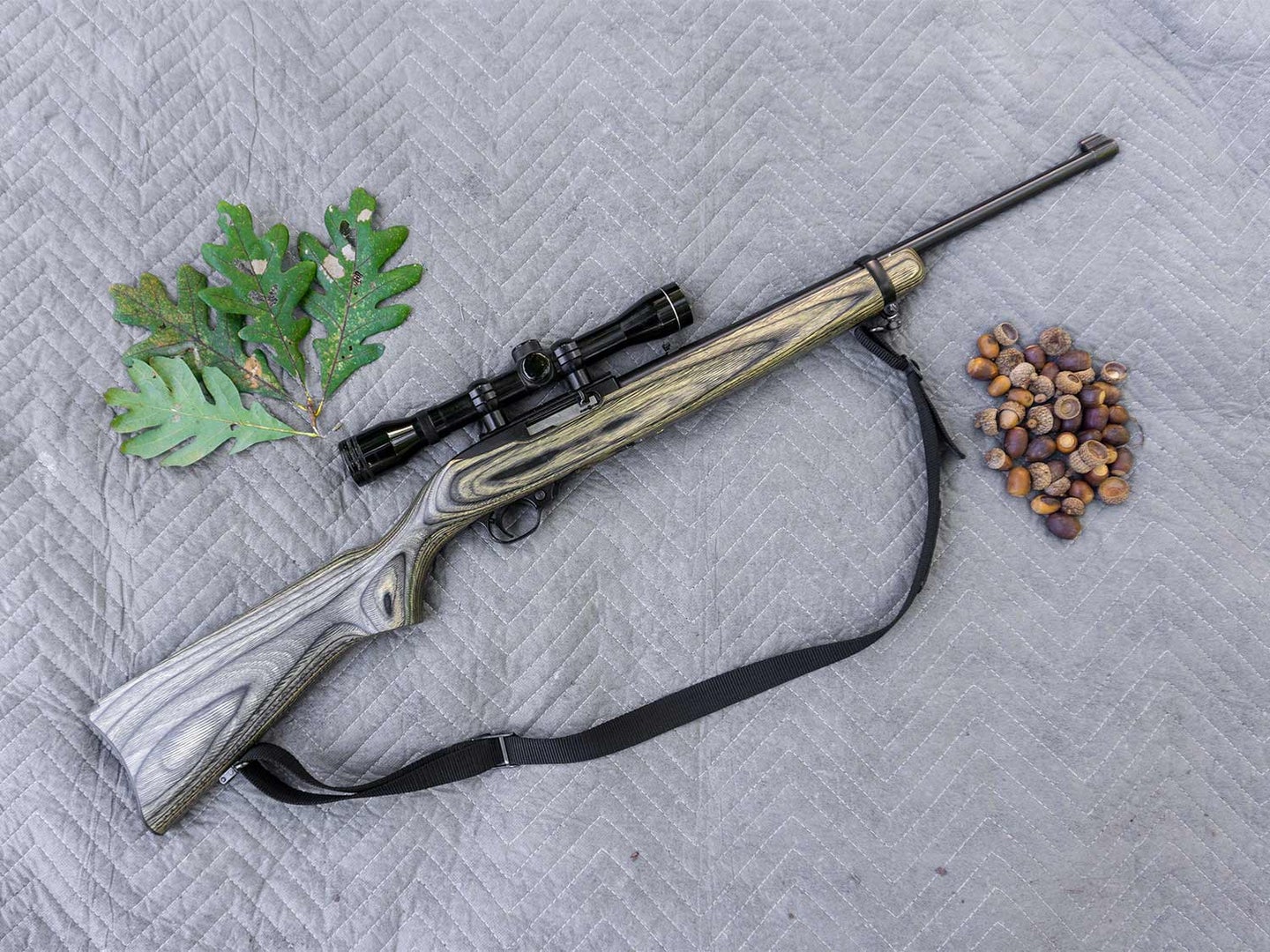 If you join a discussion on the topic of dependable camp guns, you will get as many differing opinions as there are guns available. Everyone has their favorite, and for various reasons, some of which are obvious, others are not.

What to Look For in a Camp Gun

Camp guns are usually used guns that have already had some miles put on them, but are still in good working order. They’re ideally tough, lightweight guns that can be packed in and left in camp without having to worry about them. Camp guns should also be accurate enough to take care of varmints, do some plinking, put some meat in the pot, or be pressed into service for a day of hunting. Here are a few attributes to stay on the lookout for:

Camp guns see heavy use and abuse and dependability is at the top of the heap. Your rifle must work when you need it to work and this is especially true for camp guns.

Camp life isn’t always easy. Don’t make it harder by having a complicated firearm to use. Understanding the tool that you have, is just as important as the tool itself, so a camp gun should be easy to use and practice with regularly and often.

If a firearm is hard to maintain, then it is going to be even more difficult to do so while you’re at camp. Camp guns are meant to be used hard and they don’t always get the care they deserve. Either way, they need to be easy to maintain with limited tools. Your camp gun should be able to handle all kinds of tough conditions.

So, let’s dig into my personal list of camp guns and see what we can learn from it. Each of the following has seen considerable use. We have several .22 LRs to consider, and then we’ll get into the big guns.

There are many good reasons that millions of Ruger 10/22s have been sold over the last 50 years—reliability and ease of use come to mind rather quickly. The 10/22 pictured here has a multi-colored laminate stock that can take considerable abuse. It has an added inexpensive Tasco scope. However, it has a flip-up rear sight that can be used if that scope becomes damaged or unusable for some reason. Weighing in at a hair over 5 pounds, this semi-automatic can be carried all day long without issue. Sling mounts integrated with a good sling make it even easier to be shouldered and carried. This is a fantastic small-game hunting machine.

This rifle was initially designed as an Air Force pilot survival gun, and it has served in that capacity since 1959. It is now a crowd favorite among many in the survival community. It is pictured above broken down. The barrel, receiver, and two fully-loaded .22 magazines fit into the stock when stored. This makes it easy to be stored in a backpack, toolbox, or trunk. When the butt cap is replaced, it can float as well as avoid moisture easily. But rust isn’t an issue, as the rifle is coated in ABS plastic for corrosion resistance. In a few seconds, you can put the AR-7 together and put it to use. It weighs in at only 3 ½ pounds making it a very lightweight choice.

This is another entry into the concept of a take-down .22s that are easily portable and assemble together quickly. This little rifle, a Marlin model 70P, has been a favorite for youth hunters for many years, but it also fits nicely into adult hands too. It is a well-balanced semi-auto that comes with a steel magazine and a carrying case. The carrying case is not necessary as it will stow nicely into a pack if need be. Wherever you carry it, you might not even notice it. At only 3 ¼ pounds, this is the lightest rifle in all of those listed here.

I must admit that when I handled this rifle for the first time, I did not think much of it. It felt too lightweight and of questionable quality. I was so wrong. This little rifle is a tack-driving machine. The Nylon 66 quickly became my favorite for many reasons. First off, yes, it is incredibly accurate. Its name is derived from the synthetic material DuPont created at the request of Remington. This material has high tensile-impact and flexural strength. Big words, yes, but that means it knows how to take a beating and keep on driving tacks. This has been a favorite rifle of mine to take on canoe trips for many years. It can get wet without issue. Perhaps the only downfall for this firearm is the synthetic magazine. I used it so much I wore them down quickly, so get some extra.

This is a classic and timeless rifle that continues to do what it was intended for—shoot with precision, time and time again. All the other .22s mentioned above are semi-auto, but this beauty is a single-shot, bolt-action rifle. It is designed to shoot .22 LR, .22 Long, and .22 Short cartridges. Single-shot .22 rifles like these are great for teaching new shooters the fundamentals of marksmanship and gun safety. They are also dependable and easy to maintain due to fewer moving parts.

This entry is an example of a solid, bolt-action rifle. I’ve used my Ruger M77 for hunting big game for nearly 40 years now, and it’s never let me down. It has been soaked, scratched, used for bragging rights on the range and in the field, and will continue to do so for many years. The one pictured is chambered in .243, but you can find similar style rifles in almost every available cartridge. This rifle was intended to be a whitetail hunting rifle, and it has served me well.

AR stands for ArmaLite Rifle, ArmaLite being the company that developed this gun in the 1950s. This popular semi-automatic rifle comes in .223/5.56 and is great for taking varmints and coyotes. AR-15s are designed to take lots of abuse and keep running effectively. Since it is such a popular rifle, many after-market accessories are available such as grips, forends, trigger groups, and much more. You can truly customize this firearm to whatever your needs are.

This Russian-made, bolt-action, military surplus rifle has an internal magazine and is most commonly chambered in 7.62x54r, which is both good and bad. The round and the rifle are an accurate combination, but finding ammo is getting more difficult. The reason this rifle is a decent option for a camp gun is the price. If a retailer gets in a big shipment of Mosins, you can often snatch one up for less than $200 which would be the most inexpensive large-bore rifle in this article. If you can’t afford some of the other options, then this might be a good choice.

Read Next: The Six Best Survival Rifles Under $600

This rifle has a reputation as being one of the best bolt-action rifles of all time. It was the rifle of choice for the U.S. military until it adopted the semi-automatic M1 Garand. The rifle pictured has an aftermarket synthetic stock on it which replaced a wooden stock that was too far gone for repair—another reason this rifle makes an excellent camp gun. As with a lot of military surplus rifles, aftermarket stocks are widely available and easy to install—breathing new life into these already reliable guns. Springfields are chambered in .30-06 and have a 5-round internal magazine. They can also be easily loaded with a stripper clip.

The fact that more Remington 700s have been sold than any other commercially-available bolt-action rifle is a testament to the overall reliability and usefulness of these rifles. This is an excellent choice for long-distance shooting needs. The 700 pictured above has an aftermarket stock along with a Vortex scope to offer some reach. This rifle is chambered for many different cartridges, but the .308 Winchester is a great choice.

Any 12-gauge pump shotgun is a versatile addition to camp. They can shoot anything from slugs to birdshot and should cover just about any need that might arise. The Remington 870 pictured above is a popular example that has proven itself to be an extremely reliable gun. Depending upon the model, you can get 4 or 6 shells in the magazine tube, which will add to the weight. However, if you are in need of a gun that has tremendous knockdown power, this gun can do it. On the other hand, if you need gun for birds and small game, a 12-gauge shotgun will get that job done too.