"I just swung the ice axe as hard as I could, and I felt it sink in all the way to the handle" 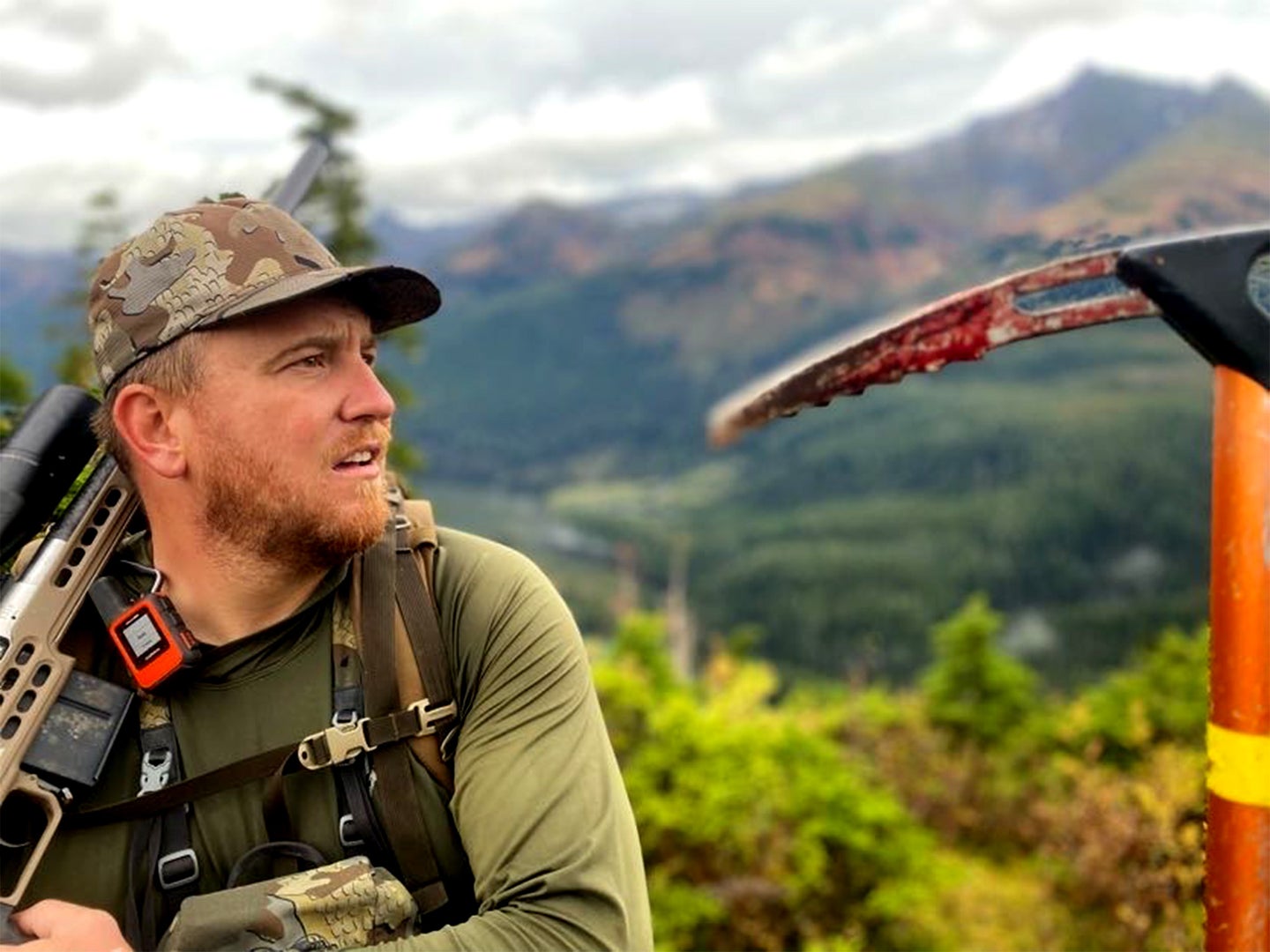 With his rifle out of reach, Clint Adams used the only weapon he had on hand: an ice axe. courtesy of Clint Adams
SHARE

Clint Adams was mountain goat hunting on Alaska’s Baranof Island last month when a brown bear attacked his party of four. Early in the morning on Oct. 15, the first day of their hunt, Adams was hiking with his friend, Matt Ericksen, his girlfriend, Melody Orozco, and their guide. They were following the guide up a steep, brushy ridge when Adams suddenly heard him yell three words that nobody ever wants to hear in bear country: “Oh, fuck. Run!”

By the time Adams realized what was happening, his guide was already running past him and reaching for the .375 H&H bolt-action rifle that was slung over his shoulder. Adams’ own rifle was strapped to his pack, and the only weapon at hand was the ice axe he’d been using to claw his way up the mountain. When the big boar chased after the guide and passed within arm’s reach of Adams, he took the ice axe and swung with both hands, burying the pointy end in the bear’s skull just behind its ear.

“I see the bear and its eyes are completely locked on the guide, and I’m like he’s not gonna hit me, he’s going after the guide,” Adams tells Outdoor Life. “But I have this ice axe, and I instantly realize that I have one swing to try to slow this bear down. He runs right past me, probably a foot by me, so I just swung that ice axe as hard as I could, and I felt it sink in all the way to the handle.”

Adams then watched as the bear tackled the guide from behind, and the two rolled down to a flat spot below. The guide was on his back trying to shoulder the rifle as the eight- to nine-foot boar reared back on its hind legs. That’s when Adams saw that the axe was still lodged in the bear’s head.

Chaos on the Mountain

Looking back, Adams knew that bringing his girlfriend on the hunt was a risky proposition. She had never been hunting before, and a multi-day goat hunt in southeast Alaska is about as far as it gets from beginner territory.

“This was her very first hunting trip, and both our families were like, ‘Hey, are you sure you want to dive into the deep end?’” he says. “I was concerned too.”

Adams explains that he’s hunted in Alaska before, and even though he’d never had a run-in with a bear, he knew it was always a risk. But he was more concerned about the grueling hike than he was about bears on the afternoon of Oct. 14, when the group caught a boat ride across the bay from Sitka. After making it to a large lake, they zipped across with their gear in an inflatable raft fitted with an outboard motor. They started hiking up the mountain that evening and climbed about a mile and a half before making camp in the rain.

The skies cleared up the next morning and they got an early start. Working their way up a ridge on their way to a good glassing spot, Adams, Ericksen, and Orozco used their ice axes during the hike, driving them into the earth and using the axes to pull themselves uphill. They were just getting in a rhythm and were only about 400 yards away from camp when their guide uttered those three horrible words.

“After he said ‘run’ I heard the bear’s deep, bone-chilling roar. Then the guide turns and runs by me, and I look up and see the bear coming out of the brush,” says Adams, who stands 6 foot, 6 inches, and weighs 285 pounds.

Read Next: Attacked on the Nushagak: When a Moose Hunter Gets Pinned by a Brown Bear, It’s Up to His Hunting Partner to Save His Life

“I look up just in time to see the bear and the guide rolling down the hill. That bear hit the guide right in his backpack and just crumpled him. When the bear turned around, I looked and saw the ice axe was still hanging out of his head.”

The impaled bear then reared up over the guide, who shouldered his rifle and fired a shot straight up into the air. Adams says he distinctly remembers seeing the muzzle blast ruffle the bear’s fur. The shot spooked the bear just enough for it to step back and hesitate. At this point, Ericksen drew the .357 revolver strapped to his chest and fired three shots at the bear through the brush.

The boar charged the guide again, and the guide leveled his rifle and shot a second time. Ericksen fired two more rounds from his pistol. Adams says they still don’t know if any of those shots even hit the bear, but they all kept screaming and eventually the bear ran off. They never saw the bear again, and although the guide reported the incident, Adams has no idea if the bear died or not. He did, however, get his ice axe back.

“After that second shot [from the guide], the bear looped down and got level with me about 30 yards away,” Adams says. “We’re making a ton of noise at that point, and it bluff charged once or twice. It took two steps forward, two steps back, and as it turned and ran the ice axe fell out of his head.”

Adams says he’s since heard from keyboard commandoes who’ve criticized the guide for running, saying he shouldn’t have put his own safety above his clients’. But the way Adams sees it, the guide reacted the best he could under the circumstances. The fact that the bear charged three times without anybody suffering so much as a scratch is the only proof he needs that the guide made the right decision.

Adams also says the whole experience opened his eyes to how gunshots help stop a charging bear. He says that because they were in dense brush in tight quarters, bear spray would have been useless, and he thinks that the muzzle blast from the guide’s rifle might have deterred the bear even more than the bullet.

“This might sound silly, but after going through that and seeing how the bear responded, I honestly would feel the most safe from a charging bear with a foghorn in my hand,” Adams says. “When I saw that .375 go off, it was not only the sound, but more so it was the air that hit the bear in the face. It was just amazing how that bear reacted when it got hit with the muzzle blast.”

He adds that, in his opinion, if you’re going to carry a pistol in bear country—which, of course, you should—your best would be to carry a 10mm Glock with a 19-round magazine and “make as many bangs as you can.”

After their run-in with the bear, Adams says the group caught their breath, decompressed, and then glassed for a little while longer. Soon enough they saw another, bigger bear higher up on the mountain, which was the only sign they needed to turn around and break camp. They made it to the lake, and then boated across for their ride back to Sitka, where they spent the night. Orozco was (understandably) still shaken up, but when Adams and Ericksen saw that the weather would only hold for another day before turning sour again, they decided to make the most of their hunt and headed back into the mountains with their guide the following day.

After boating to a different mountain lake, they hiked up and camped above tree line. The two friends shared a tent, and Adams explains that Ericksen passed out around 7:30 p.m. while he stayed up and played a card game.

“I’m still wide awake, and after about thirty minutes, he sits straight up and starts screaming, ‘Ahhh!’ and he scared the absolute shit out of me,” Adams says. “And I’m like, ‘Whoa, what’s up?’ And he said, ‘It was just a nightmare. I was getting charged by a brown bear.’”