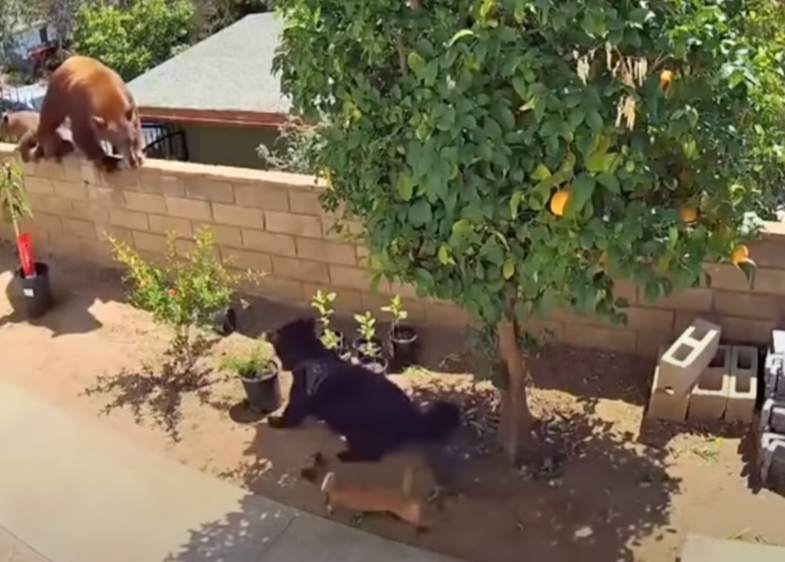 Footage from a home security camera of dogs charging a sow black bear, seconds before a teen runs out to shove the bear off the wall. via YouTube
SHARE

In a wild and chilling video posted on YouTube, 17-year old Hailey Morinico leapt into action on Memorial Day to chase away a mature California black bear that was within inches of mauling her dogs.

A home security camera in Bradbury, Los Angeles County, California, captured the brown-phase black bear sow with a pair of small cubs around 2 p.m. The footage shows the bears walking on top of a low wall around Morinico’s yard. Audio captures the sounds of barking dogs before they appear on camera.

Two small dogs and a large black dog race to the wall, scaring the cubs off. The larger bear holds her ground atop the wall while snarling and swatting at the dogs. The angry bear nearly hits the larger black dog three different times with the swipe of a paw.

Suddenly another small dog—Morinico says it’s her mom’s service dog—dashes in, running directly at the bear still perched and snarling on the wall. The bear swats at the service dog as Morinico races into the melee, comes face-to-face with the bear, and shoves it off the wall.

Morinico grabs one of the small dogs and runs back into the house as the bears disappear over the wall. Morinico says she suffered only a small scratch, and the dogs are fine.