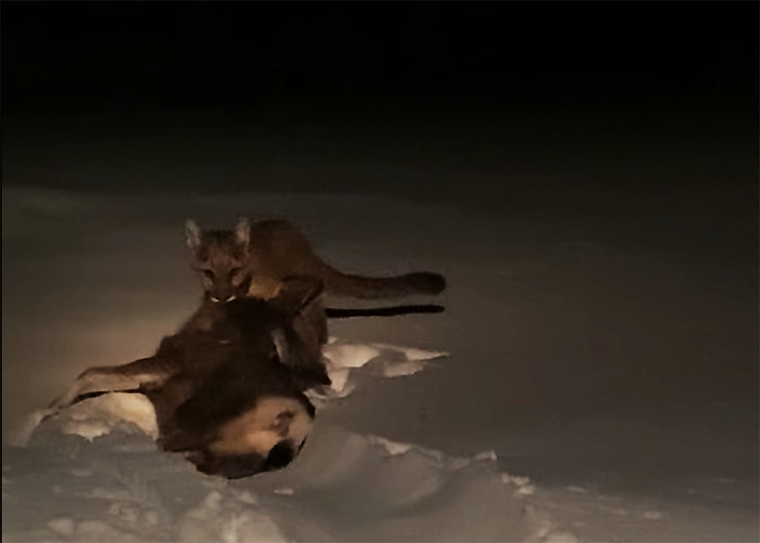 Jessie Davis of Hermosa, Colorado, got the surprise of her life when she looked through her blinds to see a mountain lion attacking a young mule deer that had been hanging around her home for several months.

“It was an amazing thing to get to experience,” says Davis, who then watched the cougar drag the deer 100 yards to a neighbor’s property. Over the next few days, she spied the lion feeding on the deer. She recorded the video above on her phone as the lion dragged the dead mule deer through the snow. Davis and her husband later tracked the attack through prints in the snow and found lion strides as far as 20 feet apart.

Joe Lewandowski, spokesman for Colorado Parks and Wildlife, told the Durango Herald that Southwest Colorado has a healthy population of mountain lions, which rarely attack humans.

“As this video shows, deer are the favored prey of mountain lions,” Lewandowski said. “They do most of their hunting from dusk to dawn. And groups of animals, such as deer or turkeys provide an invitation to mountain lions … Those with hobby livestock should also make sure the animals are in fully enclosed pens or buildings. Lions have been known to jump 8-foot-high fences.”

Based on the athletic ability of the cat in this video, it seems like an 8-foot fence would be an easy obstacle for a mountain lion to clear.