It’s selfie season with wildlife in National Parks, and tourists will be fined—or mauled 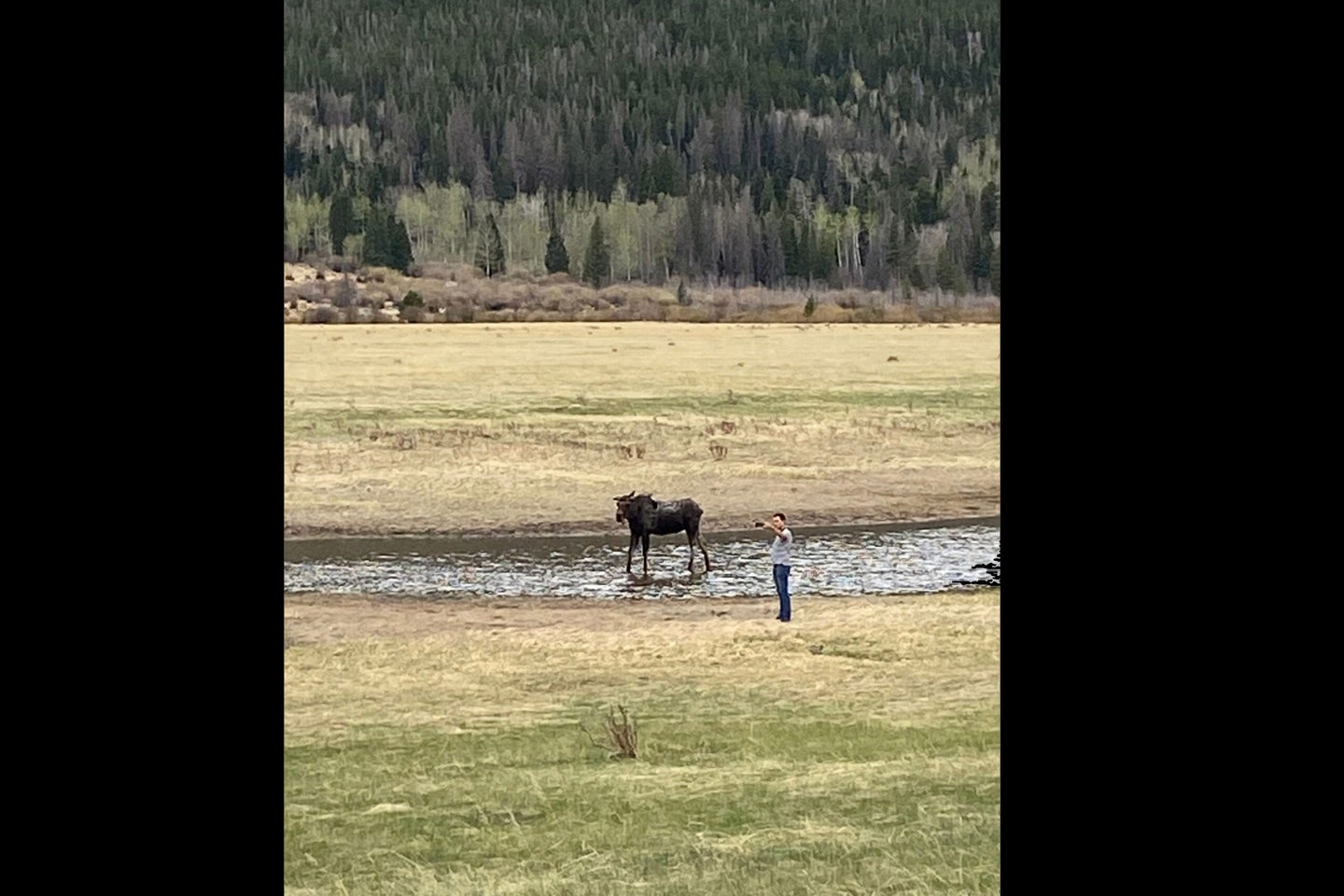 Northern Colorado’s popular Rocky Mountain National Park is open and throngs of visitors are touring the region enjoying the warming days of spring and the incredible wildlife that live in the park. Unfortunately, some of these tourists have no knowledge or understanding of wildlife. And many are unaware of park rules for observing the wild and potentially dangerous animals that live there. The era of cellphones and social media has seemed to make this problem only worse.

That’s the takeaway from a recent picture of a man shooting a selfie with a young bull moose close in the background. The picture was posted on the RMNP Facebook page with the question: “What is wrong with this picture?

a) The park visitor has illegally approached wildlife

b) The park visitor is in a closed meadow – a meadow that is closed this time of year to protect wildlife!

c) The young bull moose is demonstrating his concern by laying his ears back.

e) All of the above.

If you didn’t choose “all of the above” we’ve got problems. Anyone who is familiar with wildlife can see that this man is flirting with a good stomping from that young bull.

“All wildlife in Rocky Mountain National Park are wild animals and they should be given respect and space to be … wild,” the post continued. “If an animal is reacting to you, you are too close. For moose and bears, keep back at least 120 feet. That’s more than two school bus lengths.”

Facebook reactions to the scene were blunt and harsh, including some stating that the man should be fined, jailed, and even tranquilized with a dart.

From bears to bison, moose to elk, wild game are just that. In fact, many big game animals living in parks have lost their fear of man and are more dangerous than very wild ones that have never seen a person.

National Park visitors are wise to keep their distance from all animals. Because even if you don’t get stomped or mauled while trying to take your selfie, there’s a good chance you will be fined. Last year a woman was fined and did jail time for getting too close while filming a grizzly bear in Yellowstone National Park (which you can see in the video above). People who purposefully get too close to wildlife face fines and jail time that vary by park but can be as high as $5,000 or six months behind bars, according to a report by USA Today.

Don’t be one of these folks. And if you see ignorant tourists getting too close to wildlife in a national park, report them.