Earlier this winter, I wrote about how the Land & Water Conservation Fund helps secure access for hunting and fishing,... 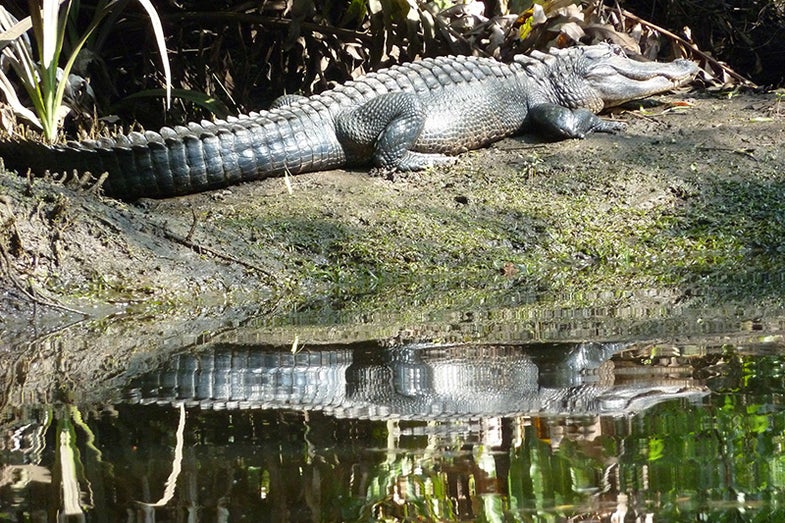 Earlier this winter, I wrote about how the Land & Water Conservation Fund helps secure access for hunting and fishing, such as the fishing access site where my son and I go ice-fishing. More recently, we used LWCF to find places to go fishing in the sun – and watch an alligator.

Spring break brought us to the Loxahatchee River near Hobe Sound, Florida. We poked around state parks and national wildlife refuges, casting for snook and sea trout. Once we adjusted to the heat, Florida had some up-sides compared to keeping ice off the line back home in Montana.

Hobe Sound, near both the Wild & Scenic Loxahatchee River and the Indian River, is said to be one of the most biologically rich and diverse estuaries in North America and I believe it. Besides a mind-boggling array of freshwater and saltwater fish, splendid birds like swallowtail kites, we also saw manatees, and alligators. We even saw some of those feral hogs we’ve been hearing so much about up North. I felt a little like Dorothy stepping into Oz.

But Florida is also attractive to people as well. It’s a testament to conservation that Florida has still retained so much of its jungle, scrub, and swampland habitats relatively intact, when you consider that it is the third most-populous state, after New York and California. Florida has about 20 million people and it’s clear many of them own fishing rods.

Which got me curious. How much did the Land & Water Conservation Fund help America and Florida maintain its wild country in the face of decades of breakneck economic growth and development?

According to the LWCF Coalition and federal records, conservation, recreation, and access efforts in Florida have received $1 billion in the past 50 years from the LWCF. That equals thousands of acres of everglades, bayous, and backwaters conserved.

That’s a big investment for the 2.8 million hunters and anglers who enjoy Florida every year. Remember, LWCF is funded by off-shore oil royalties, not tax dollars. The hunting and fishing heritage of Florida is a testimony to the wisdom of LWCF.

In theory, LWCF should generate $900 million annually for conservation. However, The Trump Administration’s initial “skinny” budget would slash funding for the federal portion of LWCF projects, cutting about $120 million or 75 percent of funding for federal projects like wildlife refuges and national forests.

That said, LWCF does have strong bipartisan support, even in today’s hyper-partisan atmosphere. It’s likely that key Congressional leaders will want to restore at least some of that funding for projects in their districts. In addition, there are bills gaining momentum in both the Senate and Congress to permanently reauthorize LWCF, which is set to expire in 2018.

Our trip to Florida reaffirmed my belief that the LWCF is a critical tool if we are to maintain America’s hunting and fishing traditions, and that sportsmen cannot afford to stay out of the swamp when it comes time to defend it.